Talk about the mods or features you'd like to see in Daggerfall Unity. Give mod creators some ideas!
Post Reply
40 posts

Maybe you could bring 3 parts of the desired material and the smith can craft something based on that material...
(or sum of mass/weight + offset).
Lore wise of course you must ask how the smith knows the craft of "dwarves2 who don't exist anymore... maybe you could provide a certain magic item that enables the smith to copy the craft. "The Orb of Excellence" which lets it's user imitate any style of crafting.
Top

BansheeXYZ wrote: ↑Thu Oct 17, 2019 1:29 am
Shopkeepers who sell clothing aren't tailors. Most RPGs will let you sell back food and clothing so you don't have to litter the ground with unsellable stuff. And it's not entirely unrealistic in a medieval setting where all clothing had to be made by hand without modern machinery. Good clothes were not the omnipresent throwaway items they are today.

Many of the clothing stores literally have "tailor" in the name. Littering isn't really a problem in Daggerfall, since dropped items get wiped when leave the area. I agree that it's realistic that someone would want to buy your clothes, but its honestly such a small part of the game with so small amounts of profit that it seemed like the most natural place to stick in the tailoring mechanic without having to implement extra NPC etc.


BansheeXYZ wrote: ↑Thu Oct 17, 2019 1:29 am Minor realism mechanics across games varies wildly. Some RPG vendors have a limited amount of gold with which to buy your loot. Some RPGs have hunger management. Daggerfall doesn't. Most RPGs don't bother with hunger and hygiene and make them implied offscreen events. Fantasy games are a kind of escapism, after all, and any tedium you keep in the game can't overly impact play. Finding nothing but sized apparel and armor that usually doesn't fit you enters the realm of bad reality. Being able to buy loot you can't find ruins the loot discovery system. Being able to custom enchant everything because you can't find it reflects a bad loot system.

True, but fixing the loot system seemed like a much bigger job, and it might ruin the feel of the game if you started getting too lucky. In addition, with how easily you break the economy of the game, this would be a nice money sink. Buying custom made deadric armour should cost a really extravagant amount of money.

Alternatively, you would need some other items in order to make the armour. So it worked more like alchemy. You'd have to find "Lump Of Dwarven Metal" to use for making one Dwarven item. But then you allmost have a crafting system and I sort of hate those. Nothing makes an RPG more of a lootcentric grind than implementing a crafting system.

DeltaOfPie wrote: ↑Thu Oct 17, 2019 3:48 pm Maybe you could bring 3 parts of the desired material and the smith can craft something based on that material...
(or sum of mass/weight + offset).

That could work. So to make one deadric item, you'd have to "pay" several deadric items. Or an equivalent, or higher, combined weight?

And it stops you from easily buying your way up the loot table. You have to actually get a couple of drops of the right material in order to convert it to a new one.

Of course, just having it be really expensive would achieve much the same.
My released mods

What I'm thinking is something more special utilising the world data system to create unique shop(s) in the world which have an armourer capable of forging new high end armour pieces to order. This would not be the way the game would start, you would need to complete a special one time quest from the FG (and KOs?) to rescue a master armourer from captivity (bandits, orcs?) safely. Once you have rescued them, they would owe their life to the PC and would offer to set up a workshop in a region the PC can choose from a shortlist. This would convert a single armourer shop to a unique version, with an armourer and a shopkeeper. The player would then be able to go to this one shop to order custom armour pieces, supplying enough raw materials (other items of that material) and the price will be a bit more than it would cost to buy in a shop normally. Probably take a while to complete as well.

This will introduce special buildings (that are not dungeons pretending to be buildings) to the world of Daggerfall for the first time. I think I can pull it off, but may be mistaken. It will require being able to define new RMB blocks I suspect which is not currently possible. Also I'll need to create a system for conditional world data overriding too. Is the idea worth the effort I wonder? I think being able to have the world react to player actions would be really cool, so probably do conditional overrides regardless.
See my mod code for examples of how to change various aspects of DFU: https://github.com/ajrb/dfunity-mods
Top

Oh wow, yeah. That would be really cool. Perhaps a bit more work than my original idea entailed, but I am always positive to mechanics that introduce permanent changes to the game world. That is often what the Elder Scroll games lack the most.

I have been thinking of ways the actual smithing could be done mechanically. And one way would be to use the existing Item Enchanting menues. If you take that menu and have it only accept armours and weapons. Then instead of magic effects you get a list of armour pieces and weapon types. The material is based on the armour/weapon item you are "enchanting". The price is twice the buying price of the target item. So bascially what you are doing is editing the values of an exisiting item. For example: "Enchant" an Ebony Greaves with "Boots", turning it into Ebony Boots. The cost is what you would pay in a shop for 2xEbony Boots

Another option (or you could combine it with the first idea) is to have the smith be a quest giver where the reward for all his quests is the item you want. You could have ranks with him so it starts out with mundane task to get the materials to make Elven items. Then Dwarven etc. You could simply call all the quests "Smithing a <material> product" and have the quest-picker menu permanently active for his quests so you could choose the quest that gave the correct material type as a reward.
Is it possible to give several quest rewards and have the player only pick one? If so the quest reward for "Smithing an Ebony product" would be a reward screen with all Ebony armour pieces and weapons that auto closes when you move one of the items into your inventory.
My released mods

By the way. An alternative to changing an existing shop, could be changing a homestead/farm. Those are used way too little anyway, and it might be kind of fitting to have this master craftsman living by himself on a farm.
The quest could even be not rescuing him, but figuring out where he has gone into retirement after he became too popular and some noble attempted to imprison him to make items exclusively for him.
Or, you could be rescuing him from the noble and the farm is where he goes into hiding.
Edit: Thinking about it, that makes sense. After you finish the rescue quest he could ask you for advice on where he would be safe and you get a list of locations where he could be placed.

This could be a FIgters Guild and/or Knights Order quest. But it could also be a merchant quest. Which gives som real incentive to do those quests instead of just grinding guild rep.
My released mods

Quite like those ideas, maybe not on his own exactly, but in a small nowhere place rather than a big city. I already found a block that has a armourer building that's configured like a house. Might use this, but other suggestions are welcome.

Started implementing the world data variant system tonight. This will allow mods (& quests) to have triggers that change the world by switching to different world data. This will allow just the specific block in a particular location to change, unlike the normal override blocks which replace every instance in the world.

Should be pretty cool, right?

How I feel when Hazelnut brings out a massive new feature and downplays it: 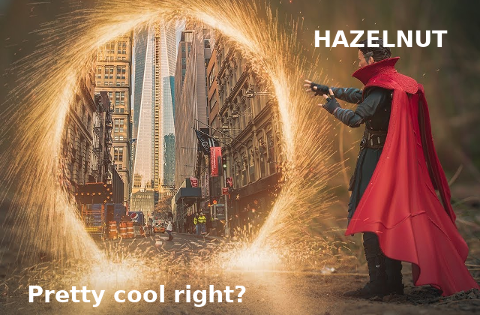 Haha. Well at least someone's excited. I definitely hope being able to make small changes to the world with mods is going to enable some cool stuff for sure.

Now all I have to do is finish it before Outer Worlds is released on friday.. that kinda snuck up on me! I suspect I'll be busy playing that for a while once it drops.
See my mod code for examples of how to change various aspects of DFU: https://github.com/ajrb/dfunity-mods
Top

How are you going to let the player know that there is a quest like this?
Maybe a book or "tales the smith randomly tell"?
Top
Post Reply
40 posts