Talk about the mods or features you'd like to see in Daggerfall Unity. Give mod creators some ideas!
Post Reply
4 posts • Page 1 of 1

Another idea, that would be geared toward hi-level characters that have nothing to do with their millions of gold pieces. It would be of course very expensive, and should be something you can get only from nobles/royalty (maybe a npc in the 3 major houses at Daggerfall, Wayrest, Sentinel would grant you a "nobility title", given your reputation amongst nobility and that royal family/faction is high enough. From there, you would have a list of places to chooses (say Daggerfall would give castles in High Rock, Sentinel in Hammerfell, and so on...). Castles for sale would be something rare enough, one by region at most.

The idea would be to allow the player to own a castle, with NPC friendly guards (you could choose the class), some merchants and services (a smith, beds of course, a cook, a court wizard (magic items / soulgems / teleportation / summoning ?), a couple of trainers (master-at-arms, wizard, scholar...), an alchemist (make/buy potions), a chapel (choose your favorite god) with a healer...

Also, maybe an arena / jousting list where you could bet on NPC fights (after all, the original game is named "Arena"), or fight yourself against multiple leveled enemies, to spice the things.

To make it more interesting, you might start with a simple dungeon, then could upgrade to a keep, a castle, and maybe even a small village / farms around it (giving you access to more services, and maybe the right to collect taxes).

Seems a bit crazy and a lot of work, but could be a nice achievement in late-game.
Top

I really like ideas like this one, they could add a lot to the game. Hope someone would consider this
Top

I have an idea about how the upgrade system could be implemented, but it would definitely take a lot of work.

So you could create a basic castle WorldData block, and a bunch of variations with different upgrades, and tell the game to switch to the appropriate WorldData block when you acquire each upgrade.
Released mods: https://www.nexusmods.com/users/5141135 ... files&BH=0
Daggerfall isn't the only ridiculously intrincate fantasy world simulator with the initials DF that I make mods for: http://www.bay12forums.com/smf/index.php?topic=177071.0
Top

Thanks for the input ! I would be glad to contribute to such a project, but I'm new to this and don't know where to start. I have limited coding experience in C++ (DFU is in C#). I can make decent models in Blender, but have no idea how to export them, how to set collision boxes...

I guess the first step would be to add custom locations to the game (the land on which the castle will be built). One location by region would probably be enough, and maybe none in very small regions. To start with, I can imagine a Motte and Bailey like this (those were the first feudal castles in the early Middle-Ages) : 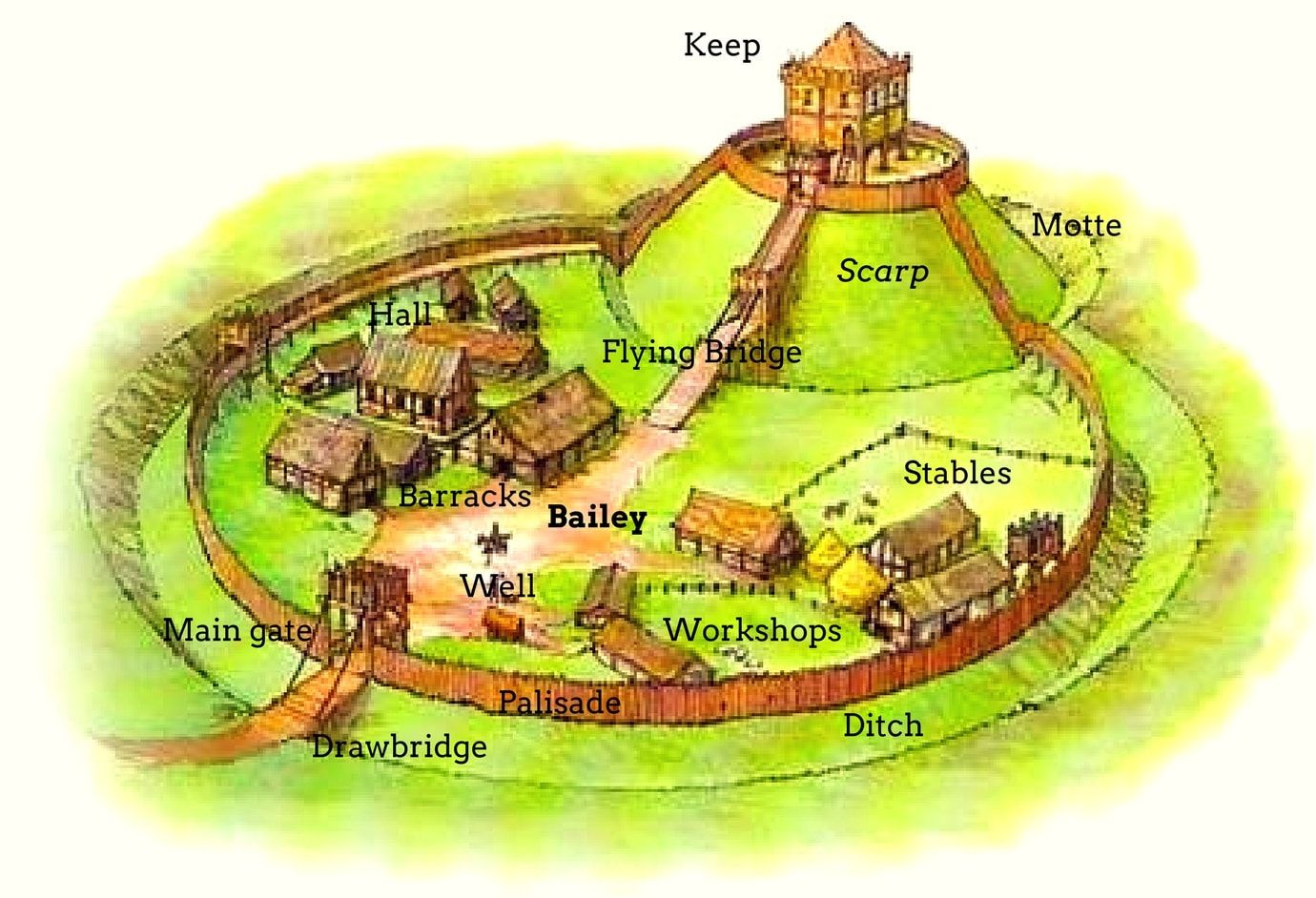 A simple wooden tower with a trench, a stockade and maybe a couple of buildings (for the soldiers - the point of the castle is to etablish a military presence - / for the peasants - the soldiers and servants need food ! - / for the servants - because someone has to cook the food, clean and repair the place, provide basic services for their Lord like stewardship, also you need stables for your horse and a squire to take care of him ! -).
Top
Post Reply
4 posts • Page 1 of 1