Talk about the mods or features you'd like to see in Daggerfall Unity. Give mod creators some ideas!
Post Reply
3 posts • Page 1 of 1

Always bothered me in the original game that despite half the game taking place in Hammerfell, most NPCs and all enemies you encounter are Breton (at least, they are white, maybe also Nords or Imperials, if you count them as race) and very few NPCs outsider of town streets are actually Redguard.

It would also be good to see more Redguards among static NPCs you encounter in shops, taverns and houses. There are some, but very few, which is especially strange in Hammerfell provinces.

Of course, the ideal mod would also add more Redguard culture and items to the game - starting from scimitars and more Middle eastern style clothing, all the way to Yokudan pantheon temples and more, but that's like a long term project, I would be happy with just enemies and more NPCs. 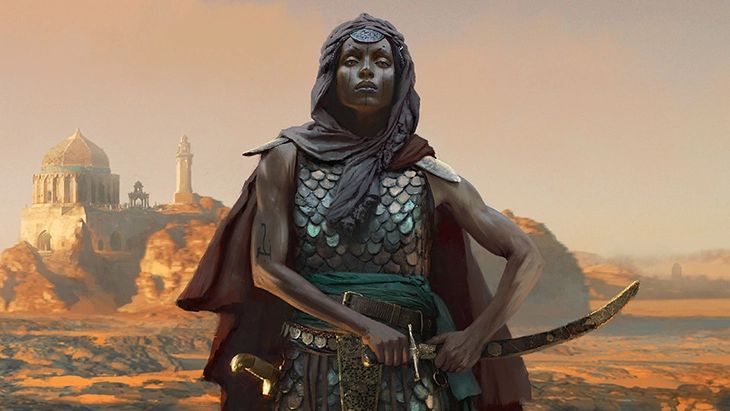 Re: Idea: Redguard enemies (and NPCs and more?)

I don't even know if its possible to give human enemies more variants beyond the male/female ones they already have but I hope someone figures out a way because this is a great idea. It's always bothered me a little that even in Hammerfell all the enemy NPCs are light-skinned.

Something that I'd also love is if someone figured out a way to fix the name generation for buildings in Hammerfell. It's always a little immersion-breaking when a quests asks you to do something along the lines of "find M'ej'kern at the Woodcroft residence in the Rlech Farmstead"

Also, I love the idea of Redguard weapons. It always struck me as odd that Daggerfall includes several Japanese-inspired weapons and yet no Middle-Eastern/North-African inspired weapons or armor despite having roughly half of its landmass inspired by the Middle-East and North-Africa
Released mods: https://www.nexusmods.com/users/5141135 ... files&BH=0
Daggerfall isn't the only ridiculously intrincate fantasy world simulator with the initials DF that I make mods for: http://www.bay12forums.com/smf/index.php?topic=177071.0
Top

Re: Idea: Redguard enemies (and NPCs and more?)

It is possible as enemy varients have already been done before in Warm Ashes and Villager variants are being made for VIO.
Top
Post Reply
3 posts • Page 1 of 1