Show off your mod creations or just a work in progress.
Post Reply
187 posts

Hi! First of all thank you for making this already great game even greater

, Second -and im sorry for my ignorance on this issue- how do i install the github zip to dagunity? I really look foward to all of this, incredible how much a game can change and polish with such a talented community .
Top

Dodge mod is in final state for now. I'll see how hard it will be to transfer over to 10.22. Once I get transferred over, I'll put out a compiled version. I'm hoping tonight, but probably some time tomorrow. With my changes to movement during combat, the dodge mod gives combat a more responsive, real life feel over the old school bobbing in and out to try and kite endlessly. I find myself standing and waiting for the enemy to make a move, or even moving a little to try and fake the enemy into coming at me to attack, so I can then feign and hit them and then dodge out of range again.

At this point, I'm moving on to the part I think will be hardest, after the whole smoothing animation system, and that is a shield system.

As of now, I'm thinking the way I can create a shield system and have it modular is by creating a script that is also a game object that represents the shield, attach that to the parent object(Player or enemy), and then offset it to simulate a shield and its movements. However, this will also require some type of asset import or I may have to use the unity 2d sprite renderer to get in some form of shield cifs/images that show for the player. This should be fun.

Once a very basic shield system/structure is in place, I plan to go back to working on seeing if I can turn the smoothing into a stand alone mod file; I haven't seriously examined this area yet, but now that I have a better handle on the object coding, I'm hopeful maybe I can do something without shredding the base script. If a worst case scenario comes about, I'll make any vars I need to use public and see if I can get this pushed into the main build, so it can be a stand alone mod.
My Daggerfall Mods: l3lessed Nexus Page

Okay, combat overhaul is moved to latest github version, which is 10.23.

I've finally set it up as a proper fork of the master github, so future updates should be easy to integrate, until I can transition this into a mod, if possible.

Forget that. I fubared my repository directories. I have to remerge 10.21 with 10.23. I'll do it some time tomorrow. I'm done for the night. I need to play games, and actually do some fun stuff.
My Daggerfall Mods: l3lessed Nexus Page

Okay, I've created a proper fork of the main master github so I can easily keep the project up to date with the coming base updates. Here is it. It has been updated to 10.23.

Okay, started the shield module. I have decided to mimic the fps weapon system for the player to keep it as inline with base feel and engine. I was able to pretty quickly import in a basic png shield image I found and added a transparency layer too. I think tied that to the fpsweapon sheath state, so it only appears when in combat mode, like the weapons. Here is the very first attempt. 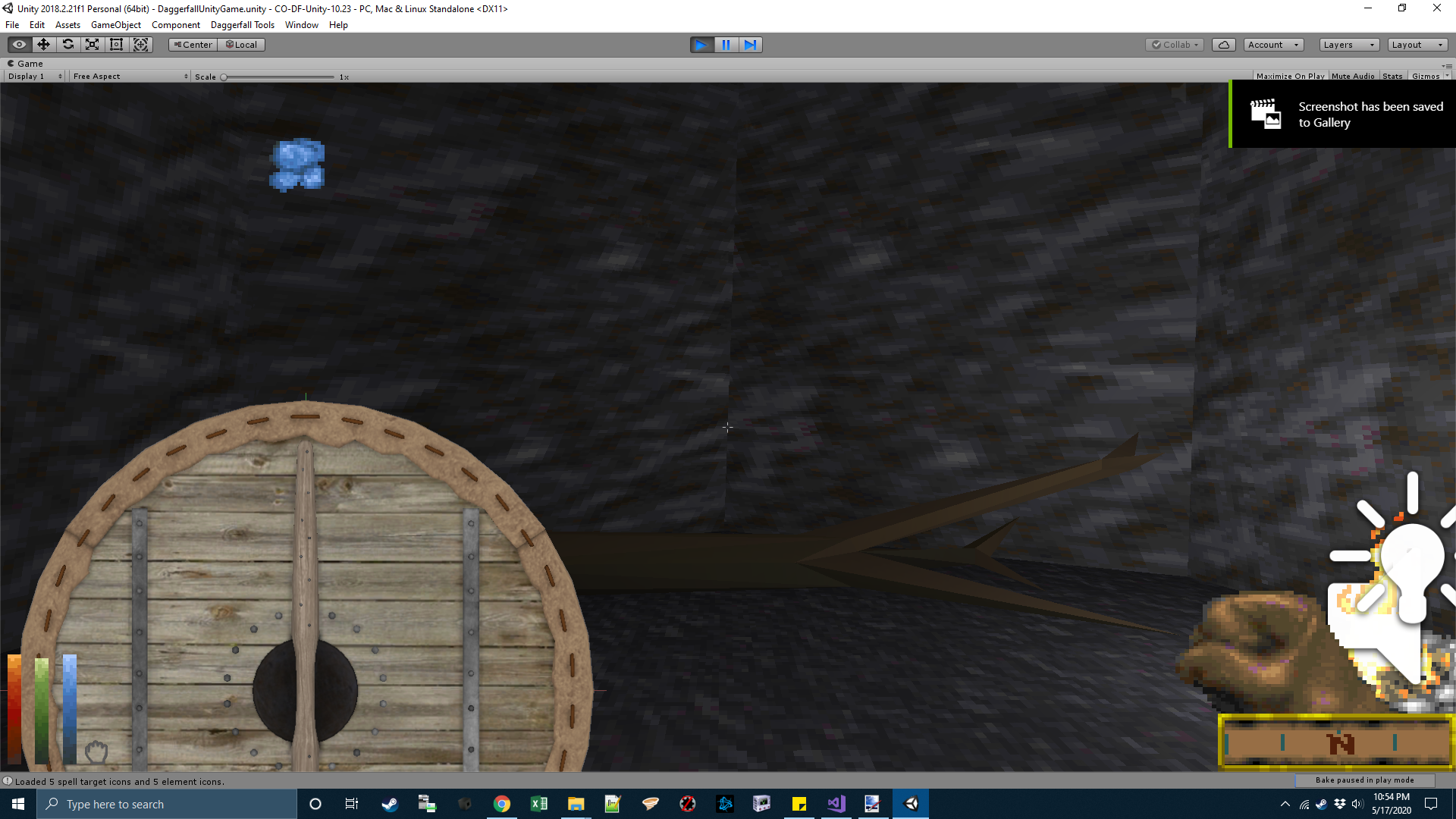 Now, to use the melee attack hand/arm images, paste them on to the back of the shield, add a bob effect, a raise and lower effect, and then the actual block code itself can be done.

At some point, I will need the assist of a good artist, if people want more than a single shield image for the shield. I am not an artist, and can only use what I can find for free online.

As of now, this is a stand alone mod, and I plan on keeping it that way.

Whenever I get to enemies, they will have to have a object attached for a shield, since the model is just one redrawn cif/image.
My Daggerfall Mods: l3lessed Nexus Page

Sorry to be a pain, but is there a compiled version of this floating around somewhere? I can't seem to wrap my mind around Unity to do it myself.

No problem. I'll try to actually get it up today, now that it is moved to 10.23, and the dodge and outfit modules are at a finished state for now. I keep saying I will post it, so you aren't being a bother.
My Daggerfall Mods: l3lessed Nexus Page

Much obliged. It's lookin' great from what I've seen.

While waiting on stuff to do online for work, I spent the afternoon working on some scripting, specifically more lerping scripts. Lerping calculations are going to be needed more and more as I add more custom features and artwork.

The end result, I crafted a nice lerping script that allows you to set the duration of the lerp, the start value, the end values, the start time to begin the lerp at any time point you wish within the calculation range, a math function selection string to select the graph style you want, a loop trigger to have it reset to 0 and loop endlessly (until you switch it off), and a breath trigger to allow you to create smooth back and fourth movements (won't reset it to 0, will minus backwards to 0 before moving forward again). I plan to expand this out to every lerp function unity has, aka vector3.lerp, vector2.lerp, ect. This way, modders will have an easy script hook to download and plug into their mods for easy use. Also, will be critical in quicker coding when I begin moving to the enemy AI, and including these features into how the enemies fight.

I'm going to compile a script hook file with a number of the custom script tools I have created for my use, and I will add this to it.

I was then able to easily plug the lerp calculator script into my UI Rect positions and make them smoothly move however I wanted. I used this to throw together a bob effect in under a minute. Starting to look like a proper fps shield, outside the stock artwork look. Next up, creating block and attack animations for it using my lerp calculator script.

So long term bug has been found, but I will move past it, as it will require larger work on fpsweapon script file. I need the get more access to the fpsweapon script to resolve it and am looking into possible routes. It isn't script breaking in anyway though, just the bob animations are not tied causing little unnatural looking bob at times between the shield and weapon.

Going to ignore any artwork work too for now, since this is a weak area of mine.

I will move directly to coding the rudimentary bash, hold block, and blocked attack animations and mechanics.

Once I get a basic setup/structure going, with animations, I will call it done for now.

At that point, I want to move to working on the base fpsweapon script, with the lucas direction, to open it up for safe modding manipulation. That way, I can move this into a stand alone mod, and also open up more mod possibilities for others.
My Daggerfall Mods: l3lessed Nexus Page