Show off your mod creations or just a work in progress.
Post Reply
239 posts

I started playing again, same game but I can switch off hand and it shoots the bow..
The fist shows up, but after the first swing the bow shows up and I start shooting it but the key thing is I can switch hands again without having to go to melee..
So I don't know "if" you're supposed to be able to use your fist that ain't working but at least I can shoot the bow in both hands...

I hope that means something I'm still looking for a shield
Check out my YouTube Channel!
Top

For sure, there is a large bug in equip state for bow. I didn't really pay close attention to bow code/use when making this, and as a result, the way it is setup is causing the scripts the get confused about which scripts to turn on and render and which ones not too when equipping bow. This also lead to a null reference error when switching to melee at times. I've resolved the null reference issue, but in the process, found a ton of other issues I completely overlooked in how the scripts are interacting in my mod and base engine.

I have some coding solutions in my head, but I'm trying to decide how I want the mechanics right now.

Do we want the bow not rendered completely so you can use both melee hands? Or, do we want some form of a hybrid, if I can do it, where, when you stance switch, the bow still shows, but the offhand appears? Maybe, even an arrow to mimic arrow stabbing in melee?

The hybrid model would be more realistic and immersive, but take more work, including setting up some custom weapon rect states for the bow in the stance in my rendering scripts.

For now, I'm going to just revert it back to vanilla mechanics, where when you switch, it merely renders melee again. However, do we want both hands, or only one?
Last edited by l3lessed on Tue Nov 03, 2020 11:01 pm, edited 1 time in total.
My Daggerfall Mods: l3lessed Nexus Page

I think it's more classic with just one, most people will be more used to it, but if you've got some cool ideas why don't you try it and see what happens ?
I'm for good gameplay, so if yours would the cooler I've got no problem with it, I don't think anybody else would either...
All I really do know is it's probably going to look corny if you're shooting a bow in your other fist is just sitting there..

Why don't you do both: just put an option in the mod settings to stay with Classic bows or not, or your new ideas ?
Pretty much everything with Daggerfall Unity mods his modular anyways, and if it ain't working/ while your refining it we can just turn it off.
Check out my YouTube Channel!
Top

For sure doing classic setup option for everything I can, including the duel wielding being removable.

After that, if I did add a bow + offhand render improved option, the bow sprite would not have an arrow loaded. The bow animation has a single frame at the end, without an arrow loaded. I can pull that one, so you are holding a bow, but not with a loaded arrow, then render the offhand however we want.
My Daggerfall Mods: l3lessed Nexus Page

l3lessed wrote: ↑Tue Nov 03, 2020 10:58 pm For sure doing classic setup option for everything I can, including the duel wielding being removable.

After that, if I did add a bow + offhand render improved option, the bow sprite would not have an arrow loaded. The bow animation has a single frame at the end, without an arrow loaded. I can pull that one, so you are holding a bow, but not with a loaded arrow, then render the offhand however we want.

Okay so you're using your fists not your bow I get it, you just got it out while you hit stuff.
Yeah that sounds cool, should look pretty good as long as the bow just stays there and the fist still works..


What else can you do with the fist ?
I thought it was just going to look like vanilla hitting stuff but it's cool let's see what you got..
There's not that much animations, and I can't tell if the smooth animations changes it, plus there's the thing with the dream mod..
Have you checked it out ?
It doesn't seem like it works with the pretty Sprites there might be some kind of memory limit since there is two hands rendering not one (The right-hand renders fine, left hand is a big block but you're still hitting stuff it's just a big white square).
I actually don't mind using vanilla but some of the handheld stuff from dream is pretty good and it's going to give this more compatibility, you should check it out sometime see what you think..

Hi, Ive remade the shields mostly manually as my AI upscaling ceased to work long ago...
I quite like the results. I hope its useful for you. They might need some tuning but I need to see them in game to be able to decide on that. The bright parts might be too bright etc. How to get em ingame, is it possible?
Spoiler! 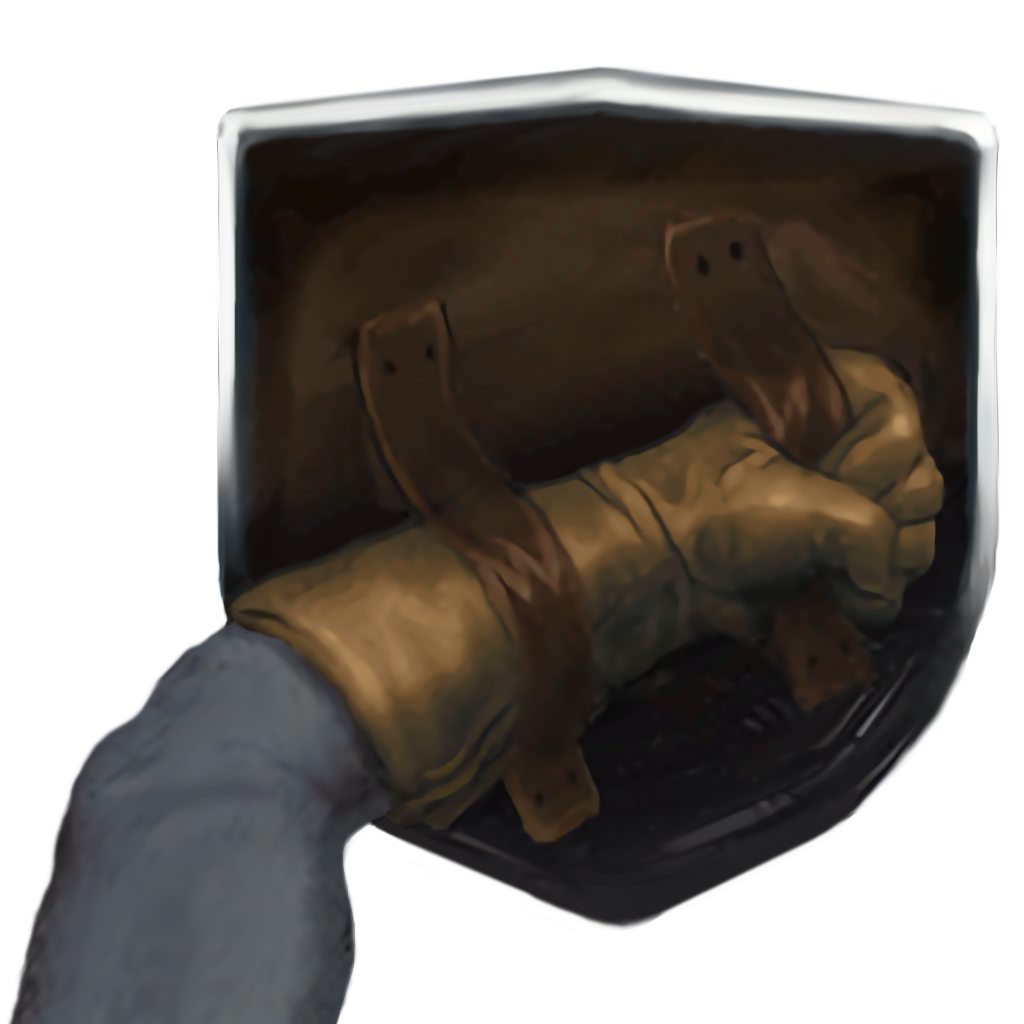 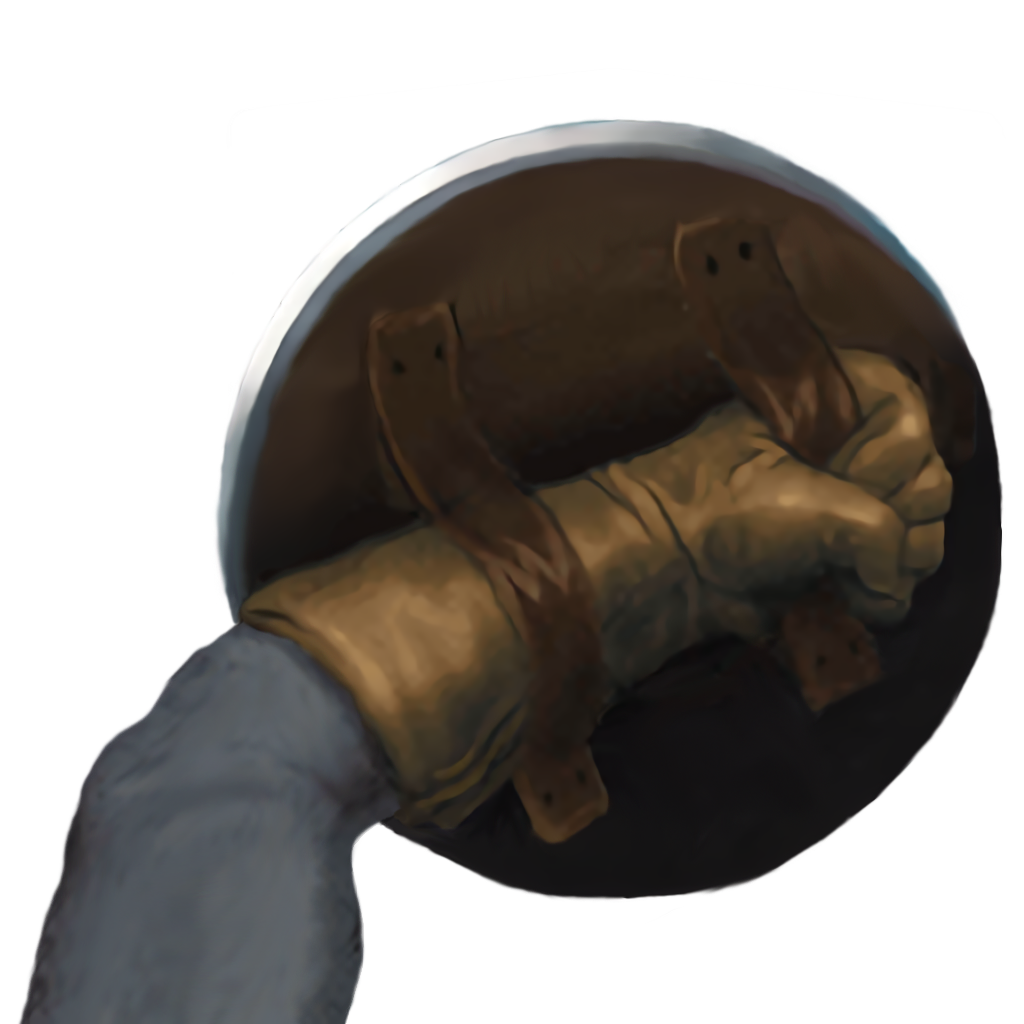 Oh man, thank you. I love the shields. Now you're going to make me go back and update my shield module real quick with these hd ones for Dream users. I can get these in easy using Unity code to import them and then resize them on the fly.

As for the dream artwork. I need to see what the memory issue is your talking about. I was planning on moving to dream compatibility after finished this last large equip state issue. I do want it to work with it.

Physical weapons is really intended for when I put in directional attacking, so you can choose what direction to attack based on the room/area around you.

The bow issue is taking little longer than I planned. I need to setup a whole new bow state code block to handle bow rendering and my scripts properly.

Also, found bug that was causing the bow not to disappear on reload and equip. This is fixed in base code, but I have not submitted it. Waiting to completely fix bow state issues first.
My Daggerfall Mods: l3lessed Nexus Page

Almost there. This has forced me to fix some issues with the weapon equipping/swapping system.

First release will be just straight vanilla mechanics. Followed by ambidexterity archery, which will allow offhand weapon use, when not drawing/shooting the bow.
My Daggerfall Mods: l3lessed Nexus Page

From my github comments:

Now that a bowstate is setup with its own reload arrow switch, I can now setup the ambidexterity modes.
My Daggerfall Mods: l3lessed Nexus Page

So I finally had some free time to finish my shield stuff. lots has happened including a move, a new job, an engagement, new vehicles, paperwork... blah blah blah.

anyhow, here's a rough preview of original asset friendly shield shapes that definitely need touching up - rough drafts. would love some input on them.