Show off your mod creations or just a work in progress.
Post Reply
57 posts

Thanks for the examples, I personally would probably go with "normal" leather to Padded Leather to Dragon Scale myself, As I think the dragon scale could be interestingly rare by being obtained from dragonlings and more from the "large" dragonling from the knight quest as well or something. This will probably be a while though since it's already taking a while to work through the primary implementation with the "easy" to work with materials like all the metals, it's a bit different with stuff like leather and chain, which if you ask Hazelnut, he had to do some trickery with values to fool DFU into considering his added mail armors to be mail, but also to have a new material on-top of them, but i'm sure I will figure something out eventually when I get there.
Top

Do your thing, I'll be happy to see how it turns out

Still, having a darker black leather (be it Nightleather or Shadoweave) might be a good option for roleplaying thieves/assassins. It could also function as Dark Brotherhood's armor from later TES games, giving a boost to sneak, and it could look almost identical to the existing leather, just be a darker color, so the assets should be relatively easy to produce.
Top

So I made a lot of progress today in terms of the code, was honestly surprised myself by the end. The physical combat formula aspects and the material properties are nearly completely finished. Hopefully by tomorrow i'll have some actual screenshots to show of numbers being displayed on items and the paper-doll and such to represent damage and physical resistance values. Made a large commit with all of today's changes to the github repo.
Top

Alright, so here is what I am now a few days later than I expected with. I am currently fairly happy with how the weapon values currently are (at least without any testing, but they look alright at least, will do more testing later and change accordingly) and how the paper-doll displayed armor values are, including the shield block chance when a shield is equipped. 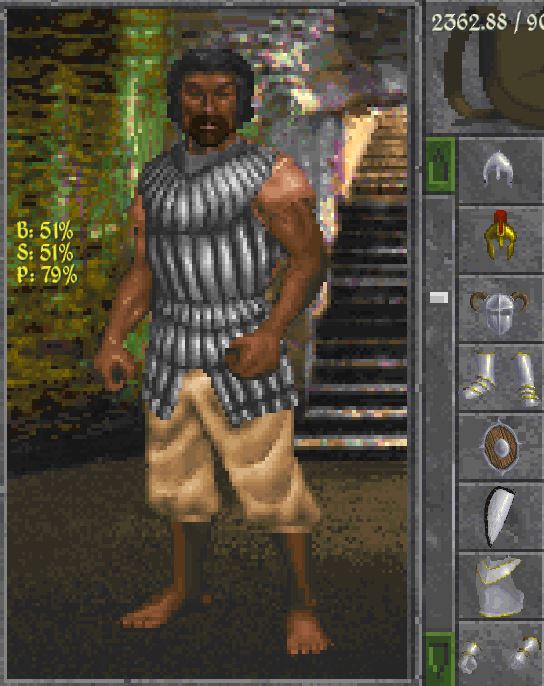 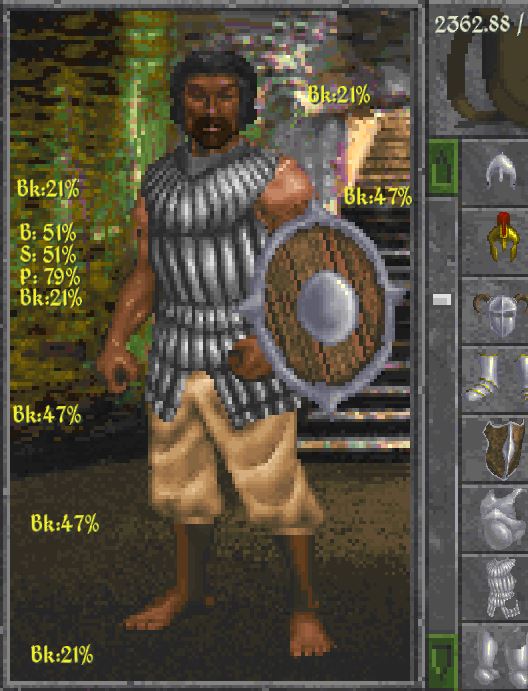 Now here is that same image but with a shield equipped, as you can see now the shield block chance is displayed for all of the respective body parts. Represented with Bk = Block chance. Trust me, it was hard to fit all of this without blocking the paper-doll itself that much, or bleeding off the background screen that much. 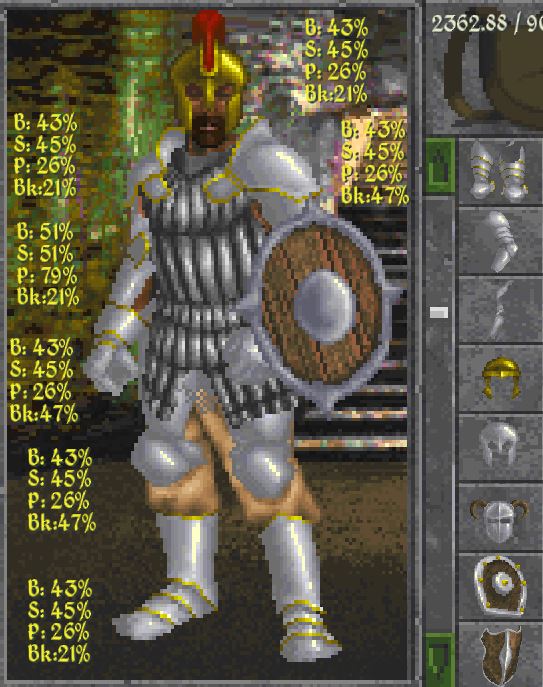 And now here is what it looks like fully decked out in some type of armor, I think I did an alright job of making the clutter-fuck as unobstructive and informative as I really could, even though it is sort of ugly still.
Top

As mentioned in the previous posts comment, I realize that this is fairly ugly if you like to look at your character's paper-doll and play dress-up Daggerfall edition. So I decided to try and help with that issue somewhat. 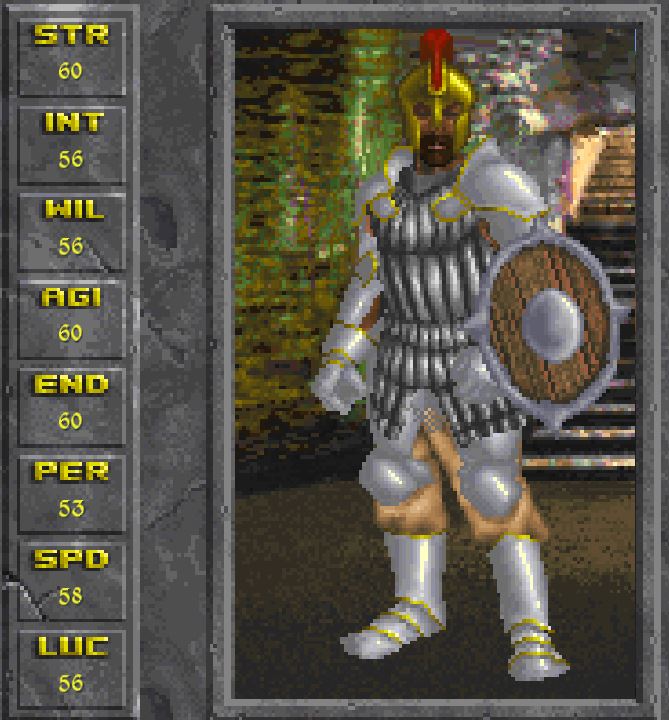 So as you can see, now on the character stat sheet, the paper-doll is no longer a 1-1 reflection of the inventory screen, I suppressed the use of the armor values, since I felt it is completely pointless to have those on this screen, when you already have them on the inventory screen. So now on the stat screen you can see an unobstructed view of your character's paper-doll without the numbers. 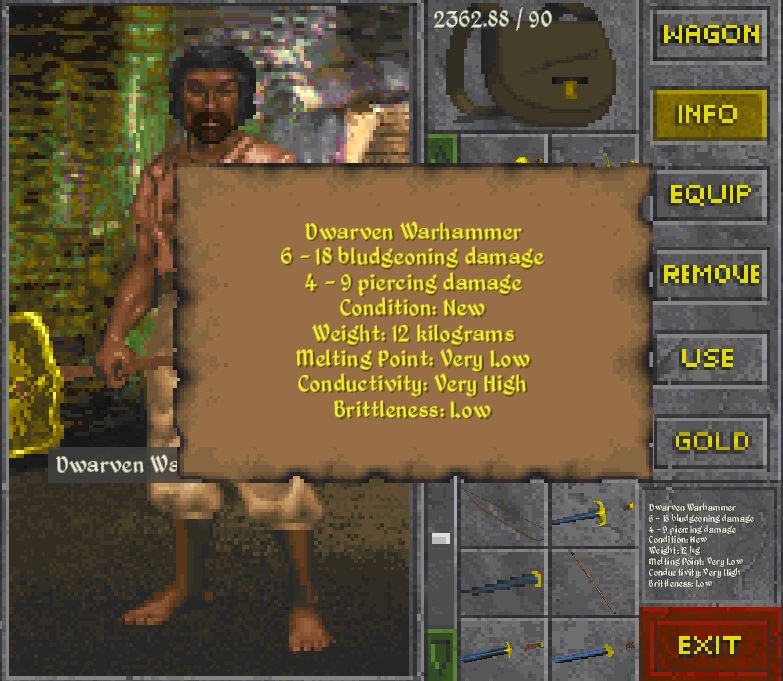 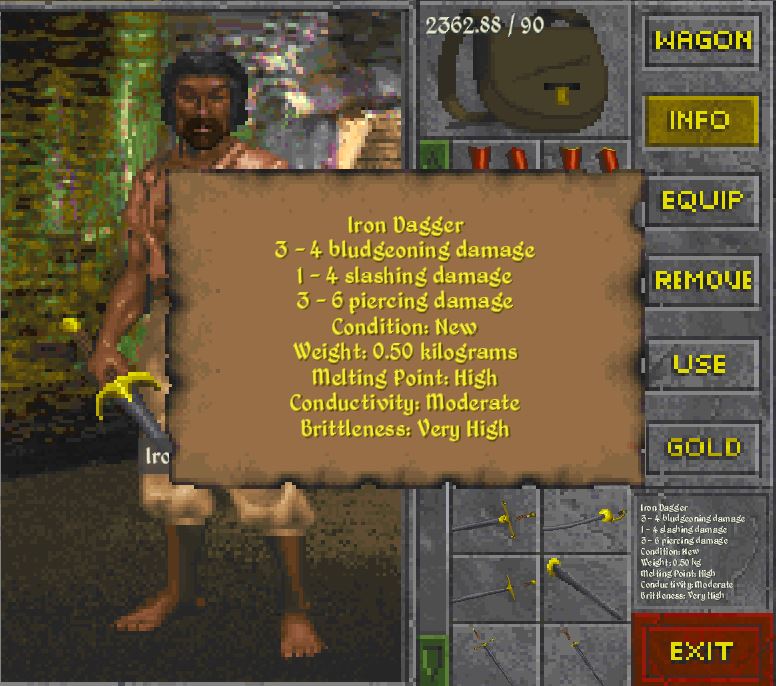 And finally, here are just some values for a few of the weapons and their respective material modified values, For weapons that only have 1-2 damage types available to deal instead of the full range of 3, the display of that row of values is suppressed and won't show up, since it is redundant anyway. Examples include the blunt weapons, which only have 2-types they can deal, no slashing damage, etc. Or the bows which only deal piercing.

So now that I have gotten this fairly large part out of the way, at least to the point of being functional and able to now effectively test and change values if necessary, I am likely going to try and add/replace audio clips and use them in-game which will be primarily used in this part of the combat reworking to add more "information" to the audio clips used during combat.

For example, if a shield-block goes through for either you or the enemy, instead of hearing the regular hit sound, it will instead play another sound that is more appropriate to what it might sound like something hitting a shield would be, so you know without text telling you, "Oh, myself or the enemy just used their shield" and the same deal with armor fully absorbing an attack that would have normally hit the target, some sound that would be like something being deflected off metal or something, and if it goes well the same for all of this but in the context of what is being hit/used to hit with. Like a blunt attacks against leather would sound different than against metal, etc.

Also the one I almost forgot, a different and distinct sound for when a critical strike occurs, with the same intention as the shield-block sound, to tell the player that something happened, not just a normal attack. I think you get the idea, i'll update the git-hub repo with these changes and continue working.
Top

Yeah, the idea is definitely cool, but the visual presentation is a bit of a disaster... at least on the paper doll. Would it not be possible to aggregate all the values and show them in one place instead of showing these values for each single piece? You would still be able to see how equipping a certain piece changes, and it wouldn't be as overloaded.
Top

NikitaTheTanner wrote: ↑Sun Nov 01, 2020 7:29 pm Yeah, the idea is definitely cool, but the visual presentation is a bit of a disaster... at least on the paper doll. Would it not be possible to aggregate all the values and show them in one place instead of showing these values for each single piece? You would still be able to see how equipping a certain piece changes, and it wouldn't be as overloaded.

Well, it would not really be that simple the way the armor system works, since there are 7 body parts that can be selected for an attack, which then all have their individual values based on the armor equipped in that slot. I could show just an average of the 3 values, but that would be almost useless practically since the average of 3 completely different values does not really help determine what piece of equipment is defending against what best. I personally don't think it matters that much on the inventory screen, if it looks a bit cluttered, since you can still view the unobstructed character in the stat screen if the visual part is a problem.

I really only added these values to be visible so that using the "info" function on every piece of equipment would not be necessary to know what a piece of equipment is doing protection-wise, instead you can just view the large values on the paper-doll. Yes, it would be less cluttered if the defense values were added across the entire body, or if there was no "body part" system in general, but the way it actually functions each individual part of the body has a separate value and equipment slot attached to it.
Top

I see, that's a pretty cool system if I get it right, but presentation is still... It's okay in first iteration, to prove the concept, but I hope it will be updated to something more legible in the future. Currently, it's not only cluttered, it also seems pretty hard to read on some background pictures, even on the provided screenshots some numbers are almost unreadable. You can still make them out, but you definitely need to strain your eyes...
Top

So i'm getting pretty close to completing most of the audio clips I plan on adding. I'll likely upload a video or something to showcase how it turns out in-game at some point. I'm going to be glad to get done with this part, it's fun and all, if not slightly tedious, I'd honestly prefer to get back to changing values and code honestly, lol.
Top

So just a question, i'm assuming that
thrust attacks are stabs
overhead attacks are blunt
and the horizontal and diagonal are slashes

My question is do these attacks only do one type of damage, or do certain attacks combine damages, or do all the figures add up to a sum total minus the protections against it?
Top
Post Reply
57 posts