Show off your mod creations or just a work in progress.
Post Reply
77 posts

Regnier wrote: ↑Thu Nov 12, 2020 10:26 pm This is interesting as it will make having multiple weapon skills worthwhile. If im not mistaken, weapon choice is a preference for the most part. but this makes it so switching from blunt to blade at the right time would have a tactical benefit. ive been skimming a bit and bouncing around to different topics but it sounds like starting with blunt to wreck armour then switching to blade to finish is a thing now?
im all for making the game mechanics worthwhile!

As of right now, it would be more of a choice depending on the situation sort of thing. Like in terms of armor, that will depend entirely on the material that armor is made from, like stabbing very dense material such as iron, steel, or orcish will be very ineffective, but the same stabbing attack against armor material with very low density would be mostly unaffected by said armor.

However, this won't be that much of a factor against enemies that don't normally have armor on at all, but every entity has a different set of weaknesses and strengths against certain types of damage. Like trying to beat an iron atronach down with blunt force would be almost useless, same with stabbing, but slashing would have greater effect overall. And this same idea would be different for every enemy, so having multiple weapons and skill in multiple weapon types would be more of a benefit than just an preference.
Top

So I somewhat surprisingly got the equipment encumbrance system to work, faster and less painful than expected.

Now i'll probably start working on the magic damage related stuff involving the various equipment characteristics, which will probably be a lot more difficult than the previous stuff due to how the whole spell bundle system works.
Top

I finished the feature where currently equipped armor will have an effect on magic attacks that come your way. Some materials will be more effective at resisting damage of different types and others will do the opposite. As well with these features, armor will now take condition damage from incoming magic attacks, so those fireballs will actually damage your gear instead of just your flesh, even if you resist the effect or are immune, after all it's not like the armor is immune to the fire, but the person inside the armor is.

Now I just have to decide what the next feature/mechanic I plan on working on next, likely putting in the improved leveling/training systems I have already made in my unreleased mods, but that won't take long at all, so after that maybe the enemy loot tables and spell tables? I'm really not sure, maybe even start trying to add the materials and ingot items I mentioned a while back. It's definitely a toss up on a few things, but I have a lot to choose from at least.
Top

Just finished implementing the Skill Leveling and Training improvements module, was all copy and paste from what I had already done. I think now i'm going to try and add in some simple material items and see how it goes, then possibly spell or loot-tables changes for enemies.
Top

Sorry for no update in a couple of days, I just started playing tf2 after not playing it for like 5+ years and have been enjoying it quite a bit recently, so I've been indulging in that for a little bit. I'm currently focusing on adding in those material ingots as items, while trying to make them work similar to how metal armor and weapons work, that being they are a base template that later gets their characteristics assigned later on when a material is assigned to them. This way I would only need to create one sprite for the item and apply dyes to it, as well as only taking up one item index.
Top

So I finally got off my ass and implemented the custom ingot item I was talking about, and it seems to work pretty well so far. It took some trial and error to realize that seemingly the most simple way to do this was through the custom item modding system that Hazelnut and others implemented. Through other attempted avenues it was more difficult, especially when it came to adding in the textures due to how DFU reads most of this data directly from the Daggerfall game-files.

After using the modding system the process went a lot smoother thankfully, even though I had to recolor the different ingot material by hand rather than using the dye system that is built in for the vanilla weapons and armor.

Here is the result of this new item, I even got them to stack properly.

So now that I finally got that part done, I think the next logical step would be to start working on the actual implementation of this new item into the in-game "economy" in terms of giving shops and guilds that provide the repair service an inventory of sorts for these items as I mentioned, and requiring these ingots to be used in the repair of items that are made of said materials and such, as well as other things. I can hopefully take a lot of examples from how I did the "Limited Gold Shops" mod and use that code in a similar way, at the very least for the shops internal "reserves" and such. The other part will require a lot of messing around with the repair window interface itself.
Top

Thanks, hopefully I can keep some momentum on this, just working on one feature and piece of that feature at a time.
Top

So I realized that if i'm going to have an added material requirement/cost for repairing damaged equipment using the repair services, I also realized that the player would also need/want a way to visually know what that cost would be, without having to constantly "confirm" and then cancel trade offers just to see what materials it's going to cost them to repair their stuff.

I decided to add a UI element to the repair service window, similar to the "cost" text just above the paper-doll in all trade windows that shows an estimate of what the transaction is going to value at. So knowing that there is very little screen real estate to work with in the trade window, so I decided that the best option would be to change that mostly useless image of the anvil with something that actually had a purpose.

So I replaced the anvil image with this image.

Then adding new text labels on-top of that image that will indicate the cost of materials for that particular transaction, which will update whenever the player adds or removes items from the remote list, just as the "cost" label changes as well.

And here is what this looks like in practice. 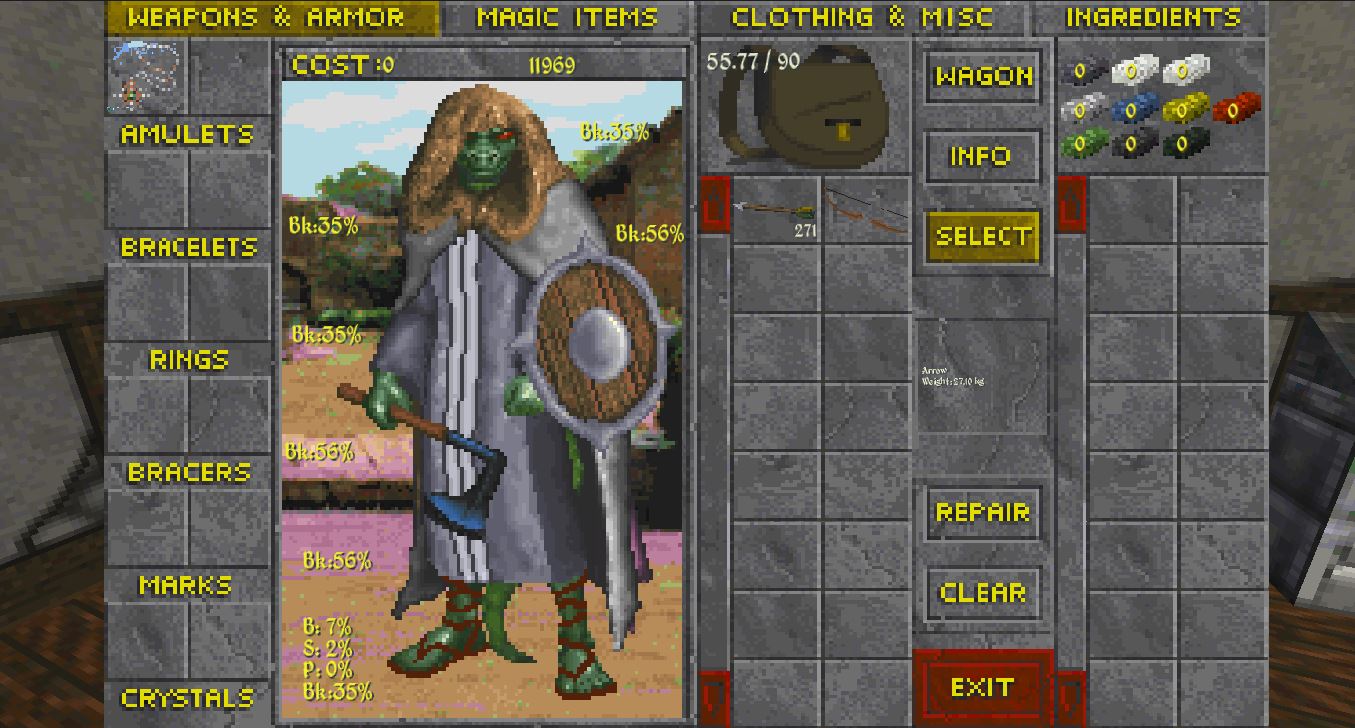 Now I just need to actually code those place-holder "0" values to actually correspond with values read from the remote list based on various factors and that part of this feature will be done pretty much. I had to scale down the size of the ingot images in this case about 2.5x, which is why they look like colorized Minecraft steaks, otherwise Daggerfall scales down the image in a weird way the larger the image gets.
Top

Thanks for grinding so hard!
Top
Post Reply
77 posts