I didn't communicate this very well earlier. The recent 0.10.25 release carries the upgrade to Unity 2019.4.2f1 LTS. This will be the last major engine upgrade for at least 2 years. This will be the baseline engine version from now through to 1.0 and foreseeable future.

To prepare your mods for 0.10.25 and later, you will need to setup the following:
Many mods built under 2018.2.21f1 will continue to function in 0.10.25, but there could be compatibility issues depending on the mod. I've made a change to the Live Builds page to help differentiate releases like 0.10.25 as preview builds, with 0.10.24 being the last stable build for next few months.

There will be another change coming up in 0.10.26 related to Localization features. To start with, all text from HardString.cs will be migrated to Localization. The CSV text tables will be migrated in future. If you have any touch on the strings in HardStrings.cs or CSV text tables, please keep your master build up to date as well and be ready to change the way these strings are accessed. I'll cover this more once 0.10.26 is closer to completion. Reserving a couple of replies below for this purpose later.
Top

Some common/known issues you might encounter after upgrading:
I will add to this list as anything comes up.
Top

TheLacus wrote: ↑Sat Jul 18, 2020 12:57 am It's not possible to define enums inside mod scripts. This is a known limitation that has always been there.

Use constants instead. You can make a static class containing only constants to partially emulate an enum.

The portable compiler, however, states that this feature is not available in C# 6 (which is actually true).


Can't use enum values as default
The below signature will throw an error due to WindowModes windowMode = WindowModes.Sell.

The following will not with default value removed. Workaround is to overload constructors and pass values without being defaults.

Interkarma wrote: ↑Thu Jul 16, 2020 10:38 pm Some common/known issues you might encounter after upgrading:

So does this mean that a few of the "FormulaHelper.cs" Delegates will need to be rewritten? There are a few that have at least 5 targets, and now that I got my 2019 Unity environment set up and opened some of these in VS it is showing warnings involving what you mentioned. Also due to this, many overrides obviously overriding the same methods are getting the same error due to the 4+ delegate targets.
Last edited by Magicono43 on Fri Jul 17, 2020 9:52 pm, edited 1 time in total.
Top

The Func delegate for >4 arguments is now part of .NET 4.x. The custom Func delegate we used earlier is no longer required and has been removed.

Now I see a mistake on my end - the tagged 0.10.25 commit is 244b7a3, and Func was removed in the commit immediately after that one cbcbf58. This should have been the tagged release commit and used for builds, not 244b7a3. Yeah, that could definitely cause some problems.

Edit: I've updated tagged releases with v0.10.25a-alpha. This tag is now correctly after the custom Func delegate was removed and you will not see those warnings in editor. Matching builds are cooking now and will be up in another hour. This build is still internally versioned as 0.10.25, but will have the display name "0.10.25a" on live builds page when ready. This should be the build you test against moving forwards. Users will need to re-download 0.10.25a.

Edit2: 0.10.25a builds are available now. Please grab the tagged code and rebuild mods against this code, then test in matching 0.10.25a live builds. Hopefully that solves the problems of built mods working in editor but not in live builds.
Top

So I just downloaded the 0.10.25a build and put it in my Unity environment, I have not built any of the mods having issues yet, but I did notice that in "FormulaHelper.cs" those warnings for the Funcs are still showing up, as well as for mods overriding said methods. This time it gives a "Potential Fixes" option in FormulaHelper saying to "Inline Variable Declaration".

Here are some screen-shots to show what it looks like: 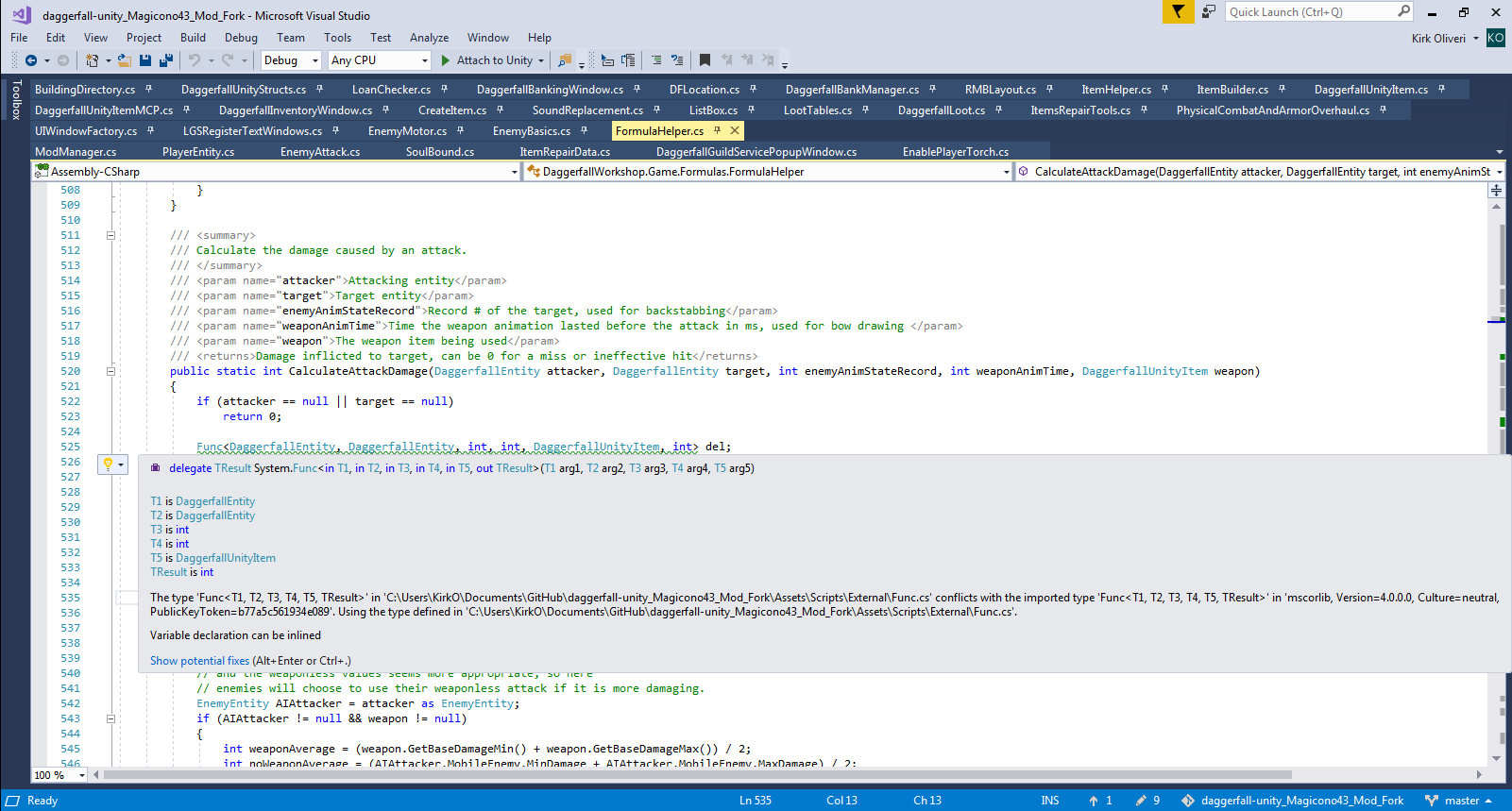 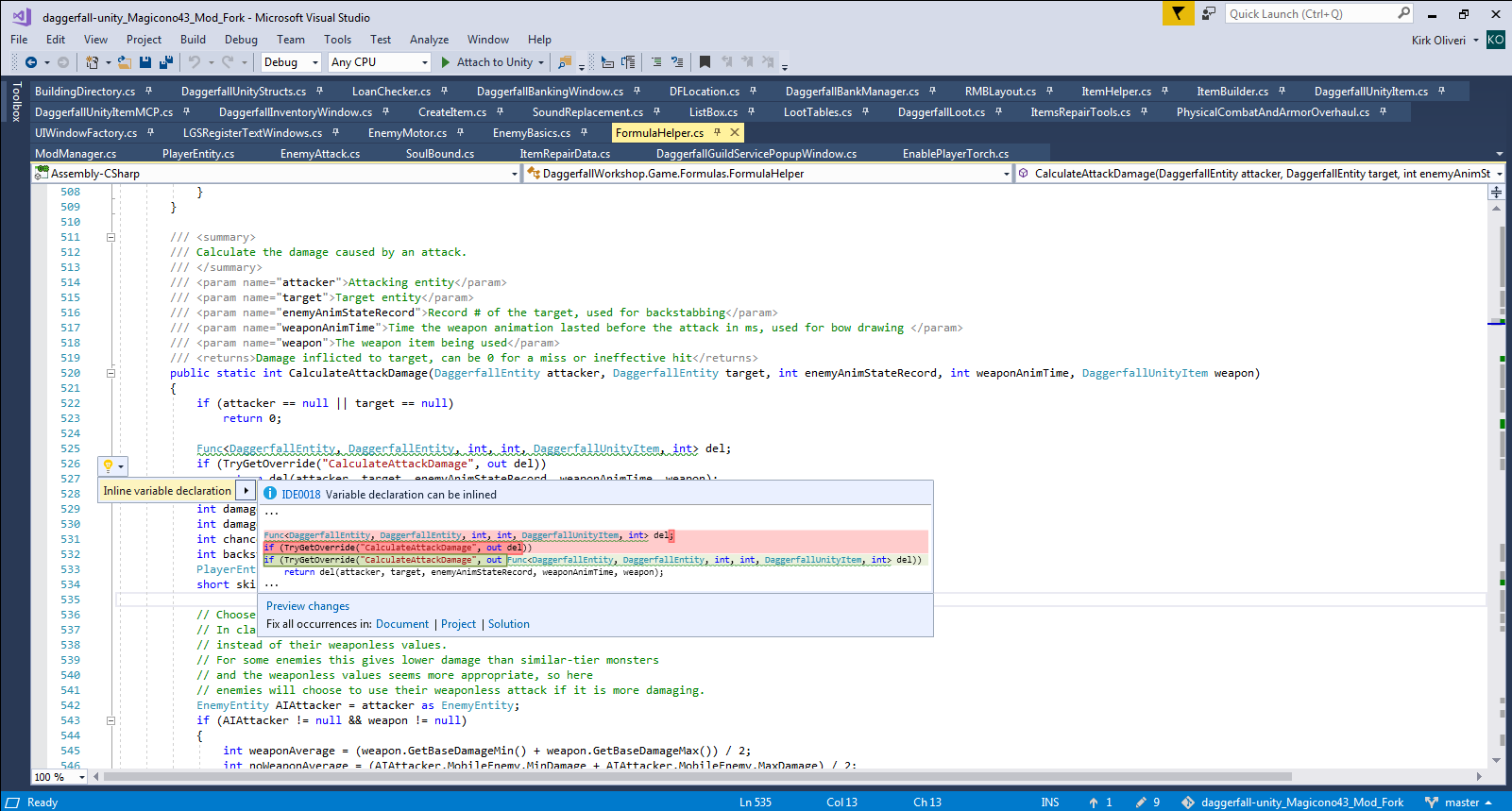 I'm not really sure if in this case the "warnings" would cause any problems in actual execution, but just as a note that those Func lines are apparently considered redundant, but like I said, not sure if having them still exist will cause any problems.

I'm now going to try and rebuild my mod that was having issues in it's compiled form in this 0.10.25a version and see if anything changed, thanks.
Top

I think you forgot to change the name of the version. 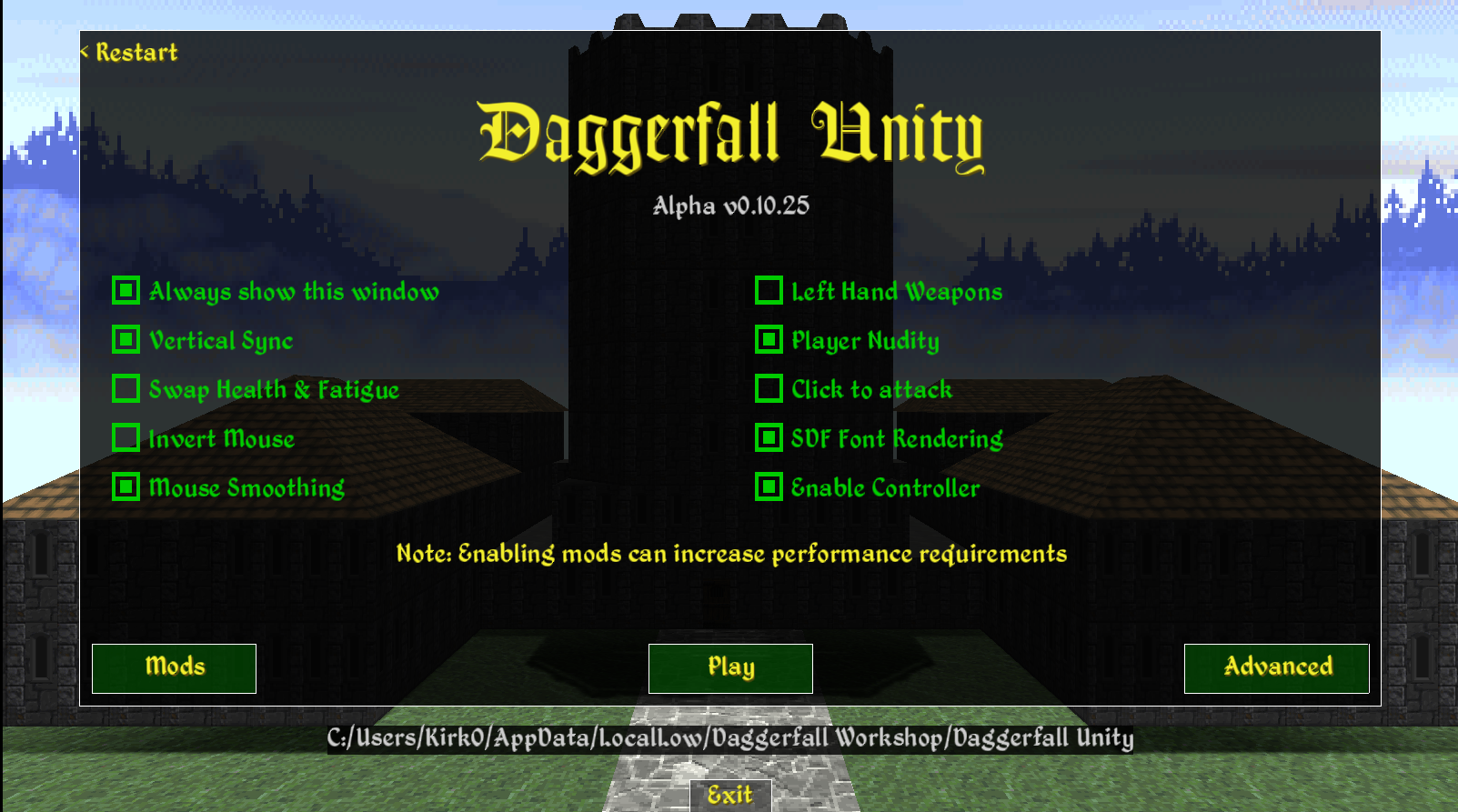 Also just as a note, the mod that I was talking about working in a virtual form and not in a "live" built form is still not working in its compiled form, showing the same error, unfortunately. But maybe some other mods were helped by this, like Ralzar, but i'd have to see from them first if that's the case or not.
Top

Those Func warning do not appear when downloading from latest tag. I just downloaded and confirmed again then. Please double-check you're using the correct version. If you have the correct code, Func.cs will be nowhere in your project. You can ignore the editor style change to inline.

I did not forget to change the version, I mention this above:

For your specific error, it sounds like something else is happening.