A curated forum for compatible and maintained mods. Users are unable to create new topics in this forum but can reply to existing topics. Please message a moderator to have your mod moved into this forum area.
Post Reply
2277 posts

That's hilarious... I would keep that glitch in myself


Have u tried switching the priority of loading of the mods?

Putting this here for anyone looking for an answer. This is from the VIO thread.


Kamer wrote: ↑Thu Oct 01, 2020 4:05 pm As stated in the update, the graphical replacements for guards aren't supported by the dynamic sprites. Disable dynamic sprites or disable that module of dreams.

So you wanted a save file with the misaligned heads. It happens to me any time I start a new game or load my old (0.10.24) save with the specific race/head combinations. Character name is "F". I'm guessing you don't have an existing 963 save, so you should be able to drop it right into %UserProfile%\AppData\LocalLow\Daggerfall Workshop\Daggerfall Unity\Saves and load it.

I made the save without any mods active, then activated DREAM - PAPERDOLL, and it had the alignment issues.

I'm using 0.10.26, but had the same problem with 0.10.24. I tried toggling Player Nudity on the starting menu. Likewise, I tried turning Helm and Shield Material Display and SDF Font Rendering off, and all got the same results.

It might be of note that disabling DREAM - HUD & MENU causes my mouse cursor to disappear in-game, though it works on the main menu. Also, I have Reshade installed on 0.10.26, but didn't ever install it on 0.10.24 and still had issues.
Top

Thanks for the save. When I load it, the character looks good. But when I equip the helmet, it doesnt fit well on the head.

Is this what you refer to as a misaligned head?

PS: that issue with the cursor is a game bug, I think its known and will be corrected in future. If Im not mistaken, if you remove the HUD mod from the folder, the issue will be solved. I cant do anything about it as a modder.
DREAM Nexus https://www.nexusmods.com/users/73250038?tab=user+files
DREAM Forums viewtopic.php?f=27&t=1168
DREAM FACES https://docs.google.com/document/d/1fRI ... sp=sharing

Is this what you refer to as a misaligned head?

I agree that the head looks good by itself. But most of the other heads look good by themselves and the helmet fits. So I'm assuming it's the head alignment that's off, not that the helmet is somehow misaligning on that head.
Top

Nah its the helmet in this case, Im almost certain.

EDIT: its actually the head you are right...

So I used the original head as a overlay to the HD head, and moved the HD head so the eyes are at the same possition as the original, and it solved the issue.

So this means I will go thru all the HD heads and do the same and it should solve the issues reported.

You made that detailed report with head placements... that means you had to create all these NPCs right?
Might you be willing to help?
I need those save files... so I can load a save file, see how the face looks, and alter it in the mod.
I know its some work, but it would really help.
IF you can name the CHARACTERs like this, it would help even more:

I need only the saves which need some correction, priority is the big issues, low priority is 1 - 2 pixel issues

Let me know if this might be something you might do... it would really help me. Thank you"
DREAM Nexus https://www.nexusmods.com/users/73250038?tab=user+files
DREAM Forums viewtopic.php?f=27&t=1168
DREAM FACES https://docs.google.com/document/d/1fRI ... sp=sharing

I was thinking about making the shield Artifact SpellBreaker a bit more stand out, so you have some kind of accomplishment feeling when you finally get it.

King of Worms wrote: ↑Sat Oct 10, 2020 4:30 pm I was thinking about making the shield Artifact SpellBreaker a bit more stand out, so you have some kind of accomplishment feeling when you finally get it.
Untitled-2.jpg

Looks good! Spellbreaker has a pretty distinct and consistent design from Morrowind and onwards, maybe you could include some of those features in your design?

I saw those models when I was thinking about the style of this shield Alexander, but they are so different from Daggerfall art I decided to go with the original shapes.

Ive spend some time experimenting with the later style of "dents" in the shield this evening, but was unable to transport that feature to this shield in a way it looks good when equipped :X

Im afraid it would require completely different and new shield in a style of later TES games, and thats something I doubt would look good when executed by me. A complete redraw could help, but for that my painting skills are not enough.

If any artist is feeling like it, here is the shield in the latest version and he can try: 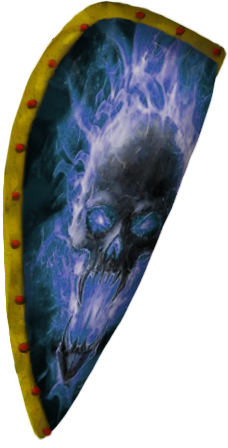