This is more of a TODO than a bug, but adding here to follow up later. The current implementation of Dispel Magic doesn't provide user with a list of active spells to dispel like classic, it simply nukes all active spells.

In classic, user is provided with a list of active spells, including those from items, and can select which spell to dispel. This also requires Dispel to pass Chance roll for success. As a side note, an active Teleport achor will not be presented for dispel menu. From initial observation, only effects with a visible spell icon are offered to dispel menu.

The current Dispel Magic behaviour in DFU was functional placeholder and was not finalised as intended. I will address this in a future build. 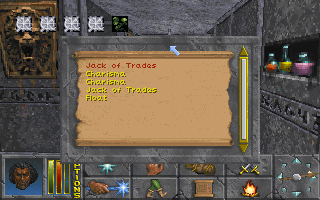 
Also worth mentioning a couple of bugs around Dispel Magic in classic. First, the circinate spell Null Magicka is set as a touch spell - whereas the Dispel Magic effect its built on is only available as self-cast via spellmaker. It's not entirely clear if Dispel Magic is intended to be cast on other entities or not. The second bug is the popup list shown above will usually error out and stick on top of spellmaker permanently until game is closed and opened.

I'll review effect and implement more cleanly in DFU as part of this actioning this report.
Top
Post Reply
1 post • Page 1 of 1