Talk about the mods or features you'd like to see in Daggerfall Unity. Give mod creators some ideas!
Post Reply
12 posts

I recently came across the "Trees of daggerfall" mod and it sucks a lot of performance, also the retro look somewhat gets lost and the trees have so much detail that they kind of do not match the environment.

So maybe you could use "Billboard clouds" to render the tree in a more "retro compatible fashion"...

The simplest "billboard cloud imposter" is two quads crossed with the tree rendered from 2 perspectives (this could be hand made or by projecting 3D trees from 2 directions).
Somewhat like in this game:
https://youtu.be/ginN-SVZkSc
https://www.youtube.com/watch?v=IifrGuITF2k
(or in minecraft the flowers)


This way they look consistent like sprites, but do not have the up/down-look warpings, while adding another dimension to them compared to classic daggerfall sprite trees.

The pros for "billboard clouds" compared to "billboard imposters" is that you have the spacial consistent rotation (when moving around the object) as well as simplified processing for the GPU pipeline (no query on the CPU for the right imposter angle). Also you could render the images in the "Daggerfall palette"/low res and have a more "retro consistent look".
Top

I like the crossed billboards in the 1st game.

But that requires specific sprite ;/

That's true... They would have to be made handmade..
Or you would use the trees from "Trees of Daggerfall" with "slicing" [0]: 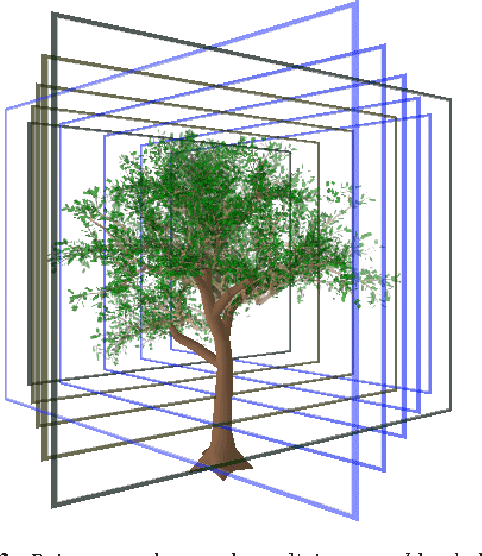 I also had this thought. I could generate either a 3D Texture or a Texture2D array by slicing the tree models, then render those slices onto crossed quads.

The main problem with this technique is dealing with overdraw, but that can be handled with custom meshes that cut out as much alpha as possible. The second problem is that this increases the complexity of the render queue sorting where the renderer has to determine which of the slices to draw first. I'm not a rendering expert so this may not be as big of a deal as I think.

Another problem is what KoW pointed out. If the tree trunk isn't directly in the center of the frame and project straight up, then your slices will look weird. Consider this tree for example: Assuming we're starting from the 3D version of this sprite, where do you put the origin of the slices so that it looks correct when viewed from various angles?

I don't want you to think that I'm discrediting your idea, I'm really not. I just wanted to walk you through my thought process as to why I haven't tried it yet. Maybe you have a way to overcome these issues.
Top

It depends on the approach, billboard clouds should work for any geometry.
(Billboard clouds are an approximation of the geometry, where the vertices get clustered by the k-means-algorithm, and replaced by a plane)

As for slicing from the center... I guess this would produce some problems...

The splicing and blending of the paper however works with multiple splices not necessary in the center (basically a grid)..
So that should work for any geometry...

As for handmade 2-cross billboards.... You would have to make one of the plane a 2D-Mesh, rather than simply a billboard...
Basically following the geometry.

You would have to make "sub-geometries"... Taking parts of the "tree" and modelling them as 2-Cross billboards.

They would be handmade retro models. 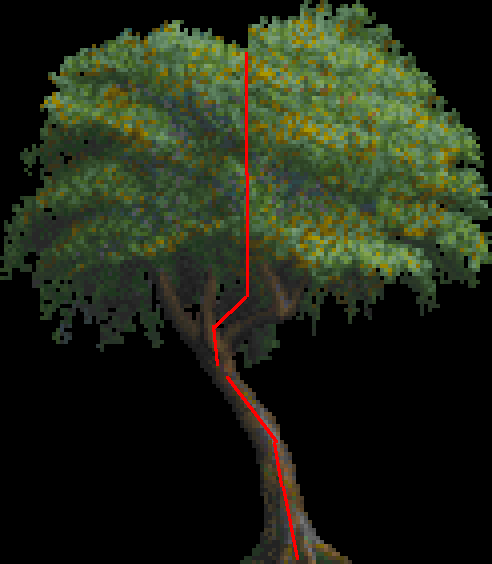 Whelp, I finally got some free time and it got interested in this idea again.

Full disclosure: If VMBlast is okay with it, I'd like to use his 3D trees as source material to create retro alternatives for my PVE mod using either the "billboard cloud" technique described in this thread, or a more traditional billboard.

See the video below for what I have so far.

I started with an easy symmetrical tree 504_13, using VMBlast's model as stated above.

The left view is the 3D model, the middle view is the "billboard cloud," and the right view is a traditional multi-view billboard.

I'm using some shader trickery on the billboard cloud to fade the "slice" in and out when it is angled steeply away from the player.

Neither of the two "retro" alternatives are perfect, but I think they look kind of interesting.
Top

Yeah, I think so. If the object is very symmetrical all the way up its y axis, then maybe it could be done with original 2D art, but as we've touched on previously in this thread, not much of Daggerfall art is symmetrical like that.

I guess technically I'm doing a variant of what DeltaOfPie referred to as a "2-Cross Billboard," except with 8 rotational slices instead of just 2... so I guess I should call it an "8-Cross Billboard?"

To be honest, I don't really understand billboard clouds. I can't find any sources that demonstrate what they look like in action or how they perform. I really just don't understand the appeal.
Top

MasonFace wrote: ↑Sun Nov 03, 2019 9:47 pm Full disclosure: If VMBlast is okay with it, I'd like to use his 3D trees as source material to create retro alternatives for my PVE mod using either the "billboard cloud" technique described in this thread, or a more traditional billboard.

Sure go ahead, you have my support on this.