Show off your mod creations or just a work in progress.
Post Reply
31 posts

Glad you did implement it!
One thing Ive noticed in the video is you clicked "rotate" on a spider and it rotated him by 180 degrees. It should rotate by 45 degrees. The MOB sprites contain only rotation to the left, rotation to the right is mirrored. And yea, the animation is too slow - I suggest to find a setting which is same as the ingame and call it a day.

Images now load as they should.
Top

This is really cool. Love it as an immersion addition. One last thing I would love to see is it added as an in-game book you have to pick up or buy before you can use it. For players who don't want to hassle, you could add an option in settings to disable the book requirement/check easy.

If you need help with adding the item and checking for it in player inventory before opening the UI, I can help there; I did this for my specalized Spellbreaker shield addition in my shield mod.

As for adding it to enemy drops lists and shops, I have not touched any of this code yet; some one else could probably assist more than I.
My Daggerfall Mod Github: l3lessed DFU Mod Github

Great progress, nice to see Dream Mobs inside the bestiary!

So I guess last things I should provide for full HD experience are:
left/right arrow
buttons
possibly the attack icon On/Off

Only thing I think should be improved is the placement of the "Animals" (or other) text above the arrows.
I think that text should be centered, now it appears to be aligned towards the left arrow.
And the arrows should be re-arranged in a way the rotation arrows are arranged now, for coherency.
The result would be this: 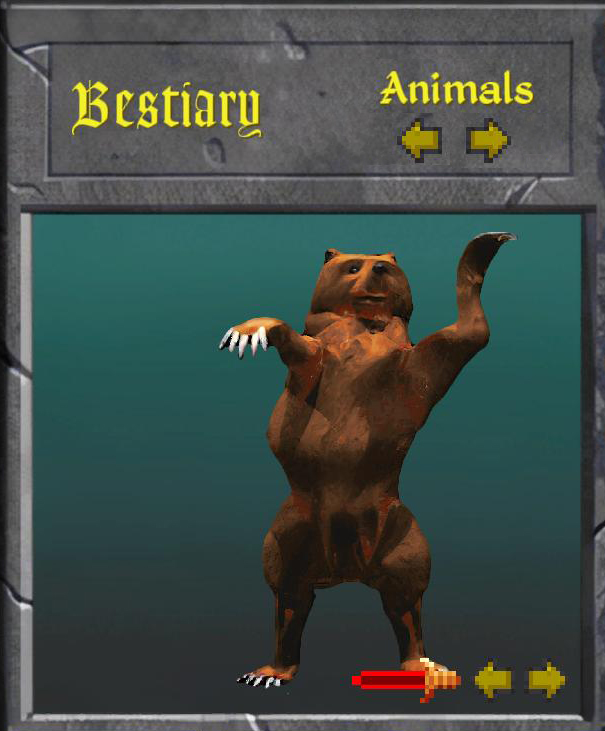 Ive created all the textures and buttons, and was able to inject them into your mod easily and it works just like that, thats great!

There are few issues, most likely u know about em, but I will write em down here just in case: 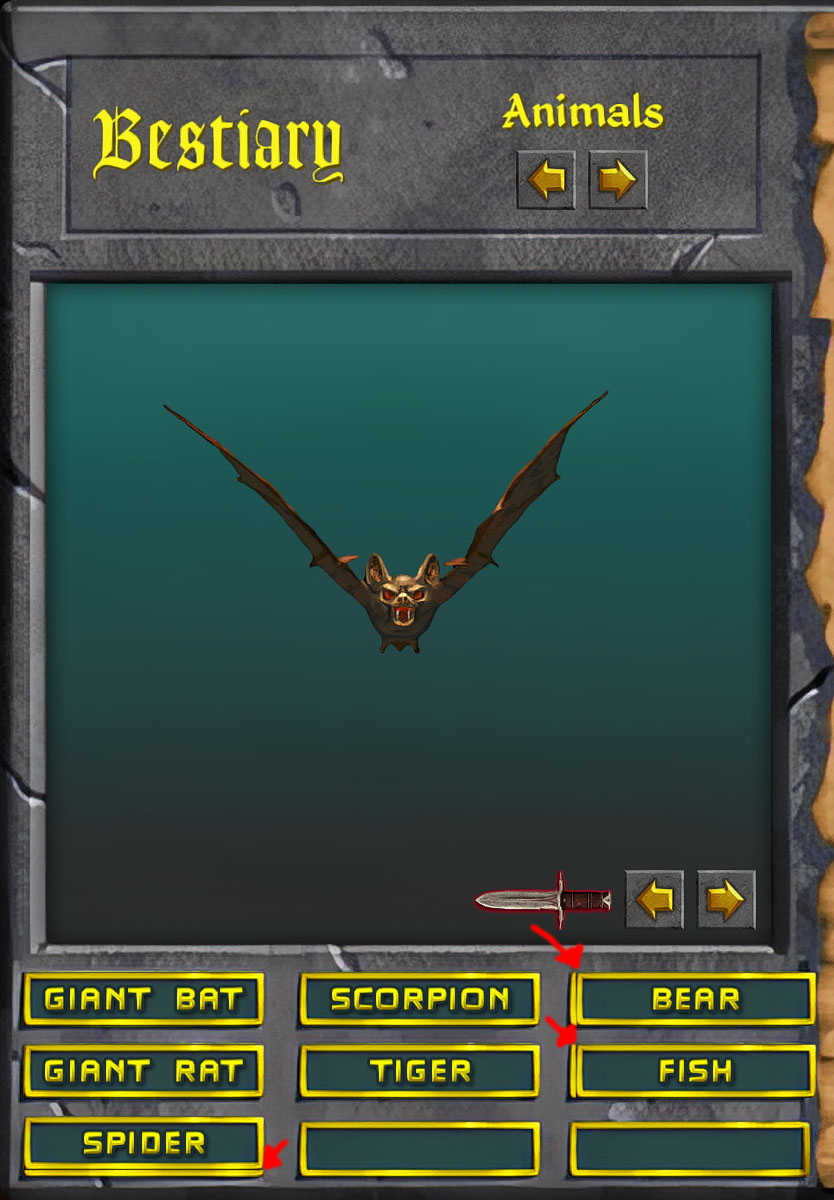 - Some animations have missing frames - Ive noticed it at Giant Rat and Spider movement. And Seducer attack.

- All mobs should face the same direction at default?
Its not the case for Bat and Scorpion. But the Bat and Rat look the best from front so Im not sure, Id personally would make all mobs front facing. Or maybe have that setting in option? Front facing/Side facing. Have a look and judge for yourself, what facing is the best.

- That dagger icon is sometimes covering the legs of some mobs, maybe it would look ok if it was moved to the left bottom corner of the blue window, like a mirrored reflection of those left/right arrows?

All in all, great job so far. Reintroducing this thing in the game is IMO really good idea!! IF you manage to make it a actual item you can buy, and introduce the mobs after the kill with a small text note when it happens, it would be amazing. Im sure in case it will be hard for you, some coders will help with that! Thank you for your efforts

Note to self:
I will remove the empty buttons on the default background. Will look better when there are no empty buttons when the mobs dont fill all the spots. - DONE

I might darken the parchment so the readability is improved. Worked well with other similar menus (notebook etc) in DREAM mod. - DONE

Heres the final result with all the changes, I think its shaping up nicely

Great work, its looking great.
I will implement it once I get to my computer (around 12 days).
Top

It's hard to tell what elemental resistances you need for each enemy since their classic spell icons are pretty much all the same. It would avoid a trip to UESP each time you need a refresher.

Ideally, it would be customizable through mod messaging so mods that change enemy spells (ex: what I'm working on) can keep the Bestiary accurate.
Top

Another suggestion after Kab
Add kill count of the specific MOB
Maybe some summary page would be nice as well, where u see all mobs names on the page and killcounts

Progress report: Note 1: What do you think about the text displayed? Most of it is copied (and a little edited) from UESP (I'll credit them once I release the mod). Should I add more, remove something? I'm open to suggestions.

Note 2: For the book item and kill count features, that'll maybe have to wait post release (of Bestiary).

Questions for coders:
Is it possible to grab abilities and spells of a mob (instead of relying on a mod messaging the changes)? I'm thinking something like this:

Note, the red part ins't actually there. It only appears once you scroll down to see it, but I didn't feel like making another screenshot. Probably should make it more apparent that you can scroll down when you can (mabe a floating arrow somewhere?, I dunno).
Top
Post Reply
31 posts