Show off your mod creations or just a work in progress.
Post Reply
586 posts

I really cannot believe how incredible all of that looks...

I say convert as much of the vanilla assets as you can in your 30 day trial! Whatever is left, I'll start a 30 trial and finish up!

I mean really, even if we were to train the ESRGAN or SFTGAN specific to Daggerfall upscaling, I really couldn't imagine them coming close to any of those samples you posted. Really great find.
Top

I can indeed run all of Daggerfall's textures and sprites through this. I find that the upscaler really screws up with white or transparent backgrounds, and just excels (well, as long as faces aren't involved) when the background is a dark blue-ish colour like you saw in some of those, so it's just a matter of making the backgrounds blue before-hand. The upscaling process itself uses CUDA so it's very quick, about 1 second per image on my measly GTX970.
Top

I see what you did there.

Checking to see if people are awake?

@Freak2121: Wow, these are absolutely stunning !

I also vote for an up-scaling job where all vanilla textures/sprites would be processed in this way to produce an Upscaled Ultra vanilla Dagerfall texture/sprite set. (hi-res but as close as possible to the Classic). This would be wow!


p.s.
I can also donate GPU/CPU time no prob. and do them in a batch-manner if someone is willing to nicely prepare and package all possible textures/sprites of Daggerfall in one archive and send me a Gdrive link or something similar.
Top

MasonFace wrote: ↑
Sun Dec 23, 2018 7:45 pm
I was tinkering around with ESRGAN and SFTGAN this morning and found a workflow that produces consistently decent results.

My new method involves appying a 1 pixel guassian blur to the vanilla texture then feeding it into ESRGAN, then applying a sharpen filter to the result, then upscaling that with SFTGAN. The results look a little better to my eye:

In my experiments with waifu2x, I found that blur does produce better results with certain edges and curves but the output image remains visibly blurred, which is not a good thing.

I found a workaround by "softening" the source image instead. First I take the original image and scale it up by 4x using the xBRZ Scaler Test with either xBR or xBRZ scalers, then open it in GIMP and apply the pixellate filter at 4 pixel radius, then resize the image to the original dimensions with the nearest neighbour method. This only slightly blurs the contrasts that are inevitable in an 8-bit image, which is enough for waifu2x to process the image in a more proper way.

Here's a comparison of a sample DF texture. Raw image scaled to 4x (TTA2) on the left, softened on the right (both with RGB mode scaling): 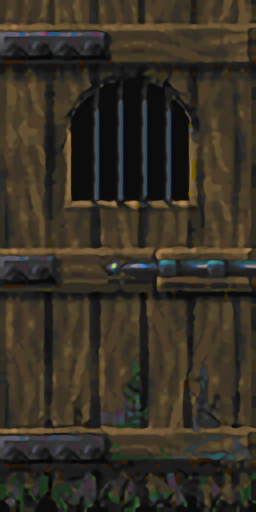 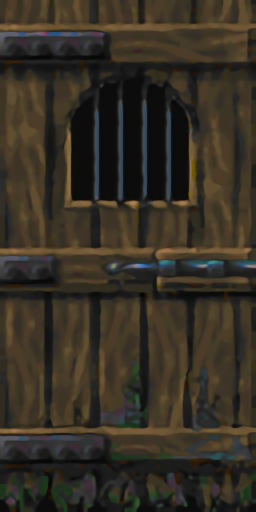 I wasn't content with the fact that the result is still pretty blurry, so I tried blending several layers using waifu2x processing with two passes: 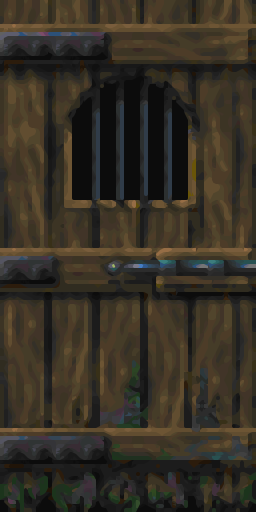 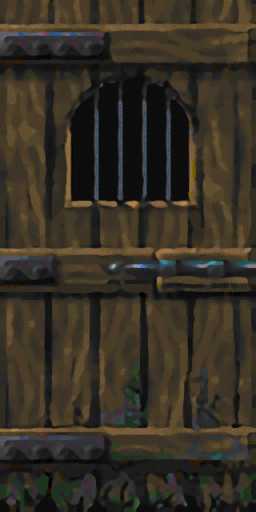 I described the blending process in a bit more detail here.

And here's a test of the dog (4x the original size but then increased by 2x using nearest neighbour for better visibility): 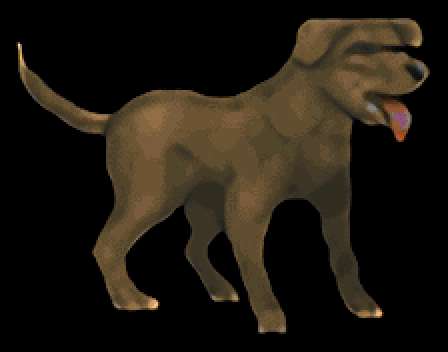 This is a blend of three layers, all of which were produced by waifu2x from a "softened" image (as described above): 4x Y-mode (TTA2, one pass), 4x Y-mode (TTA2, to passes), and 4x RBG mode (TTA2, two passes). The result was converted to the original palette with mtPaint using Scattered (effect) dithering method

I wonder what results you might get with ESRGAN or SFTGAN if you use the softening method instead of Gaussian blur.

UPD: Here's the horse sprite, processed in almost the same way as the dog except that the one-pass layer out of the three was with RGB mode instead of Y-mode: 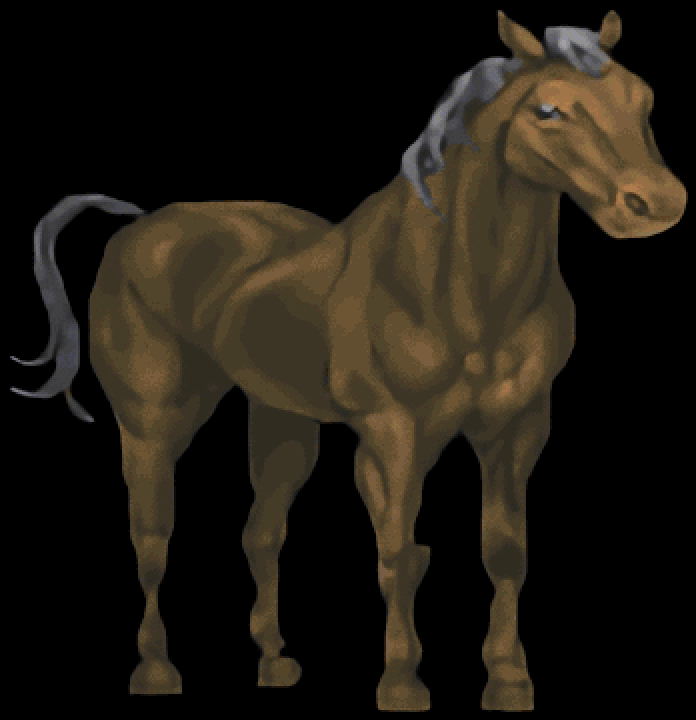 You might have noticed that the "xBRZ softening" produces some very good results on the sprite edges compared to the raw image.
Daggerfall clothes & armour fix
Top

Thanks for sharing your methods, Mr. Flibble! I've done quite a bit of reading of your upscale work on the Duke Nukem and Doom World forums and drew some inspiration from what I found. I started incorporating Waifu and xBRZ like you and KoW mentioned (although I hadn't tried the pixellate filter yet) and I got improved results, but none of them compared to the level of quality that Freak2121 was able to get by just running the images straight into the Topaz A.I. Gigapixel program, so I desisted. I'm going to spend more time working on my Spriter script (https://forums.dfworkshop.net/viewtopic.php?f=22&t=1613) in the meantime.

Also, my first kid is due to be born in a few days, so I actually may not have a chance to do much of anything aside from changing diapers and cuddling for quite a while.

MasonFace wrote: ↑
Fri Dec 28, 2018 6:29 pm
Also, my first kid is due to be born in a few days, so I actually may not have a chance to do much of anything aside from changing diapers and cuddling for quite a while.

Best wishes for a smooth delivery!
See my mod code for examples of how to change various aspects of DFU: https://github.com/ajrb/dfunity-mods
Top

Best wishes for a smooth delivery!

Thank you my dude!

@MasonFace: All the best! (I am also a fresh father