Show off your mod creations or just a work in progress.
Post Reply
12 posts

I noticed some of those portraits before, I'm glad to see there's more! Wonderful artwork
When a measure becomes a target, it ceases to be a good measure.
-- Charles Goodhart
Top

everyone has his own way
I consider this as "fast" workflow. It is actually based on how I painted stuff like this with oils in an art college:
- linework/construction
- basic tones (usually 3 shades of grey)
- draft coloring
- proper coloring
- adding details

When painting with oils you'll need to wait evewry time until paint will dry after each step - so it is very similar to how layers in PS/Krita/you-name-it are work.

Some people paint with colors directly (skipping tonal-greyshade phase), but this is not how I was taught.

Most interesting in these portraits is that all of them were made by only one guy in bethesda that days. He was used photos as a base for most of the human characters, that's why some characters looks realistic (in a bit creepy way) and some (Like Gotvorg for example) look just... strange.
This technique, haste in general and amount of work charged on only one man caused 2 problems:
- Most of the characters has problems with proportions. It looks ok in that pixelart-ish style but as soon as it became more detailed it becames a problem.
- A lot of the times that guy just ignored racial features. For example:
this it a dunmer from character creation screen: 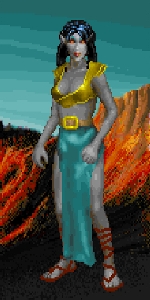 looks lore-friendly enough
And this is Helseth Hlaalu - guy who supposed to be dunmer too, but artist just forgot about grey skin: 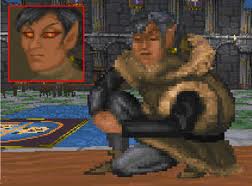 Then redguards. In daggerfall they weren't just simply african type (as they are in a later games), but they had dark/brown skin. One could interpret that as something in the middle between African, Indian and Arab people: 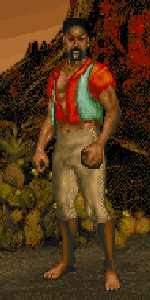 And this person is supposed to be redguard too: 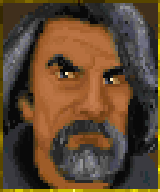 so, to keep most of his facial features I made him look more Indian