Talk about the mods or features you'd like to see in Daggerfall Unity. Give mod creators some ideas!
Post Reply
30 posts

This is something for the far future which I'll be working on in little bits. I just have a few proofs of concept here.

I feel as though Daggerfall's main quest fails to take advantage of many of the rich set pieces available to the game world. So many NPCs are hardly scratched with a fingernail, let alone getting a personality to speak of. When the main quest is finished it hardly feels as though you know anyone at all. In addition, there are a lot of improvements and changes that could be made to the gameplay and structure of the main quest without losing anything of substance.

So here are a few ideas on print of how a MQ 2.0 could look.

Brisienna not only tells you to speak to the royal families of the Iliac Bay, but assigns you to do so. Each member of the royalty and of the court will have something to say illuminating their perspective and position. 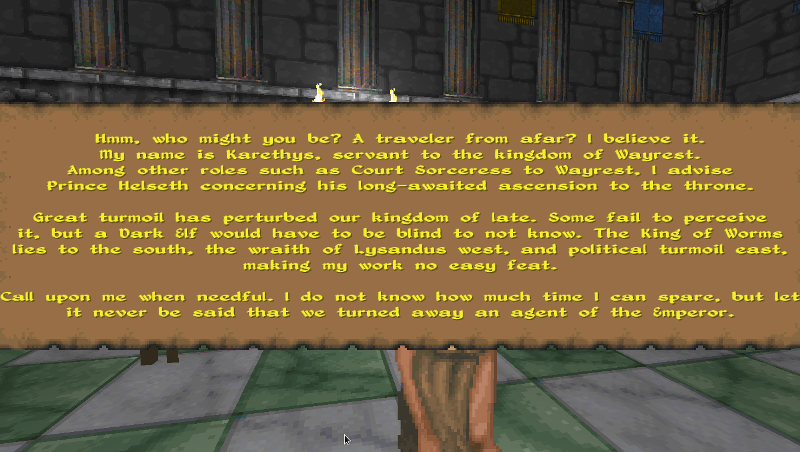 Morgiah sends you a letter after you visit Wayrest Castle on Brisienna's assignment, asking for your help contacting the King of Worms. Once you return, her clever political senses could lead more directly toward a good informant in Daggerfall, making for a better hint. 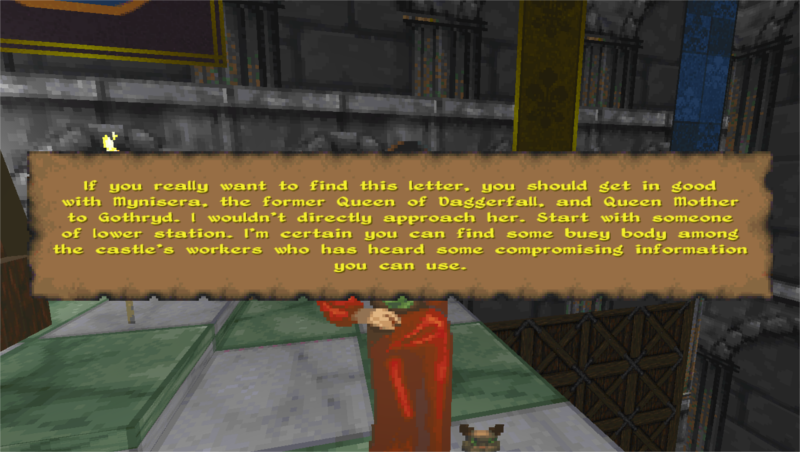 Perhaps he never met his brother, but Lhotun can still suffer severely from seeing his world fall down around him. 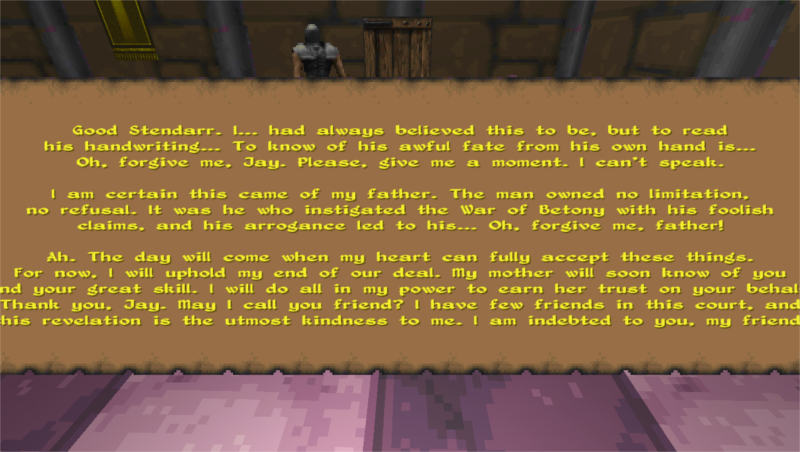 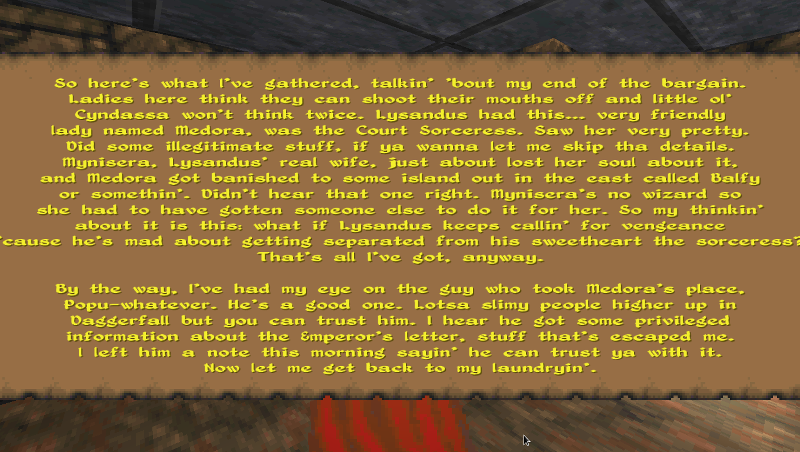 ... and other members of the court might help to fill in the blanks. 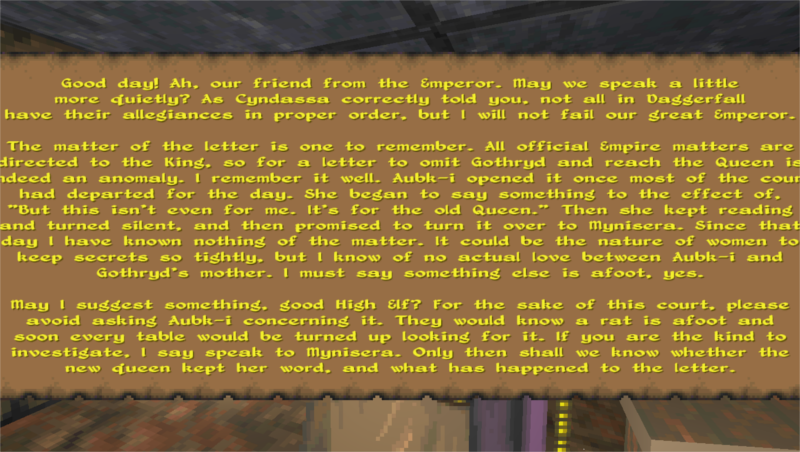 Of course, not everyone will be happy with your sudden intrusion on behalf of the Emperor. 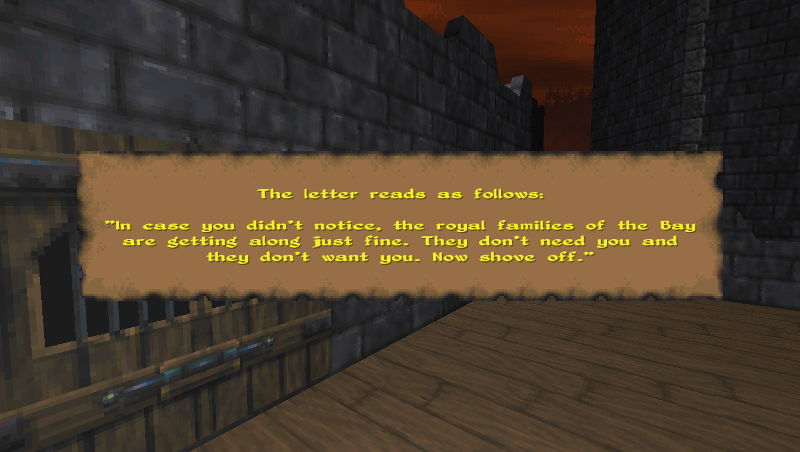 This wouldn't change anything about the main quest's final outcome, but it would make a much more robust pathway there, and would add more events along the way.
Come join Lysandus' Tomb, a Daggerfall Unity fan Discord.
In-progress guide for Quest Pack 1 here.
Top

As someone that has played Daggerfall a lot in my life, I'd also enjoy the surprise of replaying an remixed and expanded version of the main story. It's a fascinating concept and very within the realms of possibility right now.
Top

Your work on custom quests has been stellar, so I'm delighted you've chosen to expand the main quest in this way. I'll be keeping a close eye on any developments here for sure!

Thank you for the encouragement

I'm happy to brainstorm with anyone willing to join in. Part of the difficulty is how undocumented Daggerfall's main characters are, so it's kind of fun to research everyone's motivations and backgrounds to come up with meaningful things to do with them all.
Come join Lysandus' Tomb, a Daggerfall Unity fan Discord.
In-progress guide for Quest Pack 1 here.
Top

Something to reduce the number of visits to Direnni Tower would be welcome. Perhaps the "restful" dust could be acquired from a different location. You could get one of those visions that it has been stolen and you have to hunt down the thief. Or we could just meet Medora in another location.

Jay_H wrote: ↑
Sat Jun 08, 2019 6:24 pm
This wouldn't change anything about the main quest's final outcome, but it would make a much more robust pathway there, and would add more events along the way.

Seeing your reputation as a quest creator, I cannot but further encourage you to continue.

Absolutely agree. I haven't completed the main quest in DF but I know enough to welcome such improvements and even more. The more robust, detailed and thought through the better.
Interest in expanding and improving the Magic system, Capitalism and an Unleveled World.

Planning to return to Roads too in the coming months.
Top

theJF wrote: ↑
Sun Jun 09, 2019 8:28 am
Something to reduce the number of visits to Direnni Tower would be welcome. Perhaps the "restful" dust could be acquired from a different location. You could get one of those visions that it has been stolen and you have to hunt down the thief. Or we could just meet Medora in another location.

Noted. My plan for now is
Spoiler!
Lord Bridwell is willing to tell you what happened to Nulfaga, but he needs a favor to prove your trustworthiness. He sent a regiment of soldiers to check on her some time ago (what became Concern for Nulfaga for the player) but, she knowing the location of the Mantella Crux, in her madness teleported them there. (This foreshadows the final dungeon way before classic does so.) He needs you to bring them back from Aetherius. Not sure how that'll happen yet but it's the idea. Once you do it, he'll tell you to find Lord Coulder, who knows both the location and curse of Medora Direnni. Visiting her at her actual location might be entirely optional; maybe someone like Charvek-si can enchant an item to lift the curse of the tower, and then Medora can accompany you directly via teleportation for a short leg of the journey.

Maybe Direnni Tower shouldn't be completely optional... I'm weighing it for now. It would be a waste for the player to never, ever go inside. Perhaps Medora needs the item to undo the tower's curse.
Come join Lysandus' Tomb, a Daggerfall Unity fan Discord.
In-progress guide for Quest Pack 1 here.
Top

Reading this made me thinking of 'how would the emperor install a spy network into these various houses?'. What if there were some deep cover spies and no one really knows who they are and you need to use some method to contact them and find information on the royal families. Perhaps some of the information does not actually directly advance the main quest but does increase the royal families reliance on you. This might even offer multiple paths to complete the main quest. Imagine the Emperor's agents are isolated in cells to prevent them from being found out and you have to prove your legitimate need for them to reveal themselves and risk being killed.
Remember always 'What would Julian Do?'.
Windows 10 Pro 64 bit. DFU Ver. Alpha 0.10.7
Top

This, definitely. I plan on having multiple ways of completing the questline... Perhaps one path that's loyal to Wayrest, another to Sentinel, another to Daggerfall, and so on for various factions. Each would have ways to accomplish the main objectives of
Spoiler!
finding Lysandus' tomb, getting his quest, and getting the totem.
This part of it sounds reeeeally ambitious and wouldn't come until much later, but I want the freedom to exist. It'd probably be a 3.0 version if it comes to be.

Speaking honestly, there are some quests that don't add anything to the main quest story, that I think need to be changed or eliminated: