VMblast wrote:As everyone talking about terrain, models and other overhauls, as this seems to be quite popular forum chat theme, I had an clear artistic vision concerning this. I wrote this in my own topic on this forum but I'll try to condense it here as well.

I really (really) appreciate what's Dave started and doing, for years now and thats rebuilding Daggerfall in new the engine, so that everyting's working at last. So that the game will be playable in the modern age as it was intended. He is rebuilding vanilla, the original, as it should be preserved. He also opened possibilities for moding, which in this case could mean other people could implement upgrades.

My original vision for it was that it would be a heavy upgrade, or better say yet, a complete overhaul. The world would be build with better voxel terrain, better and new proceduraly generated houses/castles/homesteads/farms/villages/dungeons, with real 3D FPS weapons and animations, with complete 3D characters, monsters, flora and founa. So that in the end, the core, the story, quests, lore, numbers, stats, char creation, would be original and working behind the scenes, driving the new chassis. But all ti be in the style of the original, thust preserving its charm and atmosphere, but giving gamers better playability and experience.

I have the knowledge of how exactly to acheve this, as I can do some of the things myself, however it is impossible thing to do, because for it youll need big number of dedicated developers working on this as full time job. Just as you would for any other game, because this would be like building a new one. lol

I'm interested VMblast but don't believe it's feasible.
Not even Bethesda can do it.
Otherwise they would not be shrinking the game world each time.

For me, i imagine 'Daggerfall Re-Mastered' includes handpainted sprites.
Sure, it would be nice to see everything in 3d. And years ago i thought the same way as you do.
But after painting sprites i find them endearing.
Infact, today i believe that the sprites and the artwork projected onto them, are part of the culture of the game.
Find my Vibrant Terrain Flats mod at Nexusmods: https://www.nexusmods.com/daggerfalluni ... ?tab=files
Top

Biboran wrote:Downsize not vey good option for me. It be different game - best way just join HR427 sup-project of Project Tamriel for tes3.

Maybe for some would be a bad option, but it would be an option non the less, I'm talking about a very big mod not a change in the base project.


I'm with VMblast in that regard, I like Daggerfall as it is, but there is a potential for something much impressive and exciting there, an interesting exploration experience, 3D characters that wears the equipment they have escaped, different appearance for different weapons and armor, no more fatigue in insanely intricate dungeons.
My Deviantart page, I have some Daggerfall stuff in there.
Top

I think Daggerfall's huge size can be a good worldbuilding challenge. There is no way that a player can get familiar with the entire map, but maybe they can find a couple towns and villages to travel back and forth from on a regular basis. If we are able to create points of interest and quests localized in a single area, it could be a great way for a player to explore and get to know a small area.
Top

Don't think that by downsizing the world is going to fall short, Daggerfall is huge, even scaling it down to a 50% will leave an insanely huge map. I think the whole Tamriel continent in the scale of latter TES games can fit in a 20x20 pixel space of the original DF height map.

Believe me, there's no sacrifice to it but to lose the title of the bigger map in the video game world, our minds can't actually hold a good idea of the dimensions of the map, we are talking insane distances.
My Deviantart page, I have some Daggerfall stuff in there.
Top

I know that Daggerfall is massive

, but that is part of the reason why I like it so much. Knowing that you will never be able to see everything is part of the charm. Sure, reducing it by 50% wouldn't really change much, but you can also add new ways of traveling across the map more quickly by that point, such as flying or short-ranged teleportation.
Top

In fall.exe, there's reference made to an unknown city called Miletus. I imagine modding Miletus to become a Modern-TES city, with several dozen houses and stores, everything hand-crafted. It would be on an island (maybe on the Islands of the Western Iliac Bay) with rural homes, a smattering of dungeons, and several unique and local questlines. In other words, it would be a Morrowind/Oblivion style area transplanted into Daggerfall.

The way to make the world more interesting is to apply procedural generation techniques for things like rivers, roads and add new content like random encounters & harvest-ables etc. The shrines that exist in Daggerfall pretty much have no use for the player at all offer a great opportunity and could be re-purposed as well.
Top

>there's reference made to an unknown city called Miletus
I belive that this city need be on island east to sentinel, where in game actually only one dungeon because they just forgot to add cities.

Also, as I many times say, my hyperplan to make daggerfall super game by some simple steps

1.Make proper landscape. Half of that done already, but still - this landscape requre texture work, and most probably additional 3d model to look like normal landscape. It "flat" now because has no models - all is just one sine wave where moutians looks not like moutians, no real cliffs and lack of objects. I already post some ideas how to make more detailed generated landscape, like using same methods that used for creating cities or dungeons - create detailed cells of landscape that will create landscape.

2.Daggerfall had dungeon types - howewer, there are very little difference - all they use same generation, same dungeon set and most of the same monsters. Most important thing - make every dungeon type look unicle, by using unicle dungeon set, unicle dungeon gneration and unicle moster types. Like if it called Vampire Haunt - it need look at least like place where vampires live, and had only vampire-related monsters - vampire slaves, gargoyles etc. Some dungeon types may possible make not even dungeons - like prisons, it may be place, where player actually go if he was arrested. After that can be added new dungeon types, related to region by lore - Dwemer, Direnni, Acient Nordic etc.

3.After landscape, there will be a lot ways to add more location of interests between cities/homes/dungeons - like roads, small animal caves, spriggan glades, giants sites, wild orc camps, ruined villages and so on, like already existed in game witch covens that may not even be filled on map - it will add points of interest to player that want to expore map, not just fast travel.

4.Remaking cities is probably most important and difficult task. But start may be easy - all cities created from already existed cells. We may just edit this cells and this immideatly change city look. Most houses and streets in game actually not look like streets and real houses - so, if remade house models (it may even use same textures at first time, just a little bit different model like I think you already imagine how actually real 2-roof typical breton house look

). Smae with interiors. After it done may be start more interesting stuff - at first, hand-craft for most big important cities like daggerfall, wayrest, sentinel to look them even more detailed. Next tasks probably be even more interesting - more additional models and texture sets for different regions. Like different houses for moors, for jungle, for desert and coast regions where in game re-used same sets.

5.More work can be done for unicle regions - Orsinium, Balfiera Isles. Like when you visit orcinium - there ONLY ONE ORC structure in whole province, it be logical if all cities and vilages and all pesants in them be orcs. Same time on Balfiera isles be direnni villages with Altmers and a little bit breton, not only breton villages.

6.Removing so-called "flat people" - is probably more diffecult task. Actually, all that can be maded by sprites - make base nacked papper doll for all poses of redguard/breton male/female and then add sprites that will overdraw some parts of sprites and this will show actual people that wear different armour and clothes. But anyway, same task may be finished by make four body 3d models and then armour for them, that will replace all humanoid enemies and flat people.

7.Of course, add more enemies and remove/remade silly ones! Like High rock full of centaurs, but there no one wolf that pretty illogical. For new dungeon sets like dwemer need they set of the enemies. And so on.


After this daggerfall be pretty modern game that full of content in interesting thing, even world space be same - nobody will call that game empty or boring anymore

For me actually best place to start - Isle Betony. I even made maps of it some time ago. It has so many lore locations and same time it not very big and actually unicle region. 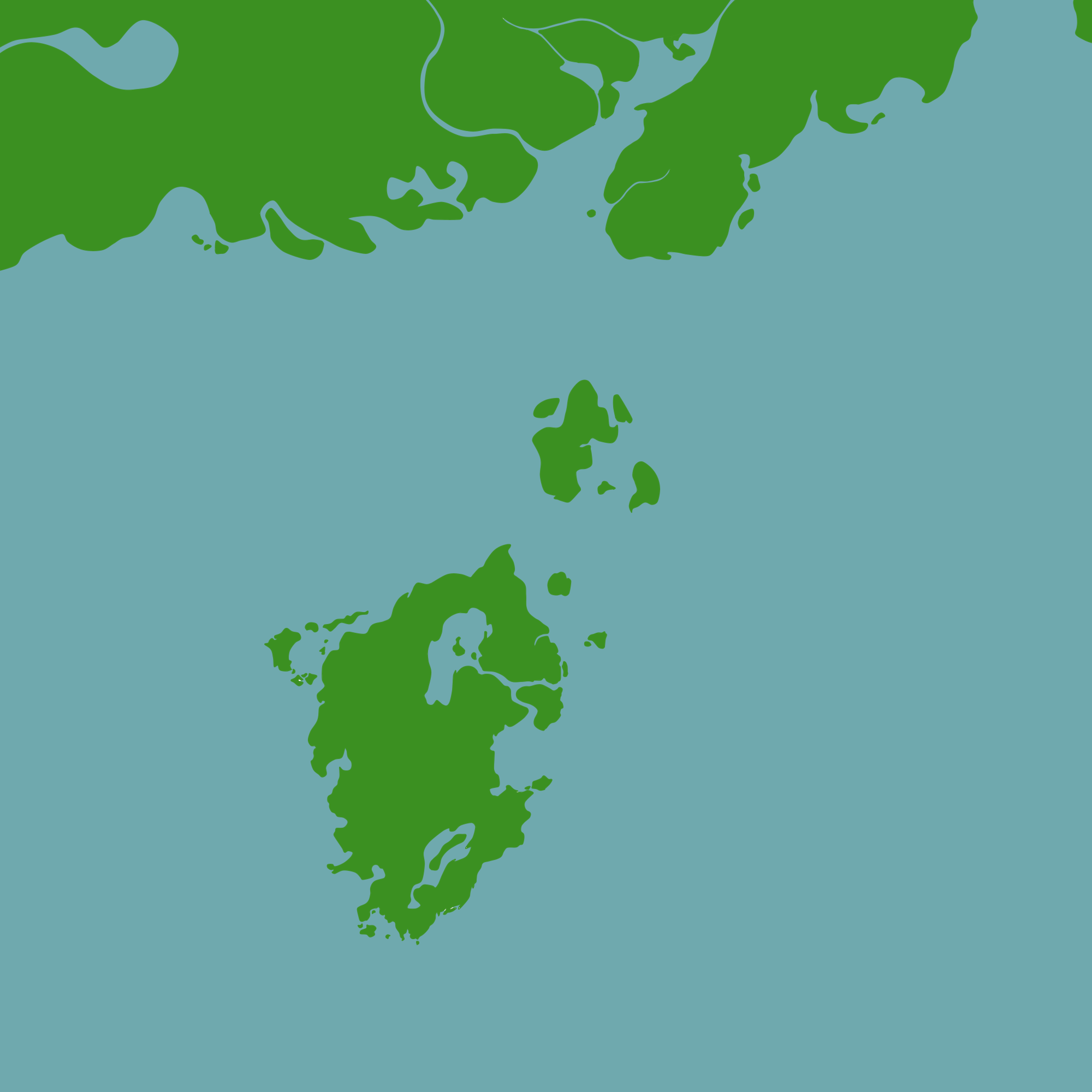 As @LypyL said, key is to have it all to be proceduraly generated. Just as creators of the original Daggerfall imagined and envisioned. The tech of 1995 was their limit than and they did the best they could. However today with modern engines (like Unity) and andvanced coding techniques, this shouldnt be that of a problem. Rather it would be a creative challenge.

It is not true that you'll need Bethesda's entire productin team to do it. The reason that they shrunk the worlds of TES was not the "feasibility", it because back then they couldnt make it more "rich" and detailed. So they weighted pros and cons and decided to have it all be custom build and hand placed would be better choice for gamers. However by the Skyrim they literary dumbed it down to the minimum. Dont get me wrong Skyrim is great game, but its totally run down to the ground to accomodate "large" gamers masses. In other word they commercialized it to the core, when you compare it to the Daggerfall, its philosophy and vision for hard-core fantasy RPGs.

The project would need about 10-15 coders (depending of the expertise) and 7-12 artists. Ofc, the more the merrier. However, this is my professional projection of how large actually your studio would need to make full proceduraly generated Daggerfall come to life.