Show off your mod creations or just a work in progress.
Post Reply
111 posts

As for main menu replacer I've made a while ago, I still have it. I want to rerender it again to make it easy to loop (I think I'll keep the latest version - with a book to avoid empty space). The main problem is how to add it into the game. If someone could do it for me, I would be glad to share it.

As for the npcs - I stopped working on them for a while due to rather painfull reaction here on forum and a great amount of real-life things to take care of. I will certainly return to my work when the possibility to add them to the game is implemented.
Top

Don't worry about the NPCs, we all know how hard it is to create them correctly. But it is very easy to fall into uncanny valley. That is why I think we need a solid base around which all characters are going to be build. A system similar to later TES games I think is most suitable in this situation, rather than trying to recreate every single character from scratch.

As for the menu, really hope some of the things from the first version might stay. In my opinion it has better textures, better lighting and shadows, scene feels very dynamic and real, even models look more realistic - candle, dagger, coins, etc. It just has a lot of depth to it. Plus, the menu itself with the selection of options is better centered, it's not positioned at an angle which really looks strange on the main menu.

Latest version is not bad, it's still very good, just seems like a step back in many ways.
Top

Rhymer if you want to get something in game you can start from interiors npcs before working on enemies and towns people. Also animated animals would be a nice thing to see.

https://www.assetstore.unity3d.com/en/#!/content/16687
Mod System documentation - Learn how to create mods for Daggerfall Unity.
Modder Discussion - General help and discussion for the mod system.
Github Issues - Submit a bug report for the game, including the mod system.
Top

Sorry if this comes off as a long reply 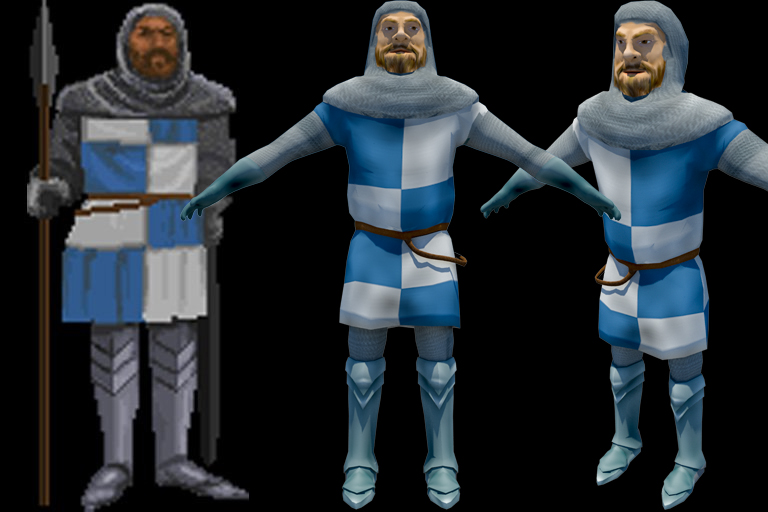 I really like this model of yours, even though it lacks the gauntlets poorly depicted in the original flat. It needs more detailed textures, but it seems to be very good in general. While it does look a bit cartoony, I'd go so far as to say that I absolutely LOVE it. The vampire model, however.....


NikitaTheTanner wrote:
...There definitely is a problem with proportions, the heads look incredibly huge. Also, vampire has a very strange moustache, a pedostache of sorts, if I am seeing it right. The first version looked somehow more menacing and darker, and I love vampires, I even have ideas on how to make every clan quite unique.


The vampire model is disproportionate. It's not muscular nor creepy nor eerie like the original sprite, which is mostly due to the mechanical and un-human way it moved and partially because of the way its arms were spread out (this is common among predators, essentially making themselves look more imposing and larger than they really are). As Nikita pointed out, it has a weird pedostache and the head is bigger than it should be. It even looks strangely cute in comparison to the old sprite. What it really comes down to it, is really just a problem with proportions. You could even keep everything BUT the proportions the same and it'd look amazing.


NikitaTheTanner wrote:
What I think about character models - why invent the wheel? Something like Robert Bodies has been ported from Oblivion to Skyrim and Morrowind by now, maybe even Fallout. Why not use some of the resources created by the community already? We might even grab extra stuff later on, as well as get more people interested in the project. Of course, we should contact mod authors first, but I am sure they wouldn't mind.


This is really the gist of it. Why re-invent the wheel? There are already resources (such as the massively acclaimed Robert's Bodies, as our dear friend NikitaTheTanner pointed out) that can be of universal use at the point of creating the NPCs and humanoid enemies. Sure, SOME specific NPCs might require their own models (such as Nulfaga, given how she looks a bit hunchbacked), but most others are really just normal folks who don't really merit an entirely new body model (this includes the ENTIRETY of the Iliac Bay royals: Gothryd, Eadwyre, Barenziah, Akorithi, etc.). Given how his particular models have been swapped around to pretty much every TES/Fallout game from Morrowind onwards (excluding FO4..... yet), I wouldn't be surprised if Robert approved the use of his models.


rhymer wrote:
As for the npcs - I stopped working on them for a while due to rather painfull reaction here on forum and a great amount of real-life things to take care of.


This saddens me a bit, given how your work (specially the knight <3) really had potential. But if irl stuff is getting in the way of work, I can perfectly understand. However, I don't believe there was any particularly 'painful' reaction to your NPC models. If you upload work into any forum, be prepared for the worst. And even then, pretty much all of the criticism you received was constructive. I really hope you get to work more into the NPCs even if you ignore anything I said, because your work is really good.
People wear socks
Top

About the character models... I think it would be a great idea to use this: http://www.manuelbastioni.com/
It's free and it can be used for commercial purposes so it's not a problem using it in this project.

Watch this videos for more information, 1.6.0 version will be great https://www.youtube.com/channel/UCKBDEs ... 5tw/videos
We only need to implement this bodies in the game and make clothes and armors for them, they can have heigh variations for races and more.
Top

Welcome to the forums Kiba!

Interestingly, the models you've linked to might be a little too high-res for our general use

We had some discussion in another topic about the kind of benchmarks we're looking for, and early 2000s-ish is what most people focused on. My computer, for instance, has no possibility of running high-quality models, and much less so en masse as would occur in a Daggerfall dungeon.

With that said, that's just one branch we've explored. If someone wants to set up a higher-end branch, that kind of variety is the whole purpose of a modding community

Didn't know that, thanks for the fast reply, it makes sense to be fair.
Top

I really like this mod but personaly i think you should make the textures have more detail ie. Instead of flat colors having a colored cloth texture for the clothes
Top

Are you sure polycount cant be reduced? Because this software rocks! So fast and great results. Im downloading it now
EDIT: This just reminded me why I cant do sh1t in blender, damn that thing is so un-intuitive
DREAM Nexus page: https://www.nexusmods.com/users/73250038?tab=user+files
DREAM DFU Forums page: viewtopic.php?f=27&t=1168
Top

Does this still work with the current version of Daggerfall Unity?

I recently installed it and haven't noticed any change in the models.
Top
Post Reply
111 posts