by King of Worms
Ive been tinkering with the Waifu upscaler and photoshop for a while and now Im FINALLY getting not so bad results on the NPCs.

I upscale in waifu 4x, this upscales only the inner side of the NPC, so the outline stays the original low-res. Than I move to photoshop and Refine the edges plus I manually repair the conversion artefacts.

With a bit of efford, this COULD be serialized to some extent. I can mass upscale for sure. The photoshop part must be done manually. Still, this is quite a fast thing. Id say 5 minutes a NPC when I find and set some standardized "refine edge" mode and learn to do it fast - so its much better than redrawing in terms of speed. Theres a room for improvement still, esp in photoshop part with the edge refinement and other adjustments + I can squeeze a bit more detail from waifu at the cost of artefacts, which Im correcting anyway so it doesnt matter.

IMO some parts are deffo better:
- face
- staff
- nicely defined lines on the clothing
- smooth outline thanks to the edge refinement

What I dont like so much is the hair, but its not some disaster

Generally speaking I like the fact its VERY vanilla-like.
I guess the results will vary at each specific NPC upscaled, some being problematic.

Id like to know what u think about the results so far? (maximize the screen)

Oracle - One of the best results so far, original to the right

After some weekend experimentation, this is the best result Im able to get:

by King of Worms
Here the result is not so stellar... the hidden beauty of the face is a bit gone, golden lining is 50/50... but we get some better deffinition on the grey garments, perfect results on the ear rings and golden jewel on the head, nice clean neck and shoulders area, clean highres outline, I removed magenta tint on one of the breasts (important!!) 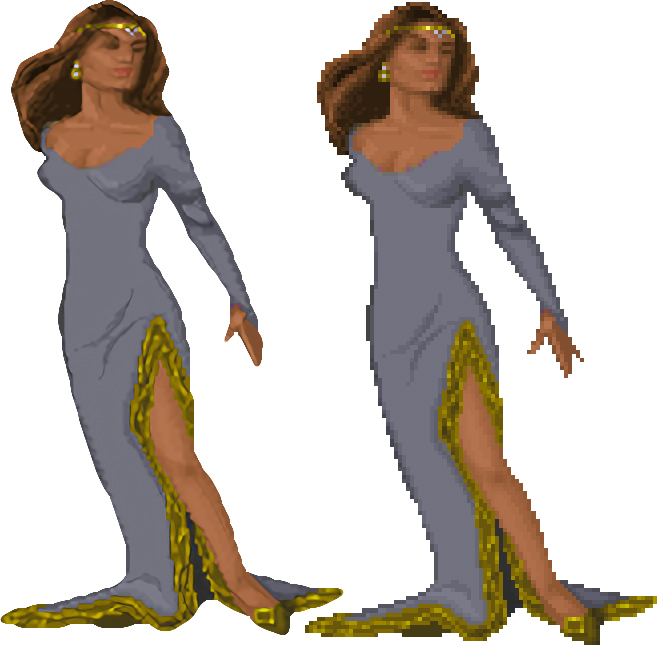 The King
Again... I think we can say the clothing is upscaled well in all screens - here Id smooth out the purple gradient at kings legs tho, nothing hard. With faces, its a hit and miss, same as with facial hair and hair in general. Here I adjusted a beard manualy a bit as it was way too edgy somehow. We always get a clean outline in all cases thats for sure

Its a mixed bag, thats why Im not sure about this. We deffo gain something and sometimes we loose a bit here and there... 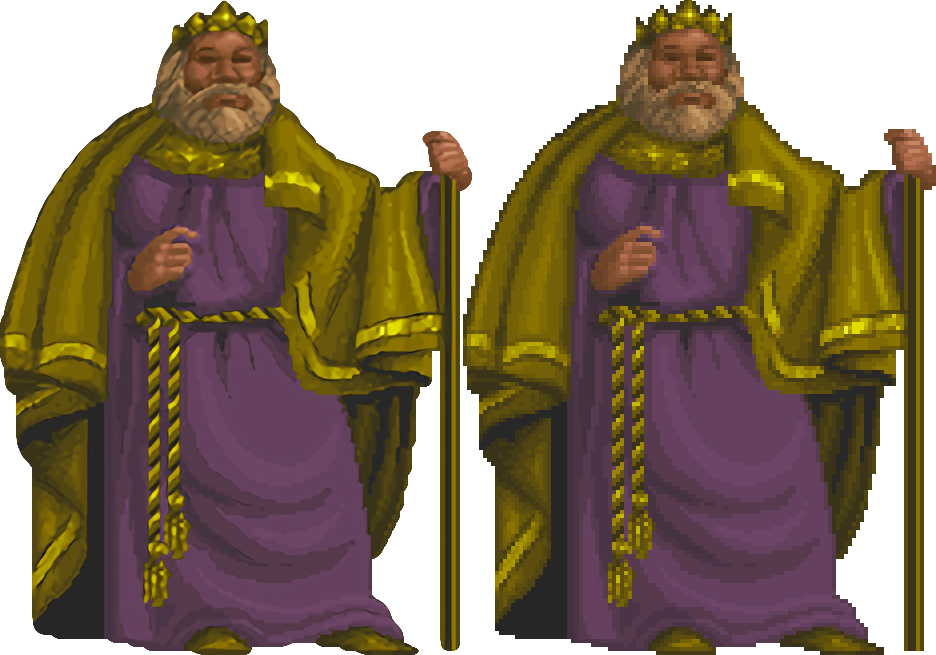 by Midknightprince
As much as I hate to see the old stuff fade away...
These npc's fit right in IMO.
I can't wait to check them out in my game.
Thumbs up from me.

by King of Worms
Well... you can download both pictures and compare in photoviewer, just have em in one folder and open one than press left or right while having it maximized... some things are deffo better. We loose that pixelated look from a distance as it is now 4x higher res (its still pixelated in a close up, when you dont use bi/trilinear filtering in game)

To me it seems we gain detail and some deffinition by this method + the clean outline. Hands look much better, basicaly it looks ok for a fast draft... and this NPC is one of those which dont look the best with this conversion. Unfortunatelly, I cant find Oracle, which seems the best IMO... Deffo worth further experiments. 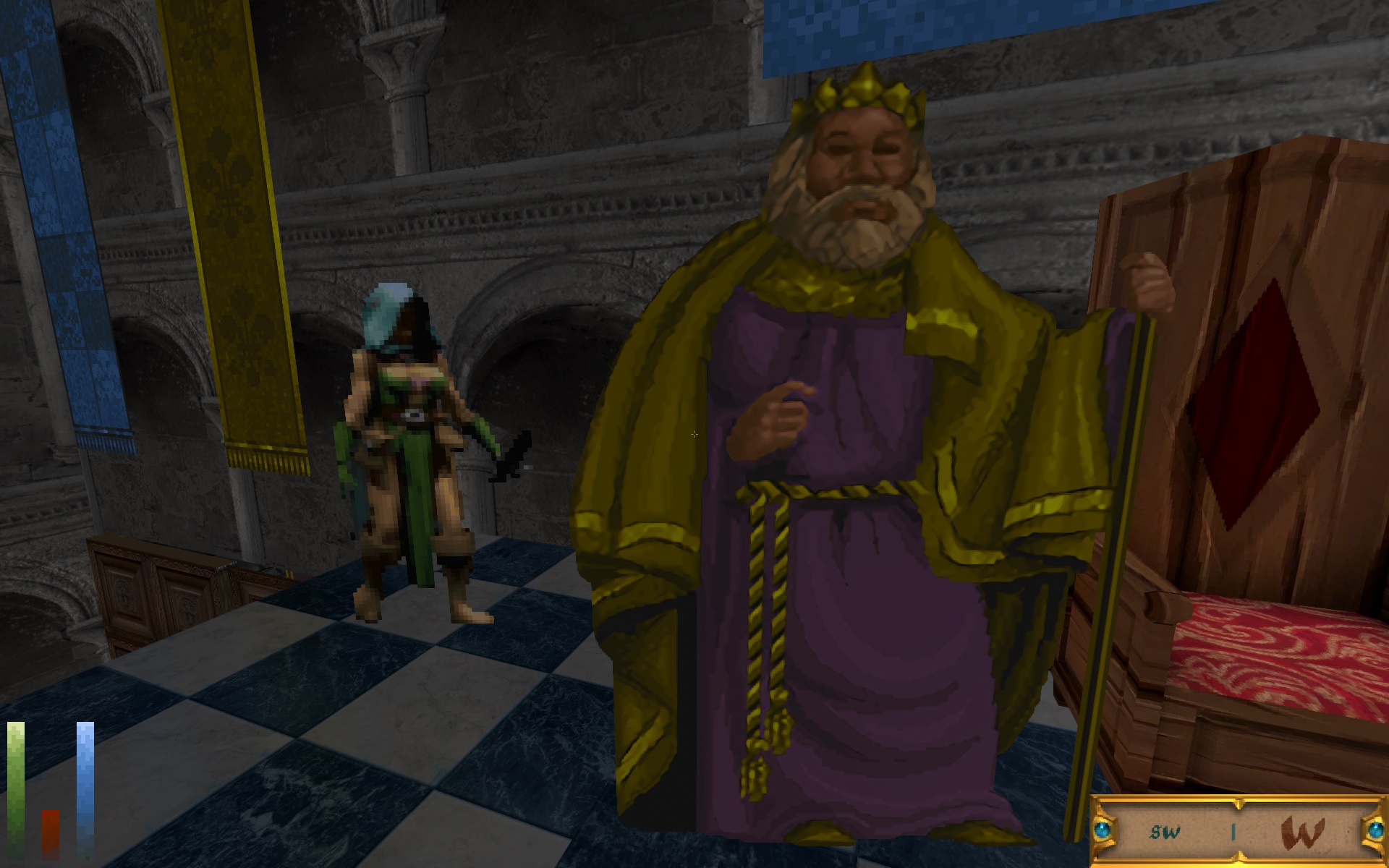 by King of Worms
This dude is low res, as many other less important NPCs... 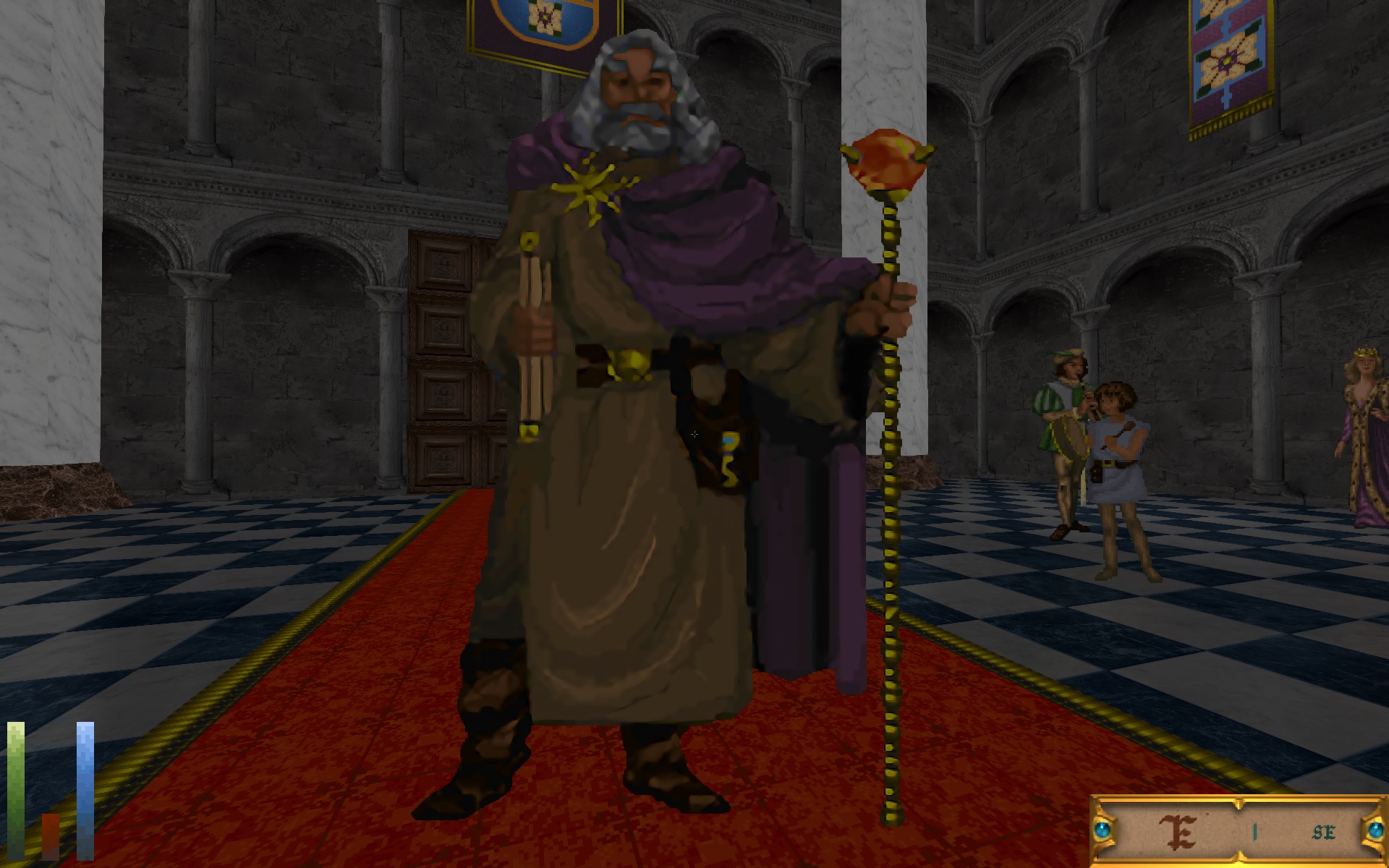 by King of Worms
Ok Ive learned its a hit or miss, some characters look ok, some are unusable (like Morgiah) Also, every NPC needs a bit different approach when creating the refined edge but thats not a problem.

This one is 10x the size of original, the upscaled flat has 4mb - still seems reasonable Id say? 10x size has some better detail when viewed from a close distance and is easier to work with, when you want to manually touch something in Photoshop. Plus if you use bu/trilinear filtering in game it doesnt get blurry.

Anyway, I guess the approach now should be to find the NPCs which work good with this resizing technique and do them in 10x size... And Im ill at home

So I might try to desacrate some more... plus the manual touch helps too, here I can copy the high res face to the staff he holds in his hand to get it to a higher detail for example, etc etc etc 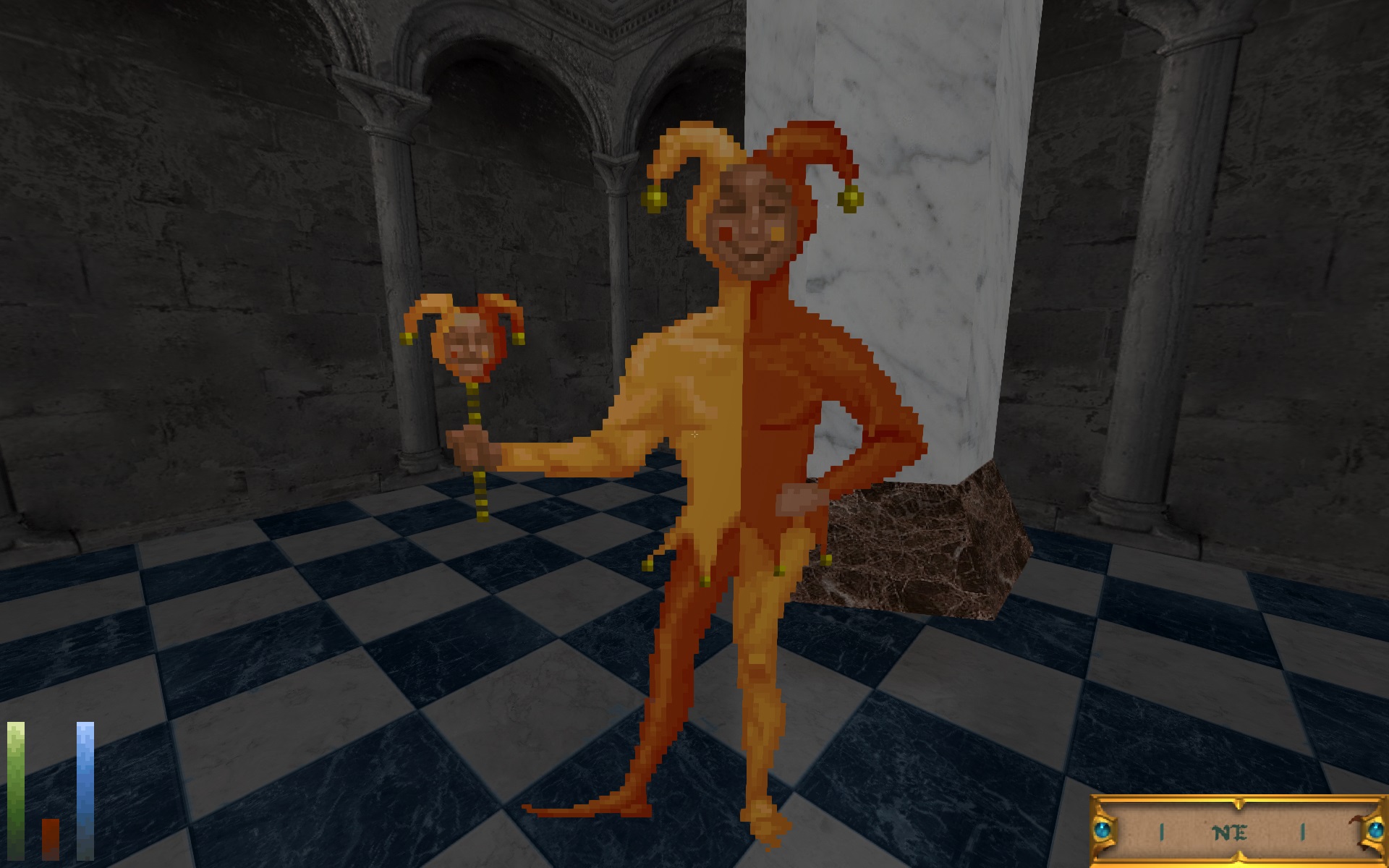 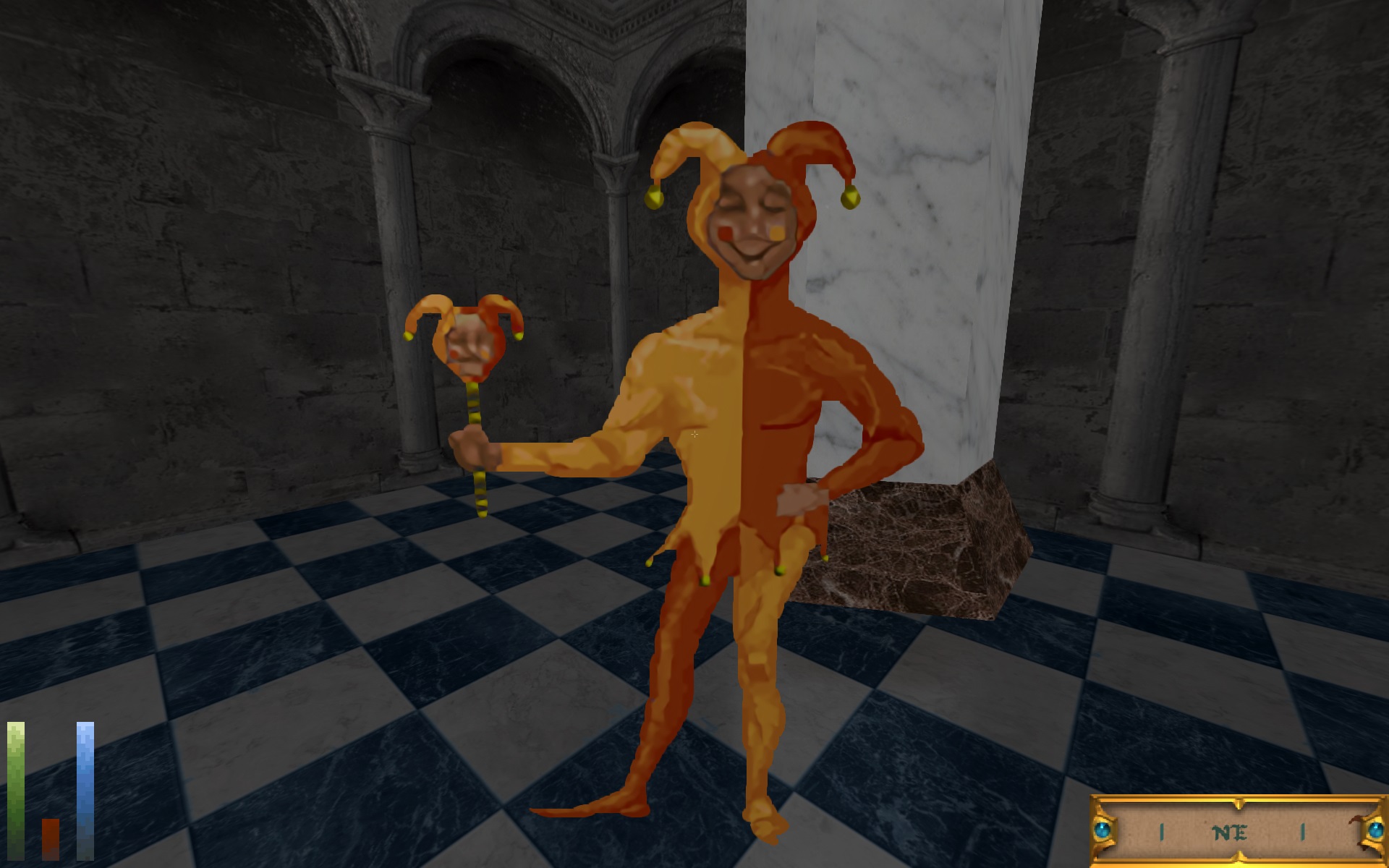 So basically, it will not get much better than this or the Oracle from the 1st screen. This NPC I found suitable for conversion, this is 8x size - 6mb Flat
Maximize, check for yourself and you be the judge please: 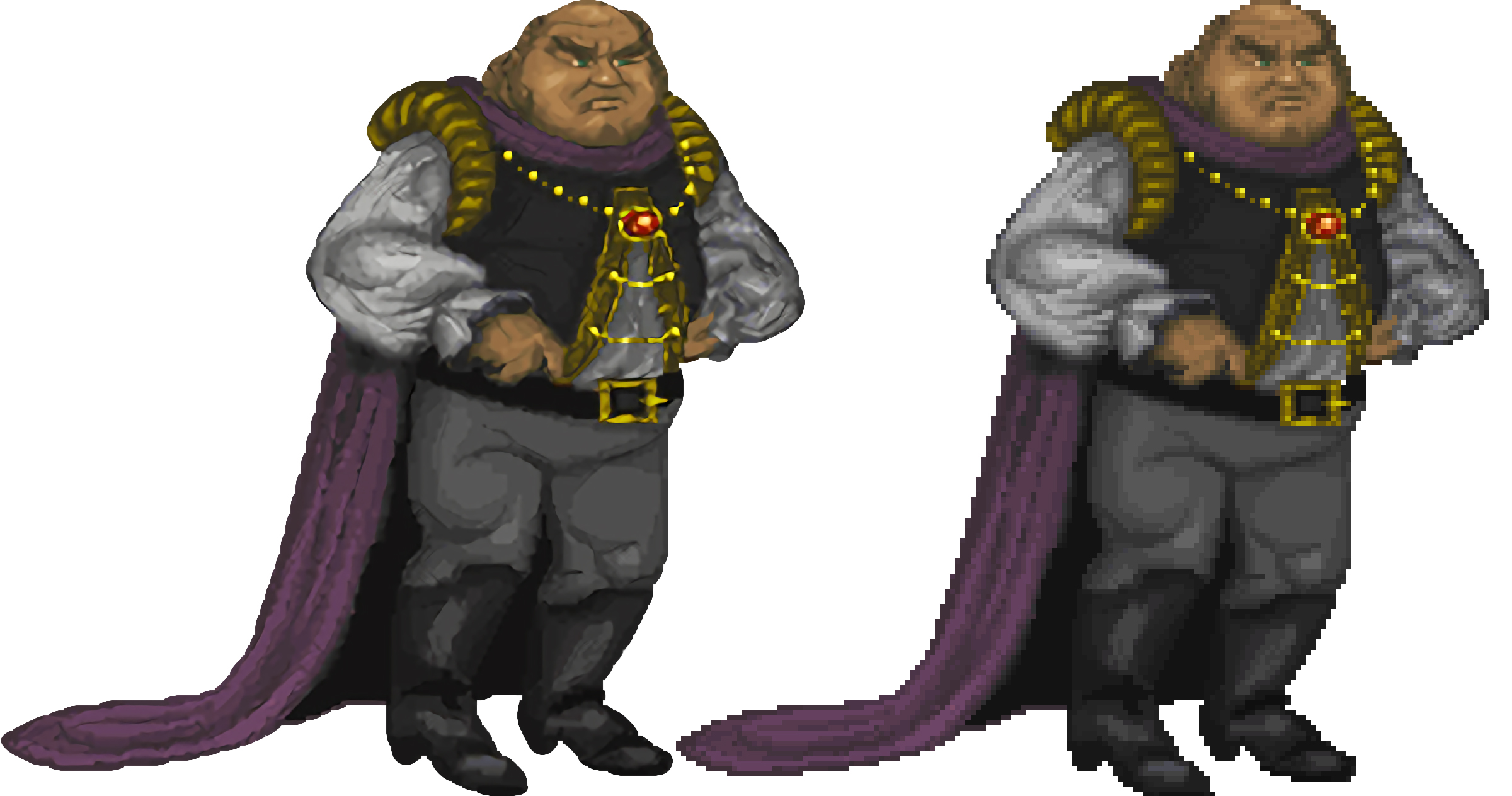 by Aliem
I see this kind of smoothing and scaling as a jumping off point, and not as a permanent solution. They'd need some further hand-drawn refinement, I think, before they're ready for prime-time.

by Midknightprince
I don't think they should be too pretty.
They still need to kinda fit in with the classic flats, that's why I think the roughness fits right in.
Only thing that looked kinda funky was Meseras face (like she was pressing it up against a window or something).
The cloth on Nuflag, the king's cloak , that guy's staff all look pretty nice IMO, and in my mind's eye i can see them looking good in game.
Some NPC's, not so much..
Making them too pretty messes with consistency IMO.

by King of Worms
Thanks for input!
I agree, it must stay as much close to original as possible, that char you linked indeed doesnt work for me as well.

I experimented further, and the results are getting interresting. I use more accurate upscaling method (my gtx970 gets really hot now) and I use dithering. I found out - after comparing tons of upscaling methods - that this one Im gonna post now, results in very vanila like shapes! With previous methods used, princes Morgiah looked really messed up, unusable.

This is almost perfect result on the main NPC, but we lost some detail on the cats head. Its usually like that - something looks great, but some parts might not work so good. Here the ratio of good/not so good is getting very nice. I also upped my refine edge game, but thats hard to notice until you play the game...

I know, that we could get AWESOME results, if someone who can draw, just redefined few things in the upscaled img. Just a small finish touch, few lines, few minutes of time at each NPC... anyone to try that out?

Anyway, here is some comparison on a NPC which is hard to upscale without getting distorsted img!
Also check the shoulders area and other details... note that there are some minor artefacts caused by printing the screen from the game, messing with it, and saving as JPG, so ingame, its a few % better

by Midknightprince
@King of Worms
So basically what you're doing is printing out screens of in game npc's, cutting them out, editing them, them rescanning them to your pc, and resizing them to fit in game ?
Explain this to me, because I can draw.
I'm mostly a lead man but this can't be to hard if you're basically just enhancing printouts on paper (and that's what I'm understanding here).
Just giving it a shot on a few NPC's sounds tantalizing.
So what do you end up editing them with (paint, marker), what , and can't I just resize the img in paint ?
Up to this point I understand this, if I'm assuming correctly.
One thing, Morgiah should be a dark elf