From what Ive gathered from the internet is, that the ideal LOAD TYPE setting for music is STREAMING
Its according to THIS, paragraph 4
https://paladinstudios.com/2012/07/30/4 ... nity-game/

It states the following:
These are our rules of thumb for optimal performance when it comes to different types of audio:

Problem I face is the following:
With this settings, the music doesnt play after a 1st load?
You initialize the game to the base menu - no music
You load 1st save - no music
After 1st load (for example you enter the Inn from exterior) - music starts to play correctly and continues so for the rest of the gaming session

Any ideas why is it so?
Is "streaming" really the ideal setting for a music files?

Compressed In Memory
Keep sounds compressed in memory and decompress while playing. This option has a slight performance overhead (especially for Ogg/Vorbis compressed files) so only use it for bigger files where decompression on load would use a prohibitive amount of memory. The decompression is happening on the mixer thread and can be monitored in the “DSP CPU” section in the audio pane of the profiler
window.

Streaming
Decode sounds on the fly. This method uses a minimal amount of memory to buffer compressed data that is incrementally read from the disk and decoded on the fly. Note that decompression happens on the separate streaming thread whose CPU usage can be monitored in the “Streaming CPU” section in the audio pane of the profiler window. Note: Streaming clips has an overload of approximately 200KB, even if none of the audio data is loaded.

I USE THESE SETTINGS:

Music:
Load in background
Streaming
Preload audio data is not available for streaming 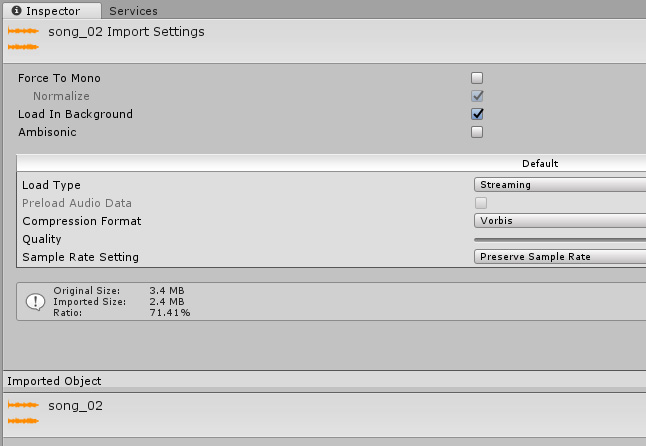 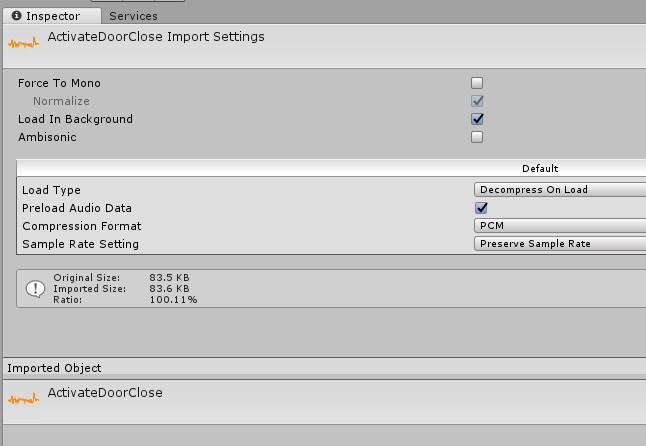 
ANY OPINIONS AND RECOMENDATIONS FOR A OPTIMAL PLAYBACK FROM A DFMOD?
Sounds work great with this setting.

Well done! You've really taken to getting assets packed within the Unity editor and solving problems. I was playing with DREAM the other day, and I'm impressed how far its come. DREAM looks better, loads faster, and is something like half the size (or less) of the original versions. Amazing work all around.
Top