I want to upscale the vanilla sky textures

I mean... a classic feel wouldn't have trees visible a mile away. I think the proper way to remake the skies would be to not use textures for everything. Simply code the sky to do all that gradient shifting and color changing and darkening that a sky does. Then your textures of clouds and celestial objects have transparent backgrounds and are applied against that.
Top

I did some tests using undither back in March.
One problem I had was that they didn't use classic Floyd-Steinberg algorithm for dithering (only some, more broken, error diffusion dithering), so on some images there's noticeable diagonal "bleeding" that this program couldn't adjust for. Check the large dark cloud in the image below: 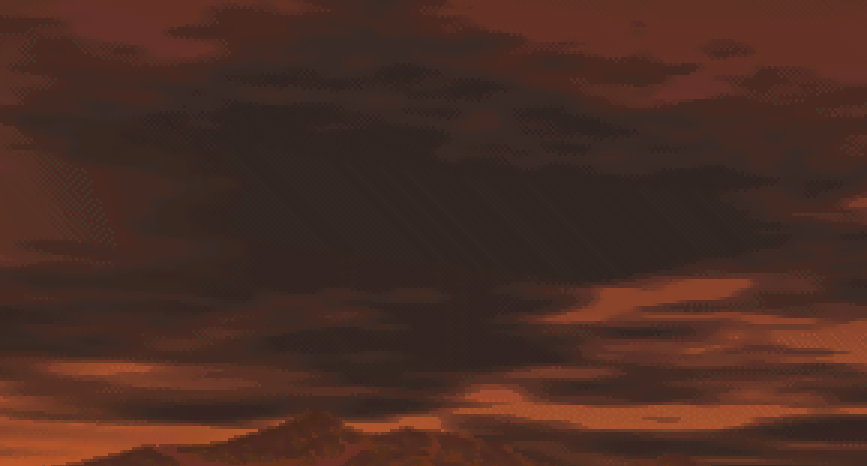 That's where I stopped my investigation at the time. Modifying those images beyond maybe such small fixes is difficult, because you should be able to modify all the variants of the same landscape/clouds/etc. the same way, and they're 1920 images to go; People that suggest that are welcome to try by themselves, it's hard,
It would quickly becomes easier to generate new skies from scratch, but that requires to understand how exactly each part of those images vary with time (color palette, clouds density, sun's position and transparency effects,...)
I considered for a second scripting something using POV-Ray but I haven't done anything with it in 15 years, I quickly gave up...

Anyway, here's what I got with just that program, I hope you can find it of use:
https://ufile.io/y0qgmiki
When a measure becomes a target, it ceases to be a good measure.
-- Charles Goodhart
Top

I upscaled some of these last year as a proof of concept. Had some nice results using waifu I guess. Todsy I have more options including Ai. Thing is, as long as I cant see results ingame, its not worth the efforts and I have better things to do in regards to DFU.

I hope the progress will be made and this part will get more open for modding.

Ps: with this amount of images any manual input is out of question

PSS: run a quick test, waifu is still the best option IMO, AI was not that stellar