My vision of this graphics overhaul would incorporate my Sprite Write (formerly called "Spriter") utility as an optional setting to render the 3D model as a customizable faux sprite.

I have been so excited since I saw the first posts about Spriter. I'm glad it lives on as Sprite Write and I think it could allow for the best of all worlds - full (or almost full) 3d for the modern types, and convincing sprites for a more classic feel, with the benefit of proper lighting maps, easy editing of clothes or gear.

I hope you and concarne can move forward together. After the AI upscaling, 3D is really the last frontier.
Top

So I haven't tried to integrate UMA into DFU, but I created a little mock-up project just to see what kind of results we could expect from it. 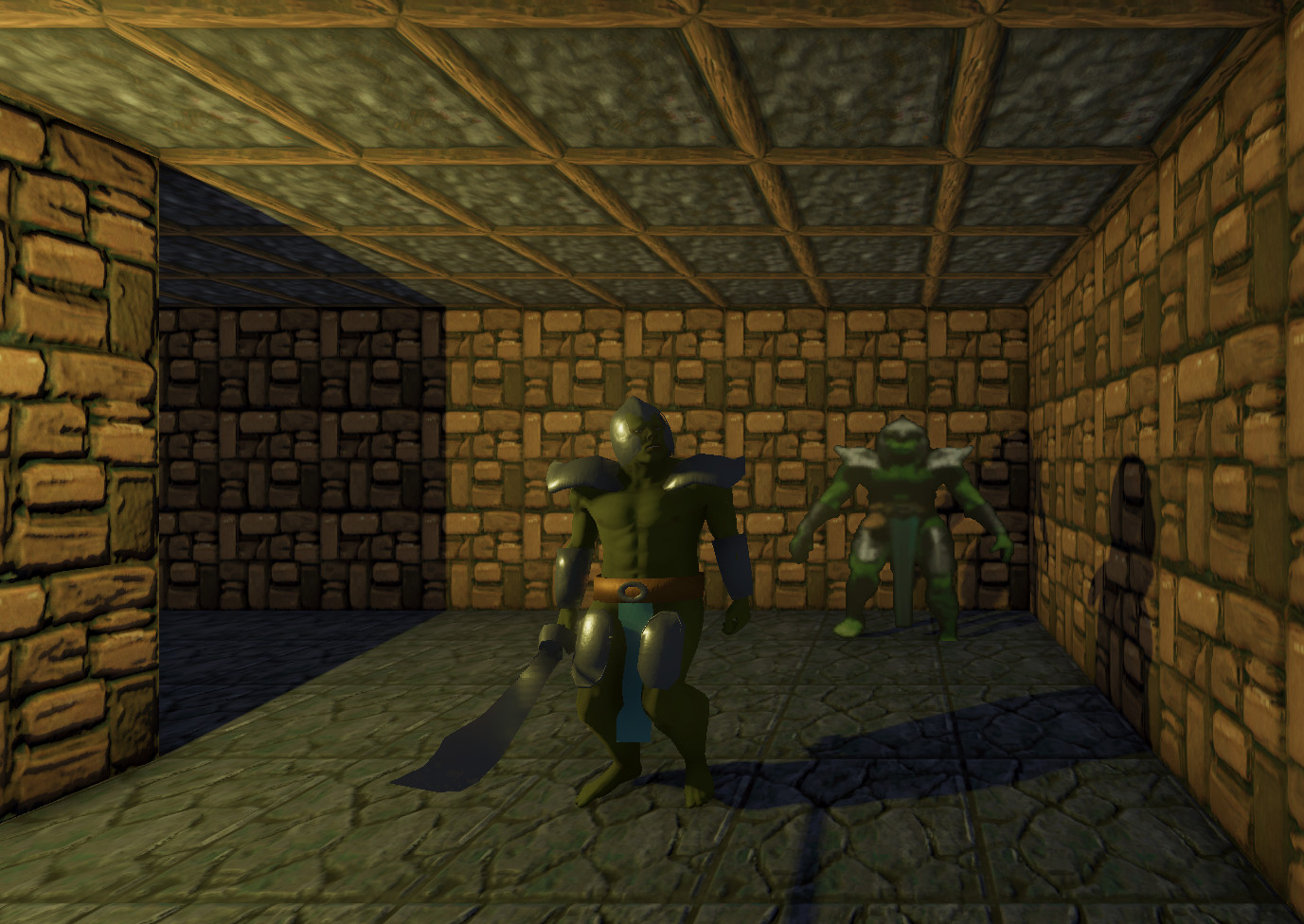 First of all, I'm god-awful at modeling, so the helmet, armor, and weapon are crap. Secondly, the animation is just the default mechanum idle animation which has a very upright stature and is nothing like Daggerfall's orc wide and hunched stance. A custom animation would make it look much closer to vanilla.

The point of this is that using UMA, we would only need to worry about modelling armor, weapons, clothes, etc., and make a few animations, and not have to worry so much about modelling humanoids.

I should point out that the attached screenshot does not have SpriteWrite enabled.
Top

Impressive to see the model ingame

Just to be clear, this orc mesh is not in DFU. This is a separate Unity project with just UMA, Sprite Write, and Post-Processing Stack V1 installed. I added some PVE textures just to show the Orc mesh in context to Daggerfall.

I'm going to work on UMA in this stand-alone project first to get more familiar with it before I try to integrate it into DFU.

Then I will work on mobile NPCs since TheLacus has implemented support for replacing their billboards with game objects, so I should be able to just use the SetPerson method to initialize the UMA Race, DNA, and wardrobe recipe data to some presets that closely match the vanilla graphics.

Once I get that part working, I'll refine Sprite Write and see if I can package them together as a dfmod.

Then I'll branch out to NPC flats, then humanoid MOBs.

Oh I see, well this is a ambitious project but I have no doubt you can surprise us all once again!
Even if you do just a few working models, it will pave the way for others to follow
DREAM Nexus https://www.nexusmods.com/users/73250038?tab=user+files
DREAM Forums viewtopic.php?f=27&t=1168
DREAM FACES https://docs.google.com/document/d/1fRI ... sp=sharing

Totally! If the technical things get sorted out, there is always the option to use improved or new art assets. Similar to how the upscaled textures just kept getting better. It's everything that has to happen for them to show up properly in-engine that's tough.


MasonFace wrote: ↑Mon Mar 09, 2020 3:01 pm Then I will work on mobile NPCs since TheLacus has implemented support for replacing their billboards with game objects, so I should be able to just use the SetPerson method to initialize the UMA Race, DNA, and wardrobe recipe data to some presets that closely match the vanilla graphics.

Whoa, I missed this. So you're saying billboards could be replaced with new sprites or even 3D models?

Either way, I look forward to more posts when you're further along.
Top

So it took me a while to wrap my head around how UMA works, but it doesn't really work the way I think most people (including myself) think/thought it does. I assumed that it is just a utility that can be used to generate a static 3D humanoid model. In actuality, it creates the mesh only in real-time and it is completely dynamic. While the game is running, you can change every parameter of its DNA such as height, eye spacing, head size, arm length, etc., in real-time just like the character creation screen in Skyrim.

Quite frankly, with enough work, this could be used to usurp the vanilla DFU character creation and paperdoll systems.

I'll tell you that I'm very excited for all the cool options and effects that this will open up for characters.

Once we have a library of clothing, armors, weapons, hair models, ect., any other humanoid could also use those. That means that NPCs could change their clothes, or at least the citizens can display far more variety. MOBs could show what armor and weapons they have equipped. NPCs and MOBs could have completely unique faces and have variation in height.

This also opens up really cool effects. For example, the orc in the above picture is using Unity's cloth physics on his drapes so they should move around realistically as he moves. And I've also attached a real-time reflection probe to give his armor realistic reflections. The possibilities are nearly endless and I can't wait to explore it further.


Whoa, I missed this. So you're saying billboards could be replaced with new sprites or even 3D models?

Yes. In fact, if I understand correctly, you could even replace a billboard with a particle system if you wanted... It's just looking for a game object. So chances are you just need to create prefab with a script that can do something with the incoming SetPerson arguments: (race, gender, personVarient, isGuard). I think this applies to townsfolk and the city guards.
Top

This will be some next level update

I can only imagine one day all the NPC, enemy and paper doll sprites transition to fully 3D. This will be the ultimate RPG lol
Top

My brain reading that