Improvements to this are on git now. I was forgetting the SetAssignedPlaceSymbol() call after placing Person from "create npc".

However only two of the four are showing up for some reason. I can confirm all _friend1-4_ had their lastAssignedPlaceSymbol set to their home Place symbol when "create npc" was called. Not sure if this is on my end on yours and too tired to dig in any further.

Here's a screenshot with a couple of these NPCs now visible from "create npc". The top one is the actual questor who was already showing up before this change. 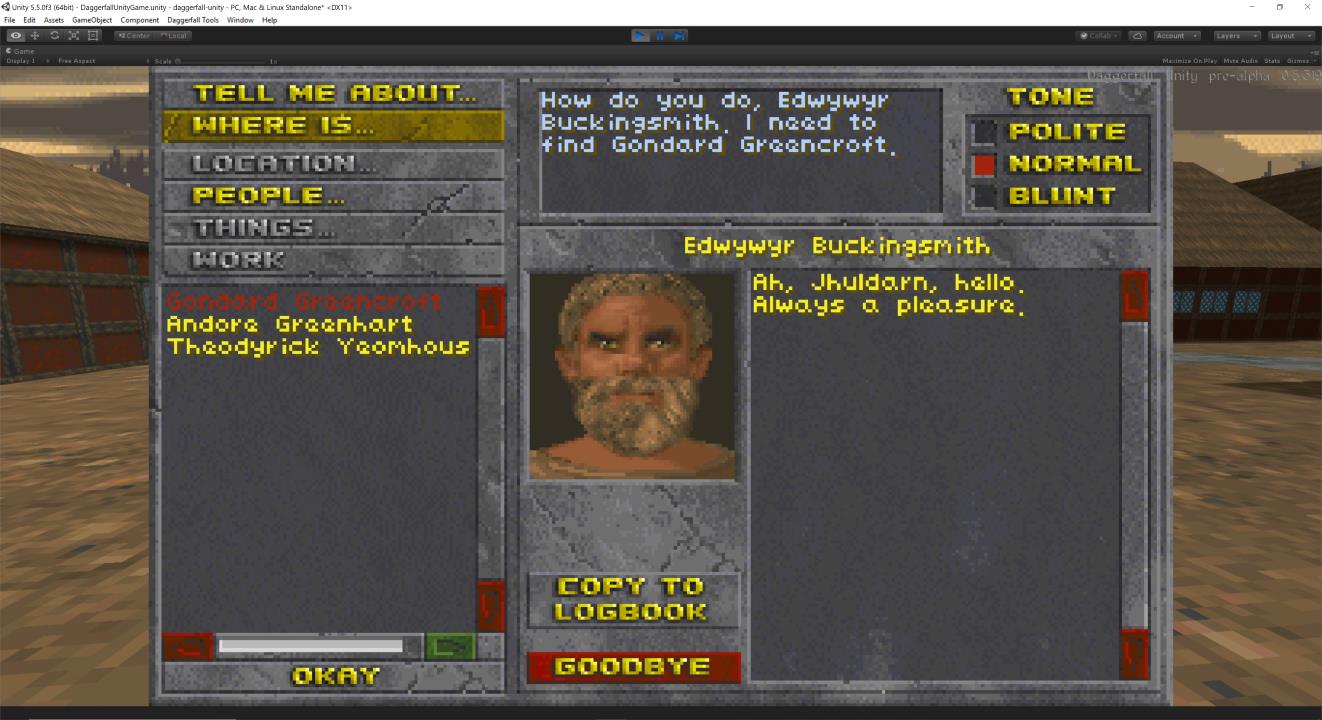 
One more thing. I've added a public boolean property to to Person resource called DiscoveredThroughTalkManager. I thought you might be able to use this to get/set when a Person has been revealed through talk system. This is serialized with the Person resource as expected.

Not sure if this will be helpful at all. If not, I'll just remove it again later and we can look at a better solution for you.

2 out of 4 being available is correct, the other two are hidden by dialog link command.
The hidden ones should become available when pc learns about them in answer messages given by the first two. Though this might be broken at the moment. Cannot test at the moment though
Top

Looks like you guys have been rather busy this weekend, great progress from what I gather from reading the thread.

Interkarma, can't recall when or in what context we discussed this (prob. in a PR on github) but this was the thing where I'd added some code into person.cs (was commit 29 march) to get the DB joining quest to work a bit more than it did, but while the NPC was auto added to the correct type of building still differed from classic in that it was not an existing NPC - i.e. shopkeeper. I think from reading that this will now be fixed, but I thought I would mention in case it's helpful.
See my mod code for examples of how to change various aspects of DFU: https://github.com/ajrb/dfunity-mods
Top

Nystul, of course! Sorry didn't consider the dialog link. My brain was melting by that point.

Thanks Hazelnut. I'm hoping that all still works in a way the player can complete quest. I tried to make improvements as well for local building support. I haven't tested DB joining yet since the change though.
Top

My talk window doesn't recognize %pcf as the PC's name, and just prints %pcf in each case. Is this an undiscovered bug?
Come join Lysandus' Tomb, a Daggerfall Unity fan Discord.
See the Daggerfall Unity Wiki on the UESP.
Top

This worked in the past. Unfortunately there seem to be several regression bugs due to contributions recently. E.g. It is currently not possible to talk to the npcs in orsinium dungeon and scourg barrow. Unrelated to talk window other things are broken as well like fog settings being changed repeatedly to hardcoded values and thus breaking mods. My plan is to fix those issues one at a time but I can not give a date when this will happen since my time is limited at the moment.
Top

What's the issue with NPCs in Orsinium and Scourg? I'm about to head to bed, and can't look at this until tomorrow.

I'm happy to help though if it gets the problem fixed sooner. I wasn't aware of these ones.

Thanks for the heads up.

I'm happy to help though if it gets the problem fixed sooner. I wasn't aware of these ones.

Thanks for the heads up.

currently I am working on sdf font rendering on exterior automap.
Top

Nystul wrote: ↑
Sun Sep 09, 2018 5:38 pm
an exception is thrown in GetReactionToPlayer function - I guess it is not a big issue

currently I am working on sdf font rendering on exterior automap.

Thanks for letting me know. This issue came up now that faction data is all 0-based. I tried to find all the cases where this could go wrong, but had forgotten about this property. Fixed now, and hopefully that's the only real glitch after that change.

Let me know if any help needed with the SDF stuff.
Top