So after playing Daggerfall for the first time around a year ago (haven't beat it rl got in the way) and finding out about unity afterwards I been lurking ever since without an account until now. I just want to say mods like these is really making me hyped up for unity so thank you

I do have a question could skill checks with multiple results be added for quests like JHPQ017: Perpetual hostage quest? I could see bunch of different variations to this kind of quest.

Some examples I can think of would be like

Illusion maybe you get some flavor text about going invisible so when the fight starts out maybe the npcs spawn farther away while you now have an invisibility spell now active.

Well I think you get the point I just like the idea of the hostage quest but if you don't think its needed for this quest I understand.

(Also you can have multiple flavors of this quest not just orcs like maybe something with necromancers capturing you because they need fresh test subjects or some vampires that want to use you as a blood cow etc...)

Welcome to the forums!

Thank you for the feedback. Knowing people are playing the quests (especially while DFU is incomplete) is always great motivation. Your ideas are good and I'll go through them step-by-step to show some of the limitations on the system right now.


Hazed wrote: ↑
Thu Dec 20, 2018 5:50 am
I do have a question could skill checks with multiple results be added for quests like JHPQ017: Perpetual hostage quest? I could see bunch of different variations to this kind of quest.

Yes in general terms. I try to avoid springing up major bad surprises on the player since I've been in games where you just get railroaded in a bad way, and that significantly reduces the fun factor for me. In its current form PQ017 offers a choice: risk your life trying to run from the orcs or accept defeat and try to find your way out of the dungeon. Which one you choose really depends on your character, your situation, your health level, whether you have a Recall stored away, and so many other factors.

If I add several negative buffs for something the player couldn't control nor reasonably foresee, such as a failed skill check, I feel as if that's a strike against the entertainment value. Players like being in control. If bad and inescapable things start to fall from the sky, they're more likely to uninstall the mod than to work themselves around it -- masochists aside.

Part of my response comes from the fact that not all of DFU's effects are in yet. For example, I can't yet apply spell effects to the PC or to enemies. That means my options are still limited, since the ability to, say, cast a Continuous Poison effect on the PC for failing a Dodging check is still non-operational. That'll change in the future, but for now there aren't many effects I can manipulate in response to a skill check.

Something not immediately apparent is that PQ017 actually has a skill check available: try resisting capture when your Orcish skill is above 40

However, your suggestion can be well applied to an effect I implemented previously. If you surrender, there's a 50% chance you'll be afflicted with Stomach Rot due to the capture. I can instead make that depend on Medical skill, which would be a good part of choice-based narrative rather than probability.

Before leaving this point, there's the minor matter of echoing quest actions. Until now I've had to be careful not to present too many skill checks at once, since they could spam up the window and cause multiple simultaneous choices, which Daggerfall can't handle easily. However, I'm thinking up a method to use a cascading system of skill checks that could get the job done. I'll have to give it a shot

With the exception of the court system, Daggerfall only makes room for death itself (and death by proxy, which is fatigue loss). If someone later enabled a way to get captured as a result of health loss, that would open massive possibilities

This opens up the question of using a system of prompts once you have the necessary skill. One limitation is that Daggerfall only uses yes/no prompts so getting into a more complex decision than that can be difficult. But it's an idea worth digging into.


Some examples I can think of would be like

Illusion maybe you get some flavor text about going invisible so when the fight starts out maybe the npcs spawn farther away while you now have an invisibility spell now active.

These are good ideas, and similar to some things I've been applying to some quests Kamer and I have been sharing for Warm Ashes. Hazelnut, the dev who designed the skill check system, has made great emphasis on including them as much as possible, and I've been failing that somewhat

Just to give an example, one of the events in Warm Ashes is that an enemy mage randomly appears nearby and raises two skeletons to attack you, but if you have sufficient Mysticism, you dispel the two skeletons before they can attack so only the mage is left. Another example is that you arrive at a graveyard but a vampire is there looking for prey; if you have a high enough Thaumaturgy level you can pacify it to either get the first strike or avoid it (a high enough stealth level works similarly). Long story short, there are a few things that can be done. For now, until the spell system is more fully connected to quests, these are the major points about what I can do:

* Pacify enemies (make them stand still and not attack)

* Give the PC an item or take it away

The quest system has certain limits for now, though I'm very happy with the wide variety of things Interkarma and others have provided. Some of the quests I've designed have been specifically due to the limitations and how I've been able to bend them around. One that I was quite happy with was the engine bug I used to create the Death's Embrace quest, as played by Midknightprince

Once the new builds come out I'm going to use a function of the Teleport action to trap the PC in a dungeon until the quest objective is achieved... which I haven't quite decided yet.

I'm always happy to listen to other people's proposals for quests, though many of them are quite ambitious for the current state of the quest system. The Quest Prompt thread is a repository for myself and others to store up ideas that we can return to as more effects get added.


maybe the npcs spawn farther away

This one's out of my control, since the quest system determines this strictly. But some of the other ideas here compensate for it.


(Also you can have multiple flavors of this quest not just orcs like maybe something with necromancers capturing you because they need fresh test subjects or some vampires that want to use you as a blood cow etc...)

I definitely agree. I've recently thought that my quests are a bit too unique, and should have some everyday variations to make them more realistic. I intend to make some additions in this manner.

An example of the Necromancer event could be getting paralyzed if you resist, except if your Restoration or Dodging skill are high enough. It allows choice and variety. I can't paralyze the PC yet, but as time goes on, that'll become available and I'll start using it. (Interkarma has planned to make quest effect spells "god moded," so they'll even go through PC resistances and immunities. It'll be great! 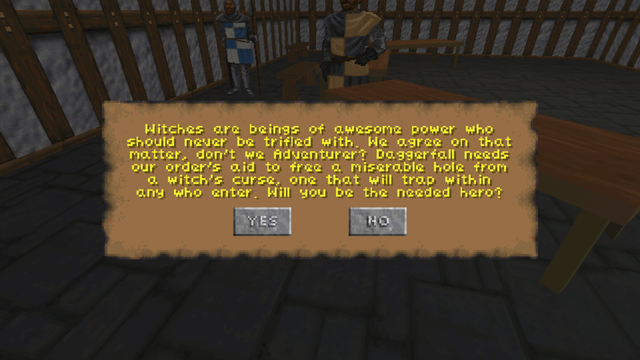 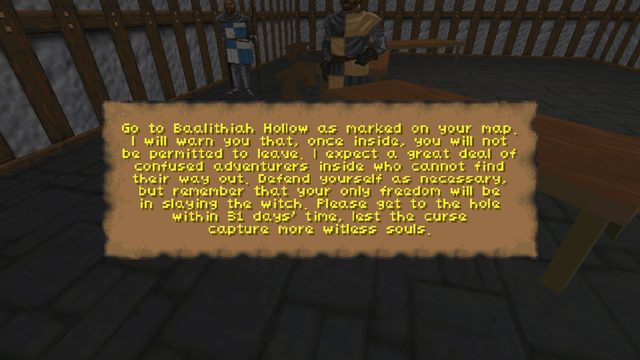 The mechanics on this are still being worked out, but there are workarounds like loading an older game or fast traveling if it gets bugged out. For this reason I'm confident enough to publish it.

At some future point perhaps someone could add in the capability for the Teleport action to send to houses, graveyards, and palaces. That would open up more possibilities for trapping

(I'm getting an idea now to trap someone inside Daggerfall or Wayrest castles as a prisoner. There likely isn't anything to do beyond that initial idea, though.)
Come join Lysandus' Tomb, a Daggerfall Unity fan Discord.
In-progress guide for Quest Pack 1 here.
Top

Thank you for the detailed answer man

With the exception of the court system, Daggerfall only makes room for death itself (and death by proxy, which is fatigue loss). If someone later enabled a way to get captured as a result of health loss, that would open massive possibilities

(I'm getting an idea now to trap someone inside Daggerfall or Wayrest castles as a prisoner. There likely isn't anything to do beyond that initial idea, though.)

I could imagine this being used on a new mod that allows you to escape from prison maybe? like you get a random event while waiting out the prison time asking you if you want to escape
Top

That's the real core of DFU: the potential really is unlimited. I'm not a programmer so I can't add features on my own, so it's a matter of seeing if anyone has time and motivation enough to do so. But even without additional features there's an amazing array of things the quest system is capable of right now

The closest possible trigger for that is an "injured" condition, where an action fires when the enemy is injured. I could make the prompt appear when I first injure the enemy, or make a timer of about 5 or 10 seconds and then make it show up in the middle of the battle. As yet there aren't conditions based on the player's health. But you can start to see that with a little creativity there's still plenty to do

I should mention guards and crime work in current DFU, but I can't access them through the quest system.
Come join Lysandus' Tomb, a Daggerfall Unity fan Discord.
In-progress guide for Quest Pack 1 here.
Top

You say you would like some custom quest actions that test player health Jay? You should email me a list - see if I get bored over xmas.

Music to my ears

I'll come up with a few basic ones in a little while. Thank you for the offer

I've sent a list of what I could think up.
Come join Lysandus' Tomb, a Daggerfall Unity fan Discord.
In-progress guide for Quest Pack 1 here.
Top

Hey when do I update the quest pack it's been awhile ?
Do I need to update ?
Check out my YouTube Channel!
Top

Yeah, I've been making a lot of changes. I just recently consolidated PQ1 and PQ2 into the same folder, so now there's just the Perpetual folder and the Quest Pack folder. That'll make updates easier. I'd say at least once a week as long as I'm publishing quests.

As soon as a quest shows up in this thread, I add it online