Though I haven't been posting them, I've added more content over the last few days. I'm figuring the current screenshot method doesn't really say much about them, and to show more than I used to would create spoilers

So here's the summary since last update:

These new perpetual quests are quite simple, following a format I came up with last month. They're really just intended to spruce up the Daggerfall experience with some unexpected non-sadistic events.

The two most recent Knight quests are much larger and use a new system I came up with this weekend to plant multiple events in the same remote city. It's worked out quite well in testing. Potentially, a single quest could move the PC from one city to another, gathering clues and mopping up problems and then moving on to another city to continue on. Could be something to consider.
Come join Lysandus' Tomb, a Daggerfall Unity fan Discord.
In-progress guide for Quest Pack 1 here.
Top 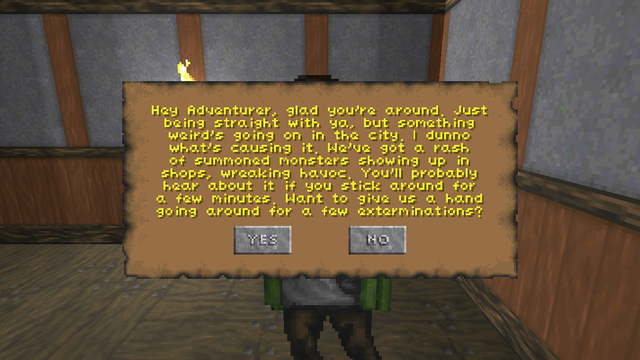 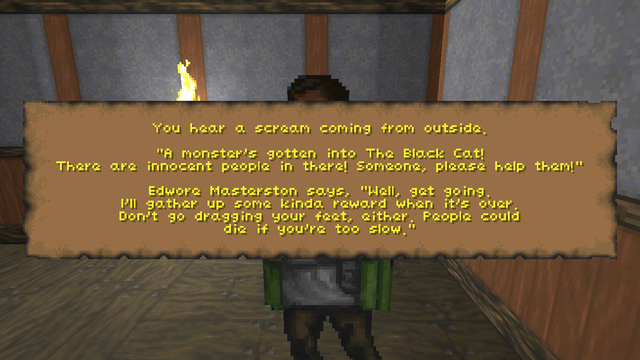 This is a quest I'm posting particularly because it attracted attention when I first attempted it. I found out how to do workarounds to avoid the bugs it used to suffer from. I feel like this is legitimately fun, and I ran through it a few extra times just for the enjoyment of it. I believe it's going to be quite a challenge for some of the weaker and slower characters out there, and I look forward to the reactions that come from it.
Come join Lysandus' Tomb, a Daggerfall Unity fan Discord.
In-progress guide for Quest Pack 1 here.
Top 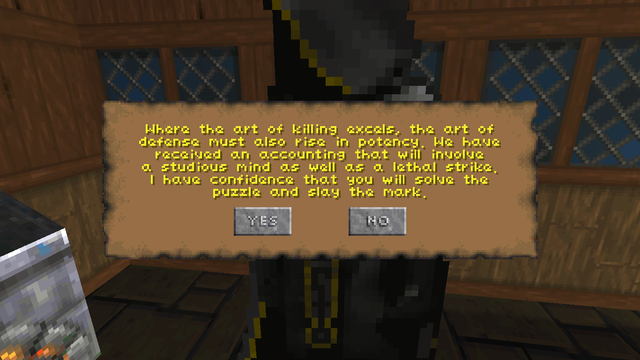 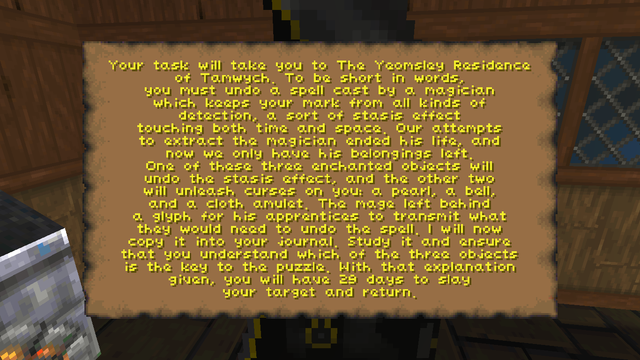 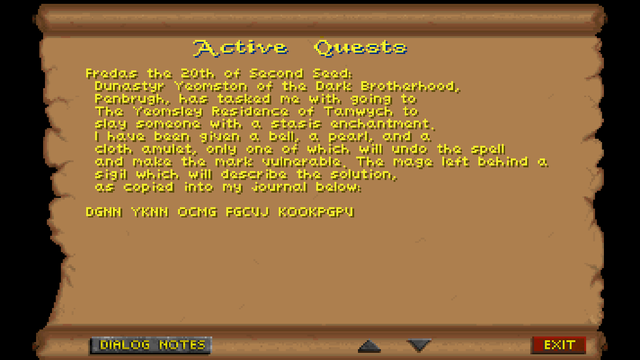 The particular mechanic at work here is unique to Daggerfall among all TES games. It was a pleasant surprise to me, and it's another case where I'll be quite curious about the feedback. This is a good example of how we can move away from the Fedex quests people describe in Daggerfall.

The screenshot above might seem to be a spoiler, but there's a lot more at work under the hood than screenshots will show.
Come join Lysandus' Tomb, a Daggerfall Unity fan Discord.
In-progress guide for Quest Pack 1 here.
Top 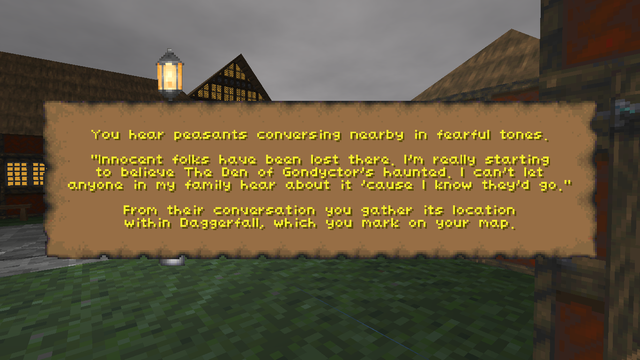 Hahahaha. Wow, I am not touching this quest again. It was quite simple to put together and the mechanics are very satisfying so I'm happy with it as a product.
Come join Lysandus' Tomb, a Daggerfall Unity fan Discord.
In-progress guide for Quest Pack 1 here.
Top

Surely Daggerfall's quests are a little too deterministic. I'm using a model that blinds you to what the quest is actually going to be. It draws from one of 3 quests at random, and you won't know which one you get until you're in it.

This really sparked something for me. I think it's amazing that Daggerfall's plot is so threadbare when it has so much to draw from. There's so much background to illustrate, so many side interactions that could be had with major NPCs, and yet Daggerfall takes advantage of almost none of it. Only the Commoner quest "Background Information" actually links your random meandering with the main quest.

I recognize the general incoherence of the NPC's dialogue, but I can come back and fix that later.

I've been keeping most of my updates to myself, but I wanted to publish this one in particular. It's a recreation of the tavern quest introduced by a custom quest pack for classic, I think Die By The Sword. There are a lot of other events I could include in it, but I just ran out of ideas for now. Suggestions welcome. What's shown in the video below is just a small sample of the actions that can fire during it.

Based on our discussion in Discord, I decided to revamp JHFG003 enormously. It used to be a simple matter of killing an enemy of the King. Now it has a ton of different outcomes. I'll just showcase a few here.

Sometimes your enemy's more than ready for you: 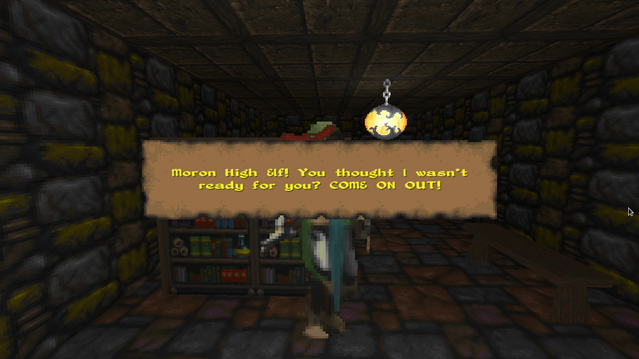 This time, the foe's already dead. How'd that happen? 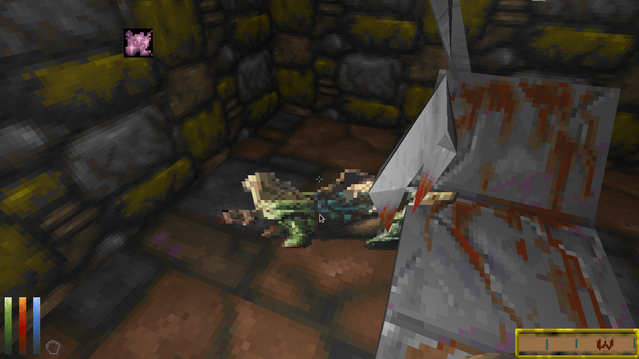 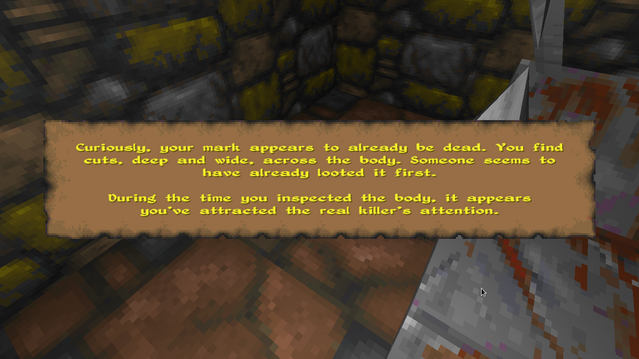 Other times, a life can be worth a lot: 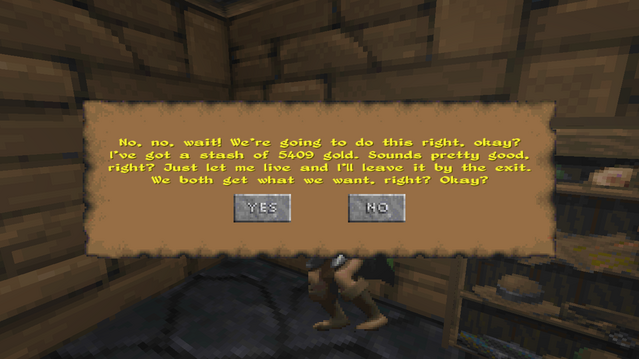 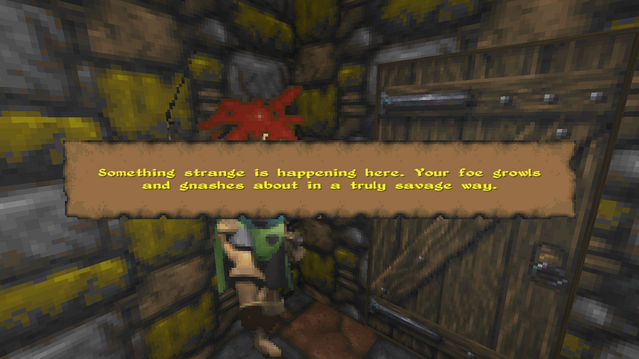 And then you find out why: 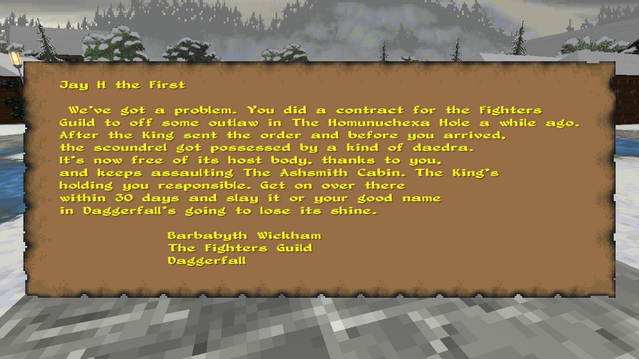 Up until now I've been in a rush to make a lot of quests, but now I've seen from other players' experience that they're a bit shallow. Once you beat a quest, there's nothing to go back for. I want unpredictable, surprising events; I want players who boot up DFU wondering what's going to happen this time. I'll be rewriting a lot of the old stuff and trying to make them worth playing once and again. Quality over quantity, as Hazelnut would say.
Come join Lysandus' Tomb, a Daggerfall Unity fan Discord.
In-progress guide for Quest Pack 1 here.
Top

You're definitely on a journey here my friend, and everyone will benefit from your quest work with these cool branches.
See my mod code for examples of how to change various aspects of DFU: https://github.com/ajrb/dfunity-mods
Top

I just want to second Hazelnut here, you doing awesome job!
You adding the meat to the dish in terms of a real gameplay and content!
With your quests, it will be a pleasure to dive into the game fully once again.
I do not do it now on purpose, I want to wait for a finished product and spend some months in it. I guess this winter?
Incredible!! Im here since v0.2 and before I put so much hopes in DaggerXL to no avail
Thank you