No, you can only pre-define a number for that. You could set multiple ones using "pick one of" to make it a little more varied, but you can't choose a random number from X to Y.
Top

I assumed as much, but thanks for the confirmation.

I have another question ... more a problem really.
As part of my Prostitutes and Lovers Quest Pack I want to add a quest that makes the prostitutes in the game always proposition the player when clicked while the quest is open. Using the "faction aFaction available" and "repute with anNPC exceeds nn do aTask" conditions and the "start quest" action.

Here's the QBN section I've come up with so far:

The quest startup works fine, as do the tasks from the _qgiverclicked_ task that make up the end of the quest. Everything else inbetween does not work.. I know that all the quests that are called with the "start quest" action work fine in their own right, but I can't get them to work via this quest.

Are there any obvious mistakes I've made? Or is it just that the prostitutes aren't a fully functioning faction?

Any insights or suggestions will be gratefully recieved.

You're trying things that are beyond my experience, so I can't offer much. I put your quest file into VS Code and got this: 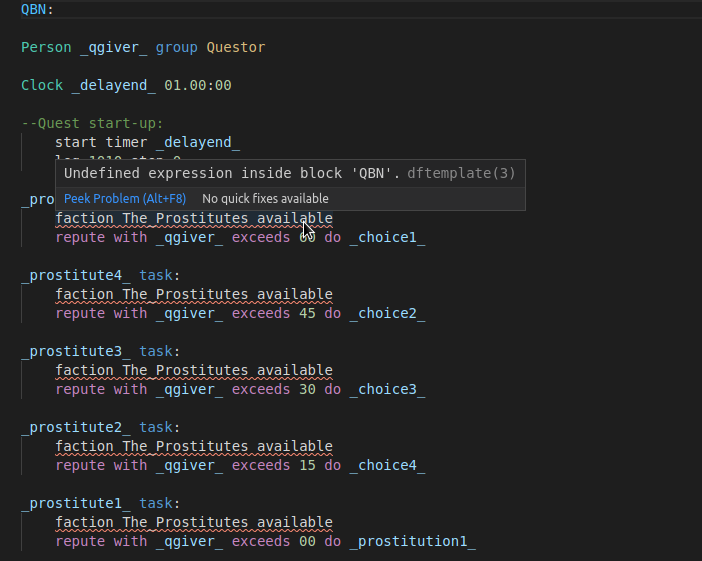 
Checking faction availability
when aFaction is available
This condition checks whether the specified faction is available for assignment as a questor in an upcoming quest that the present quest would like to schedule. nnn is either a faction number, or the proper name of a faction. See the Person command for the complete list of factions.
This condition is triggered by the player clicking the mouse on an NPC sprite associated with the specific faction in the game world.

The main quest monitors the availability of NPCs connected with the main story before attempting to schedule a new subplot. The player triggers this check by clicking on the NPC sprite that corresponds to the specified faction.

Some permanent NPCs play a role in several different subplots. To avoid inadvertently scheduling a new subplot which uses a permanent NPC in a starring role while the same NPC is already starring in an active quest, the monitor quest checks whether the desired NPC is free at the moment, to schedule their entrance in the upcoming subplot.

Changing it to the "when... is" format removed the problems in VS Code for me.
Top

Yeah, I tried that already. I tried it again just in case, but the quest doesn't even seem to start running at all with "when The_Prostitutes is available" in place of "faction The_Prostitutes available". I'll keep testing it to see if it runs, but I'm close to giving up on it ever working properly.

I've tried every combination of the "faction available" and the "repute at least" conditions mentioned in Donald Tipton’s documentation, but I can't seem to get any of them to work with this quest. The quest starting and closing properly is the most I've been able to get it to do, and that only with the way its presented above, but it never actually schedules any of the other quests its supposed to. That's why I was wondering if it was a result of The_Prostitutes not being a proper faction.

Thanks for having a look at it though.

Okay, I've got another quest related question for you. When declaring a quest related place at the beginning of the QBN section ... Place _temple_ remote temple ... for example, would select a random temple in the current region. Is there a way of specifying a type of temple, like The House of Dibella as a quest location?

Not currently, but it may be really very easy to add. Try adding this dibella entry into StreamingAssets/Tables/Quests-Places.txt

I think that should work, let me know - it's just theory. However you would really need to ensure the quest was only offered in regions where Dibella temples exist, otherwise the quest setup will fail. Not sure how you would ensure that because it depends on a lot more context about what you're doing.
See my mod code for examples of how to change various aspects of DFU: https://github.com/ajrb/dfunity-mods
Top

Okay, thanks for that. That gives me something to to work toward when I'm expanding the script in my mod for the next update (I'm also trying to make prostitutes in taverns always offer certain prostitution quests when clicked).

RE sacred prostitution,, though at the moment I've got it so non-members are pointed to "travelling" missionaries of Dibella that can be in any temple ... it would be really useful if I can make it so you are sent to an actual temple of Dibella rather than a random temple - any problems caused by there not being a House of Dibella in the region may mean I have have to abandon that idea.. We'll see.

Update on my Populated Buildings mod.
Hazelnut doesn't seem to have found a solution as of yet, but I SORTA managed to get it working, but not quite. If I manually start the PBMASTER quest through the console (instead of trying to start it through the PB-STARTUP quest), it kinda works, so I guess I could fix that by simply getting rid of PB-Startup and just initialize PBMASTER as soon as the game starts. However, it only seems to spawn NPCs at armories, like this one:

I have no idea why, as I checked the Quest IDs and filenames multiple times and everything seems to be in order. I honestly have no idea what's going on. I gues I'm gonna try to write a new one for a different type of building and see if it has the same issue.

So... yeah. I'm kinda happy that at least PART of the mod seems to be working, but I'm left with more questions than answers.
Released mods: https://www.nexusmods.com/users/5141135 ... files&BH=0
Daggerfall isn't the only ridiculously intrincate fantasy world simulator with the initials DF that I make mods for: http://www.bay12forums.com/smf/index.php?topic=177071.0
Top

Sometimes the quest format is strict enough that it bugs out with certain errors. If you can post the files, someone might be able to see.

Also, the startquest console command only works on quests inside /StreamingAssets/Quests. It can't read from Questpacks.
Top
Post Reply
252 posts