To be obliged, to translate Daggerfall menus, to do pixel art in order to draw text in any language over the existing 320x200 menu images written in English that are into the classic Daggerfall is not satisfactory. It would be clearly better to write text with an image editor over images with no text. So I've written to King of Worms to ask him if it could be possible to start from the DREAM images that are into the hub & menus mod in order to try to convert them to another language (French for me). I asked him too if he had in hand "naked" images so that we just have to add texts in our respective languages. I received the answer the same day and the answer to both questions were "yes" and "not really".

Yes, we can translate the DREAM menus images, and KoW send me all the needed PNG files that are into the mod in full resolution (bigger ones are 1920x1200). We agreed that the property of the translated images would stay to DREAM and we will see when the time will come how these images shall be distributed.

Not really, because KoW agrees that he did not think to a possible future translation when those images were drawn, so he did not kept the naked images in their final state. He send me some images with no text, but most of them are just first project, not in the final resolution and not as clean as the final images. Which means that few of them are usable.

So the statement is that we are authorized to translate DREAM images, but to achieve that, three tasks are to be done:
1 - Find a way to suppress the English texts from the DREAM images in order to obtain empty menus.
2 - Find how to produce golden texts in relief as they are into the DREAM images.
3 - Write the texts with the font used in those images. For that KoW send me the file Daggerfont.otf that was used, but we will see that it is not sufficient.
In charge of Project French Daggerfall and DaggerfallSetup, dev. of DFTools in English.
French translator for many Warband mods and Bannerlord.
Top

1 - To empty the DREAM menus

KoW realized his works with Photoshop but I do not have this expensive tool, so I decided to try to use the free open source image editor GIMP. Image manipulation on computer is not really part of my knowledge. I'm for sure able to do all the basic image transformation with standard filters but I'm not a specialist, so I was wondering how it is possible to suppress texts and to keep a background coherent with what is around.I shared this issue on the Daggerfall Unity channel of a French discord dedicated to Daggerfall, and Pango, well know here and that contributed to some content in DREAM, gave me the solution. The magic GIMP plugin is named Resynthesizer. To be short, we just have to select a rectangle around the text, launch the filter Heal Selection... and the text disappear, replaced by a background as if the text was never there. Very impressive!

Now that the way to empty menus from DREAM images is found and mastered, I will just have to empty all the needed images that are roughly one hundred. I learned how to use this filter on the inventory image, here is the result: 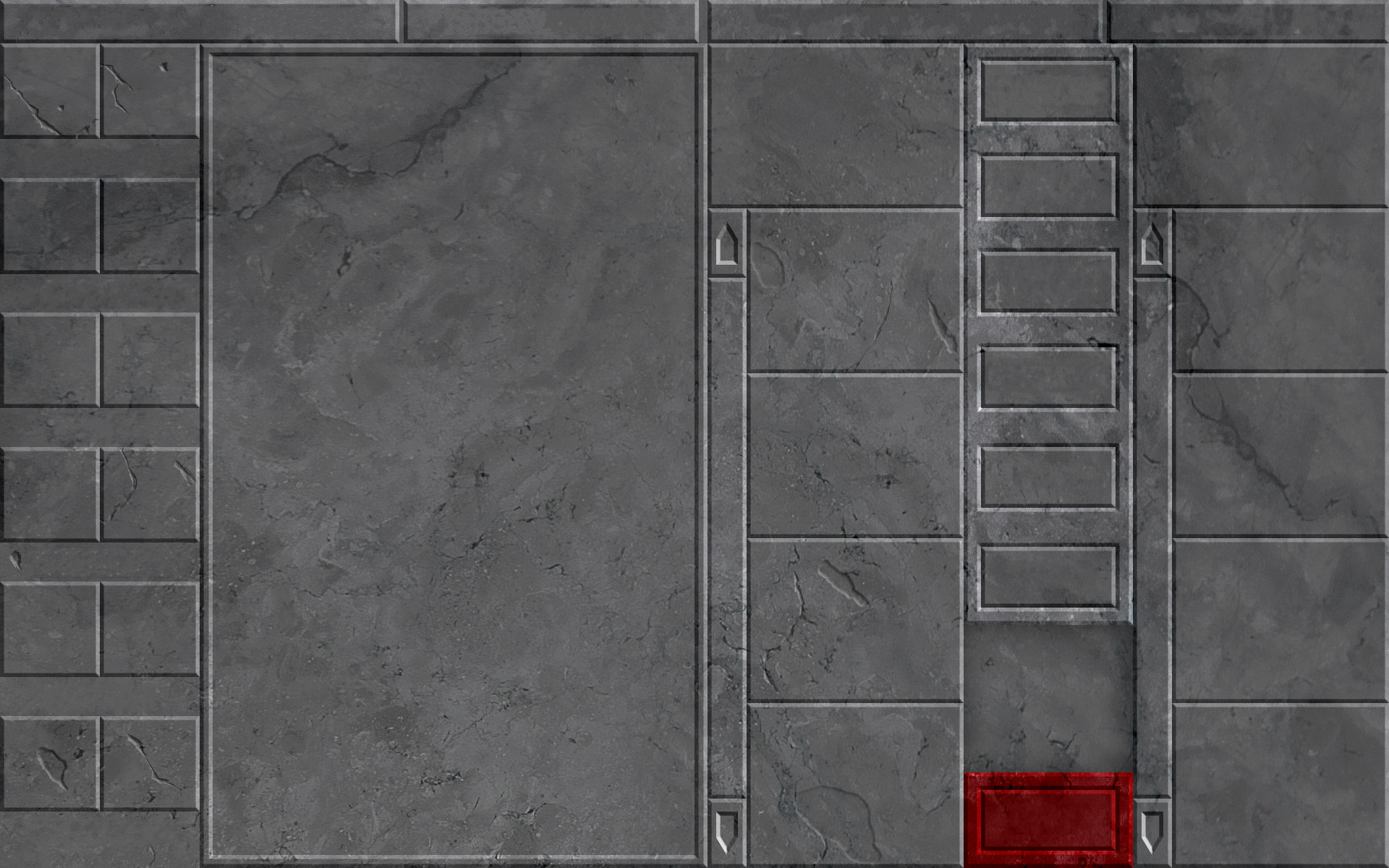 I agreed with King of Worms that I will send him back all the empty images so that that can be used by other translators. Which means that when I will have finished to empty all of them, no other translator will have to empty them again.
In charge of Project French Daggerfall and DaggerfallSetup, dev. of DFTools in English.
French translator for many Warband mods and Bannerlord.
Top

2 - To produce golden text in relief

To add text onto an image is something that can be done too with GIMP. The issue was to find which effects to use to obtain something similar to the actual DREAM texts. After some searches on Internet, I decided, for the titles that exist on some screens, to use the filters linked to the Create Logo function. This function propose a very long list of possible filters and I've chosen a filter named Cool Metal that propose several dozen of gradients, one of them is named Golden. After suppression of useless layers in the resulting logo and adjusting brightness and contrast, it is possible to obtain something like that:

This text on alpha color (transparency) can be copied as a single layer on the aimed image and, logo after logo, it is possible to deposit the translated texts onto the empty menu images.

For standard commands that are in most of the menus, the inventory for example, it will be simple text with shadow, as on the classic Daggerfall menus.

I will create a dedicated subject to describe in a more detailed manner this process for those interested with translation of the menus, but for the present subject we just have to know that a solution to point 2 has been found.
Last edited by Daneel53 on Sat Apr 17, 2021 9:59 am, edited 1 time in total.
In charge of Project French Daggerfall and DaggerfallSetup, dev. of DFTools in English.
French translator for many Warband mods and Bannerlord.
Top

3 - To write texts with the Daggerfont

The font used to write texts in menus is daggerfont.otf. There is no issue for using the Daggerfont with GIMP. Once the font have been installed in Windows (right click on the file daggerfont.otf, install), it is available as any other font and used in GIMP as demonstrated in the above example for point 2.

The issue we face is that the font contain only a very limited set of glyphs usable by non-English language. In the following snapshots we can see the standard English characters that are into the font: 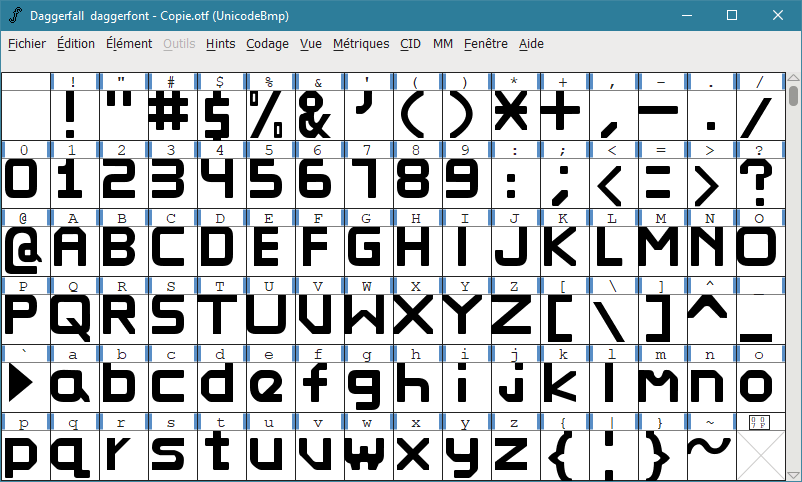 And on this one the existing accentuated characters: 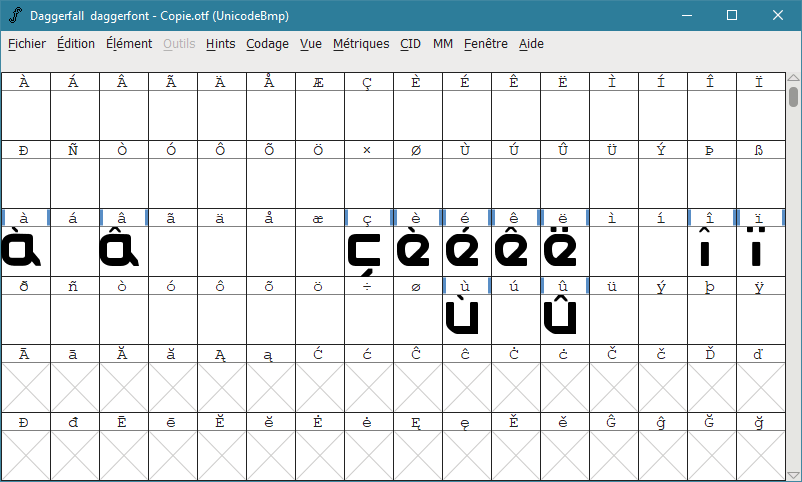 This is very limited, it contains only 11 lowercase accentuated characters used in French, but not even all of them, and no accentuated uppercase character exist when almost all that is to be written into the menus is uppercase. For all the other languages, it is the desert. So the issue that we face here is that if we want to use accentuated letters in the menus, they must be added to the Daggerfont!

This is finally what is the most complicated thing to do because to use a font editor is, here again, a matter of specialists. I decided to use for that another open source free editor named FontForge (fontforge.org). For that I will too open a dedicated subject because to use FontForge is far from simple and the work I'm providing to create the missing French missing glyphs will have to be done by the other translators to produce the letters dedicated to their own language.

I did many trials and errors before been able to produce a first missing accentuated letter as ô and I will share my experience so that you don't fall in the same traps than me and know in a concise manner what is to be done to add new glyphs.
In charge of Project French Daggerfall and DaggerfallSetup, dev. of DFTools in English.
French translator for many Warband mods and Bannerlord.
Top

So, to summarize where we are to obtain HD DREAM menus in another language than English: This subject is there to exchange on that matter and to inform you upon the on-going on my works to obtain fully translated DREAM menus images.

very glad to see this thread. I salute your endeavors a lot! If there is anything I can help with, please let me know.

Just a note on the text/font. In the psd (not png) files Ive sent you, there is this font ready to use. U just find a file where these texts are used and you copy/paste the style over to your text. But thats done in photoshop, not really sure about other progs like gimp. Not even sure u can open the psd file there.
DREAM Nexus https://www.nexusmods.com/users/73250038?tab=user+files
DREAM Forums viewtopic.php?f=27&t=1168
DREAM FACES https://docs.google.com/document/d/1fRI ... sp=sharing

It is possible to open the PSD files with GIMP and the different layers are well separated. But infortunately the text into the layers are not recognized as text elements, so we cannot copy/paste the style of your files. But no matter, most of the texts are simple yellow texts, that's easy to reproduce with GIMP and I even add a small black shadow for the nice touch.

I'm currently writing the tutorial that explain all the parameters to use and the way to do that with GIMP so that other translators don't have to find everything by themselves if, as I was, there are not used to GIMP.

I ment that more detailed style with shading, but I see you can create that on your own in gimp, thats great!

Also, Ive changed that yellow text color to something more appealing (I hope) in the later versions (which were released in a DREAM package) so the final color is more of this shade... just a heads up, pick any color you like ofc 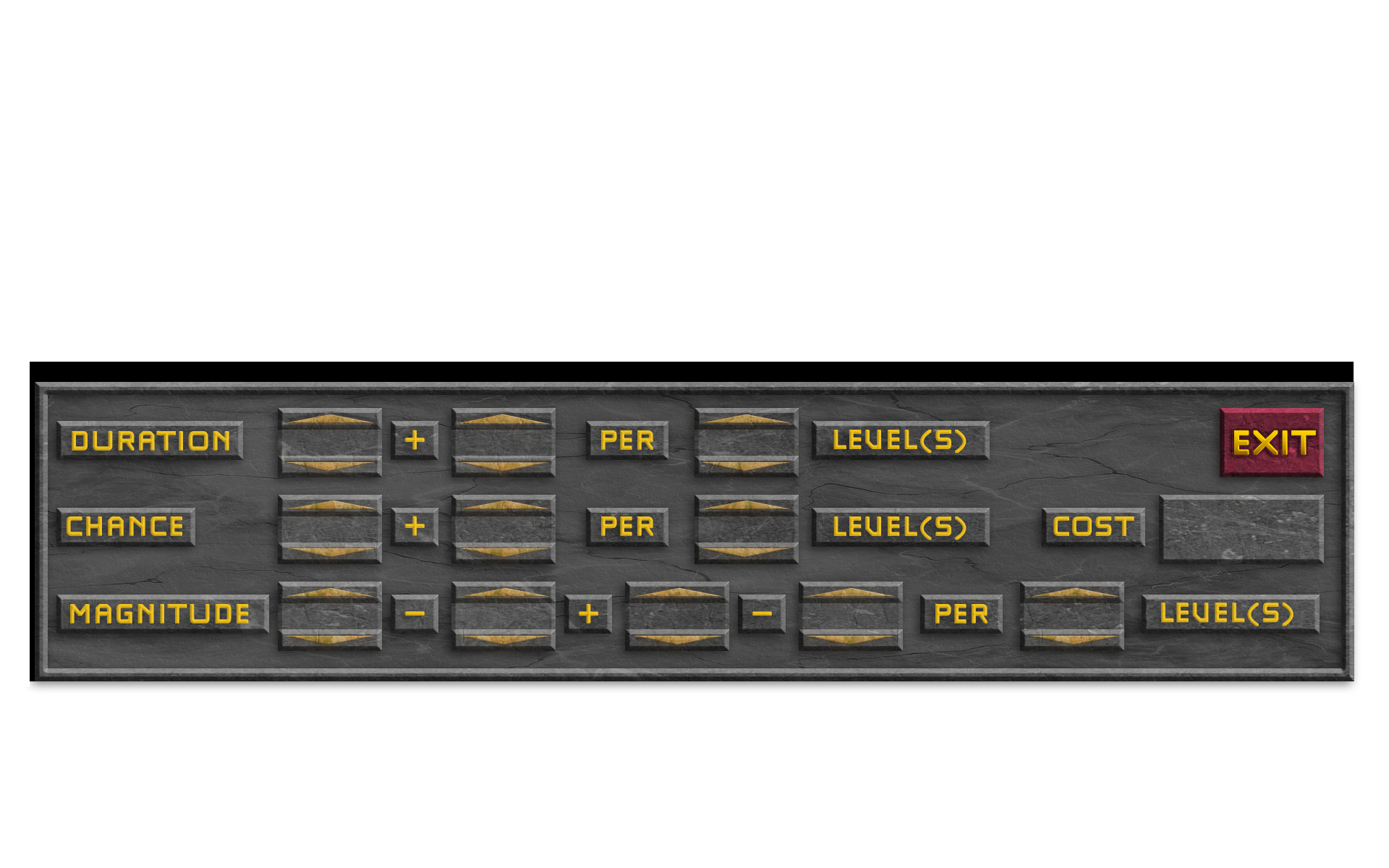 I agree my yellow I probably a little too much... yellow.

I will pick your color and see the result. I will too produce bicolor texts as on your ACCEPT button or GOODBYE, just have to decide the final look and witch filter to use.
In charge of Project French Daggerfall and DaggerfallSetup, dev. of DFTools in English.
French translator for many Warband mods and Bannerlord.
Top

I changed a little my yellow so that it is a little warmer, and here is the first result with all the commands in the inventory:
Spoiler! 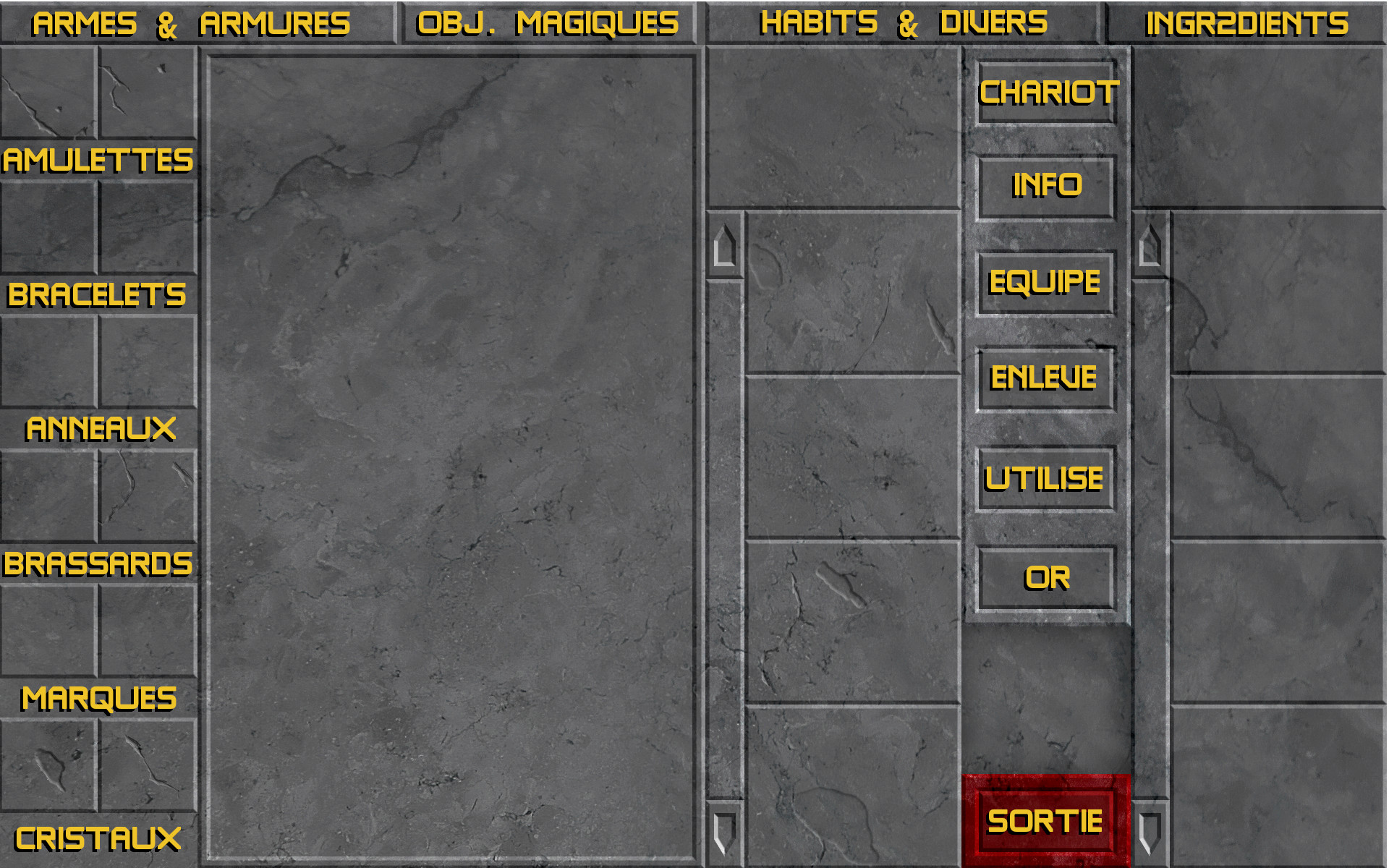 I think this yellow is nearer of what produced King of Worms in his screens. But the screen is not finished.

First, the accentuated letters are not yet into the Daggerfont, and this why I let INGR2DIENTS, to be sure not to forget that some texts must be redone with accentuated letters.
Second, the word CHARIOT does not fit. It has exactly the same texts parameters that permitted long texts as BRASSARDS to fit, but this one does not fit and I will have to change something.

When I look at the original screens of classic Daggerfall, I see that they had the same issue and that they solved it by cheating on some letters. Some words have the letters E or T that are less wide as the standard E and T. This was possible because the letters were pixel drawn, so they just draw them with shorter horizontal bars when needed. Here we use a font and we cannot shorten one letter here and not there, so we will have to find another technique.
In charge of Project French Daggerfall and DaggerfallSetup, dev. of DFTools in English.
French translator for many Warband mods and Bannerlord.
Top
Post Reply
28 posts