I think you just solve it by reducing the text size - either on just that button, or whole column, or all the texts but the top row on the top of the tab... or different word there? There are options and you will find the correct one, Im sure about it

To be honest, I'm thinking to change a little the font itself. Let's look at how it is today:

We can see that some glyphs are clearly wider as most of the others, as those of C, M, O, Q, T, U and Z without real reason. The glyph of O, M, Q is square, those of B, D, P or S are 20% less wide, E, F and L are 40% less wide... All this gives a strange result in the end when we look carefully to the resulting words. Sure, some glyphs as I or L are logically less wide than the O or M, it's the same in all fonts, but I think that the differences are too wide and do not generate a well balanced font.

So I will try to shrink a little the wider glyphs, to generate the resulting .otf font and use it in the inventory screen. Anyway, the next step of my work is to create all the missing accentuated letters, to narrow some glyphs will only be an additional work on the font... provided I can figure out how to do this with FontForge without breaking the glyphs.

All this shall be discussed into another subject and tutorial dedicated to the completion of the font with accentuated letters.

If you can improve the font, than its great. Also the "&" sign looks kind of hideous
DREAM Nexus https://www.nexusmods.com/users/73250038?tab=user+files
DREAM Forums viewtopic.php?f=27&t=1168
DREAM FACES https://docs.google.com/document/d/1fRI ... sp=sharing

I agree, but it is the more difficult to draw...

Maybe I can try to take one in another font, I'll do some trials.
In charge of Project French Daggerfall and DaggerfallSetup, dev. of DFTools in English.
French translator for many Warband mods and Bannerlord.
Top

Daneel, thanks so much for looking into this and especially for providing information how to do it later on. Thanks KoW for providing your HD graphics as well.

I will wait for the tutorial, but on my first impression the current font looks a bit to modern. The font structure does not resemble the feeling I would like to offer to the player. I know that this is up to me later on, but I would try to make it more retro like (haven't looked on serious options. but something more like here or here. On the other side, your font fits quite good to the SDF-Font Interkarma introduced and which is widely used in DFUnity. So probably, I will go the same route with you in the end anyway.

On a personal note: It's generally very hard (for me), if you are used to the Classic Daggerfall font all the years and even did all the pixelated images yourself. Everything which looks different is just as it doesn't fit to the game. It's with the SDF-font and e.g. also with some of the artistic style of your, KoW, Dream-Mod (it's to artifical for my taste - but please, don't read it as a negative critic! It totally suits a lot of other people and your work you put in there is enviable

). Probably I am just used to much on pixelated graphics my whole life. ^^"...

In any case, thanks again both of you. It will be such an amazing feeling to have this all in the game once.

I understand your feeling, DeepFighter, when you have, as me, spend so much time playing Daggerfall with the classic design. This is why the DREAM screens will probably stay distributed only through the DREAM mod.

When the French translation mod shall be finished, I will distribute it with the screens as they are in the PFD, in 320x200 resolution. People that wants to play with the DREAM HD screens in French will have to download the DREAM mod where there will be a separate FR hud&menus mod. Or may be there will be two separate versions of the French Translation mod, one with classic menus and a second one with the DREAM HD screnns. We will see that with King of Worms when the time comes.

This said, I've created the new subject dedicated to the writing of the texts on the empty screens. You will find inside a link toward the related tutorial.

From now, my priority switch from text writing to the completion of the Daggerfont that I absolutely need before to think to write text in French on the empty screens.

I also agree with the sentiment towards the old fonts and pixels. I worked with what I had at the time when I was creating the HD HUD and did what was possible back than.

My favourite font is what I have used in the SpellBook in the latest release of DREAM (and on the dead screen) - but thats hardly usable in the menus.

Maybe I will revisit the texts in the future, but I kind of think I will not... with empty tabs available laters, maybe someone else will do it. Slowly, the new KoW will have to come to replace me, I gave it all already. Somehow I think when DFU 1.0 is released, I release DREAm "final" and detach myself from it... if thats even possible after those years..

P.S. I am moderator in this forum area and play out my power to declare this as not off-topic!

Yesterday evening I've changed the width of some glyphs with FontForge. Roughly, I've a little shrunk the glyphs of T, C, U, O, Q, M, W, X, Y and Z (all the letters that were 5 pixels wide in the classic Daggerfall font), and slightly raise the width of E and L. May be I should raise also the width of F to keep the same size as E.

Nothing that change the spirit of the font, but I think that the set is more regular and the fact that the T, the U and the O for example are thinner allows to have texts that better fit into their place here and there.

If you think that something should be changed, don't hesitate to tell me.
In charge of Project French Daggerfall and DaggerfallSetup, dev. of DFTools in English.
French translator for many Warband mods and Bannerlord.
Top

After many days of work, the new font Daggerfall2 with all missing accented characters is out. Some of the existing signs have been changed too, which includes the hideous &. It is still not tasty, but a little better than before.

This done, I have remade all the texts of the inventory screen with the new font. Here is the result: 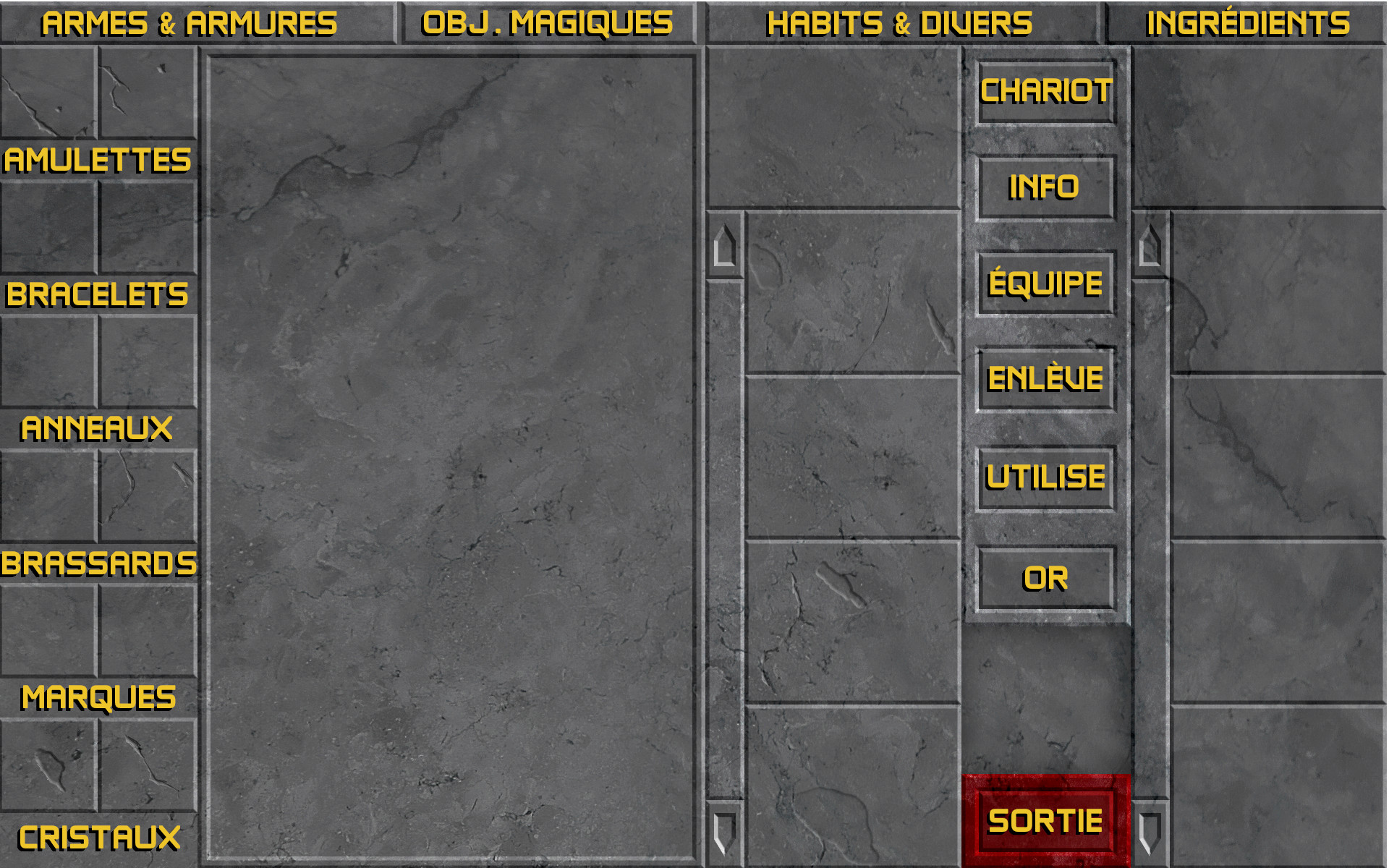 Once the second type of colored letters with relief shall be created, it will be time to begin to translate all the menu screens in French.

In charge of Project French Daggerfall and DaggerfallSetup, dev. of DFTools in English.
French translator for many Warband mods and Bannerlord.
Top
Post Reply
32 posts