I had another hell of a week, but progress continues to be made, thanks to Gudadantza the quests are still being translated. With some luck, next week I may be able to continue the translation. 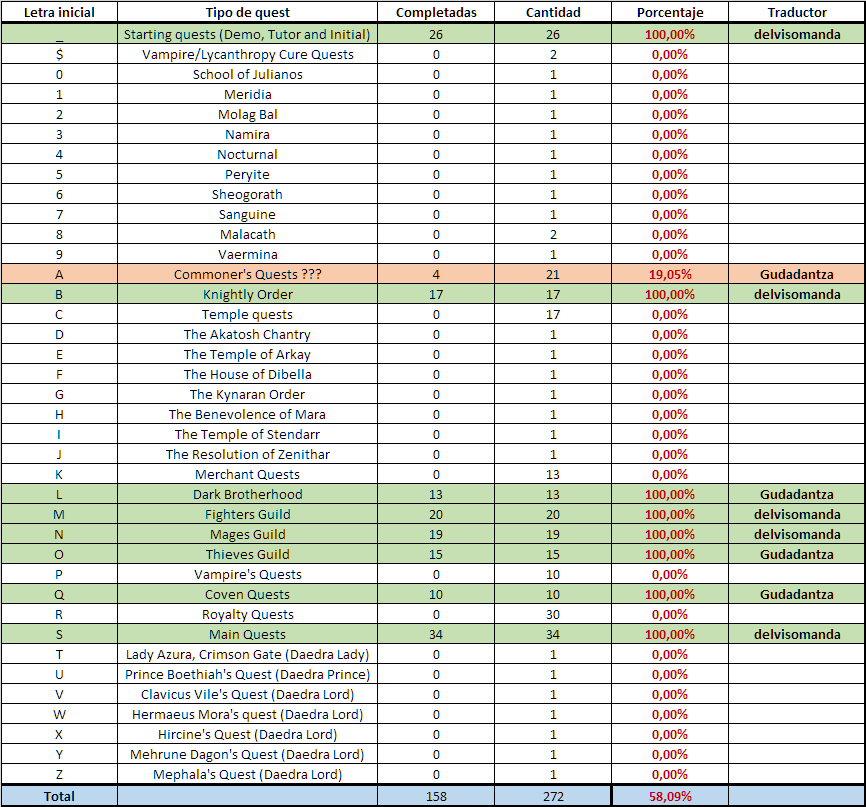 Reminder for interested people, if you want to help with the translation, just send me a private message.

by Gudadantza
Hi all, I write this just to say that the lack of updates in the spanish translation are only visual, it is due to some real life issues from delvisomanda. For now he is unable to maintain the translation because he nowadays lacks internet in the place where he lives and is only able to connect from time to time. Maybe in a future he will continue.

Meanwhile I am slowly advancing the translation in my spare time and it will be in that way for now.

For now I can say that the commoners quests are complete and the daedra quests are almost complete. So the update is that around 26 more quests are translated since last update.
I hope It will be slow but continous.

by Interkarma
Awesome work you guys! I really respect the power of sticking to something.

I am following Daggerfall from Unity from a long long time. (Hell, since DaggerXL, a pity that project stopped!) So I really love the work is done here. I am Huge fan of Daggerfall, that's for sure!

Anyway, I want to post here, because I was the one who made that old half-broken Daggerfall translation. So I am very happy there is a team to translate Daggerfall Unity. And... well, I am here because I really want to help a little bit. Not that I have much sprate time, but anyway, if I can, I will be more than happy to give a hand.

by Gudadantza
Hi Nightwolf, In the last weeks I was unable to push forward the translation more than I liked but It is relatively advanced.
This is what is been done so far apart the delvisomanda work noted in his posts:

If I am not wrong It lasts around 65 quests untranslated

So, not very far for completion.
Later I will send you a private message.

by Nightwolf
Many thanks! I saw your PM. But for some reason, I am unable to send a PM to reply to you. I dont have access to the second link you send to me.

In order to edit the quest, just open them as .txt files and that's it, right? Or there is any other better tool to do it?

by Gudadantza
Yes, The archives can be opened with a simple text editor. I Ignore what the differences are between translating original Daggerfall quest archives and Unity version but I guess that when you see them probably will be familiar to you.

If you send me your email I can give you permissions in the dropbox folderforthe translation. But I can not find the email name.

by Gudadantza
And one thing about the books.
I never gave it importance because the books in daggerfall are officially translated in later titles but the format is another thing, It could be harder than expected and probably could be safe waiting until the project is finished. Probably should have been safer as well waiting later for the translation because it is possible that some quest (Not the translatable parts but the scripts) can be fixed of changed and the translated text should be copied and pasted in a new txt version, with the boring work that it involves, but sincerely I do not know and job done ahead is a good thing.

If anyone knows anything about it please summon yourself.

by Hazelnut
If you forked the DFU repo and edited the quest files you should be able to merge quest fixes using git, just a thought...

by Gudadantza
It can be an amazing idea if needed.
In any case it could be the safest way of things when the translation is finished. But for now I have no idea how repos or these things work though. Maybe I have to learn something in a future...

Greetings
All times are UTC
Page 5 of 7