A curated forum for compatible and maintained mods. Users are unable to create new topics in this forum but can reply to existing topics. Please message a moderator to have your mod moved into this forum area.
Post Reply
153 posts

one question about resolution scaling.


1024pixels across is more than enough for the compass size as is. Higher resolution can only do as much on an image glued to your screen, especially if they're then downsized to fit it. As long as the image doesn't look blurry/pixelated it's good!

The render layer png is capped at 700X700. Wouldn't this mean, if I fullscreened minimap and put the render layer over 700X700, wouldn't it pixelate the camera render layer texture that is being piped to the canvas screens render layer. The render layer on a a 1980 by 1080 screen with the minimap full screened could go above 700 by 100 to 200 pixels, which would add pixelation right? Or do I not understand how the resolutions are converted on rendering in game?
My Daggerfall Mod Github: l3lessed DFU Mod Github

I figured this out.

Never doing this before, I was doing this completely backwards. I was modifying the rect transform sizes on the fly and setting the scales as a permanent property that doesn't change. That led me to needing the super hi res images to make it not pixelate when it tried to scale the shrunk canvas scaler resolutions.

So, the solution is to make sure the canvas scaler delta size is set to the texture size, and then from there, use the rect transform scale to rescale it to the sizes you want.

This led to exactly what you said. Now, when the minimap sizes itself, it merely is scales down and up from the base 1024X1024 texture size to produce the even better looking textures with far less space required.

Thanks for this. It really fixed the bloat issue I created and allowed me to understand how to setup the UI properly so it is optimized for 1024 textures.

I'll push out the optimized version. It will also include a fix so all houses for sale show up in the minimap, including the rotation random ones that change very month.

I did up the render texture and compass textures to 1024 from the base 700 so it would all line up with the majority of textures that are set to 1024 already. I'll push them to the github, so you can have the new ones when I push the update.
My Daggerfall Mod Github: l3lessed DFU Mod Github

Great job, happy to hear that and Im looking forward the new version. I will try to fine-tune the textures afterwards, when I can hopefully easily inject them as a loose files and see the changes Im making translate ingame

Theres a room for some relatively easy improvements of few details here and there
DREAM Nexus https://www.nexusmods.com/users/73250038?tab=user+files
DREAM Forums viewtopic.php?f=27&t=1168

With the assist of King of Worms, the canvas objects have been completely rebuilt to properly optimize texture use. This speeds up load time for everything, especially when loading a new game. However, this also helps when loading new cities, since the render texture is a optimized and scaled size.

Also, check the mod settings. There is now an option for the compass to be an equippable item. When you start the game, it will give you one automatically as of now.

Under the settings are also a ton of effect options to control each individual effect in some way. 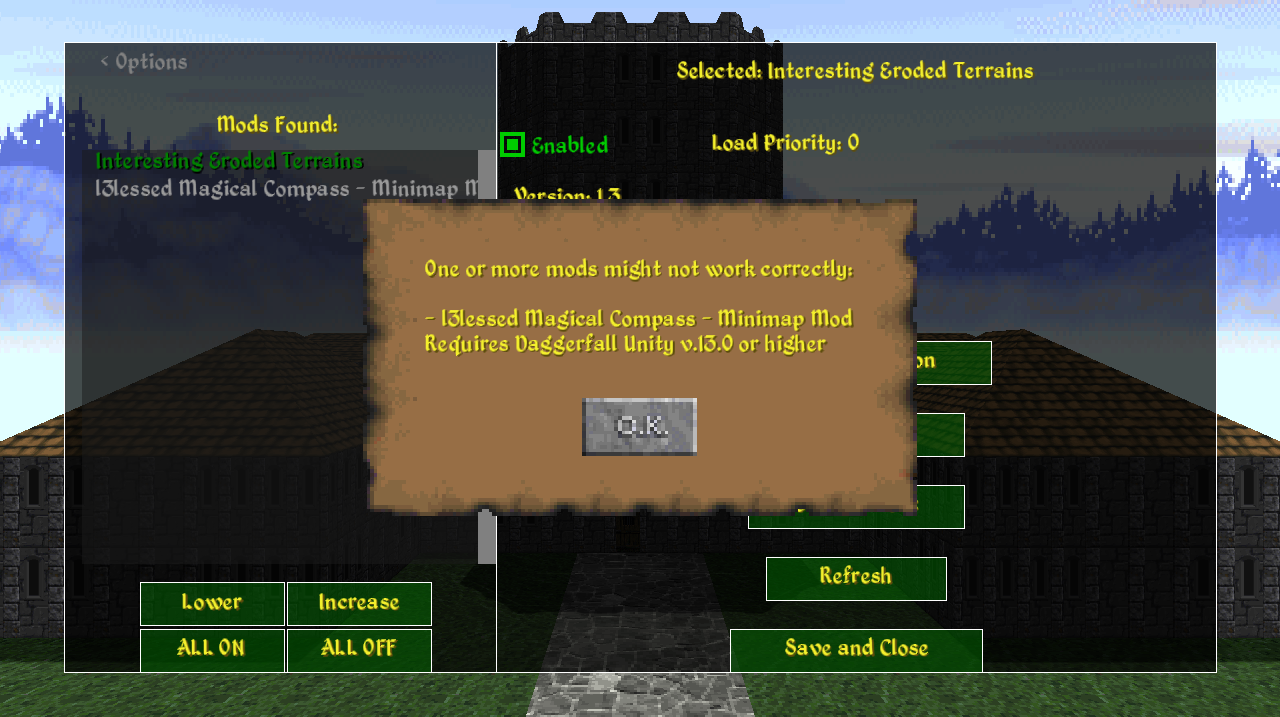 And this is what the compass looks like for me: 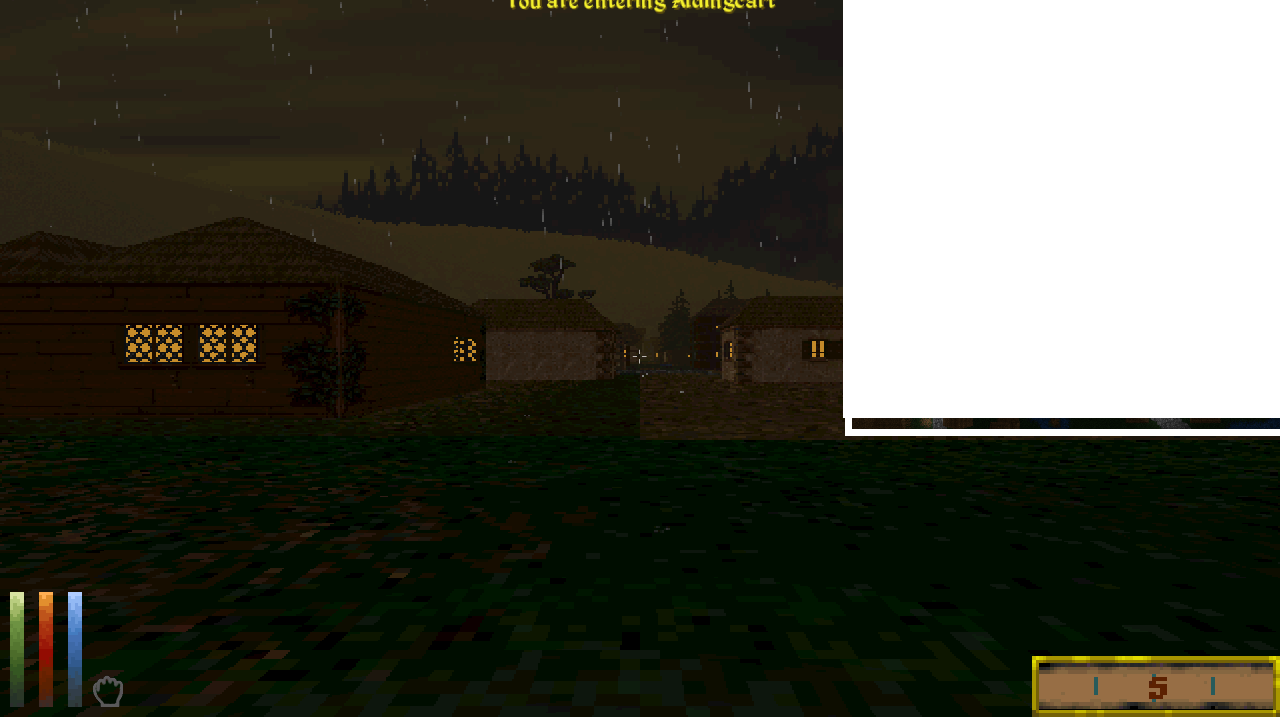 Let me make sure I didn't grab the wrong build file.

Sorry, it seemed I borked all of them on the last build. With how many things this mod requires to build properly into a dll precompile, it can go wrong quickly.

Anyways, I rebuilt it and tested it on stand alone 12.0 windows build, and it loaded just fine for me. Try again with the new compiled build for linux.

I'll be tweaking the effects some more. I updated them to try and improve their realism, but now they are to fast on their dripping, especially blood effects.
My Daggerfall Mod Github: l3lessed DFU Mod Github

Thanks for this mod. There's several problems though.

The reason why the textures don't load on linux is because of incorrect texture path, they're case sensitive on linux, the textures are in "minimap" folder while in the code it looks up "Minimap."

There's another problem with dungeon collisions: it seems all collisions are duplicated and stay on their original places, like an elevator or a gate. When you activate either of these the actual collision of the object moves but also another one stays in place, so it's not possible to use elevators and gates.

Also since there's no setting saving it would be nice to downscale the compass a bit, on 16:9 (2560x1440) it is gigantic, taking nearly 1/3 of the screen and overlaps weapons.

And as shown above, the required version string is not formatted correctly (in the nexus version at least) so dfu complains about it even though it's > 0.13
Top

Thanks for all the reporting. I realized after I moved it here, I probably should of waiting a little longer for that and the nexus release. Oh well.

I did allot of bug tracking down and smashing, the biggest one being tons of errors cropping up when trying to load old saves with older versions of the mod. I could of been mean and said the saves are fubared and load new games/saves, but I dug into it and found the exact problem and created the solution, so now this is completely backwards compatibly with previous versions.

I've fixed the save issue not storing settings. This was a result of me trying to fix null errors when loading previous saves with older versions of the mod. The save was loading enums and dictionaries that no longer existed in the updated mod versions, and I found that just today. So, I built in a checker to ensure any dictionaries containing out of date enums will be checked and then repopulated with default new settings. This should only happen if you are loading a old save with corrupt dictionaries and enums.

I'll fix the texture path capilization. That is easy.

I'll check the dungeons collision, but there is no reason this should affect the base dungion collisions as I understand it. However, I need to see if the enabled minimap rmb blocks keep their collisions, and if they do, this could be the issue. The minimap was not ever intended to be running while the player was playing in first person, and as a result, this could be the issue at hand.

The version issue is really just an annoyance that can be ignore. This should work with older and newer versions. I'll back date the version requirement though to stop the message popup.
My Daggerfall Mod Github: l3lessed DFU Mod Github