King of Worms wrote: ↑Sat Sep 26, 2020 4:04 pm Damn, its scary how its all connected, I made ONE change to the material... its the floor of the dungeon walk-thru. Used to be wooden, but I liked the idea of making it dirt, because it worked nicely and connected different floor materials in between the dungeon blocks nicely. And OFC its used in a inns as a random object

There are like 10 wood surfaces to choose from, and they used this one...

Im really not sure now. I dont really want to change it back to wood

Thanks for letting me know, I will meditate (sleep) on that

EDIT: Is it used in a base game, or its a object you placed? If its the 2nd option, might it be possible to use some other wooden surface, if there is any to choose from?
Spoiler!
Dung (39).jpg
Dung (17).jpg

As far as I know this object it not used in the base game. But there are plenty of objects that I added that I used to believe didn't exist and later found or got told that there are there. But when an object doesn't exist in the base game, it feels nice to basically "restore" some "cut content".

There are other wooden objects that I could use instead, however, this model works very well in creating small wooden surfaces, such as a stage for entertainers to perform on inside the inns, and looks really nice. Using other wooden objects wouldn't quite give the same result. But the biggest issue is that there is some extra work involved in designing locations to make sure that they play nice with various combinations of mods, and fixing this would alleviate some extra work for me and future creators, and would be appreciated.

Got it, have u seen the images I posted? The part you use is a floor of the dungeon walk-thru... so even if I make it wooden, it will look dirty and rugged, just like the walls and ceiling of this walk-thru. Im extremely torn on this one.
DREAM Nexus https://www.nexusmods.com/users/73250038?tab=user+files
DREAM Forums viewtopic.php?f=27&t=1168
DREAM FACES https://docs.google.com/document/d/1fRI ... sp=sharing

I saw the images you posted and I do understand your reasoning. The orignal texture is quite dark, dirty and rugged so I would expect any replacement to be that as well.

Potentially you could replace the models of these dungeon parts to use the texture that you want while keeping the original texture as is. Would require some work of course, but could be done.
Top

Well that would be really good solution, to change the models instead of the textures. I guess the person to ask about it is AlexanderSig, he makes the 3d models. Ill try to solve the issue somehow, I like your Mod and Id like it to work properly with mine. Another issue is Im incredibly burned out with my mod... I started it because I loved creating art for this game, and it progressed to something where its maybe 5% art and 95% of some technical aspects solving I never really wanted to deal with

The female faces are misaligned relative to the helmets. Specific faces are really bad, but all are a ways off. 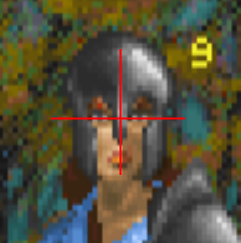 Classic Daggerfall. Note you can see her eyebrows past the helm.

(Also note the scaling issues. Classic Daggerfall rendered the paperdoll to be thinner. Not sure that's an issue your mod should tackle, or if it should be tackled in the paperdoll rendering engine. Would look better in the long run to render properly to begin with rather than scaling in the UI, but it doesn't really matter without much higher detail levels.)

The standard faces. You can barely see her eyes under the helm, which is acceptable, but not ideal.

The high res faces. Her eyes are completely hidden under the helm, and her face is offset to the left a ways.

I didn't go through every single face in the game, but as far as I can tell, the issue is as follows:
Here, "HD" refers to the seemingly hand-drawn faces, as opposed to what appears to be AI-generated faces. Before tweaking faces left and right, it would make sense to tweak all the helmets, since those are off by a pixel or three relative to each other. Then go through and tweak all the faces left and right, since they're only off by a few pixels.

Originally, I found the Wood Elf faces way too high. But looking at them now (having upgraded from 0.10.24 to 0.10.26a in the process), they seem to be fine (as fine as any other heads; they're still a little too high). I've gone through all the Wood Elves by face index, and gotten this (a "tad" is a smaller error than a "bit", carefully eyeballed with the highly-calibrated pixel-detection system on my meatface): Bretons: Redguards Nords
Top

Hi thanks for a detailed report. Its not about the face placement but the helm placement Id say....

Im somewhat aware that the helmets got misalingned somehow.

I spend quite some time aligning the helmets, so Its not very clear to me, what happened :X It was something in the patches of the game.

I thought only the weapons will get effed up, because the patch after the latest release of DREAM introduced the gender-specific tuning of weapons. This was a good thing and it happened because Ive found the gender specific alignment was a thing in a base Daggerfall and it was missing in DFU. So this improved the paperdoll for everyone, even the non-modded version users.

This will need some work. And it will be exactly the kind of work Im completely fed up with. Tweaking some numbers in a 100s of xml files. I might try copy-paste of the Male helmets XML and see what happens.

Anyone up to this task? Because I cant take it anymore.

Its all done for males. It just needs to retry the process for females.
Once you understand it, its a thing for I guess a day.
Thing is, getting to understand it and creating a workflow takes a moment.

EDIT: Checked and all the helmets have XML files already but the archive 251... this confirms my memory that I set up the helmets already for all genders and races, so this somehow seems like a game regression?
Last edited by King of Worms on Wed Sep 30, 2020 2:09 pm, edited 2 times in total.
DREAM Nexus https://www.nexusmods.com/users/73250038?tab=user+files
DREAM Forums viewtopic.php?f=27&t=1168
DREAM FACES https://docs.google.com/document/d/1fRI ... sp=sharing

Good to hear!
That goes to show that engine upgrade can break things in subtle ways... A lot more than what meets the eye at first
When a measure becomes a target, it ceases to be a good measure.
-- Charles Goodhart
Top

Fosley, what version of the game are you using? Was this happening in the previous versions as well for you?

Ive Checked and all the helmets have XML files already but the archive 251... this confirms my memory that I set up the helmets already for all genders and races, so this somehow seems like a game regression?

More importantly: can you please send me a saves with the characters having a issues, that would be the best help.
Start with those which are really bad.

I'm not sure if this is a DREAM of VIO thing... I'm reporting it in both threads so both are aware, as it only seems to happen when both mods are enabled. It's probably some interaction with them with some part of the new update though.

The guards in cities glitch and sometimes render as a collage of individual animation frames. This only happens when both VIO and DREAM and enabled together on 0.10.26.

Here's a still and a video.

A video showing the guard walking through the streets. The video may only be available for 2 weeks: http://www.mediafire.com/file/cuv3fnc3xj1ib62