A curated forum for compatible and maintained mods. Users are unable to create new topics in this forum but can reply to existing topics. Please message a moderator to have your mod moved into this forum area.
Post Reply
161 posts

I think the feathering might do the job indeed, I might try it on few sprites to test it.

And you are right, the outlines of XBR might be better, but it creates that huge cascade effect in cartain angles if we upscale from a very low resolution. Exactly as you describe it. Every method has its pros and cons in certain areas. But your mobs now look superior indeed, just that outline sometimes looks too jagged (but its much better now with 8x)

Thanks for the corpses! My corpses do not fit the PVE mobs, different style. My style looks more handdrawn and your is more leaning towards a photo-realistic style.

I absolutely understand your plan to take a break

You did a outstanding work here!!!!

Anyway, its a step up, looks great!! Some mobs I will handtouch and when a reasonable batch is completed, I share back to you. (Things like skeletons head, its not too round etc)

Screen download: (I added closeup to one of my NPCs to see the outline as well) Its PNG so 8mb archive.
https://ufile.io/dx6pklyr

PSS: Did some tests on VRAM usage and its the same in between our mods, which is a good thing IMO, because yours are more detailed and the DFMOD package is cca 30% bigger than mine

RAM usage was nearly 1gb higher with your mobs, but I did not test that properly (no PC restart beween the tests) so it might be a mistake. Will test more laters.

Yeah, I see what you mean about the jaggedness. It seems to me that xBR avoids the aliasing problems by mostly allowing only straight horizontal and 45 degree diagonal lines. Basically, it avoids angles where aliasing would become apparent.

Give MrFlibble's two-pass xBR/xBRZ method a try. It looked like it reduced a bit of the cascading effects of the single xBRZ pass alone.

I went back and double checked, but they are actually 8x resolution already. Those frames just started off SO TINY! 401_0-0 was only 64x29! Starting from that low of resolution, I doubt that upscaling it another 2x will do anything but make a big blur...
Top

Ok, to end all speculations.. I made this test and its results speak for itself.
Two circles, one made with antialiasing, other without. According to common belief, they should appear the same, but indeed they do not.
The left one displays exactly the same behavior like your sprite edges, right one looks like mine.

ok... will have to work with what we have!
Thank you!! 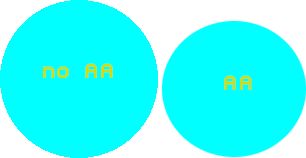 I made this test and its results speak for itself.

The results really do speak for themselves! Anti-aliasing is the way to go! I've tried using GIMP's antialiasing filter, but it doesn't look like it's doing anything to the edges. I may have to do some studying on it.


I used two pass XBR for my sprites.

When you did your xBR upscales, you did two up-passes (xBRZ 4x) to get the 16x resolution, then down scale with bi-cubic interpolation to get to the final 8x, right? Seems like I remember reading that at some point. Did you manually do any anti-aliasing after that point or do you think the softness comes from the bi-cubic downscaling?

I may try to do some testing tonight to see if upscaling then downscaling will give me these same results on the edges.
Top

do you think the softness comes from the bi-cubic downscaling?

Thats exactly the case! It saved me a major headache!!!

you did two up-passes (xBRZ 4x) to get the 16x resolution, then down scale with bi-cubic interpolation to get to the final 8x

A bit unorthodox approach but it payed off at the end of the day.

I may try to do some testing tonight to see if upscaling then downscaling will give me these same results on the edges.
Just be carefull that this might compromise the details of the images. But indeed its worth a try. Maybe try comparing this approach with just reducing the resolution by 10 or even just 5 or less %... That should do the trick as well.
BUT - the dimensions of X and Y size of the images MUST still be able to be divided by 4 after the resize - so the images can be compressed by Unity.

I used standard, it creates a smooth outline, but it was not a good idea (it created a dark outline at many places, but I manually worked the outlines anyway, so it turned out to be no problem afterall) With all I know NOW, Id used no-blend and the smoothness would be created by the downscaling with bi-cubic. Because ingame, with bi/trilinear filtering, the results of smooth vs noblend textures are identical visually.
DREAM Nexus https://www.nexusmods.com/users/73250038?tab=user+files
DREAM Forums viewtopic.php?f=27&t=1168
DREAM FACES https://docs.google.com/document/d/1fRI ... sp=sharing

Btw I have a idea. As we have noticed, the werewolf and wereboar models are almost identical. Very minor details separate these two.

I can try to switch the pallete on the vanilla sprites using SLADE editor.

Im sure I will need to do each image manually, so if u happen to know how to batch process this change (shades of brown to shades of black) pls let me know.

Which one should be dark?
Boar or wolf?

And is it so bright idea as I think or its nonsense?
DREAM Nexus https://www.nexusmods.com/users/73250038?tab=user+files
DREAM Forums viewtopic.php?f=27&t=1168
DREAM FACES https://docs.google.com/document/d/1fRI ... sp=sharing

Luckily, it's the disk that pretty much only has the OS and a few games on it; nothing irreplaceable, but I will be out of commission until I get a replacement. (I'm writing this from my work PC)


Btw I have a idea. As we have noticed, the werewolf and wereboar models are almost identical. Very minor details separate these two.

I think that's a great idea!


Which one should be dark?
Boar or wolf?


Im sure I will need to do each image manually, so if u happen to know how to batch process this change (shades of brown to shades of black) pls let me know.

I know that MrFlibble has done some palette work in MPaint, but I'm not sure what kind of batching capabilities it has...

ImageMagick or G'Mic may be able to handle the task, but I don't have much experience with them.

GIMP also has some palette swapping capabilities, but I never messed with it much.
Top

Good luck getting your pc up and running. Get some ssd fot the system and most used progs/games.

Agreed that boar should be the darker one. And changing the height/width might be interresting as well !

Btw MasonFace, Ive worked on the corpses quite extensively, and Im ready to send the results to you if you interested.
They are not perfect, but much much better than before. I tryed to match them to the actual living mobs colors.

And yes, they were - sometimes completely off - for example the dead frost elemental was 90% black, while the mob is 90% blue

Bear is yellowish and the corpse was dark brown
And basically all corpses had wrong colors, brightness etc
Some were missing blood beneath them for no reason.
Plus I made the corpses cast slight shadows/reflection on the blood beneath them, so it blends together and looks more real.
And made the Topaz AI pass on them as well.
Plus possibly more things.

Now I need to match the actual SIZE of the corpse to the mob. Again, in many cases, its completely off...

I worked on them as well.
1st I corrected MANY cases where the mob had holes in it for no reason. I think the masking generator sometimes mistakes the black canvas with a black parts inside a mob and cuts a hole there. So I filled SOME of them up, but only those which should be dark! Some holes are correct, and I left those untouched.

Than there is lots of cleaning, cutting off some dark borders and anomalies which only obfuscate the model and are a result of upscale from a low res sources. Things like those dark parts around pouches, sometimes between the legs etc. Again, I do this from a artistic angle, so I dont remove ALL black automatically, only where it is actually beneficial!

Than I replaced some faces on the MOBS. Some frames had good face, and some was very distorted or malformed, so I corrected those (example was a harpy, nymph, skeletons skull was cut off in some frames)

I switched your feiry dragon (289) with mine. Yours has some strange head with too much black, it has better wings but those move so fast u dont see them that well. Overally, my mob feels better in this case.

I can send you the mobs as well.

In case you would consider adding the soft outlines, or anything, it would be a better base than the raw upscales Ive received. 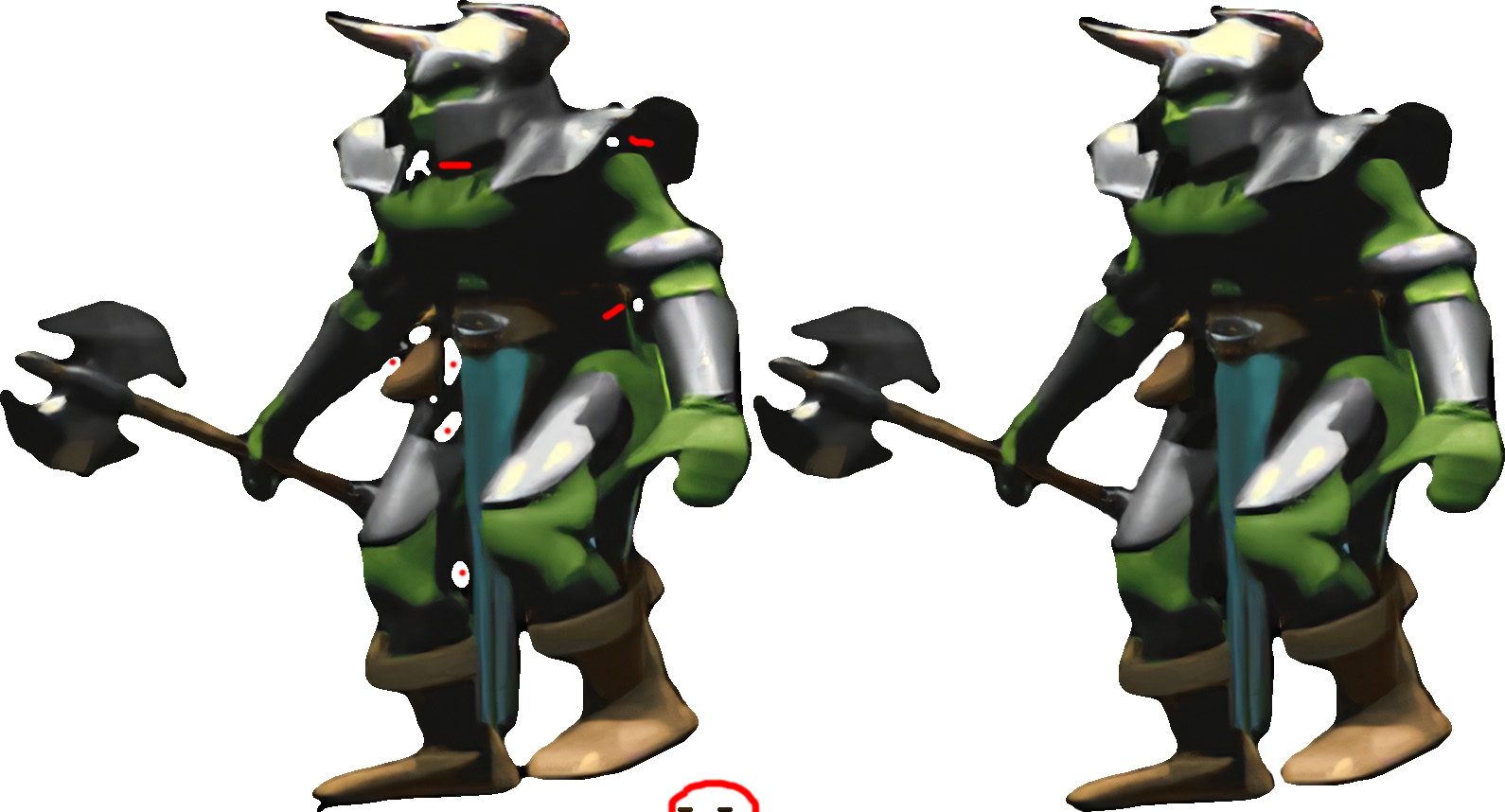 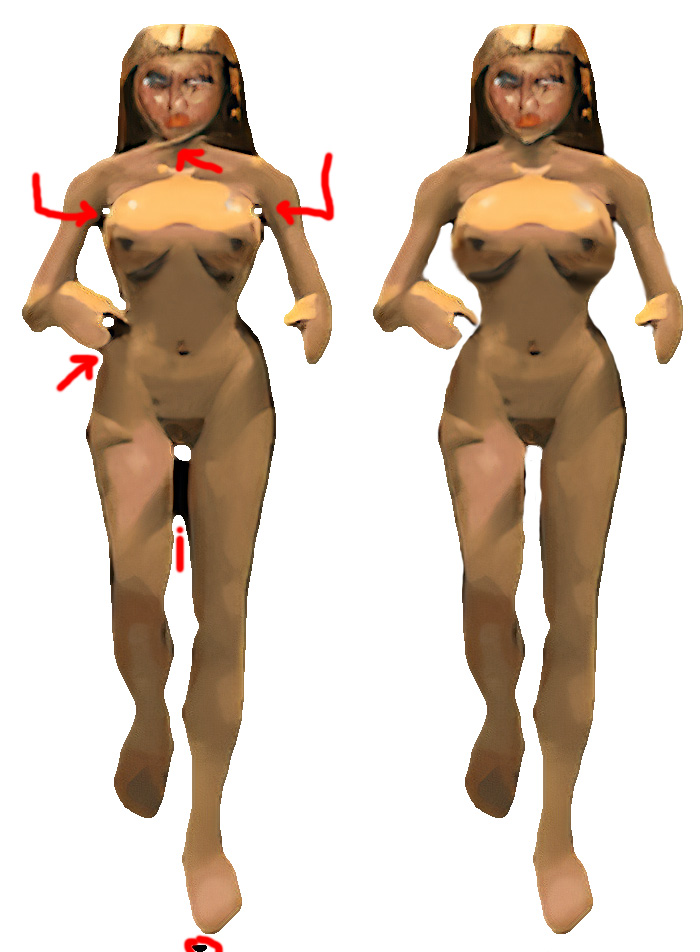 Excellent work! I would very much like to have those MOBs and corpses for PVE! This is precisely what my vision of PVE was: a first pass using AI upscaling, and a second pass with skillful artistic touch-ups.

I'm still taking a bit of a hiatus from DFU to work on some other personal projects, so if you want to hold on to them for a few weeks to continue to refine them that would work out fine for me.

BTW, have you had a chance to work on emission maps for the MOBs that need them? And did you end up modifying the wereboar? If not, I can help with that when I start back working on upscales.

Speaking of which, I still haven't gotten ESRGAN and SFTGAN back up and running since I formatted my C: drive... I must be installing the dependencies wrong somehow. I may need to uninstall all the dependencies and start over from the beginning to make sure I'm doing it all right...
Top
Post Reply
161 posts