A curated forum for compatible and maintained mods. Users are unable to create new topics in this forum but can reply to existing topics. Please message a moderator to have your mod moved into this forum area.
Post Reply
15 posts 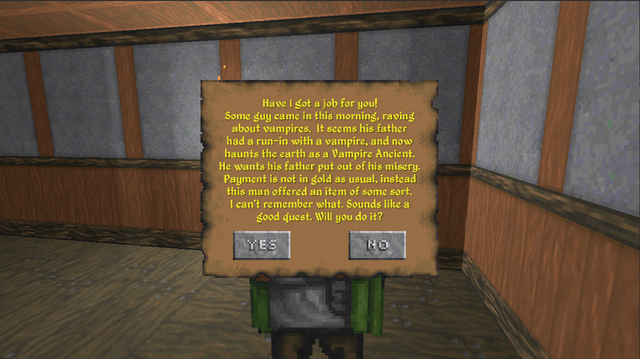 What is the Forgotten Quest Pack?

The UESP has held on to several old quest packs that were written for classic Daggerfall. User Hermän2000 converted them to DFU's format, and I edited them with some basic bug fixes.

The included quest packs are:

We have no apparent means of communicating with the original quest pack authors. I sent an e-mail to Skeleton Man using the e-mail address included in the Xtra QP information but have received no answer. Until the permission of each mod author is obtained, this quest pack cannot be uploaded to Nexusmods. I'm holding it on Google Drive in the meantime.

Extract the included "QuestPacks" folder to the StreamingAssets folder of your DFU install so it merges with the existing QuestPacks folder.

Many of these quests have high reputation requirements, so prepare accordingly. A readme is included for each of the component quest packs so you can preview what each one contains.

Any information about bugs you find while testing are greatly appreciated, of any kind whatsoever.
Top

Thanks for your work and sharing, lets hope the quest authors give you a green light

Thank you Hermän2000 and Jay for the work you have put into converting. I really like if classic stuff can be re-used in DFUnity. There can't be enough quests for Daggerfall!

Downloaded! I'll let you know if I see anything!
Top

I have tested each quest in The Forgotten QP, and have completed them all. It took only a few bug fixes -- a testament to DFU's interpretation of the quest language. Download the newest version if you have an old one.

I contacted what may be the authors of the quest packs on Nexusmods, if the profiles are accurate. No answer yet. In the meantime I'm considering this mod "released," open to more bug reports. The whole thing should be stable -- though I have no guarantee that it's balanced.

so it's called "The Forgotten" because they really were forgotten!

Nah, I just wanted a mythical-sounding name. Interkarma excluded these from DFU, but not out of forgetfulness. "The Forgotten Quests" was just a good-sounding name, like a treasure we're unearthing and opening to the world again.
Top

Sorry I'm a little bit confused. Is this the same content as in this Nexus mod (Daggerfall Unity Quest Pack 1): https://www.nexusmods.com/daggerfallunity/mods/2 ?
Top

No. It uses five quest packs from the classic Daggerfall add-ons: https://en.uesp.net/wiki/Daggerfall:Fil ... al_Add-Ons. You may recognize some of the names from DaggerfallSetup, since it tries to install them to Daggerfall classic.

Jay_H
What if I enabled all options during install of DaggerfallSetup? This questpack is already there or your version acts as an override to it?
Top
Post Reply
15 posts