Bug topics that have been resolved.
Locked
27 posts

Crazy stuff, good catch!
When a measure becomes a target, it ceases to be a good measure.
-- Charles Goodhart
Top

TheLacus wrote: ↑
Mon Sep 02, 2019 11:35 am
Glad the cause was found. If you are still confident there is an issue with classic animation, i can change title of this topic (unless you prefer to make a new one) so someone more involved with weapons can give a look.

well this is a core issue, Im now 99% certain this is a vanilla bug. It happens with the un-modded game.

I will change the title tho. Not sure what more can I do. Thanks for help!
Top

I hope this can be dealt with
btw, I found this bug using your save where u have this red axe (old witches coven bug report)
Can you please confirm it happens on you pc as well, when using vanilla weapons?

Just test the attacks. Mouse to left, mouse to right, etc... the weapon just doesn follow these commands on my PC

King of Worms wrote: ↑
Mon Sep 02, 2019 1:25 pm
btw, I found this bug using your save where u have this red axe (old witches coven bug report)
Can you please confirm it happens on you pc as well, when using vanilla weapons?

Just test the attacks. Mouse to left, mouse to right, etc... the weapon just doesn follow these commands on my PC

Ah! Probably the Daedric Unrestrainable Battle Axe then: Other movements (stabbing, etc.) look okay.
It's hard to be 100% sure of the mouse movements, but I equipped an axe in each hand, one enchanted the other not, so I can quickly switch and test movements...
So yeah, the enchanted axe movements look mixed in classic

I reattached the save if anyone else wants to experiment

Thank you, thats exactly the wrong numbered attacks..
I think this should be repaired in the core, we dont want old bugs transfering to DFU.

And the remedy is quite easy..

Good work figuring that out.

For another example, here are the axe animations in Daggerfall Imaging. It's very clear the animations are flipped when you see them side-by-side (examine the middle few rows of of frames where it's most obvious) 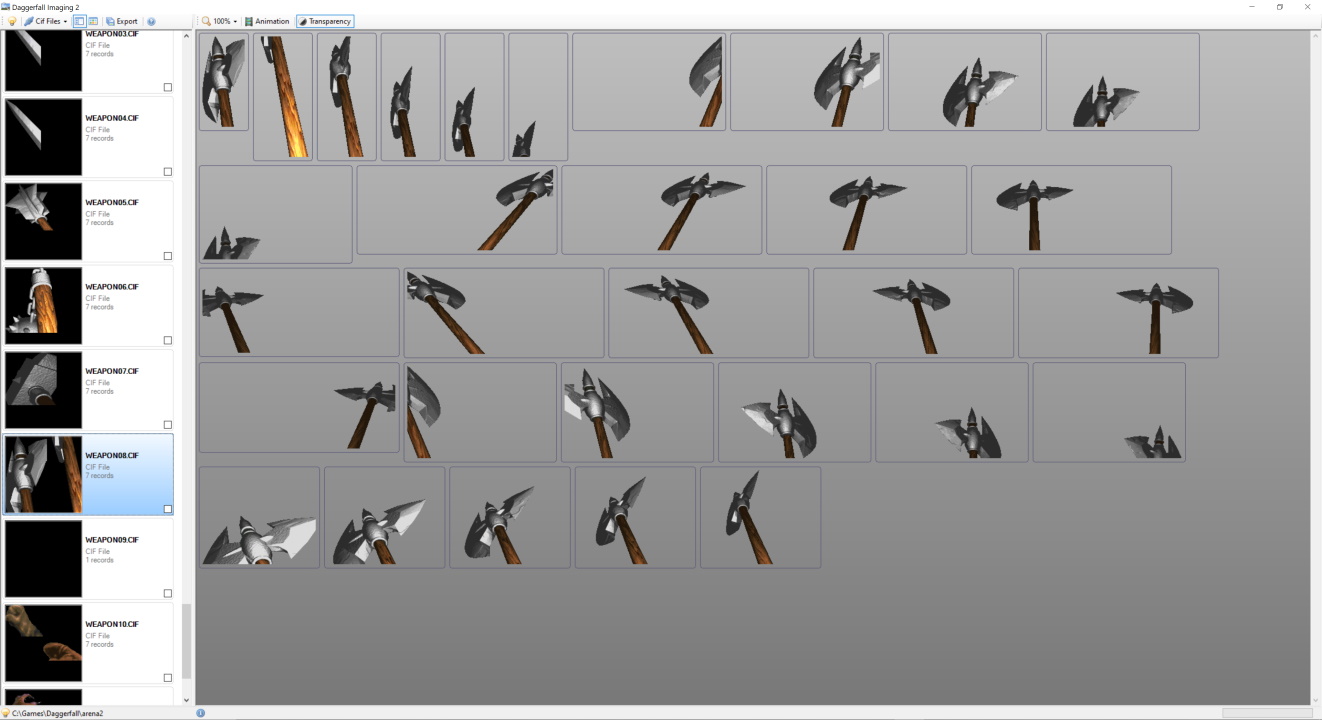 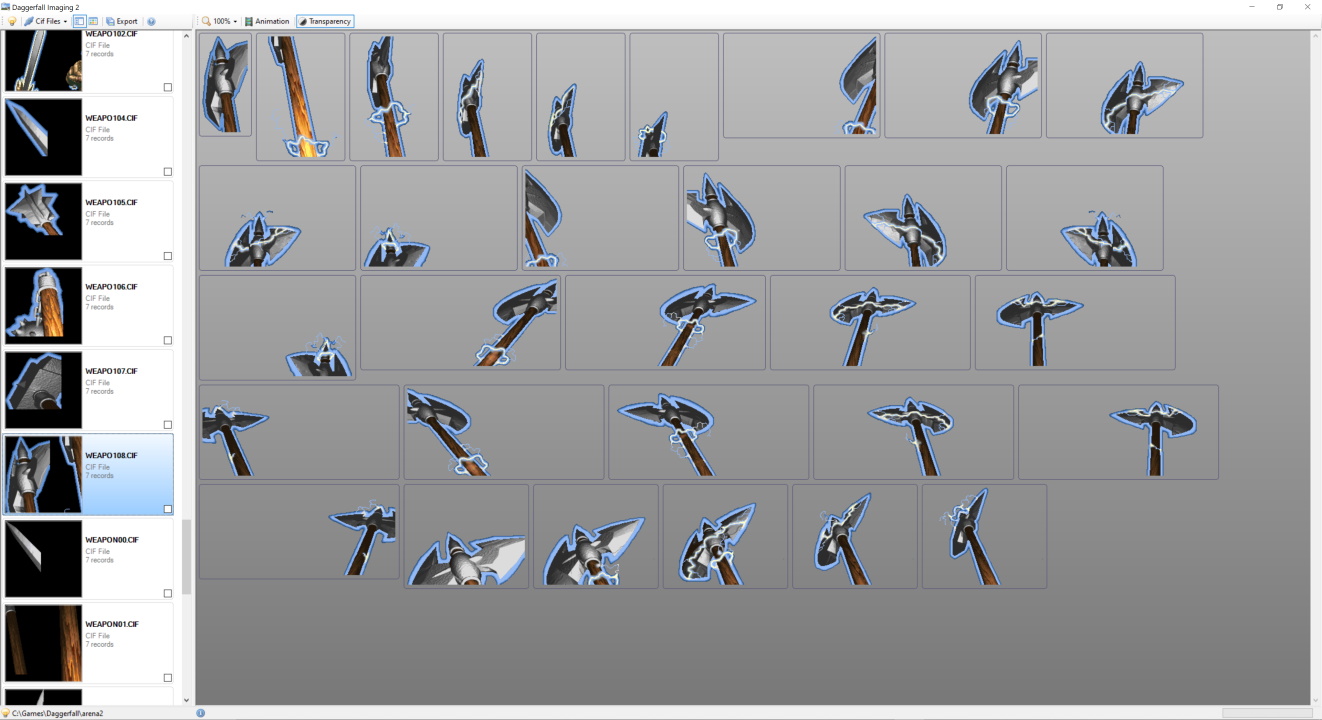 
This is difficult to fix in the core however as the problem is in the WEAPO108.CIF file, which is not part of the DFU core. It's part of the data players provide on their end. We inherit this bug from classic as we're using the same data.
Top

Thanks for the example and the comment Interkarma, yes this was quite difficult to spot and realize what is really happening here

Teamwork with Lacus lead us to this discovery, I would never find it on my own.

Right, this is not a core issue specifically.

But it could be solved by changing what the core program calls for.

There must be some mechanism which can see that you make a mouse move requesting some kind of attack. And than it checks the weapon you hold and plays the appropriate animation. So in the case of WEAPO08 it would switch the 3 wrong attacks?

I dont believe its impossible

Anyway.. if this is something which is officially not going to happen, I change it only on my side in the mod. I switch the attacks and its solved.
But I think it would be sad to have this bug in the game (esp now when its finally discovered!) and Id prefer some other solution than having to mod the game to solve the bug...
Top

Idk but judging by the reactions here and this bug being removed from the Git bug list - this will be a "feature" of DFU?

Would be cool to know that. Because if I spend the time repairing this bug in my mod, and than someone repairs it in the game, it will render my mod buggy and my work obsolette.
Top

We work around loads of weird problems in classic data, I don't see why this can't be one of them.

But this is still a problem in classic game data on the user end, not in DFU itself, and the path to working around that needs to be evaluated to invent a solution that doesn't break anything else.

I'll move this to Bug Reports for later review. That way you know it's in a queue and will be looked at eventually. I just can't comment at this time what the outcome will be, how this will be resolved, or when someone will look at it. The issue is fairly low priority to some of the other things we need to fix.

okay, thanks for reply Interkarma, I will leave it as it is and I will hope this gets repaired somewhere down the road in the future

considering what was already achieved, this might be relatively easy fix to do
Top
Locked
27 posts