I keep writing up the same posts over and over to answer questions about what mods to use etc. So I decided to just make this topic I could link to instead

Installing Daggerfall
Use the guide here to install DaggerfallGameFiles

Do not trust any other installs.

On the startup screen I strongly recommend activating "CLICK TO ATTACK".

Before starting the game, choose "Advanced" and set up your settings like this.

NOTE THE LIGHT SETTINGS. These will make a huge impact on the games atmosphere when combined with the Improved Interior Lighting mod. (Also set Dungeon Light to 0.2 in the Better Ambiance mod) 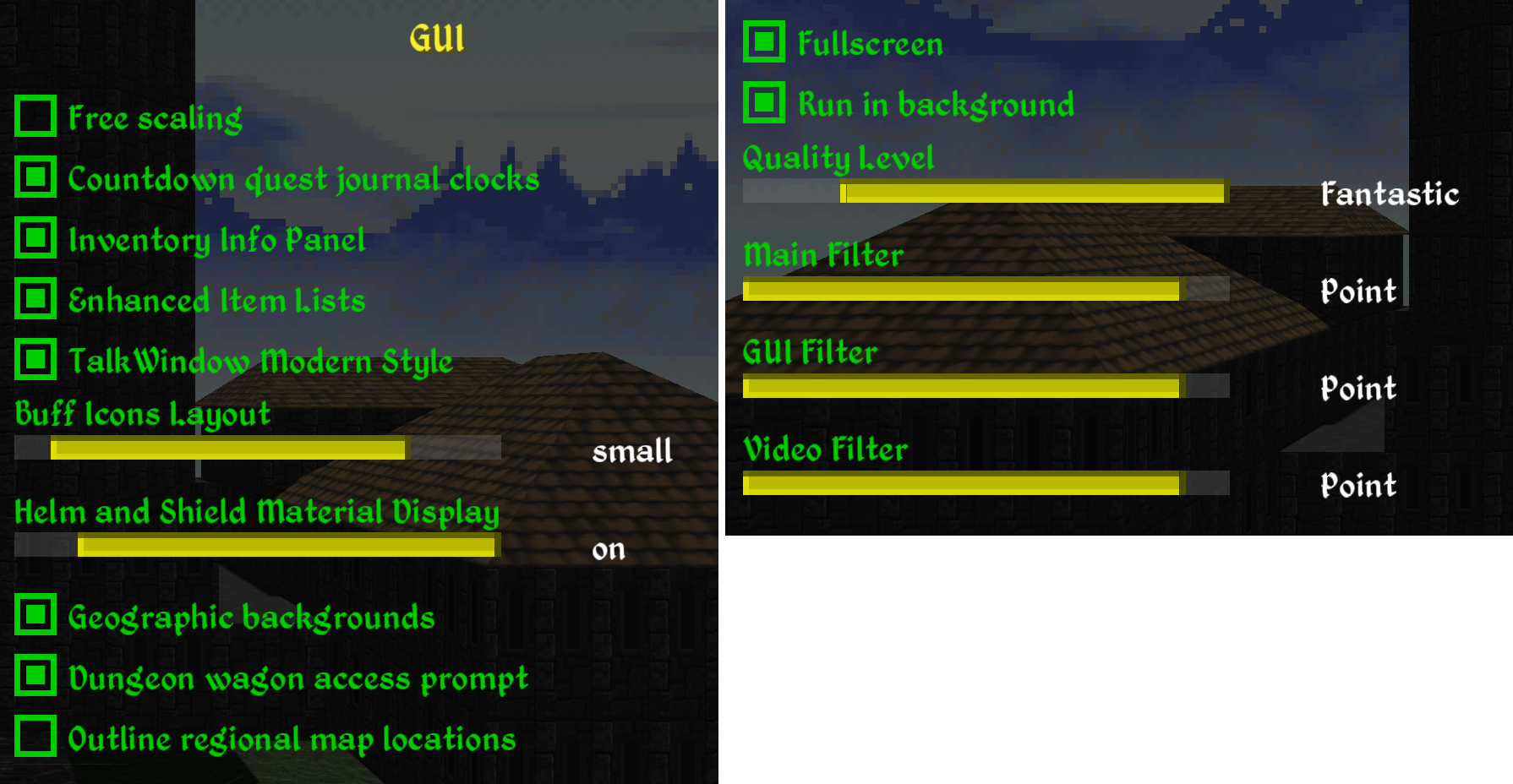 Mods only available on the forums:
Enhanched Sky(Switches out the pixel art sky with a more realistic sky that visually fits terrain mods)
viewtopic.php?t=1542
Masked Road Textures (improves the look of the Basic Roads mod. The vanilla look is very industrial.)
viewtopic.php?f=14&t=4053

Search for the mods below on https://www.nexusmods.com/daggerfallunity :
Archeologist (Adds a guild and makes language skills not useless.)
Arenas Adventures (Adds more quest)
Basic Roads (Adds Roads and paths to travel on using the Travel Options mod)
Better Ambience (Adds and improves many sound and visual effects in the game.)
Beyond Ashes: Bounty Hunters (Adds Bounty Hunters to the game to track down and take down criminal players.)
Climates & Calories (Adds heat/cold effects as well as food items and starvation)
Convenient Quest Log (Improves the quest log, so it is not just a jumbled list.)
fixed paperdoll skin (Makes the skin tones of faces and bodies match for the player character)
Helmet Swap (Just a small cosmetic mod to make barbarians have horned helmets and archers not.)
Improved Interior Lighting (Makes the houses and dungeons much more atmospheric)
Interesting Eroded Terrains (Makes the wilderness terrain much better.)
JayH's Random Little Quests (Adds some random events)
Jobs of the Thieves Guild (Adds more quests to the thieves guild)
LevelUp Adjuster (Can be used to change what happens when you level up.)
Limited Gold Shops (Gives shop a limit to how much they can buy)
Lousy Lycans (Changes lycantrophy to be a curse with cool side effects.)
Meaner Monsters (Buffs a lot of the monsters in the game and nerfs a few that are weirdly powerful)
Meaner PCO (Makes sure monsters stay mean when combined with Physical Combat Overhaul mod)
Mighty Foot (Allows you to kick without unequipping items.)
Physical Combat and Armor Overhaul (Changes and improves combat calculations to make more sense.)
Quest Pack 1(Adds lots and lots of new quests to the game, making it much less repetitive)
Quest Offer Locations(When offered quests, they say how far away the quests goal is.)
Races Redone (Adds a lot more effects to your race selection)
Readied Spellcasting Hands(Makes you hold your hands up when you have a spell ready to cast)
Realistic Wagon (Makes horse and wagon in the game act more realistic)
Reasonable Blood (Visually changes enemies to not have blood effects if it makes no sense)
Repair Tools (Shops sell items that can be used to repair partially damaged items yourself)
Rumors of the Iliac Bay (Adds more rumor results to the NPC conversations)
Roleplay&Realism (Lots and lots of tweaks and improvements to the game)
Roleplay&Realism: Items (Lots and lots of tweaks and improvements to items and loot)
Skilled Spells(Removes spells level scaling)
Skulduggery(An overhaul for thief mechanics.)
Start Saver (Makes a save after character creation. With this modlist, you might need it.)
Taverns Redone (Makes most taverns MUCH better looking)
theJF Quest Pack (Adds more quests)
Travel Options (For realistic traveling. This mod-set doesn't really work without it.)
Torch Taker (Allows you to take the torhces from dungeon walls))
Unleveled Loot (Makes loot generation not level scale. Also makes shop quality count a lot for their stock.)
Unleveled Mobs (Changes the spawn tables to not care about your level))
Vampiric Options (Gives some options and mechanics changes to improve the vampire experience)
VillagerImmersionOverhaul (Makes the towns have much more interesting villagers)
WindmillsOfDaggerfall (Adds windmills. They're a nice addition)
World Tooltips (Removes the need to click everything in Info Mode all the time)

Mod Settings
Leave all mod settings at default except:
LevelUp Adjuster: Activate "Retroactive HP". Consider setting Attributes to 1-9 and if you want a challenge, set starting attributes to -10 or -20. (When making character, make sure this combined with Races Redone doesn't reduce an attribute to 0)
Better Ambiance: Set Dungeon Light to 0.2
Mighty Foot: Set it to to a valid key code. Personally I use "Backslash", but this depends on your keybindings.

Honorable Mentions (Mods you might want to use)
Warm Ashes (This one is a bit in flux at the moment. Keep an eye on its updates and use it at your own discretion.)
Optional Main Quest (Lets you remove the Main Quest. Goes well with Random Starting Dungeon)
Random Starting Dungeon (Start in random dungeon. WARNING: very deadly with this modlist)
A New Main Quest BETA (Currently in beta but fully playable)
Ironman Options (For a either a perma-death run, or setting the options so you lose some progress, but not all.)

Now, I do not use graphics overhaul mods because I like how Daggerfall looks and you can do a lot with the Advanced settings in Daggerfall Unity. Also, some of these mods add new items and NPCs that will not be graphically updated. Leading to a mix of smooth and pixelated images.

As for what the mod set does: Makes the game harder and more realistic while also improving a lot of mechanics, adding a bunch of QOL changes and makes the game deeper and more, dare I say, immersive.
Now that said, it might not be the best mod set for a first playthrough, as it will be mostly harder. It does fix a LOT of stuff that you will find really weird and stupid in the game though and makes it a richer experience.


And finally: When playing with this modlist I only save by using F9 quicksave. This works fine as far as you're aware of the danger poison and disease poses. It's not as hardcore as playing actual ironman, but makes for a smoother play where you learn to just relax and roll with the punches after a while.
Last edited by Ralzar on Fri Jul 30, 2021 8:56 am, edited 32 times in total.
My released mods

I've tried searching Nexus and these forums for "Better Ambiance" but can't seem to find that one. Has it changed names?
Top

KovuCougar wrote: ↑Tue Oct 20, 2020 1:05 pm I've tried searching Nexus and these forums for "Better Ambiance" but can't seem to find that one. Has it changed names?

I see it's a spelling error

Hi Ralzar. Don't know if this is an appropriate place to ask this about your setup and settings, I suppose it's a bit of an odd question.

I'm using Better Ambiance mod trying to make dungeons as dark and gloomy as possible and was curious if you use the Dungeon Fog settings and what your opinions are with that. I can't seem to make up my mind if whether or not I like the fog in my dungeons.

Haha, exactly where I am with that mod effect as well.

I really like the effect and how it makes dungeons a bit more unique. But I kinda hate how the fog makes the dungeons brighter instead of darker.
My released mods

Agreed, the shade of blue fog is too bright for the dungeons. I wish I could change the color of the fog, might be interesting.
Top

Removed Magiconos mod for wear and tear on equipment as apparently this same code is running in his PCO mod. So I was wearing down stuff at twice the rate

Updated for 0.11.4 now that I have played a while with my new modlist.

It would be cool if it did that, but I don't think that's Mighty Foot's purpose