Problem with classic save import.

Post here if you need help getting started with Daggerfall Unity or just want to clarify a potential bug. Questions about playing or modding classic Daggerfall should be posted to Community.
Post Reply
18 posts

Problem with classic save import.

Got a bit of an issue after migrating from DOSBox to Unity. I haven't noticed that right away because I was busy advancing in Dark Brotherhood, but my Main Quest chain seems to be broken. Some of it might have been broken before, but that's an optional part that I could live without. Sadly, what definitely broke after loading a classic save in Unity is not optional.

So here's my main quest tree so far: 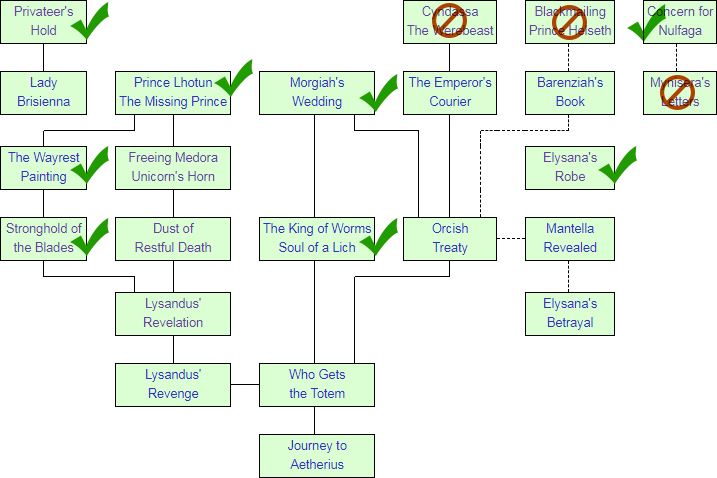 I have marked the quests I have already finished with a green check mark. Up to that point I was playing in DOSBox.
Even before moving to Unity I have noticed that something might be broken with Queen Aubk-i, but I wanted to give it time. I have reported my findings about Nulfaga, the queen rewarded me, but the quest remained in my log as if I was still to deliver the report. In-game months have passed and I have not received a letter that should have triggered "Mynisera's Letters".

I could not start "Blackmailing Prince Helseth" because I have unknowingly tombstone it myself by completing Elysana's Robe first. Not a biggie.
So that was problem No1, the unimportant one since it's all optional (even though I would like to play through it).

Problem No2 begins with Cyndassa. After checking my last DOS (and first Unity) save game, in vanilla she will give me "The Werebeast" quest no problem, but in Unity she just initiates regular NPC dialog and I cannot make her give me the quest, so this is where the chain is definitely broken. That doesn't mean it's not broken even more, because after importing my save game my quest log is completely empty. After using console command to purge quests I see that one quest was purged, despite the log being empty, so "something" is lurking behind the surface, I just don't know what since I don't know how to check that.

I wanted to try "setmqstage" console command but from what I understand it lowers your level and each stage is contained (as it the followup stage dosn't trigger)? Is there any way I could non-destructively "repair" my save game, or do I have to either start over/trigger each mq stage manually just to play through it/use setmqstage 1, somehow restore my level and replay everything up to that point without losing all my monetary/material/stat progress?

Quest state isn't imported from classic saves, but global variable state is. These variables tell the backbone quest where you are up to, e.g. the "MetLadyBrisienna" var is set after your first meeting.

If you'd like to resume the main quest from a classic save, use "setmqstage 1" to spin it up again from your imported global vars. Setting stage 1 doesn't lower your level. You might have to replay a couple of quests, but it should start from roughly where you left off.
Top

Can I set the stage any higher without breaking anything in the chain? Just tried stage 1 and oof, everything starts over from the very bottom of the ladder

When I've tried stage 5 it seems to be working OK as this is exactly where I should be, but will it continue from here up untill the end of the quest chain?
I will start over if I have to, buuuuuuuut you know...
“The reasonable man adapts himself to the world: the unreasonable one persists in trying to adapt the world to himself. Therefore all progress depends on the unreasonable man.”

Setting stage 1 doesn't start from the bottom of the ladder, it starts from wherever you were up to based on global vars. Just ignore the popup message after running command, the backbone will silently catch up shortly afterwards. Use the quest debugger (LeftShift+Tab) to cycle open your global variables list on the right of screen. This is the only quest state that matters. In fact, it's the only long-running main quest state Daggerfall uses.

I know I should trust you on this, but after setting stage 1 I have literally got all the quest starting letters from the messengers and when I went to the initial quest givers that sent the letters they would sure be talking to me like they see me for the first time and hand me the starting quests. That's why I assumed it started me at the very beginning.

As for the variables, I'm not sure what I'm looking at so here's what it shows: 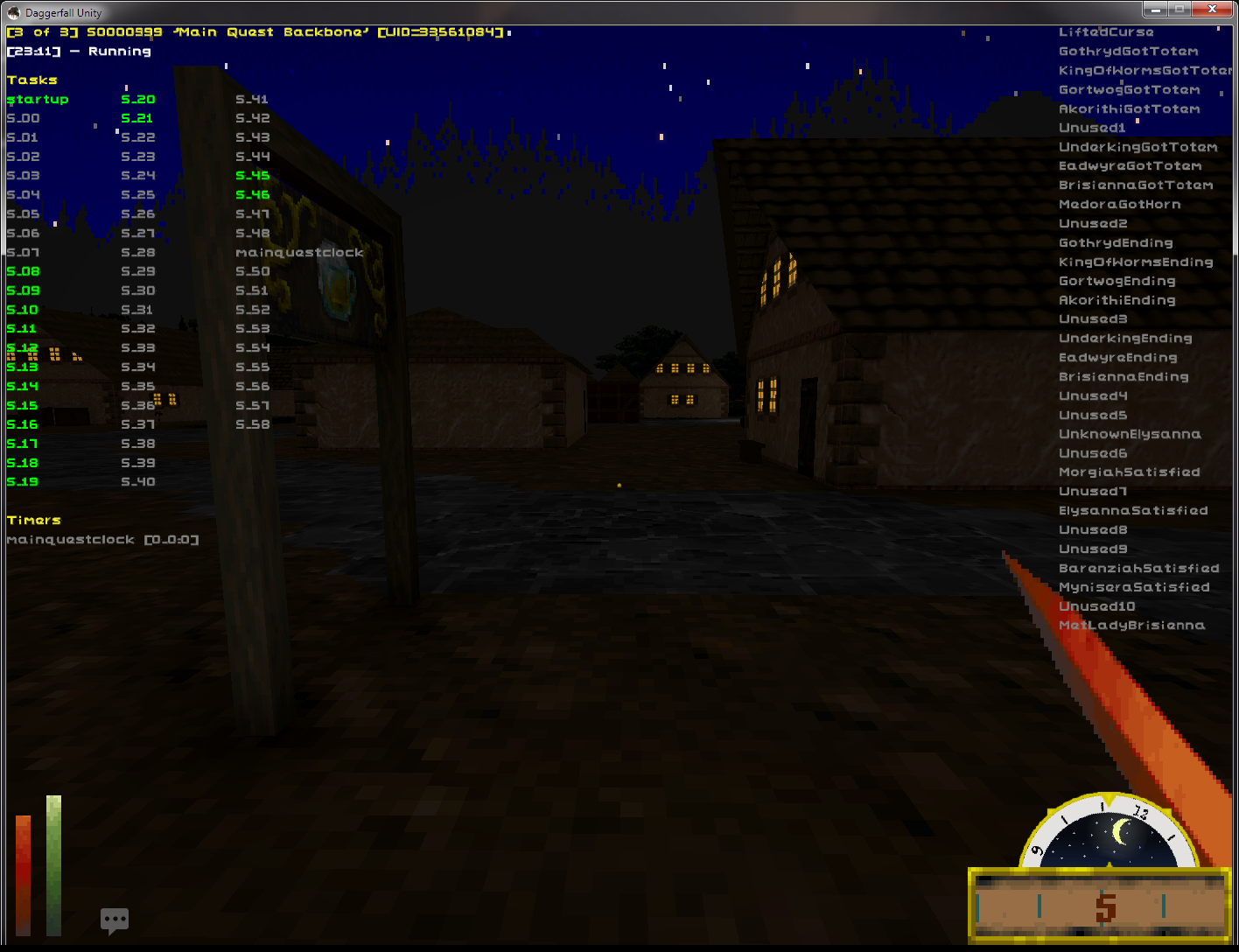 No green on the right. I suppose that's bad for me...
Last edited by MaxiM on Wed Jun 12, 2019 11:03 pm, edited 1 time in total.
“The reasonable man adapts himself to the world: the unreasonable one persists in trying to adapt the world to himself. Therefore all progress depends on the unreasonable man.”

Check your global vars as described above. You'll need to use LeftShift+Tab to cycle this open and they will appear on the right-hand side of screen.

Your global vars are where you were up to at the time your classic save was imported. As you complete different stages of the main quest, these global vars are raised and gate open/closed other quest chains in backbone quest.

Any parts of the main quest that have been completed (e.g. "MetLadyBrisienna" is raised and shown in green on the global vars list) will not need to be replayed. You shouldn't even receive Lady B's letter once this var is raised.

Any parts of the main quest that have not been completed (e.g. "BarenziahSatisfied" is still lowered and shown in gray on the global vars list) will need to be replayed.

It's fairly easy to churn through the quests once familiar with them. I use a combination of "tgm", "tele2qitem", "tele2qspawn", "tele2exit", and "killall" to quickly clear objectives dungeon then cast Teleport back quest-giver for hand-in. You can smash through most of the quests in a couple of minutes each once you have the knack. The annoying one is Mynisera, who is a static NPC so the "tele2*" commands aren't that useful. As you need to revisit her a few times, I go there once and set an Anchor to get back there faster on the next couple of occasions.
Top

Hmm. Not sure why those are all grey. If you had completed Morgiah's Wedding for example, the "MorgiahSatisfied" flag will have been raised.

You didn't use "clearmqstate" or "setmqstage" with a value greater than 1 at all? These are the only commands that manipulate global var state from whatever was imported from classic save.

What I'll do in June builds is switch the "setmqstage" command from a debugging tool to a catch-up command so it can be used non-destructively with any character.
Top

Yeah sorry for editing the post as you were replying, but I forgot you said to cycle shift-tab 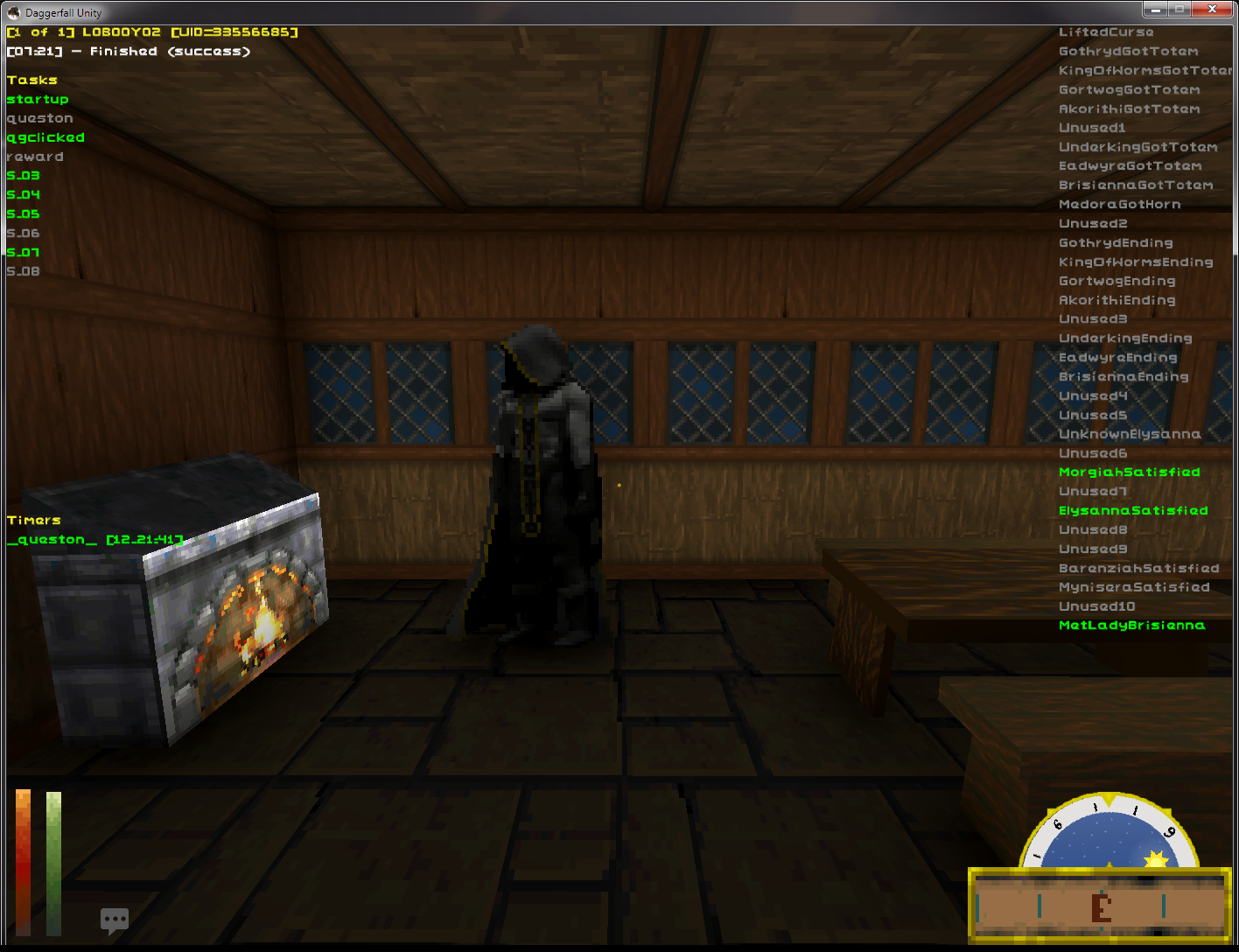 So should I just continue right after loading? The werewolf cooking lady won't give me the quest even when I bring her wine and roses and Aubk-i won't send me the followup letter after her crazy granny quest. Not sure what to make of this. I feel and probably sound dumb.
“The reasonable man adapts himself to the world: the unreasonable one persists in trying to adapt the world to himself. Therefore all progress depends on the unreasonable man.”

Interesting, stage 1 shouldn't reset vars. I thought I changed this some time back. I'll recheck my work and get back to you later. Either way, I'll change this behaviour in June builds. "setmqstage" has fulfilled its original purpose and needs to be more useful.
Top

Sounds awesome, man. Just let me know if I should wait for the next build and I don't know... become productive for a few, or try the ("tgm", "tele2qitem", "tele2qspawn", "tele2exit", "killall") method for the time being? I've gotta say, my DF itch is not an itch at the moment. It's a full blown inflammation.
“The reasonable man adapts himself to the world: the unreasonable one persists in trying to adapt the world to himself. Therefore all progress depends on the unreasonable man.”