Problem with a basic protect from assassination quest (a0c01y01)

Post here if you need help getting started with Daggerfall Unity or just want to clarify a potential bug. Questions about playing or modding classic Daggerfall should be posted to Community.
Post Reply
7 posts • Page 1 of 1

Problem with a basic protect from assassination quest (a0c01y01)

SAVE23.zip
This is a zipped file of the Save just before I enter Wickwing residence which is straight ahead.
(319.29 KiB) Downloaded 18 times

{UPDATE: It fails even if I don't save or load within the building, even if I don't loot anything, just a couple real-time minutes or less after I kill the Assassins, so maybe I'm not supposed to do that or Morgyana always fails you if you succeed. Mysterious or bugged, unsure. Also updated the name of the Residence as it is Wickwing not Wingsley}

So Morgyana Masterley located at an Inn offers me a quest to Protect her from Assasination at the Wickwing Residence between 9 and MIdnight. I don't seem to be able to escort her, although I forget how that is done in Daggerfall anyway, which is something I'll have to learn.

So anyway, I go down to the Wickwing Residence finding it by asking about its location via the General Tab, I guess for locations. That gives me its location when close enough, and I'm info clicking on the residences if needed to get the name. So I find it with a little grunt work.

So far so good.

I try to enter the Wickwing Residence and it is locked. So I decide to use the Stealth Mode, and it lets me in. I remember a post about buildings not having a lock level yet in DFU, so that's okay as well.

Still so far so good.

In effect, I have to fight with several assassins who came to kill her, I suppose. There are numerous ways to fail this quest, I'm just going to list a few of the odd ones:

1) Even if I survive and kill all the assassins, if I load up a save done after they are killed, the Quest at first seems okay and still on the list, but a few seconds later if I check the Quest Log, it is shown as failed in the Finished Quests section. It takes a few seconds for this to happen, or you have to let it load and be out of the inventory etc menus for it to occur.

2) If I exit the house by accident, hitting the wrong door, I will fail the quest. Also it seems that killing the Assassins and exiting before Midnight, fails the protection task as well, probably because there could be a chance for more assassins up until Midnight, although none have appeared yet so far.

3) I think if I save the game at all, even without reloading, I fail the quest. Not absolutely positive on this, but I'm testing it further.

4) I'm going to have to double check this again, but it seems that if you kill the assassins and then wait for midnight to pass, you also fail the quest. (But it is possible this was a loaded save from after the assassins were killed, so that may be to blame here)

Now there are two possibilities which may be causing this issue and requiring me to just load a save from outside the building and not load from within, and maybe not even save from within the Wickwing Residence.

I'm guessing that DFU, and maybe Daggerfall did this as well, considers any loading of a save as an EXIT FROM THE BUILDING AND THEN RETURN and as I mentioned before in 2) that will fail the quest.

Likewise it is perhaps even possible that SAVING THE GAME WITHOUT A RELOAD, is considered exiting the building and fails the quest. That would surprise me, but it is worth checking again.

There is another possibility though. There was a clothing pile on the floor in one of the closets. I always pick that up. It doesn't cause an immediate failure of the quest though, so I think that is allowed. I think I remember getting away with that usually in the old Daggerfall Original also.

Lastly there is the possibility that killing the assassins fails the quest, which I find in this case a bit hard to believe.

So, I'm going to try one more time to LOAD A SAVE FROM JUST OUTSIDE THE Wickwing Residence, and try to survive and kill the assassins, then loiter until it is about midnight, and see what happens. I will not exit before Midnight, since the 9 to Midnight is the Protection Timeframe.

Loading any save from within the Residence fails the quest.

Possibly saving from within the Residence fails the quest, not 100% sure this.

Loading a save from within the Residence shows quest as active for a few seconds, but by after full loading and say 10 seconds in real-time, it shows it as failed. This even though all I did was check the Quest Log a few times and check the current Time a few times.

Any idea what I am doing wrong? Pretty sure this is a standard quest. If loading a save from outside the Wicksley Residence and going straight thru without saving doesn't work, I'm going to just take my loot and live with the Rep loss, but then I'd think the quest is probably bugged, unless anyone has any ideas.
Last edited by NoobioDF on Fri Jun 28, 2019 1:58 am, edited 3 times in total.
Top

Re: Problem with a basic protect from assasination quest

Wow, okay this time I failed it simply by loitering. The assassins did not appear, and the quest went into the failed column by 11 pm time in game.

(It seems that Loitering is iffy. Sometimes you can fail with it, sometimes not. Here seems to be the pattern. If the Enemies occur during the first loitering, you are fine. So if I loiter 2 hours I'm okay and they appear. If not, it is iffy. Might be because they tend to come right at the border of the 2nd loitering attempt, unsure. But two Loiterings are iffy.

Man, that's depressing. So I can't loiter? That's a long 3 hours and new to me. So either the Quest is bugged somewhere or my an earlier save, or even loading a save from before I enter the building is not early enough, which makes no sense.)

I did pick up the clothing pile loot again, even though I was not visible and it did not fail the quest when I checked it minutes later.

Damn. Ok, I'm going to try it again, with no looting and no loitering. Might be just that the Assassins bugged out and did not appear.
Top

Re: Problem with a basic protect from assassination quest

Nope, it just fails and always at the same time onto the clock, seems like 22:34:40. It is about 2-4 real life minutes after I kill the Assassins. So maybe it was a trap and I'm not supposed to kill them. Or perhaps, Morgyana is just a liar and never pays here dues, because it is a trap.

The enemies do give me a -- this isn't any of your business pop-up message, but I think they are still attacking me at the time, although I may be wrong there.

At any rate I give up.

Mysterious or weird quest I cannot be sure. It is a bit buggy, with loitering sometimes allowing the There Are Enemies Nearby pop-up message, and sometimes not. Just don't load a save in the building. You may possibly be able to save in the building without failing the quest. But since a minute or so after you kill them you fail the quest, it doesn't change anything except ensure you can survive another fight on the way to the Inn, selling stuff, and healing up.
Top

Re: Problem with a basic protect from assassination quest

If you mean the Standard Protection quest M0B21Y19, Jay_H has some fixes in progress for this that will be part of the Alpha release (see roadmap).

He's managing a document on Google Sheets that shows his progress on classic quest fixes. We should make a sticky about this one so people can track it. I don't have a time-frame yet on when Jay will be ready to merge these fixes.

Even unedited, this quest doesn't produce any problems for me.

I added a zipped archive of the Save23 where I am just outside the Wickwing Residence. Quest is already taken, and it is supposed to happen between 9 and Midnight, but it is not yet 9 PM.

Couple of other things, if important.

Morgyana stays at the Inn the whole time. She does not appear in the Wickham Residence. Just the enemies will, most of the time.

I have found that loading a new save is not always a great idea if done too quickly after a death, or if in the same interior of a building. The game seems to also remember part of what was in the last save, not much, but some things, especially if loaded within the same interior. Safest is just to exit the whole game and then reload.

But also reloading too quickly can cause other issues, like no saves showing up on the Save/Load list, or a hang and crash of Unity. So I try now to avoid that.

So it is possible that some earlier saves of mine got corrupted a bit, as I was not fully aware of this. I almost never load within a couple seconds of a save or death, however, this game seems currently to need a larger delay that that to guarantee no issues are caused. More like over 7 seconds to be safe.

The Loitering is sometimes not effective, but it isn't the Loitering which is causing the problem, as I've tried it without loitering and failed anyway.
Top

There are two problems at work:

1. There isn't nearly enough time for the quest to complete itself. Before the first hour runs out, it's already time over: 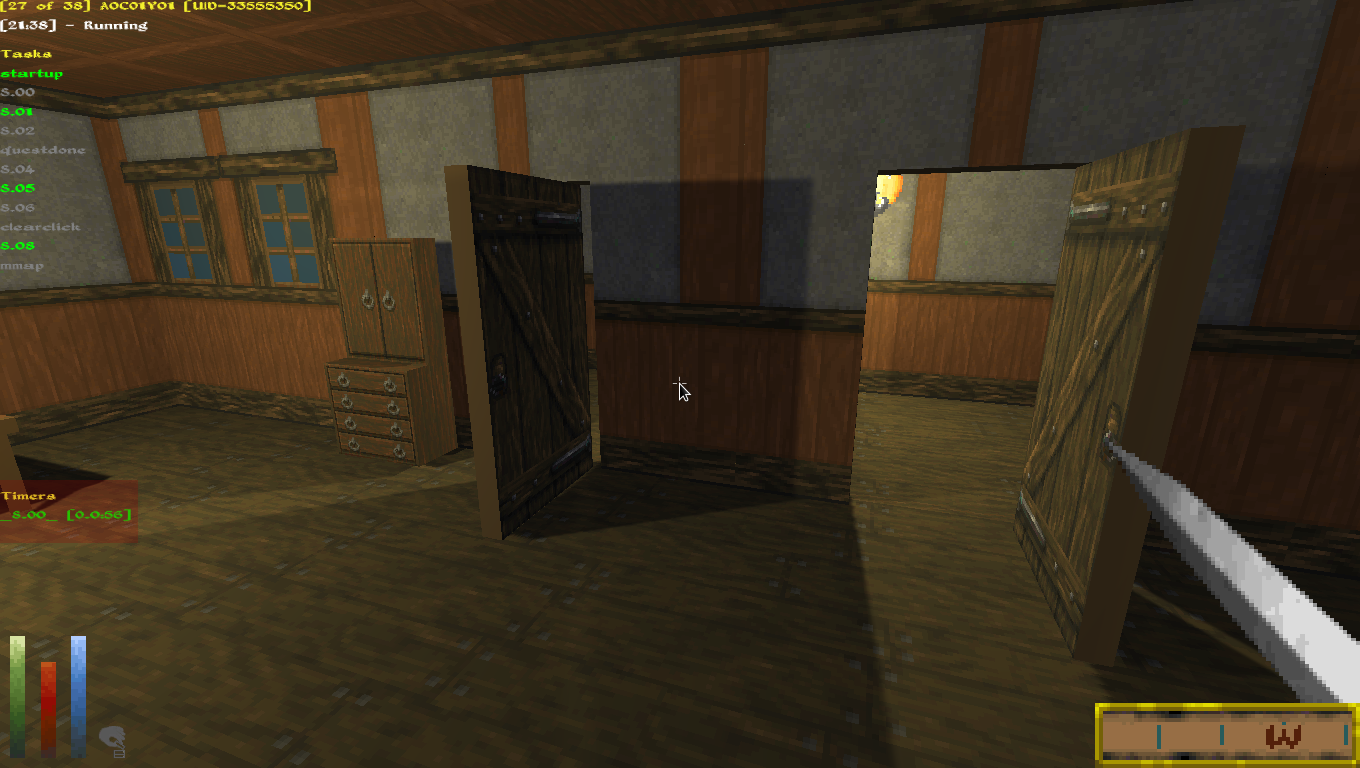 I've removed the flags from this quest's timer so it'll always last 27 hours.

2. I don't recognize this as a place where NPCs can spawn. I presume some houses have quest markers and others do not. Slay the enemies or not, there's no way to talk to the innkeeper because he/she won't appear here.
Come join Lysandus' Tomb, a Daggerfall Unity fan Discord.
See the Daggerfall Unity Wiki on the UESP.
Top
Post Reply
7 posts • Page 1 of 1