Post here if you need help getting started with Daggerfall Unity or just want to clarify a potential bug. Questions about playing or modding classic Daggerfall should be posted to Community.
Post Reply
10 posts • Page 1 of 1

Just not sure if this is intended or not. I noticed that if I choose Blunt or Polite when talking to someone, then exit and enter a conversation again, the tone returns to Normal. This is classic behavior, but in previous versions of DFU the tone would remain selected, so I decided to mention it here.
Top

You're right, actually in previous versions tone was also reset to normal just like in classic but the checkbox was not, so I only fixed this display issue.
Top

Ah, so that's what was going on. Keep up the good work!
Top

Hi! I noticed that as well.

Would it be possible to make it so DFU remembers the last tone you used and keep it on?
It'd be very useful when you want to build up your etiquette/streetwise without having to switch tones for each question.
Excuse the gloom.
Top

Would it be possible to make it so DFU remembers the last tone you used and keep it on?
It'd be very useful when you want to build up your etiquette/streetwise without having to switch tones for each question.

Yes I agree, this would fall under ease of use with the only reason to keep it from defaulting to normal is that is how classic Daggerfall worked.
Top

I submitted a PR which makes tone remains in the same state between talk sessions until player decides to change it.
Top

I asked this question in the PR, but I'll do it here as well. We're questioning whether a selected tone should persist, but not why it has to be selected to begin with. The player wants the best chance of getting info. If I have an etiquette skill of 50% and I talk to a noble, why would I want the tone selector to default to anything but "polite" when talking to a noble?
Top

I answered on the PR but I will also here

With an Etiquette of 50%, there si still 50% chance you could fail the skill check which would grant an additional penalty. Selecting Normal is less risky in this case.
Top

Ah, thank you. I never would've guessed that it worked this way, and UESP is devoid of info here. I think most people (me included) assume that it's just a hard incremental bonus, not a chance to get a fixed bonus or penalty. In other words, I thought it was +1 to noble reaction for every 10% etiquette. not a % chance to get +10 instead of -10. How odd.

What makes it so odd is that these skills are usually low on starting chars in favor of combat skills. By the time your character has accumulated that much etiquette/streetwise, he's likely near top level and has done tons of quests. So they made a skill that wasn't going to be useful?

The only conceivable usefulness I can see is for a low PER criminal char with a low but not too low rep (like -9) boosting it into positive territory by talking to lots of people and getting the rare bonus. But you'd have to intimately know the formula and your rep. Because if your rep was -17, the bonus wouldn't matter. You'd just be wasting your time clicking on people and hoping for something impossible to happen. Even when you got the tone bonus, the reaction at -7 would be the same and you wouldn't even realize that you got it. 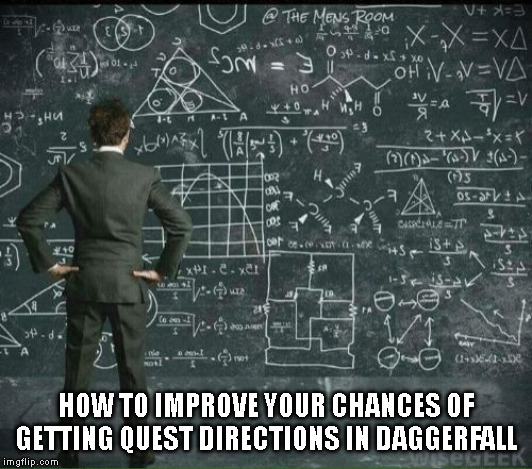 Yes, I agree classic mechanics behind NPC reactions are not quite clear. Especially since reputation is only taken into account when an NPC greets the player, but not when he answers a question.

We should probably update this system to be more coherent and logical. I may do that as a sort of mod in the future or maybe an enhanced interaction mode available as an option, so people could still use classic behavior if they prefer.
Top
Post Reply
10 posts • Page 1 of 1