Post here if you need help getting started with Daggerfall Unity or just want to clarify a potential bug. Questions about playing or modding classic Daggerfall should be posted to Community.
Post Reply
5 posts • Page 1 of 1

It started with The Werebeast. I killed Cyndassa's brother and returned to her for the reward. After getting the information, I left for a while, but returned some time later to get some noble quests. I clicked on Cyndassa and The Emperor's Courier started, despite the fact that you can only start that quest by talking to Mynisera. This dialog:

"Hello (player's name). I have heard much about you. Now you come to me with a very interesting tale of deception. So Cyndassa the maid says that Aubk-i opened a letter from the emperor addressed to me. I can tell you (player's first name), that she never delivered such a letter to me. I would like you to investigate this further, (player's name). It could be dangerous to poke into the affairs of Aubk-i without enraging King Gothryd, even though he is my own son. Are you willing?"
> Yes
"Good. I have long had my suspicions about Aubk-i's loyalty to the emperor. She is a daughter of the late King Cameron [sic], who ruled Hammerfell from his citidel [sic] in Sentinel. My husband King Lysandus, (random god) rest his soul, died at Cryngaine, as did King Cameron. Lysandus [sic] body was not recovered, so he has a monument erected there rather than a true tomb. Ah...my mind wanders. The emperor uses (courier's name) as his messenger in Daggerfall. (He/She) could be anywhere in the region delivering missives. However, (courier's name) is a member of the Knights of the Dragon. Go to (knight's building) in (knight's town) and ask for (knight's name). (He/She) may know where to find (courier's name). Try to find out why a letter addressed to me was delivered to Aubk-i."

was triggered and then I clicked on Cyndassa again, who gave me Aubk-i's dialog:

"The letter from the Emperor? Actually (player's name) this is rather embarrassing. The letter was stolen from me the same day I received it. I never did read it. I have been hoping that the letter would turn up, or the [sic] the Emperor would send another letter. If you find the letter, I would be most grateful if you would let me personally deliver it to Mynisera."

The rest of the quest played out normally. I then started Orcish Treaty. After scouring Orsinium for the letter, I found the room it was supposed to be in completely empty. After about an hour of clearing out the rest of the dungeon, I was frustrated enough to tele2qmarker, which sent me out into the void: 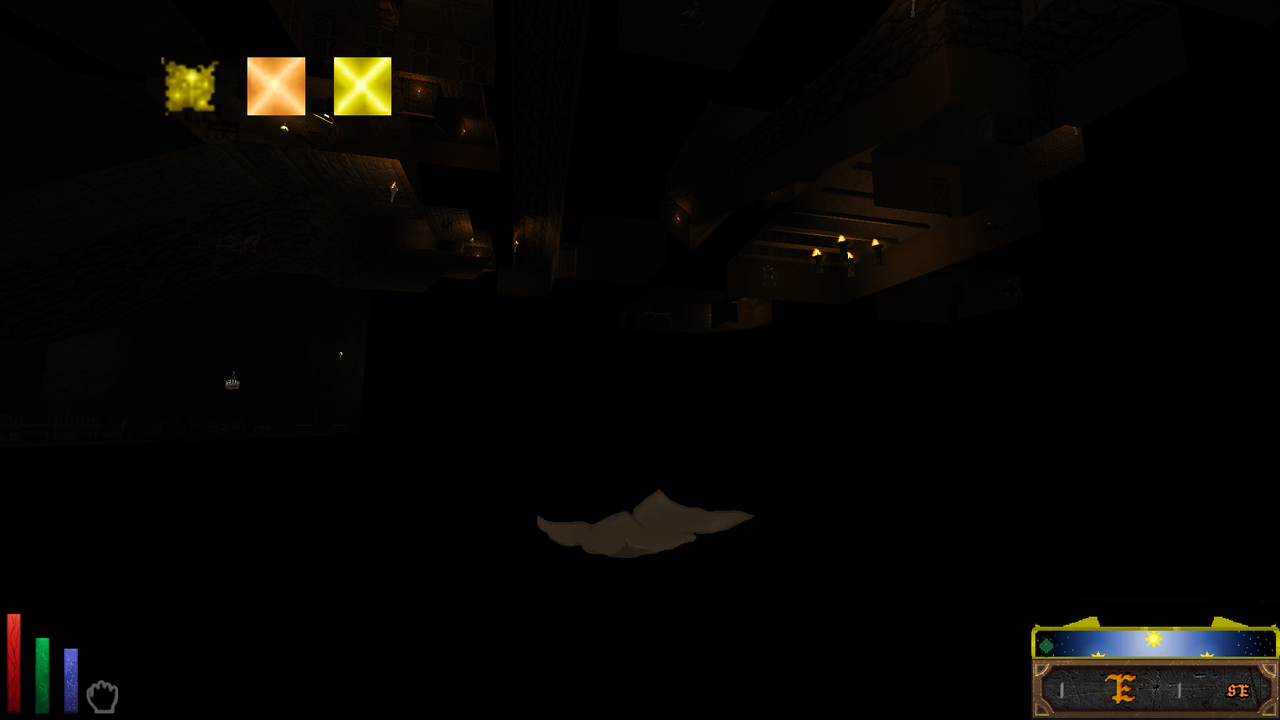 So I grab the stupid letter, exit the dungeon, and make for the Tuncart, the nearest port town. I stop at Burgcart for some food to keep my fatigue up and the entire town cbf rendering 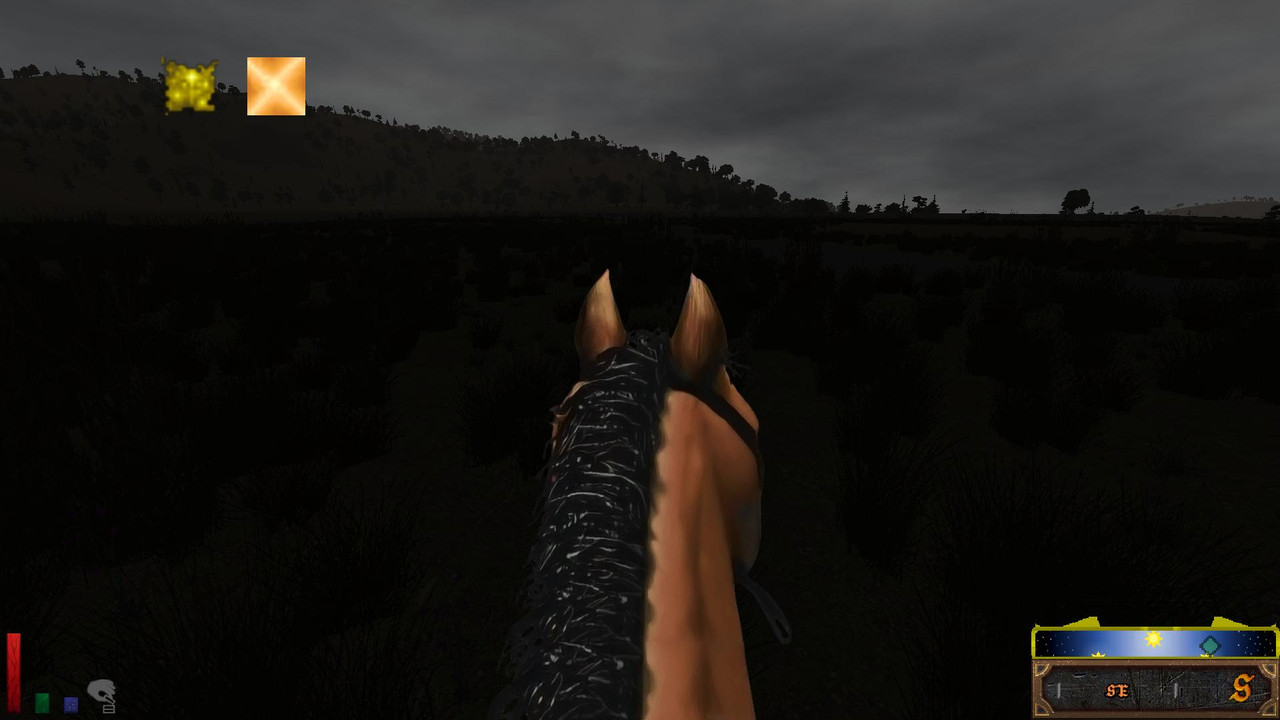 until I save and reload the game. After returning to Daggerfall, I handed in the letter, and left the castle. I immediately received two letters from friends about the Totem; I thought it took a few days to get those, I could be wrong though. Next I sail over to Wayrest to finish a Cartographer's quest, and as soon as I get there this doozy pops up: 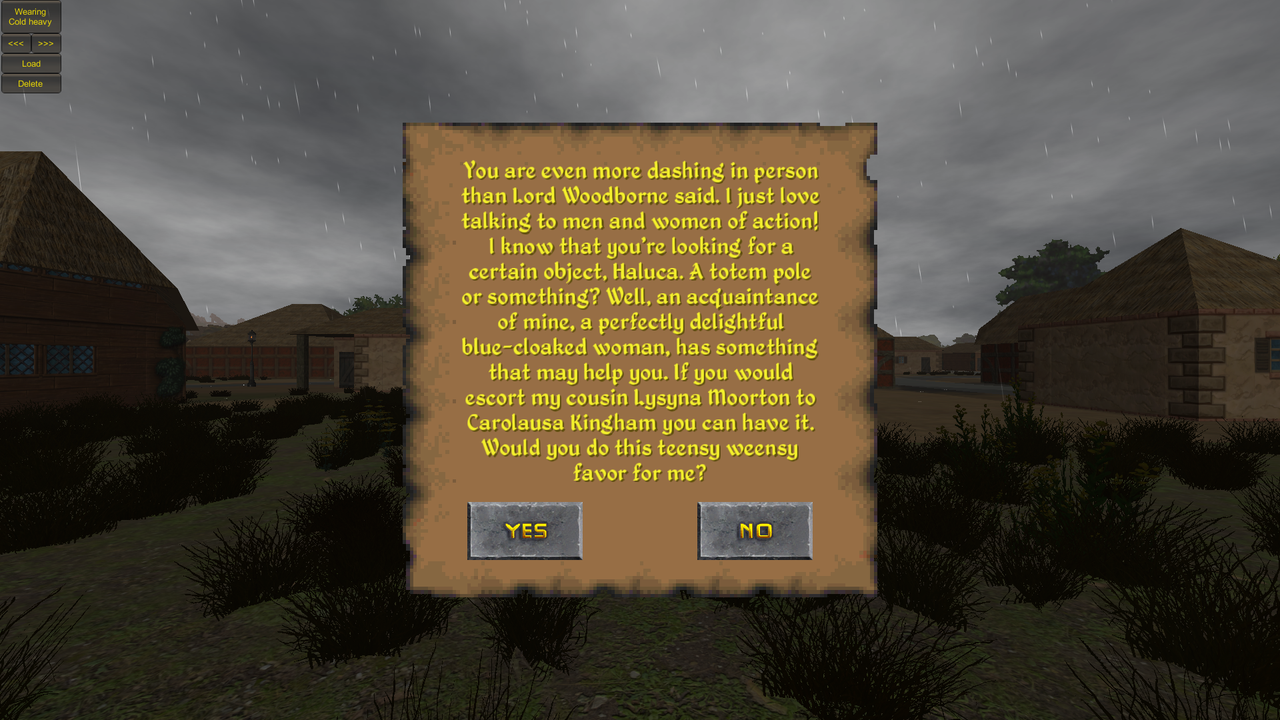 I accepted the quest, and finished it on my return to Daggerfall City; I did not encounter any enemies along the way since I conveniently had a teleport anchor already set up there, so it was done in about two minutes flat.

I've attached a savegame from just before picking up the letter from the void. What the hell is going on with my main quest?

(PS: There's something up with this forum too, having multiple spoiler tags is pointless because all show/hide buttons only trigger the first spoiler box. Tested in Waterfox and Edge.)

I think that last one (quest prompt popping up out of nowhere) is a bug in Tipton's Template decompiler.
The original code went like this:

see https://stellargames.github.io/Quester/#S0000009
But the Template decompiler doesn't understand execution order but groups everything by the ifs.
So it made something like this:

It groups code without a condition with the last condition before it.
So the unsetting of variable A (whether or not you clicked on Elysana) now only occurs when you answer yes.

In your case this means that because you clicked on Elysana after the quest started, variable A became true. It was never unset so as soon as timer B expired it showed you the quest prompt.

I created Pull Request https://github.com/Interkarma/daggerfal ... /pull/1687 to work around this.


Edit: For the void letter bug I have found the cause and created issue https://github.com/Interkarma/daggerfal ... ssues/1689 with two possible solutions. I'll let Interkarma decide which approach to take there.

Edit: For the mixed up Questor NPCs issue I have found the cause and created ticket https://github.com/Interkarma/daggerfal ... ssues/1688
I'm not sure what approach would best solve that one though.
Top

Beautiful. Thank you so much for looking into it/fixing it/bringing it to attention

The letter bug was reported a few times already, main report being viewtopic.php?f=24&t=2807
When a measure becomes a target, it ceases to be a good measure.
-- Charles Goodhart
Top
Post Reply
5 posts • Page 1 of 1