by Shalval
Other CompUSA quests issues. I have seen it mentioned in the forums but I am unclear if things fell through (Jay_H was working on fixing this quest last year?).

So far:
UESP reference and a save (just before I enter the victim's house) if it helps

by Interkarma
From the notes I have, Jay_H has performed a bugfix pass on this quest. It's also marked as "passed" in the quest list. I'll get to the quest in a bit, but first I'll cover the other questions.

The other building you're seeing is the _victim_ NPC's automatic "home" addresses. These are generated for every NPC in a quest based on a few parameters. Most random quests will use the NPC's home as a target for something. The authors of this quest chose to create a second home _victimhouse_, so you end up with two local houses being assigned. This could be tightened up. It's confusing but doesn't affect the quest.

Adding to the confusion is the random name generator picked the same surname for _victim_'s home and _darkb_, the Dark Brotherhood contact. All name selections like this are random. Residence and NPC names are all random and have no relationship to each other. They just sometimes line up due to the limited pool of names to select from.

The key to completing this quest is to keep asking around town to find the location of _darkb_ (Bernard Greenton in note), the Dark Brotherhood contact who organised the hit. This NPC is in a remote location, so the only way to find them is to enquire about him using Tell Me About > Bernard Greenton. 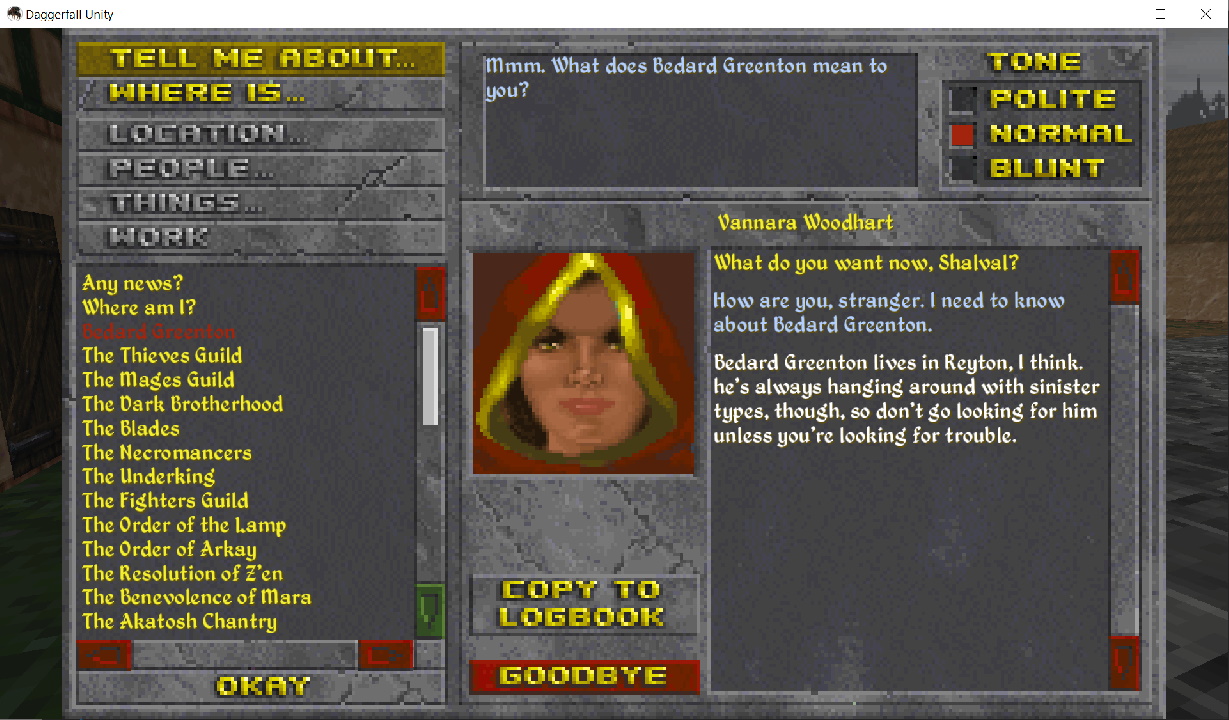 
After asking several NPCs about Bernard Greenton, I'm told he lives in Reyton. After heading to Reyton, I'm able to locate Bernard's house. This isn't too easy, as your character isn't the most personable type so it takes some time to get information from people.

After locating Bernard, he'll flee and you'll be attacked by a Nightblade. You need to kill this Nightblade to trigger the timer that eventually leads to the daughter contacting you in 10-20 days.

I waited for the letter, then found his daughter in Charenbridge Field. After fighting off more assassins, I escorted the daughter safely to The Woodsmith Residence in Aldtower Hill where the quest completed successfully and I received a magic shirt as a reward.

Other than the confusing and unnecessary residence at the start, everything else in the quest played out as scripted.

by Shalval
Ah I see, thank you! Good to see it is an untangled one and my apologies for the waste of time. Thankfully I have covered a lot of quests in the Fighters/Mages/Knight/Temple factions, so the rate of false positives in my reports should be dropping

I assumed the Person topic was the go-to when searching a person, and indeed the coincidence between the names confused me greatly.

And yes, my Dark Elf is having troubles socializing around these parts

by Interkarma
Thanks for testing and sending questions. I'm always happy to help when I can find time. This kind of review is how we catch bugs and make things better.

I appreciate you including saves as well, very helpful!

by Interkarma
Based on above experience, I've made a few minor tweaks to this quest.
As a fun side-effect of point 3, the now invisible NPC is standing over his dead body like a ghost.
All times are UTC
Page 1 of 1