I've just updated the Roadmap page all the way to 1.0.

This still needs to go through some refinement. The order things are implemented in may not exactly match roadmap. Some items may be moved back to a later release or swapped with another item. And I don't quite have everything on the roadmap yet. But it should represent a fairly good picture of how things are going to progress from here.

Once spells are mostly working (hopefully much of 0.5 will be done before end of 2017), remaining work is largely downhill in terms of difficulty. Many of the upcoming features are really just a small layer over existing systems. For example, shops are just a custom UI that hooks into the item, inventory, and loot table systems already in place. Same for stealing and player housing storage. A solid chunk of gameplay post-0.5 is nowhere as terrifying to implement as what's been achieved 0.0-0.5.

After 0.5, I'm going to take a short reprieve to recharge my batteries. I won't be stopping of course, but I will slow down dramatically for a few months. I will also be looking for community contributors to help code out the remaining odds and ends into the final stages.
Top

And this is the 0.4 roadmap right now. I will have faction and quest serialization stuff done in a few weeks. I just wanted to point out how close we are to building out the highlighted item right now. This is a huge milestone and I'm so happy things have finally made it to this point.

Awesome to see how far this project now!
Top

PS: there is a bug in the roadmap

Now that you've gotten to reputation gain/loss, I must recommend a change from vanilla dfall. I think reputation status should be a visible attribute, accessible from the character portrait screen. I also think that when a gain/loss happens, there should be text output for it similar to what happens with skill gains. It doesn't have to be descriptive, the game should simply tell you that reputation has changed.
Top

There's probably a good reason Daggerfall never exposed this information. There's hundreds of factions ticking away under the hood and many of them are never even used.

The reputation gain and loss through quests doesn't just affect a single faction target, either. Changes can chain to multiple targets, and would involve several rows of information to be displayed to player. The only mechanism Daggerfall has to show this alert is the scrolling notification text. It would probably be too much to take in and scroll past before player could even read it.

I'm not opposed to this as an idea, but it goes well beyond what I'd consider a "light-touch quality of life" feature. It would require heavy UI work that doesn't exist in the game, and ways of presenting information to player that likewise doesn't exist in game. So while a nice concept, it's outside of my scope for baseline Daggerfall Unity.

It would make a nice mod if done right however.

BansheeXYZ A really good way to see just how many different factions there are is to get a save game editor that lets you change your reputation.
Check out my patch to remove nudity, it's a WIP but it's coming along quite nicely.
Top

Yeah, I'm aware of how many factions and npc types there are. It's a complex system, and one of the reasons I never finished the original game was the sheer invisibleness of my reputation and what was affecting it. Never knew how close I was to a rank promotion, never knew why certain characters wouldn't talk to me, never knew how best to gain it.

I do believe that what I'm suggesting could work. But perhaps another way to do it would be to use the "info" action as a place to give your reputation #/100 with said npc similar to how interkarma's debugger is doing it. As well as a generic "Your reputation has changed" message when any reputation boost/loss happens. Would go a long way for playability.
Top

Not sure if you're following my Twitter updates, but you can already use the Info click to get faction rep of the last NPC you clicked on - provided the quest debugger is open. 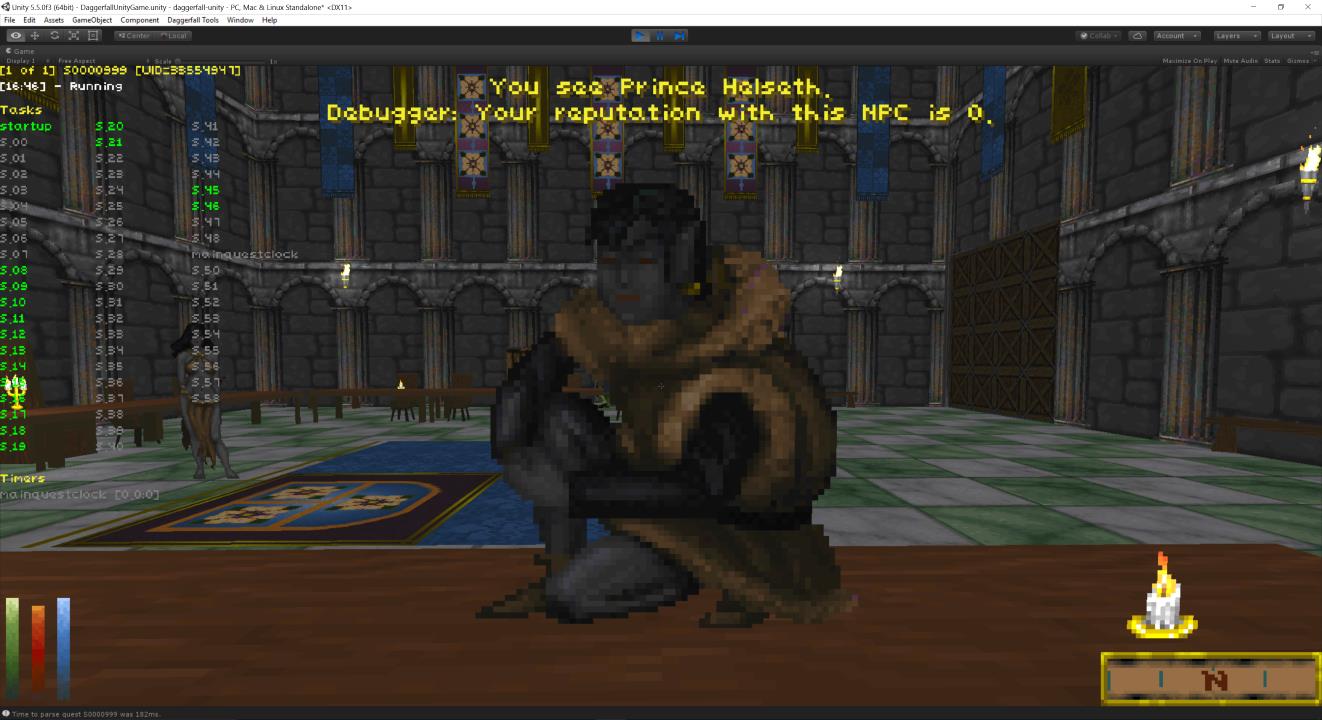 Granted it's not part of standard gameplay, but it might be a good workaround for you. I hear what you're saying, and I agree it would be lovely to have that information on hand. It just falls more into the mod category than something I'd do in the base game.

Have you considered tucking in and trying to build this mod yourself? It should be possible with the systems already in place. Sometimes building something you're passionate about is a great launching point, and you'd be helping others who would appreciate the same data.
Top
Post Reply
20 posts