I hope this will be resolved soon as now I can not finish some quests due to the target in a cage. I can not use magic or bows as my disadvantages.
Top

A perfect implementation of the class questionnaire by @numidium3rd for #DaggerfallUnity. This will be in new builds at end of November.

You have no idea how fun this was to use when I was younger. I rarely even chose the class it gave me; I just loved going through the imaginary scenarios it gave me, since they were so full of life and thought.
Come join Lysandus' Tomb, a Daggerfall Unity fan Discord.
In-progress guide for Quest Pack 1 here.
Top 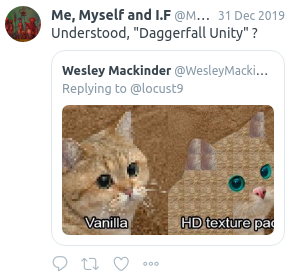 Thoughts, comments?
When a measure becomes a target, it ceases to be a good measure.
-- Charles Goodhart
Top

This is a old one. But in many cases it stands true! I did my best to avoid it

in a world build up from very small tiles it was especially demanding and thus Im even more proud of the results I was able to achieve
DREAM Nexus: https://www.nexusmods.com/users/73250038?tab=user+files
DREAM DFU Forums: viewtopic.php?f=27&t=1168
https://www.guru3d.com/news-story/foldi ... mance.html

Aye, it's obvious to me you're well aware of that kind of issue, and improving stuff with each iteration, so if it was aiming at DREAM I think it's unfair. They're other sources of graphic resources though, and also most people use several at once, which can lead to inconsistencies.
If it's aiming at something else, it should be more precise (but hey, Twitter posts).

While it's a risk with any moddable system, and [sic] think it's rather unfair to what the community produced (or you'll have to be more precise than that to be constructive).

Happy new year everyone!
When a measure becomes a target, it ceases to be a good measure.
-- Charles Goodhart
Top

If someone counters ones years of work with one old image, their argument is not very strong

Aaaand.. stats at Nexus are more valuable kind of feedback. Ppl can have their opinions tho. Usually those who love to criticize the most never really produced anything anyway

Who knows what the msg is and to who it was directed.

Me personally - If it was aimed at my project, I cant care less

The guy's a writer, so hopefully there's more to it than a retwitt (I saw that image before indeed).
I'm always genuinely interested in constructive criticism.
When a measure becomes a target, it ceases to be a good measure.
-- Charles Goodhart
Top

I wouldn't expect any constructive feedback from this person. I doubt very much they even realise that DFU uses the same assets as classic, or that mods are something separate created by different people. They're not criticising DREAM or anything in particular. They're just using a meme to lazily attack DFU for existing.

If you're feeling up to it, you could try to explain to them that DFU looks like classic without mods - especially so with retro mode enabled. You can clarify that mods are created by the community and very much optional if they don't like the appearance of that mod. I honestly doubt this person knows anything about DFU other than some screenshots they didn't like, and maybe they'll be receptive to learning more.

But I've been down that road many times in the last few years. Usually what happens is they double down on their initial position, even when presented with evidence to the contrary. I only recently had someone tell me that retro mode "very clearly isn't rendering at 320x200", when it absolutely is. Just outright denial of something easily verifiable.

Personally, I would ignore this person and move on to something more productive. They're most welcome to their own opinion, even if it's wrong. Like most humans, they'll only change their mind if they come to that conclusion by themselves. Better information will be ignored until they find it independently. The best you can do is not get directly involved and be patient.
Top
Locked
293 posts