Interkarma wrote:Building out quest support for escorts - testing with quest where you rescue NPC from a giant then deliver them to a random store. It's really satisfying to experience different parts of the quest firing properly based on current development state. 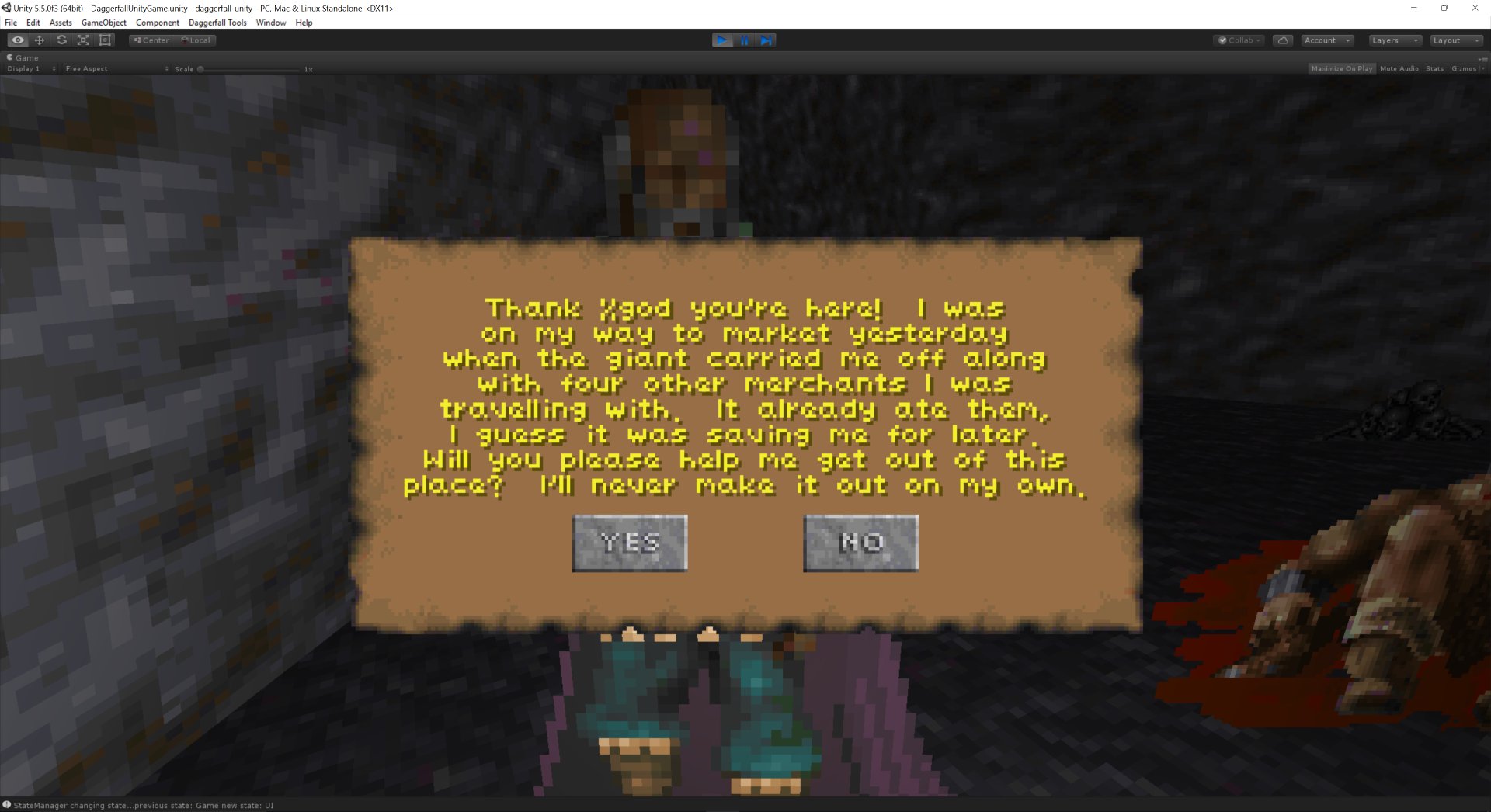 This is a quest you wrote, right? Or was it in one of the custom mod packs? Because I don't remember anything like this.

One of my ideas is to create a form of quests that triggers spontaneously while you're in a dungeon, or at any time outdoors that can lead you to a dungeon. If that's what's being shown here, that is AWESOME.
Come join Lysandus' Tomb, a Daggerfall Unity fan Discord.
See the Daggerfall Unity Wiki on the UESP.
Top

It's one of the Fighter Guild quests, M0B00Y16 (Giant Killing) from CompUSA pack. I trimmed down the quest just to test NPC and Foe placement, and escort return process.

It would absolutely be possible to create a new class of random quest that triggers inside a dungeon. It would need some support in the core first though, as quest resources (e.g. NPCs, Foes, Items) are currently injected when player enters that location. So quest script has to assign those items before the player enters for the appropriate SiteLinks and QuestMarker setup to take place. That said, it should be possible to hot-place these resources in the future once quest system is further developed.

It's pretty much possible to start a quest from anywhere. The only real limitation right now is how resources are placed in the target location.
Top

My idea is to start a global quest upon character creation with no journal entry, that randomly triggers once every 5000-20000 in game minutes which would spontaneously direct the character to a dungeon, shop, etc to start a quest.The quest could cycle in to itself, or gradually increase in difficulty (starting with a random pool of level 1 quests, then level 2, 3, etc as each expires). It's the spontaneity that I think can be a huge pull to create a dynamic world. If I'm thinking right, that wouldn't require anything not already in Daggerfall.
Come join Lysandus' Tomb, a Daggerfall Unity fan Discord.
See the Daggerfall Unity Wiki on the UESP.
Top

Yes, that sort of structure could work. As long as player is outside when quest triggers you could send them anywhere for anything.

One limitation right now (and it's a very small one) is the "start quest" action can only start Sx numbered quests from main story. Side-quests are completely self-contained and don't start other quests. But it would be trivial to implement a new action which could start another quest by full name.

Otherwise, the existing script quest flow could support this, right down to choosing different quests based on level achieved. It would be a fun idea to see in action.

I honestly think we're barely scratching the surface of what could be done. Just the fact you can write quests in plain text and JIT compile into the game at runtime is huge. Add that to an open source modable platform and the scope is practically limitless. And this isn't pie in the sky stuff either - it's almost possible now.

If I were smart I would've already been writing quests for the last several months, just waiting for the moment to compile them into DFU. Honestly, I could've done it already with vanilla if I just had enough dedication to work with Template.

Well, it's never too late

The right time to start is whenever you feel ready.

Once you get the hang of the scripting language, it's a breeze to write quests and spin them up from console. Much easier than compiling back into QRC/QBN format, etc.
Top

Hey Interkarma, I heated unity relised 2017.1 version or something like that.
Top

Biboran wrote:Hey Interkarma, I heated unity relised 2017.1 version or something like that.

I won't be adopting any new Unity versions for a while - they tend to introduce problems that drain my precious time to resolve.

I'd like to return to 5.6 compatibility sometime soon, but I won't be looking at compatibility with 2017 versions for the foreseeable future. The 2017 iteration has just barely come out of beta.

Interkarma wrote: I won't be adopting any new Unity versions for a while - they tend to introduce problems that drain my precious time to resolve.

I'd like to return to 5.6 compatibility sometime soon, but I won't be looking at compatibility with 2017 versions for the foreseeable future. The 2017 iteration has just barely come out of beta.

Ok. I just asking, I'am not very pro in this engine versions. But yeah, current version is more then enough for now 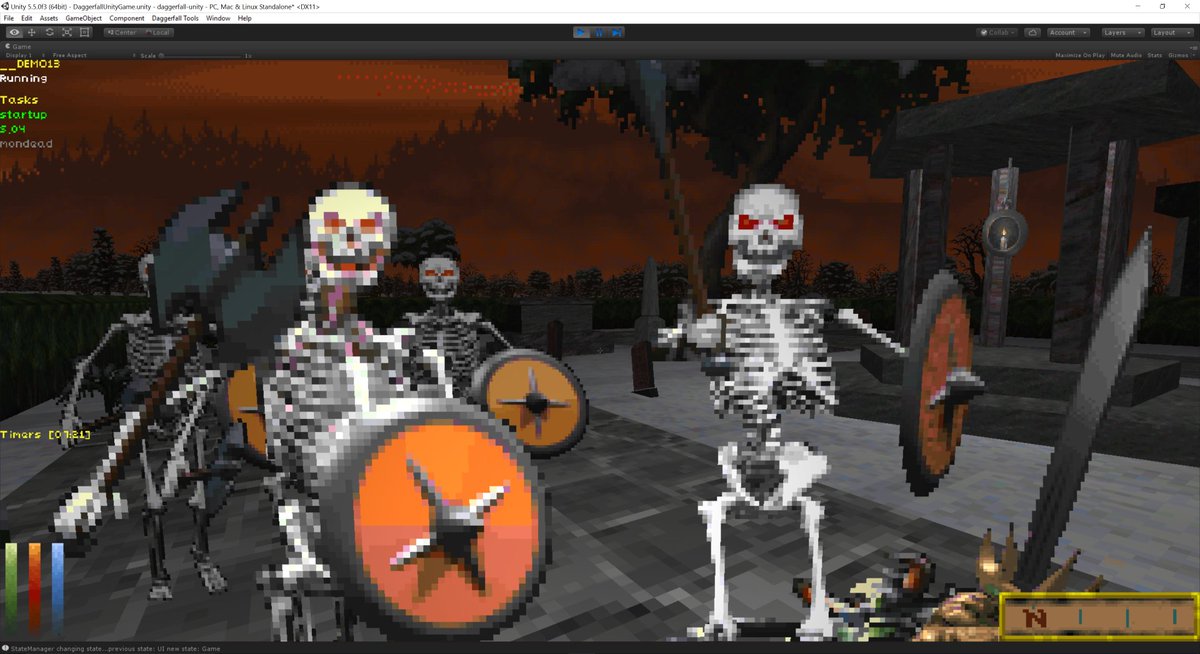 THIS IS AWESOME!!! Could the same feature possibly get implemented in town and shrine exteriors? I'm thinking of a noble giving you a quest to guard a rural home at night. Burglars and Thieves could spawn during that time period.
Come join Lysandus' Tomb, a Daggerfall Unity fan Discord.
See the Daggerfall Unity Wiki on the UESP.
Top
Locked
293 posts