Show off your mod creations or just a work in progress.
Post Reply
60 posts

To be fair, not sure how to feel about their heads. On one hand, the work is superb and these are the best NPC sprites I saw done for Daggerfall, hands down!

But on the other hand, I've always felt that the NPC flats had more charm than the rather generic looking portraits and seeing some characters' heads replaced with the portrait is a little weird. It definitely works for some, especially bearded men, but female flats were definitely prettier than portraits in many case, just in my opinion.

It also looks a bit unnatural on some flats, due to difference between head and torso, like the head was photoshopped to the body (like a weird celebrity fake):

Still, that's just some criticism, which I hope is constructive. I am really in awe of the work done here and especially some flats looks absolutely stunning! The cloth texture is also great on many works, love it!
Top

Nikita, this concern was raised here before - the discrepancy in lightning of body and heads. This is just a 1st pass, if things go well, there will be further improvements

You're doing great there Ravenborn. This looks so good. I hope you'll continue your work and looking forward for the release.
Top

Throwing my two cents here, it appears that the sprites are not corrected for 4:3 aspect ratio when upscaled. 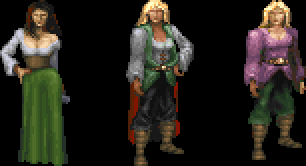 And here's the same sprites corrected to the 4:3 aspect ratio using the method described here: 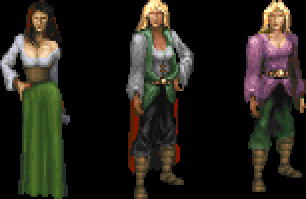 This is what the user would see on a 4:3 display back in 1996. Also notice that the characters' body shape is much more bulkier in the first image, especially noticeable with the figure on the right, while in the corrected image their bodies and faces are lankier and more proportional (more on this here).

I suppose it would be a good idea to take this into account.
Daggerfall clothes & armour fix | DOS Games Archive
Top

Hey, these look nice !
Check out my YouTube Channel!
Top

I agree that on my 16:10 monitor the NPC look more wide than I remember from my 4:5 monitor from 90s.. I saw a discussion about it somewhere on the forums... I hope something will be done about it in the future

solution is not in manipulation with the dimensions of the modded sprites tho, but more likely a general code change somewhere
DREAM Nexus: https://www.nexusmods.com/users/73250038?tab=user+files
DREAM DFU Forums: viewtopic.php?f=27&t=1168
https://www.guru3d.com/news-story/foldi ... mance.html

I suppose that you're talking about this thread.

solution is not in manipulation with the dimensions of the modded sprites tho, but more likely a general code change somewhere

I agree - at least, true source ports like those of Doom or Duke Nukem 3D (and in case of Duke, also the original high-res modes of the DOS version) handle this exactly the same way, that is the renderer draws the scene corrected for 4:3 based on non-corrected "raw" assets.

Yet I assume that if an originally uncorrected image is edited without regard to the proper aspect ratio issue, the result might look off (overly stretched) when handled by the renderer,
Daggerfall clothes & armour fix | DOS Games Archive
Top

Shouldn't the world be drawn with the same aspect ratio as the original world, but showing more stuff on both sides? Or is there some technical difficulty preventing that?

If that cannot be done, as a coder (but not a game dev, so I might be missing something) it seems like the most general and elegant solution would be to have metadata associated to sprites indicating the screen aspect ratio that the sprite is intended for. If it doesn't match the screen aspect ratio, then the renderer could make the correction.

That way, original game sprites (or sprites based on them) could be used, but at the same time, if someone draws an entirely new sprite they wouldn't have to make it artificially "slim" to compensate for correction, but just mark it as a 16:10 or 16:9 sprite, right?
Top

Al-Khwarizmi wrote: ↑
Sat May 05, 2018 4:11 pm
Shouldn't the world be drawn with the same aspect ratio as the original world, but showing more stuff on both sides? Or is there some technical difficulty preventing that?

The problem is that the original world was actually drawn in 16:10 (DOS VGA 320x200 resolution) but stretched to 4:3 (640x480) because CRT monitors are capable of drawing non-square pixels (head here for a more detailed explanation). Hence any modern implementation of the engine using the original graphics must compensate for this on a rendering level, regardless of whether it's run on a widescreen monitor or not (unless it can do a 640x400 mode that will be properly stretched by a 4:3 display).

An yes, in case of a widescreen display the image ideally should be rendered with the 4:3 ratio in mind but using the widescreen capacity, such as what has been done with Shadow Warrior Classic Redux for example.
Daggerfall clothes & armour fix | DOS Games Archive
Top

Thanks for the explanation and the link! I didn't remember old pixels weren't square (and not due to lack of hours playing in old CRTs...).

Then my suggestion would be to add metadata in order to be able to distinguish sprites that were intended for rectangular pixels and need to be stretched in modern monitors (such as those from the original game) and those that are already intended for square pixels (such as new sprites that people may want to create for mods).
Top
Post Reply
60 posts