Hello to everyone!
I've finally finished reworking my intro movie for Daggerfall (The previous version dates back to 2010). Here is the link to the video https://drive.google.com/file/d/1BYOVY3 ... sp=sharing, but I have no skills to put it ingame - I haven't coped with the tutorials here on forum. I would be glad if someone could use my work, and I'm eager to continue working on other movies.
There is another side of the problem - the audio for it was recorded 8 years ago in quite a low quality. I would like to rerecord it, but unfortunately I've lost the background music file. It would be great if someone could help me to find this file on the old DaggerXL forums - they don't work for me now. Or it would be wonderfull if someone rerecorded the music.
Top

Hi rhymer. You need to convert it to ogv, then you can just drop it in the folder StreamingAssets/Movies. See here for details.
Mod System documentation - Learn how to create mods for Daggerfall Unity.
Modder Discussion - General help and discussion for the mod system.
Github Issues - Submit a bug report for the game, including the mod system.
Top

Sorry, but it seems like you haven't understood my problem - I don't need to extract audio from my older video - It is exactly what I have already done. I wanted to rework audio - record voice once again. But I need background music for that. Someone on the old DaggerXL forum composed it for me when I asked, but 8 years has passed since then and I just cant find neither an audiofile, nor the person.


TheLacus wrote: ↑
Tue Jun 26, 2018 12:55 pm
Hi rhymer. You need to convert it to ogv, then you can just drop it in the folder StreamingAssets/Movies. See here for details.

It works! Thank you! Though it statters a little, and a little bit blurry after the format conversion, it works perfectly!
https://drive.google.com/file/d/1l9VqkS ... sp=sharing - Everyone is wellcome to test it.
Top

A stunning remake of the video rhymer - excellent work! I really adore what you do. I just remember your animated main menu with the candle, which is just awesome.

Regarding this video I have found one little "perfectionistic" mistake (it's no real mistake, maybe you did it intentionally?). You added Querty's Note at the end of the text. This is no official content of the Pocket Guide, but one of the Imperial Library's editor comments. So personally I would remove this paragraph to have just the official PGE text included.
Head of the German Daggerfall translation - www.daggerfalldeutsch.de
and German translator for The Elder Scrolls V: Skyrim and Lore-Expert for The Elder Scrolls: Online
Top

Deepfighter wrote: ↑
Tue Jun 26, 2018 7:59 pm
So personally I would remove this paragraph to have just the official PGE text included.

I was maybe not clear enough - sorry for that. It's not about the text/audio of the intro video, which is of course correct. The book itself, where you used the text of War of Betony and snippets of the PGE has in the last paragraph a text snippet where the librarian Querty (of the IL) writes about the PGE and that there was originally a preface and small handwritten notes (see screenshot). That is no official content of the PGE itself. 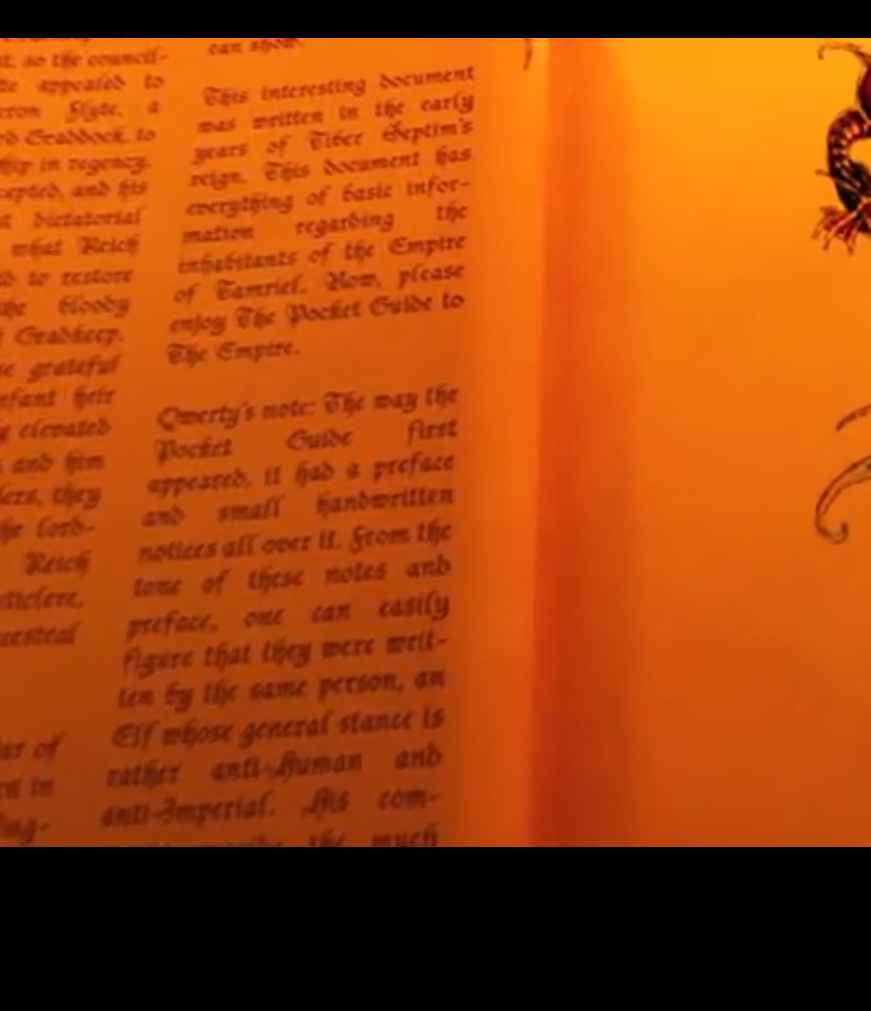 The video is absolutely amazing, but yeah, I agree with Deepfighter. In fact I didn't know about the official text (I don't think I was even able to read that text in the low-res original version of the video, was that even possible in any machine?) but I noticed the name "Qwerty" (with obvious origin on a keyboard) was somewhat immersion-breaking...
Top

Wow, insane quality! So glad you are sill around as your rendering works are top notch!

IF you want to work on it a bit more, I have noticed few things regarding the sound:
1) when the speech starts, theres a small crack cca 0.2 seconds before it starts. This is IMO caused by the fact that the wave is not at zero volume there. You can get rid of it by for example selecting 1st one second and doing the "fade in" effect from zero volume
2) MAYBE the speech could sound a bit better if the bass was slightly reduced.

Oh my!!! I made these textures 8 years ago and never noticed that! Well, I've never read it actually. The bad news is that it took me several months to render the sequence on my PC, so I have no intentions to rerender even that little part which could take almost a week. Let's consider that an easter egg instead.

Speaking about the sound, I've already explained that it is a placeholder - it is a merged soundtrack I've recorded 8 years ago. Since then, I've lost the background music. I'm eager to record my voice in better quality (or, which is preferable, find a native speaker to record his voice for me and get rid of my accent), but I can't do it untill I have a separate music file. That was one oа the reasons I've created this thread - I need help with finding background music for this video. Or maybe someone could simply compose it from scratch - that also would be great!

By the way, if the problem with music is solved, everyone is free to record that text in their native language (I will surely do that in Russian), so that I could make multiple versions of intro for different languages.
Top
Post Reply
56 posts