Off topic discussion. Talk about gaming and life in general. Be awesome to each other.
Post Reply
188 posts

Excellent! Welcome to the forums!

I've searched for this thread but not enough it seems, thanks Interkarma for the redirection, and a huge congrats for this amazing project

I tried to play Daggerfall in 1996 from a demo disk by Joystick french newspapper, but my Pentium 75 didn't ever managed to worik it right at the time. I had to wait Morrowind to finally play a TES game, putting several hundreds hours in it. Didn't played Oblivion that much, too "conventional" to my taste and didn't wanted to lost myself again. Then Skyrim came and in a blink of a eye, hundreds hours passed by too.

I've waited till december 2017 to play Daggerfall at last, when I realized I got it free from GOG. Played all the main quests until I was stucked with Stronghold of the Blades, didn't received the letter. By frustration, I get back to Oblivion and played it all, including DLC and now mods!

As for myself I'm a professionnal UI/UX designer in the game industry for a french studio. Mainly working on Unreal Engine, but if I found some time I'll be glad to help.

Also I've been in touch with Pieces of 8-bit, who made a wonderful remake of the whole Daggerfall soundtrack, maybe I'll try to made a mod of it for DU. Check his work: https://www.youtube.com/watch?v=YRjHhsU ... pU4dYqwVP0
Top

I played Daggerfall in 1996, but got lost in the immensity of the world and spent too much time doing side quests to ever get far in the game

With this amazing project, I might just get into it again

Daggerfall was my second Elder Scrolls, after Oblivion introduced me to the series. I was blown away by the sheer ambition of the game, ambition which frankly probably exceeded the limits of what was technically possible in 1996.

Playing Daggerfall Unity feels like coming home. Hats off to you all!

Welcome to the forums Alyndiar and comradepollux, and thank you both. 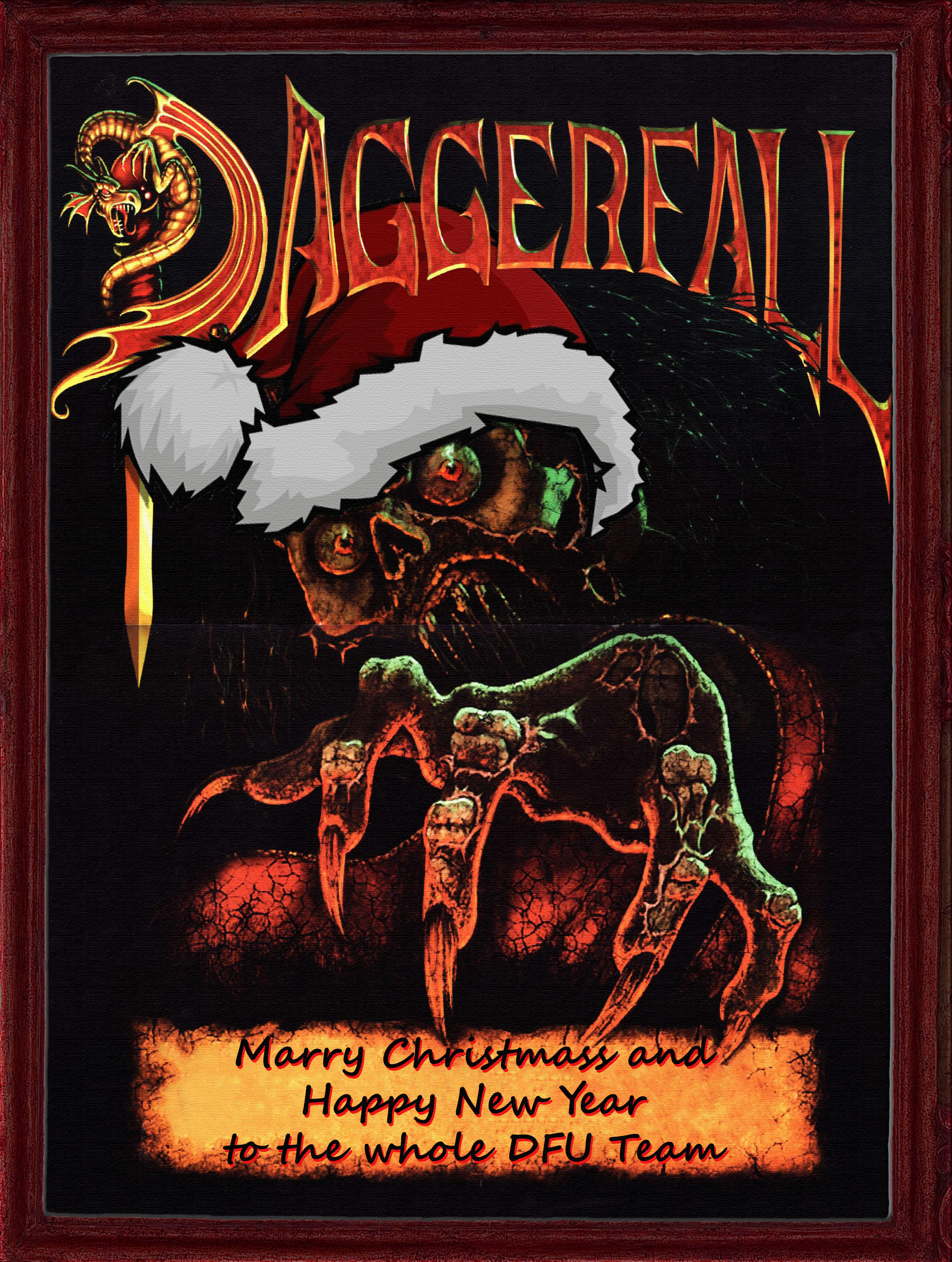 Always happy to see that cheerful face! Merry Christmas everyone.

I played Daggerfall in 1996, but got lost in the immensity of the world and spent too much time doing side quests to ever get far in the game

With this amazing project, I might just get into it again

I don't play Elder Scrolls games for the main quest...

Anyway, Merry Christmas, everyone!
Previous experience tells me it's very easy to misunderstand the tone, intent, or meaning of what I've posted. If you have questions, ask.
Top

Season's greetings to all!

I have been playing Daggerfall on and off for the past ~8 years and have always been fascinated by the sorts of fan projects that the game has spawned. It just amazes me how one relatively unknown PC title from the 90s can have such a tight-knit community full of people who love and appreciate the game, let alone still play it. To me, this goes to show just how well Daggerfall has aged despite its flaws.

This board has a really cool vibe and I hope to get involved in a few neat projects somewhere down the line. I also happen to be in the very early stages of developing a DOS-like first-person adventure game, and would welcome any suggestions or comments from anyone who might be interested.
Top

Welcome to the forums winston.