Talk about the mods or features you'd like to see in Daggerfall Unity. Give mod creators some ideas!
Post Reply
22 posts

Jay_Hs mind is infinite, I will look thru this as well. Thanks Jay, this is one deep well of ideas!
DREAM Nexus: https://www.nexusmods.com/users/73250038?tab=user+files
DREAM DFU Forums: viewtopic.php?f=27&t=1168
https://www.guru3d.com/news-story/foldi ... mance.html

Thanks guys. I actually stopped posting due to my conclusion that nothing in this post will ever happen

And some of the ideas are really quite strange looking back on them. If they give anyone any inspiration, go for it!
Come join Lysandus' Tomb, a Daggerfall Unity fan Discord.
In-progress guide for Quest Pack 1 here.
Top

I really like the idea of food vendors. I also had this idea in reference to an expanded commerce add-on. The idea would be that at the beginning of the day, carts would spawn outside the city gates and make their way to the town square and similar areas. The number and size of the carts would be determined by the number of people to feed. Large cities would have a large number of good quality carts.

Here is how I envision the system working. Commercial areas of towns generate a zone that attracts commerce. Let's say you have a door to a shop. That door generates a zone of commerce that radiates around it sort of like a light. The further you are from that shop door the less commerce it radiates. Of course other shop doors also radiate this commerce. So in an area with plentiful shops there will be a lot of commerce. This will attract vendors selling food as they wish to be where people are shopping. Food vendors themselves generate some commerce.

The way this should work when put together is that higher status carts will position themselves near but not too near a shop or shops in prime locations. Smaller carts will position themselves somewhat further away but will try to remain within sight of as many shops as they can manage. Small vendors may cluster together due to the fact they have small exclusion zones and they can ignore some of that exclusion. Larger vendors can cluster (again because they can ignore significant exclusion) but may not depending on the availability of prime spots. Exclusion is two way. High status carts want to stay away from low status as well as the reverse.

Carts depart after selling off their goods or as the day becomes late. Walkers buy from vendors in their vicinity. A walker with a higher class is more inclined to by expensive goods while lower class walkers are the opposite. The total amount of food sold is determined by the total number of purchasers and the number of vendors as well as the commerce at a location and the skill of the vendor. The number of unserved houses nearby may also affect sales.

A vendor that sells all his goods will over time increase in status. The opposite is true for a vendor who sells few goods. This means that a prosperous city like daggerfall or wayrest may have many high status vendors and any low status vendors will locate to less desirable areas of the city.
Remember always 'What would Julian Do?'.
Windows 10 Pro 64 bit. DFU Ver. Alpha 0.10.7
Top

Sounds like you've put a lot of thought into the vendors. I like the idea of how to place them; it reminds me a bit of the laws of magnetism- very clever!

If we concentrate the townspeople more densely in these vendor areas during sensible peak hours, add a looping crowd ambient sound whose volume is proportional to the number of citizens in the area, and put some ruts in the ground to simulate the effect of a lot of recent foot traffic, I think we'd have a whole new level of immersion in towns.
Top

I was here first! Blame jayhova for the similar names!

You could blame my mother.

I used to be the only Jay Hova on the Internet. Then some rapper swiped the name. You might think that he (JayZ) could claim to be the first Jay Hova on a record, but that was also me. Jay H certainly has very well thought ideas.

Clearly, Jay H has been here a while. Was he the first to play Daggerfall? I started playing when I had to put a piece of tape on the white side of the CD because the silkscreening caused the disc to be out of balance and bethsoft QC had not caught that yet.
Remember always 'What would Julian Do?'.
Windows 10 Pro 64 bit. DFU Ver. Alpha 0.10.7
Top

No, not the first, though I started with the Betony demo, so that's going back awhile. For years and years I called myself Daggerfall's biggest fan, and was completely convinced until I met Interkarma and Allofich

Can't beat either of them for dedication, nor others here on the forums either.
Come join Lysandus' Tomb, a Daggerfall Unity fan Discord.
In-progress guide for Quest Pack 1 here.
Top

I wanted to create an illustration for my previous post. Not all the areas are done but hopefully enough to illustrate the idea. If it is not obvious, there is an area around the doors of each shop that marks the exclusion zone. Unfortunately the image does not adequately illustrate the cumulative effect of multiple shops.

The attractiveness of any particular area to a vendor is determined by it's line of sight distance from the door to a shop using something like the inverse square law. All doorways (along with residences) generate exclusion zones and negative numbers just outside those exclusion zones again falling off using the inverse square law. Think on this as a law that prevents vendors from interfering with traffic by getting to close to a door and blocking it and annoying residents by setting up near their house. Less desirable vendors will want to stay out of trouble by not antagonizing the locals by getting to close to these boundaries. More acceptable vendors are less constrained. 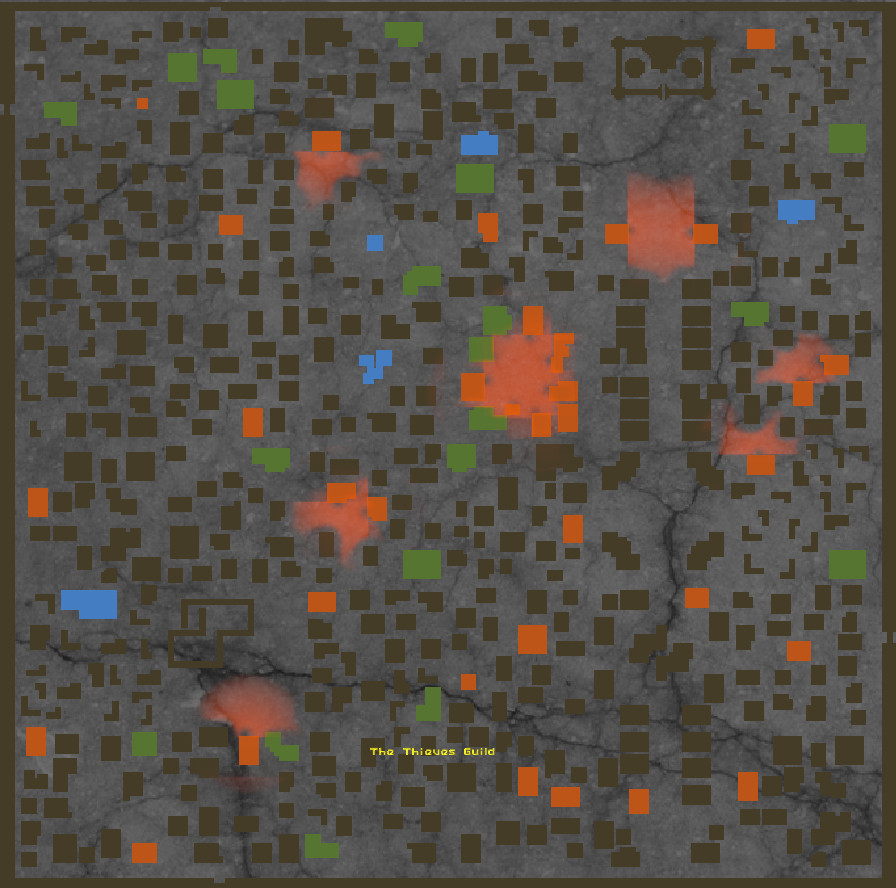 *Psst* You left your guild visible.

Sorry that should read The Lollipop Guild