A curated forum for approved mods. Users are unable to create new topics in this forum but can reply to existing topics. Please message a moderator to have your mod moved into this forum area.
Post Reply
52 posts

Ill add up to the praises, its really nice mod, I like it.

The handheld torch light changes things a lot, I might experiment with the colors to match em to my prefference, but since this option is included, its all just great!

Ive added it to the recomended mods for a DREAM

This looks beautiful, but I have two little issues / questions.

The light in the next hallway should not be present. It only appears when I'm positioned within a lit area, it's brightness is directly tied to the brightness of where I'm standing. This seems like a pretty global thing. Might be hard to see without expanding the image. 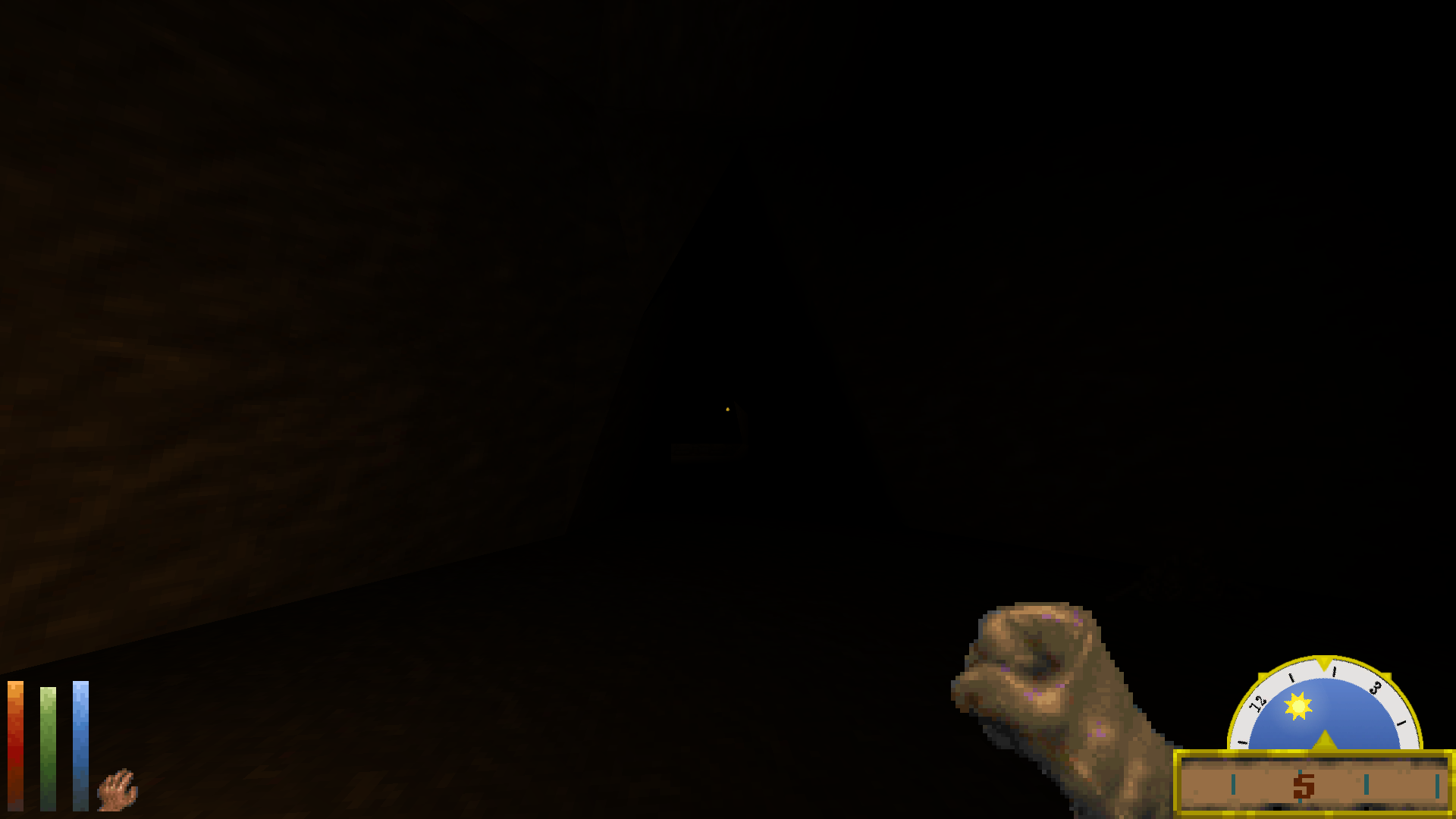 
Admittedly this is probably only noticeable with ambient light down at zero, and I can just disable the mod in dungeons, so probably not a high priority thing if it's even fixable.

Also, just out of curiosity, why were flickering player torch lights considered a bug? Did the script just not work properly? It would be a perfect option when combined with item-based torchlight.
Top

Mummelpuffin wrote: ↑
Sat Aug 17, 2019 4:51 am
This looks beautiful, but I have two little issues / questions.
Also, just out of curiosity, why were flickering player torch lights considered a bug? Did the script just not work properly? It would be a perfect option when combined with item-based torchlight.

Hey, thanks a lot for pointing that out! I've tracked down the problem, but unfortunately I'm not sure if there's much I can do about it. Basically, because of either the Unity engine itself, or how the Daggerfall Meshes are combined, the light is leaking through from another nearby floor into that hallway - you can see the what's going on in this pic here: 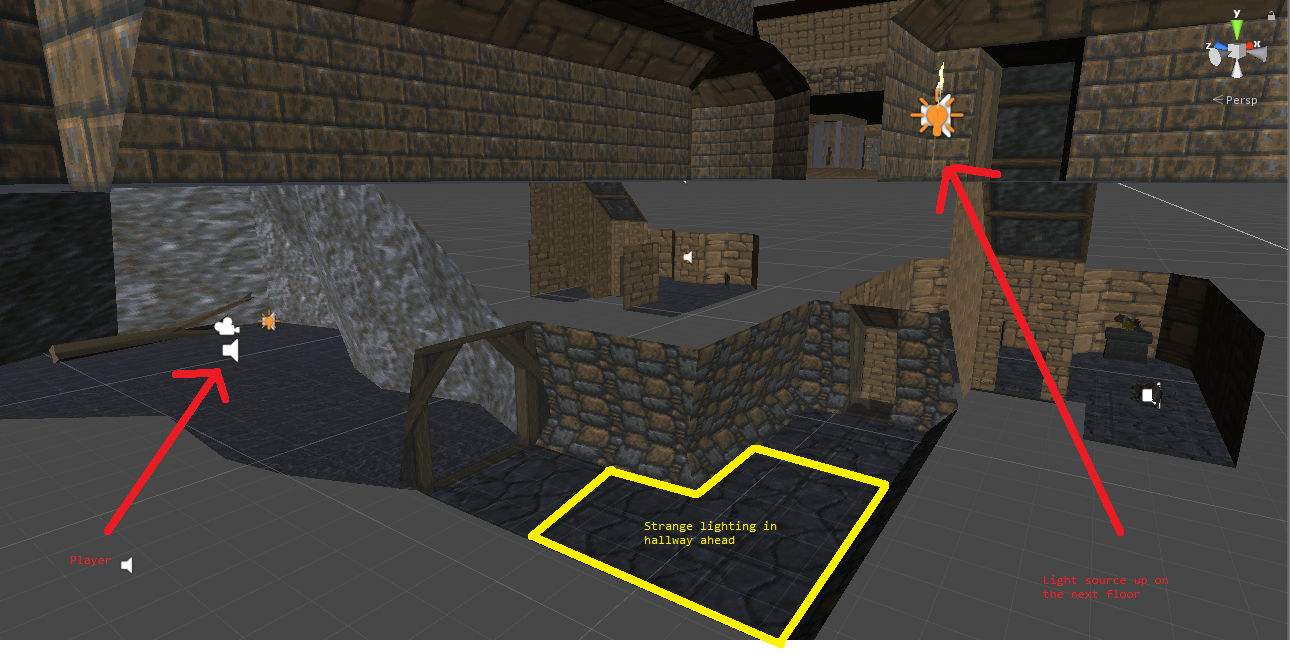 
As for the player torch flickering - I originally intended to have it, but the way flickering code works is it fluctuates the intensity level of the light. The problem here is that the light intensity is already being used in calculations by Hazelnut's player torch implementation, and how it gutters and gets weaker the longer the player has their torch burning. Basically before I add any kind of flickering to the torch, I would need to first make sure it worked in harmony with Hazelnut's player torch and not mess with any of the intended intensity levels.
Top

How do the DFU advanced lighting settings interact with the mod settings? Ex. If I enable shadows in the mod but turn them off in the advanced settings or vis a versa which setting takes precedence?
Top

Just a observation - IMO its quite good to make the player torch default (as this mods gives us the option to do it) - having the player torch orange changes the game too much. While in theory, the orange player torch should look better than a white one (and I requested the orange torch be4 this mod even existed) - in praxis, its not good IMO. So.. my recomendation is to switch this particular option to default to get best visuals.
DREAM Nexus: https://www.nexusmods.com/users/73250038?tab=user+files
DREAM DFU Forums: viewtopic.php?f=27&t=1168
https://www.guru3d.com/news-story/foldi ... mance.html

I dont know why, but in recent DFu update, this mod causes black screen after I load into the dungeon.
When I disable this mod, it always solves the problem.

Not sure if its this mod or its interaction with other mods I use :X

And its not even all the time, sometimes it works, other times I get black screen...

For me the mod is working just fine. I am using a few of the released mods, all in their most recent version (DREAM, Enhanced Sky, ...). I have not messed with any post-processing effects.
Top

Played for a couple of hours and no problems.
Top

I'm actually running this on a lower end/non gaming pc. At first I was worried it would make my game run a little slower but it doesn't seem to affect it all. At first I thought it actually made it run a little smoother but that's probably in my head.

I hate to be THAT person but..

Im 100% certain this mod with a dream combined is causing me a bug. EDIT: I even found the solution to this, its described bellow

Only dream mod - no bug.

Than I enabled Improved light as well and BAMM I got the bug immediately.

To reproduce. I 1st load a save somewhere outside. Than I load a save in a dungeon. And this results in a black screen. A can turn around, I see the compass moving. When I press ESC I can see the options tab and I can suddenly also see the 3d view in the background. The game works, sound works, I just cant see anything untill I press ESC.

I had one save in the dungeon by the exit. So I managed to click the exit and I appeared outside and I was able to see...

It also messes up the saves. And when this bug appears, you can no longer load.

So its a bit complex situation :X

I will add these two saves:

1st is outside in the winter - load it

Than load the 2nd one in the dungeon:

No idea what is happening

1st is called WITH BUG. Thats DREAM and Lights mods.
I start the game, load 1st save outside, 2nd save inside, get black screen and exit the game¨

2nd is called WITHOUT BUG. Thats just a DREAM mod
I do the same - start game, load game outside, than inside, all ok, exit


I think this part is describing the bug:

Lol... so there it is. Im quite proud of myself now