A curated forum for approved mods. Users are unable to create new topics in this forum but can reply to existing topics. Please message a moderator to have your mod moved into this forum area.
Post Reply
1671 posts

I hope this will get open some time soon...

You should create a thread about it in a proper forum section, thats the way to get it done. Modmakers cant do anything...

I miss the jumping sound for example... and theres just tons of sounds which would make the game feel more alive and which are missing now.

Thanks, I've followed your advice and created a dedicated topic

I've been recreating Daggerfall's title screen in Blender for the better part of a day. I ain't the best modeller, but I think it's turning out somewhat decently. Thoughts?

AmmoniumDichromate wrote: ↑
Thu Sep 12, 2019 9:03 am
I've been recreating Daggerfall's title screen in Blender for the better part of a day. I ain't the best modeller, but I think it's turning out somewhat decently. Thoughts?

Looks really good. One critique: the scrolls all have a dark outline on their edges, even the one on the side. Is it possible to remove that and rely on shadows?
Top

Well its nice but upscaled original is better to me. Maybe with more work it can get there tho.

What Id change:
The black outlines mentioned by Adrinus.. and the table wood texture is repetitive in some places
The perchament looks a bit too much flat to me

You deffo can pul out nice results, but this specific screen is quite good on its own IMHO

Heres what I use for now, for comparison:
Spoiler! 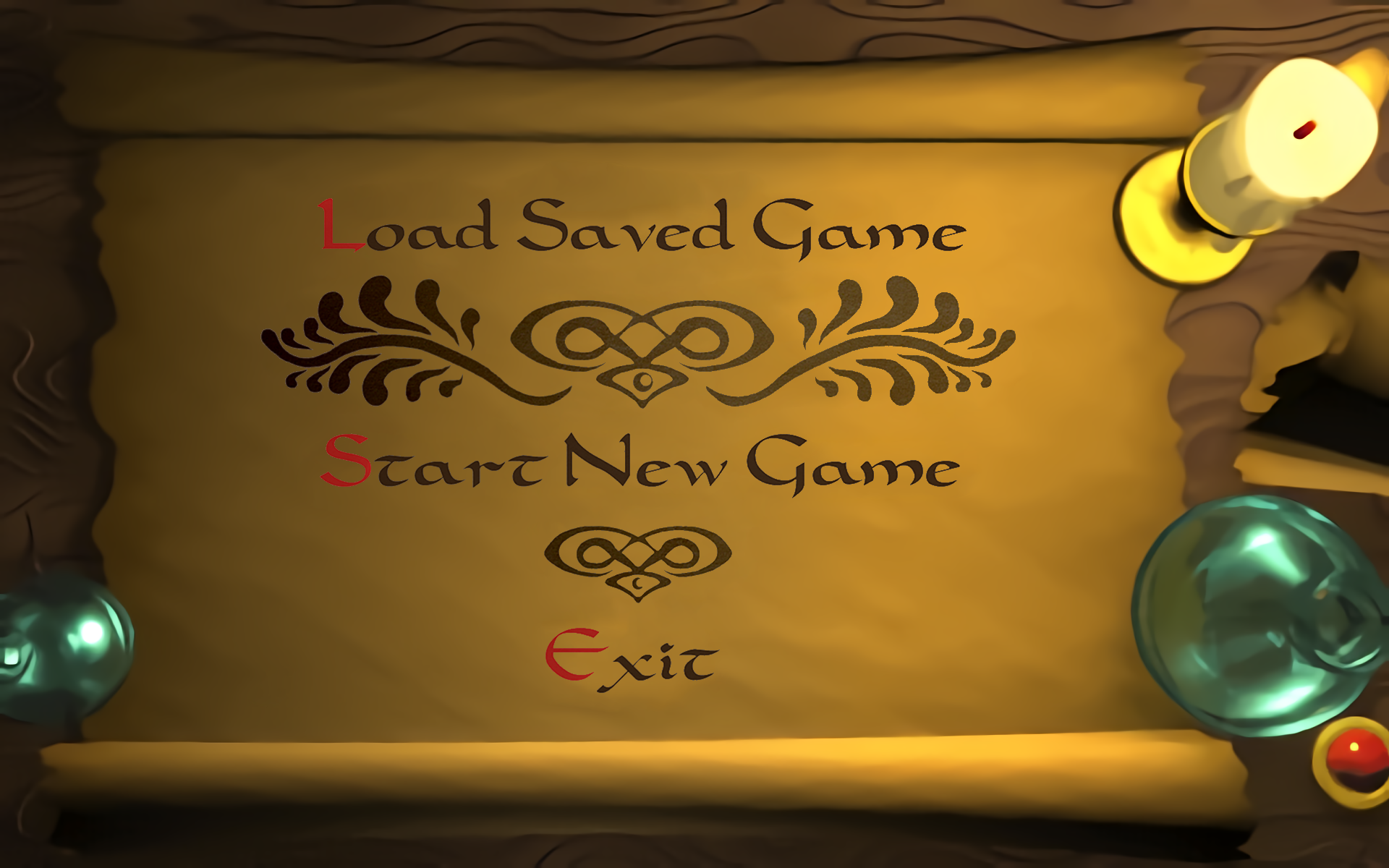 Adrinus wrote: ↑
Thu Sep 12, 2019 11:15 am
Looks really good. One critique: the scrolls all have a dark outline on their edges, even the one on the side. Is it possible to remove that and rely on shadows?

My goal with the outline was to make the paper look a bit burnt on the edges, but I was never particularly happy with the results. I didn't entirely remove the effect, but I did massively tone it down in a later iteration.
The only way I can add a potent shadow to the scroll is to make it float above the table (which it seems to be doing in the original title screen), or by lifting the edges of the scroll that aren't under an object, can't do that until I rework the scroll's text into a texture rather than a decal.
Also I would need to make the candle brighter for a decent shadow to cast on the left side of the table, but If I make it too bright the candle looks like an exploding sun. The lighting is the thing I've been messing with in this scene the longest and I just can't quite pin down the right look without ruining some other details. It's a bit frustrating.


King of Worms wrote: ↑
Thu Sep 12, 2019 3:25 pm
What Id change:
The black outlines mentioned by Adrinus.. and the table wood texture is repetitive in some places
The perchament looks a bit too much flat to me

Funny that you mention the the wood texture, it is just a picture of my desk that I took with my phone, didn't tile it or anything. I guess now that you mention it the pattern on my desk is a bit repetitive...
The frustrating thing is that the perchament thingy is quite round, maybe even too round for what it's suppose to be, but the lighting doesn't accentuate that roundness particularly well. I've exaggerated the dimensions further in a later iteration, but it doesn't seem to help all that much.

Personally I like this new render better than the original. But that's just my 2 cents. Maybe try to give the lighting an orange/yellow color? That would be more true of candle-lights. There could also always be a theoretical light-source out of frame: say from another candle behind or off to the side of the view? Play with it and see if you like any of the shadows better.
Top

I would tune the light and added shadows in Photoshop. I think its easier than setting up the whole scene
And now I know what is strange on that paper... its too smooth, like to shiny and too reflective... something is off with the material to me

Ps: yes, your desk looks strange, get a new one so this render looks better ,)

Apologize if I'm coming of a bit spammy, just wanted to show off a few final-ish tweaks. Guess I still need to find a better wood texture... or desk.
Here's another test render:
Spoiler!
*

I like it better than the last two, but try to match the color of the original lighting: more orange-ish than that.
Top
Post Reply
1671 posts