May he rest in peace.

It's that Akatosh Chantry, it's evil! Whoever put that place together is a maniac

I was lost in there earlier this week trying to rescue the cousin of an innkeeper, never found her, just plenty of spiders and skeletons.
Top

I'm not saying this is incorrect or anything, but the DFU character thread exists for a reason

Doh! Well, any admin feel free to merge this into that thread

Since you're not playing IronMan, you could still cure the disease via console. In this situation, I wouldn't consider that any more cheating than loading an old save.
Top

jedidia wrote: ↑
Thu Oct 17, 2019 1:28 pm
Since you're not playing IronMan, you could still cure the disease via console. In this situation, I wouldn't consider that any more cheating than loading an old save.

True, but I only use one save to force myself to live with my choices. That would feel like cheating

I consider it a learning experience to never go without some way to cure poison. Looking back I should have bought or made a magic item with cure poison.

Speaking of console commands. I went back to my old character who got stuck being a werewolf since there's a bug in the current build that kills him when lycantrophy is cured. I used godmode to survive this and picked up playing him again.
He has no magic at all, so I'll be even more reliant on potions.
He'll probably wind up dead to poison as well

What I realized too late, is that even though my character could cast Recall (but it took all my mana), he should have had a recall potion for emergency evacuation.
My released mods

This is Sir Wolfhart, the Breton Crusader Of Stendarr.

He was made with the RP concept of being a member of the Stendarr knight order The Crusaders. I based his skill selection on a blend of Stendarr Temple skills and Knights Order skills.
Although I made a custom character I decided to adhere to the race rules, so I simply gave him the standard Breton modifiers:
+10 Int and Will
-10 Str and End
In addition, to make it interesting, I made him an anti-magic character. He has no ability to use magic and extra resistance to magic.
As a holy warrior of Stendarr I decided he would never wear, or even pick up, deadric items. Looking back, I should have included Ebony as a forbidden material as well, since Stendarr is the enemy of Ebonarm the wargod.


I've had a lot of fun with him but today he finally laid Lysandus to rest and gave the Emperor the Totem.
Now he just needs to earn enough gold to settle down in a modest home near a temple of Stendarr. 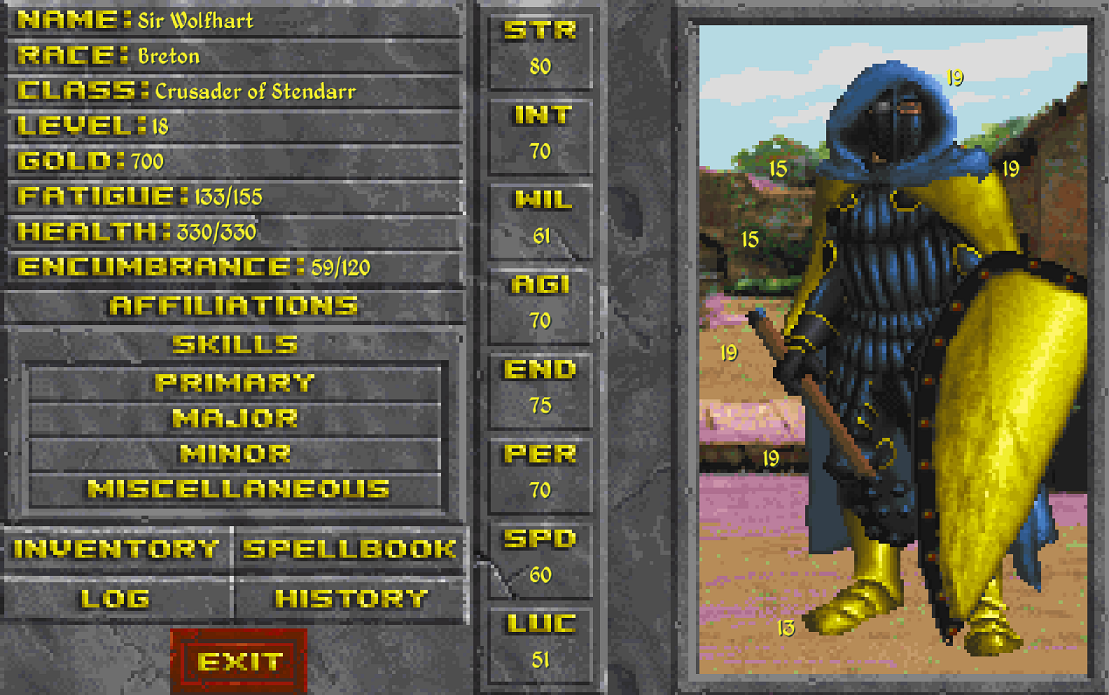 The only quest he has left.. is finding a pair of mithril boots. Seriously, not one shop in Tamriel seems to stock them!

Mythril is easier to find than Ebony...
Check out my YouTube Channel!
Top

My DFU avatar. A combination of images, the stats window captured today, the ragdoll window roughly a month-and-a-half ago. As I'm sure you've noticed, his name and class are a bit wonky. That's due to me goofing up during creation, noticing my mistake right away, then forgetting to correct it until too late. Funny thing is, I'm no longer 100% sure which of the two was intended to be "Decrepit," if either. 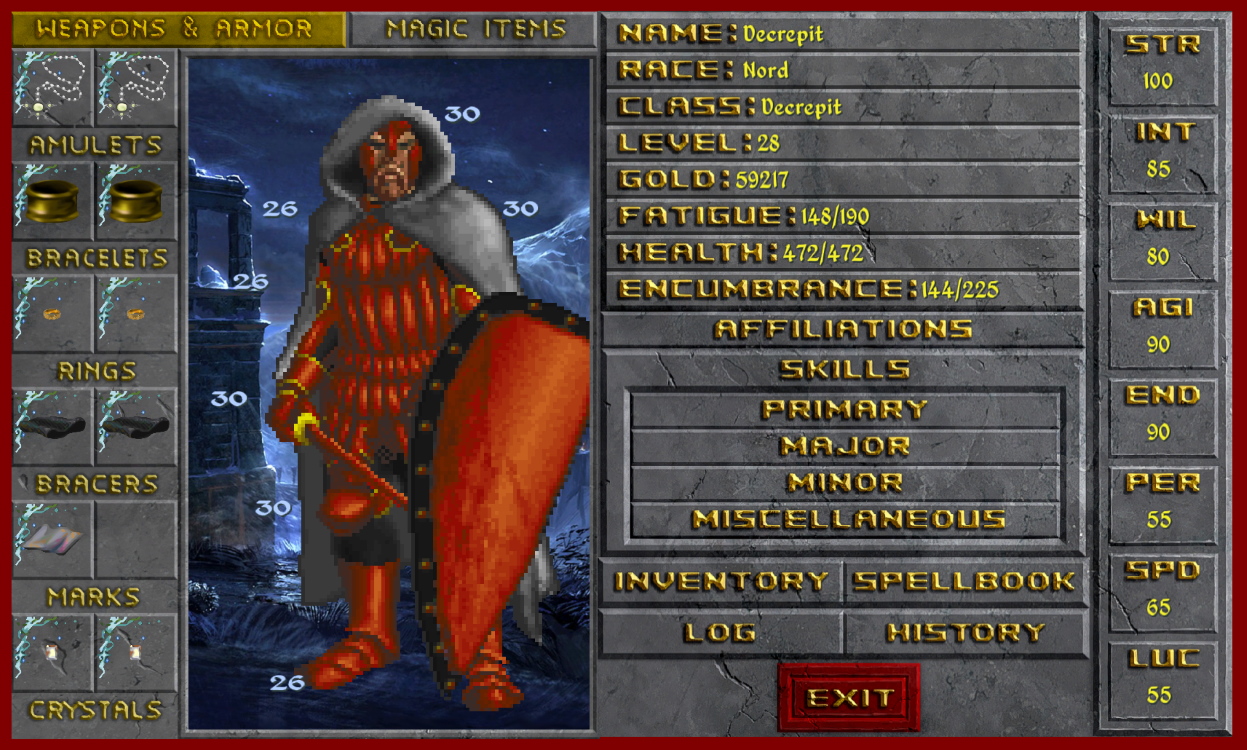 He's a very long-running character, played off-and-on for years, transferred to DFU several months ago from a DaggerfallSetup.exe installation with almost all its bells & whistle enabled. I'm happy to report that that transfer was a success, the one downside being the loss of his Daggerfall City home, stuffed with valuable loot. As his bank account survived intact, this wasn't as big a deal as I initially feared.

He completed almost the entire MQ line(s) before transfer, lacking only its final 'dungeon.' I'm in no hurry to see him tackle that. In fact, playing Daggerfall off-and-on since it was new and shiny, no avatar of mine has ever finished the MQ. My very first 'serious' DF character came nearly as close, progress ended when I became hooked on MMOs during 1997. (I'm now cured of that affliction.)

The image largely speaks for itself. What you don't see is that he's reached top position in the four organizations of which he is a member: Fighters Guild, Mages Guild, Knights of the Dragon, Temple of Kynareth. He possesses quite a few self-enchanted items, many of which boost his magical abilities, which are (deliberately) sub-par otherwise. Despite what the ragdoll implies, he's a blunt-weapon specialist. Having maxed blunt long ago, he now prefers long-blades except when wielding two-handed weapons.
Top
Post Reply
42 posts