Pango, to summarize your above notes (to ensure I understand):

The durability of items with "when held" enchantments is only reduced in two situations:
1) When you rest/loiter for at least 6 hours and 1 minute (but not if you roam the game world for that same period).
2) When you re-equip the item.

In addition, the enchantment effect is rerolled/reapplied in the above two situations, and also when you fast travel (although the item's durability is not reduced upon fast travel).

Is the above correct according to your testing so far?

Also, IK, what is the bug here? Sorry for all the questions; just my usual curiosity!
Top

This isn't currently implemented in DFU. I'm much less likely to lose track of here, as I say above.
Top

Oh, didn't realize this wasn't in yet - got it.
Top

Since special things happen while you're loitering or resting, I also tested what happens when you're awake, doing nothing but enjoying the sun and fresh air near the Castle of Daggerfall:

So yeah, clock is ticking, my plate is losing 1 HP every 4 minutes!

Must be why I counted 27 HP instead of 26 HP a few times in the beginning, I wasn't fast enough at saving game.

The durability of items with "when held" enchantments is only reduced in two situations:
1) When you rest/loiter for at least 6 hours and 1 minute (but not if you roam the game world for that same period).

It's actually simpler than that; Because, contrary to common belief, rerolling does not seem to degrade your items, you can consider the two phenomenons (decay and rerolling) totally separately.

Consequences: you shouldn't unequip "when held" enchanted items just for loitering/resting less than <equip degradation cost> hours. If we don't find much lower equipping degradation costs than 20, that means you should typically keep your items for loitering or resting until healed. I'm not sure osteopaths agree

Not applying any decay during fast travel is actually nice. Not decaying would normally only happen if you unequipped the item, but since you have it equipped on arrival the item should have decayed by the re-equipping cost.
Players not using fast travel (say, using Tedious Travel) will have to be very careful with "when held" items, probably unequip them ASAP unless they don't care about the item at all. Even for random encounters, it's probably more efficient to re-equip your items only in case of tough encounter.

Effects are rerolled at the end of loitering/resting/fast traveling if more than 6 hours have passed since the last reroll.

This is not done to implement items decay, but just to make sure items give you varying magnitudes over time (within their magnitude range). It should be noted that equipping items does not seem to count as a reroll, so if you equip an item just before loitering/resting, the effect can be rerolled again. Re-equipping until you get a good roll can only be valuable at the beginning of a long working day

By the way thanks DaggeD! 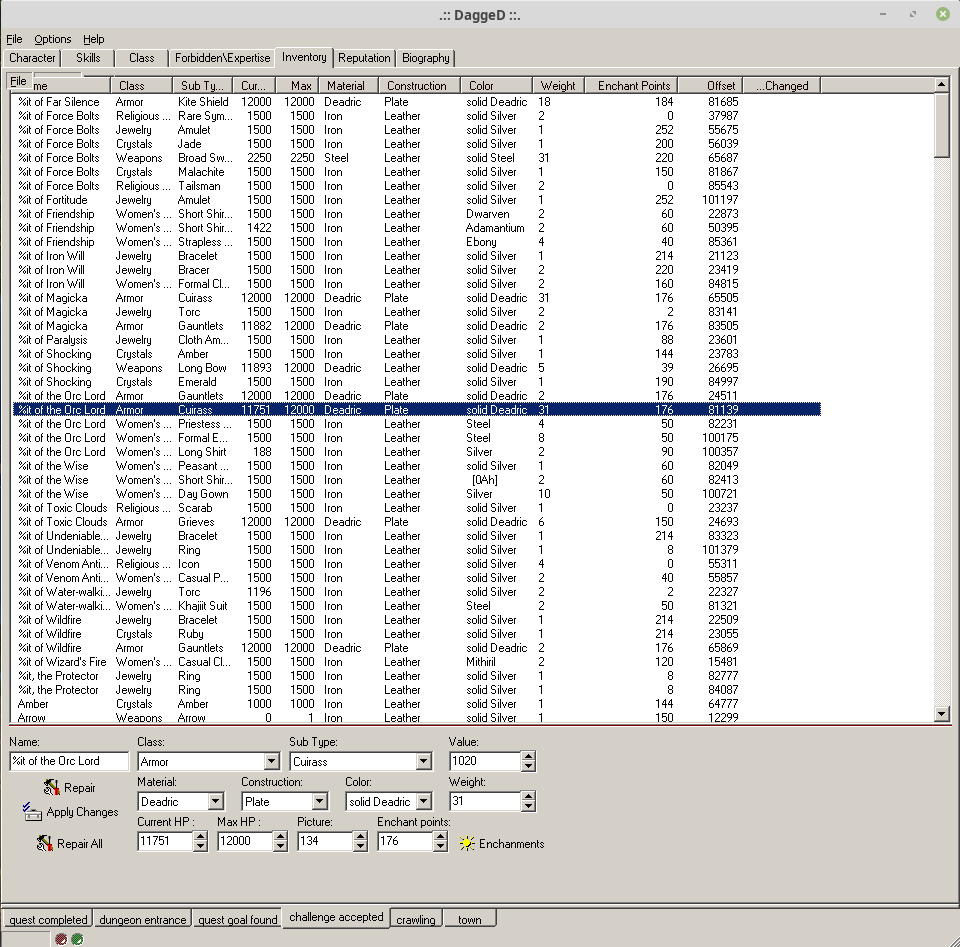 Great stuff! This is one area I've been hoping to come back to and fix on the classic wiki for a while. With that in mind, having another read of the wiki, I humbly request of pango a little more testing and confirmation of the below two points (you may have already tested one or both of these points, but confirmation will be much appreciated):

1) Are "when held"/"when strikes"/"when used" enchanted items made through the Mage's Guild/Temple of Julianos item maker service subject to the same durability degradation rules as similar enchanted items found in loot/as quest rewards/at magic item merchants with the same enchantments?

2) Do "when used" or "when strikes" enchanted items made through the item maker service with more than one enchantment degrade at a rate of (10 points x number of enchantments) per use/strike, or only at 10 points total per use/strike?

I know this isn't a wiki topic, but FYI I did update the UESP pages with pango's testing data (https://en.uesp.net/wiki/Daggerfall:Magical_Items and https://en.uesp.net/wiki/Daggerfall:Enchanting_Items). I still don't know the answers to my final two questions in my post immediately above (again, I'll be unable to test classic DF for some time), but for now, I've assumed that all Item Maker enchantments (for enchanted items created through the Mages Guild/Julianos Item Maker) and corresponding non-Item Maker enchantments (for enchanted items found as loot/quest rewards/at merchants) operate identically in terms of durability loss.
Top

For the moment all the items I've seen (dungeon loot, item maker) start at max durability, but I've yet to create exact same items from different sources to compare them... Maybe I should have started with the second question
Last edited by pango on Fri Nov 15, 2019 7:10 am, edited 1 time in total.
When a measure becomes a target, it ceases to be a good measure.
-- Charles Goodhart
Top

I was doing some tests with this too (over here,) but then I made the mistake of not backing-up my original saves and after fiddling with the save editor, I managed to bork them to the point that when I try to load them Daggerfall crashes.

So I lost faith in humanity again, thanks to Daggerfall

I'd had to rollback to a point before I edited my save so I was able to equip some of the items I needed for the tests (I had only chain and leather allowed on my original character...)

Also, during me trying to grind MG rep to be able to enchant the items I ran into a different bug that made me break one of the MG guild's quests... again with no save backups to go back, without losing some hs. of progress

The truth is, I was counting on having vacations soon so I can dedicate some time to do these kind of time consuming tasks, but I had to postpone my vacations for some time.

On topic: My observations in that thread seem to match your own, all but except the actual decremented values on-equip... I'm almost sure it's dependant on the enchant type and I was wanting to have access to enchanting so I could try more wide array of items!

Also, on the decrement on travels, I observed some decreasing of quality on them, but I wasn't able to figure out a pattern... I suspect it's related to the game considering some of the time passed as resting or loitering instead of travel.

I intended to try to reverse engineer FALL.exe to check that, but for the life of me I couldn't find my copy of IDA Pro that I had from the past to re-install (different computer, been ages since I used it...) and I'm not totally sure there's a version available that has features enough to be able to be used like the Pro version.
Top

Unfortunate to hear your setbacks

Thanks again Pango! I believe I have everything I need to get this into game now.